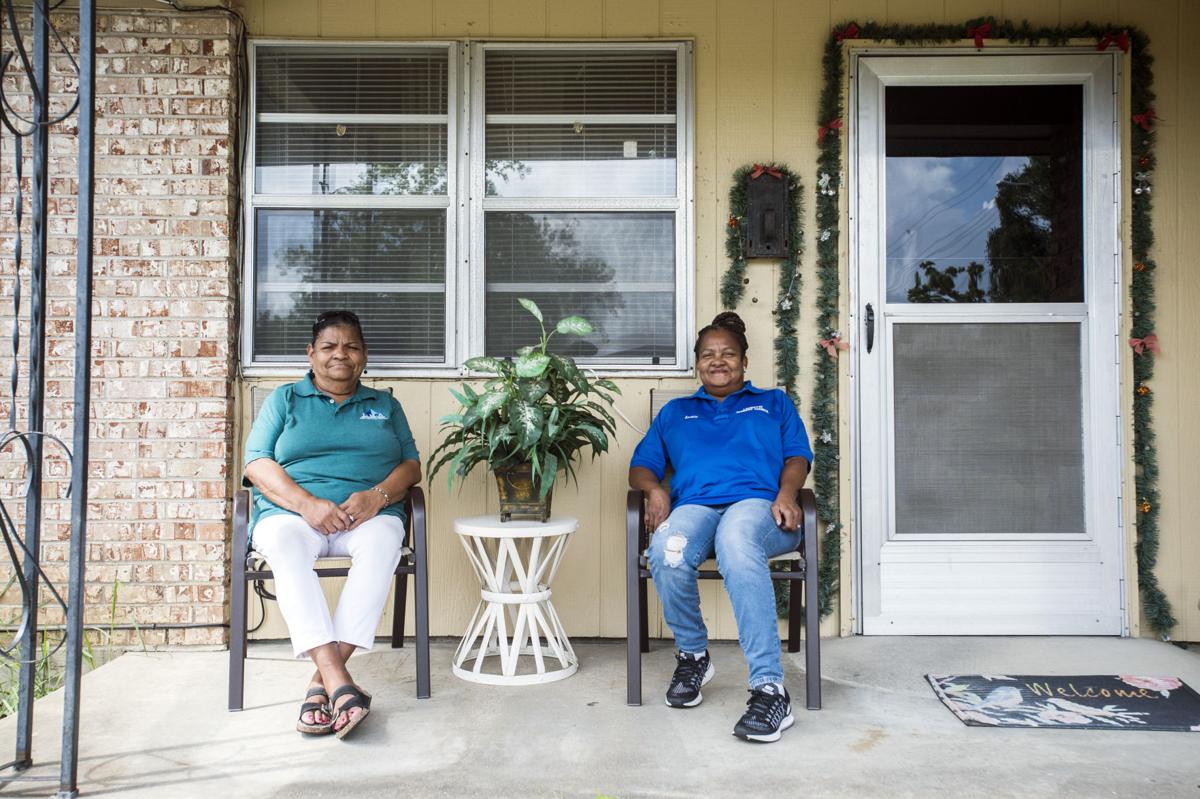 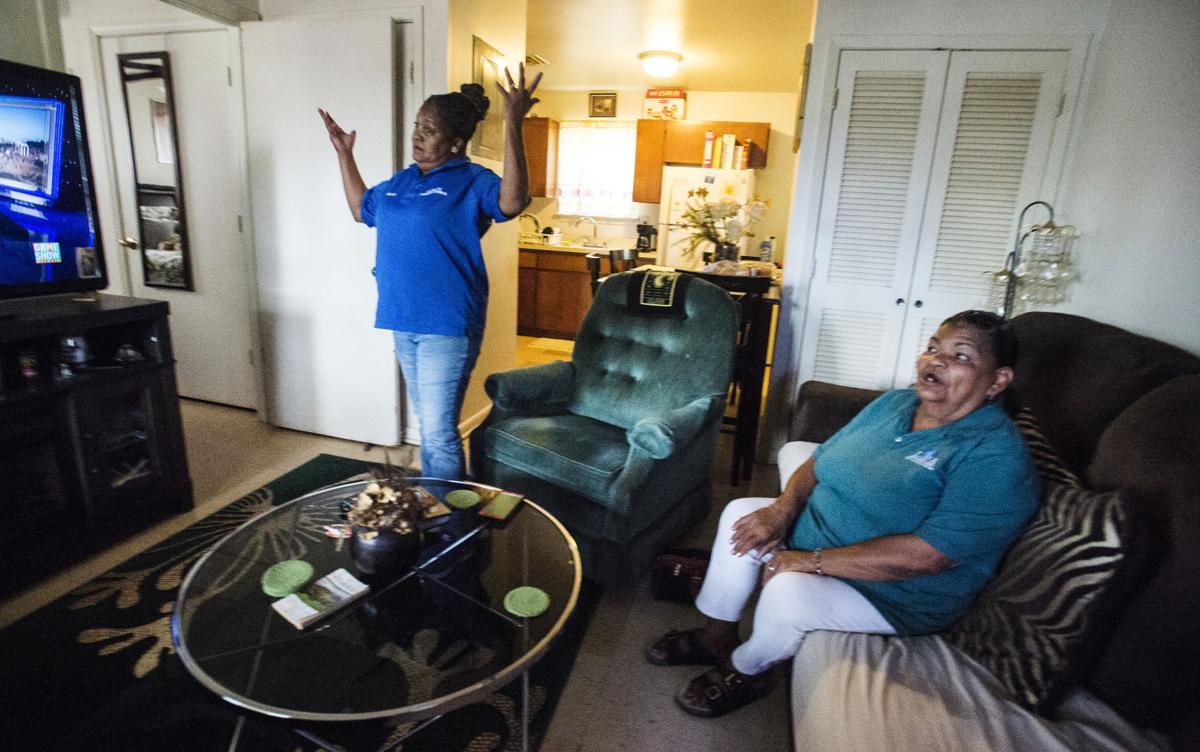 Leshia Carter, president of the Lafayette Housing Authority Resident Council, throws up her hands while talking about maintenance issues with her housing unit Thursday, August 8, 2019, at the C.O. Circle Housing Development in Lafayette, La. Also pictured is Thelma Broussard, a resident of the development and sergeant at arms for the Council. 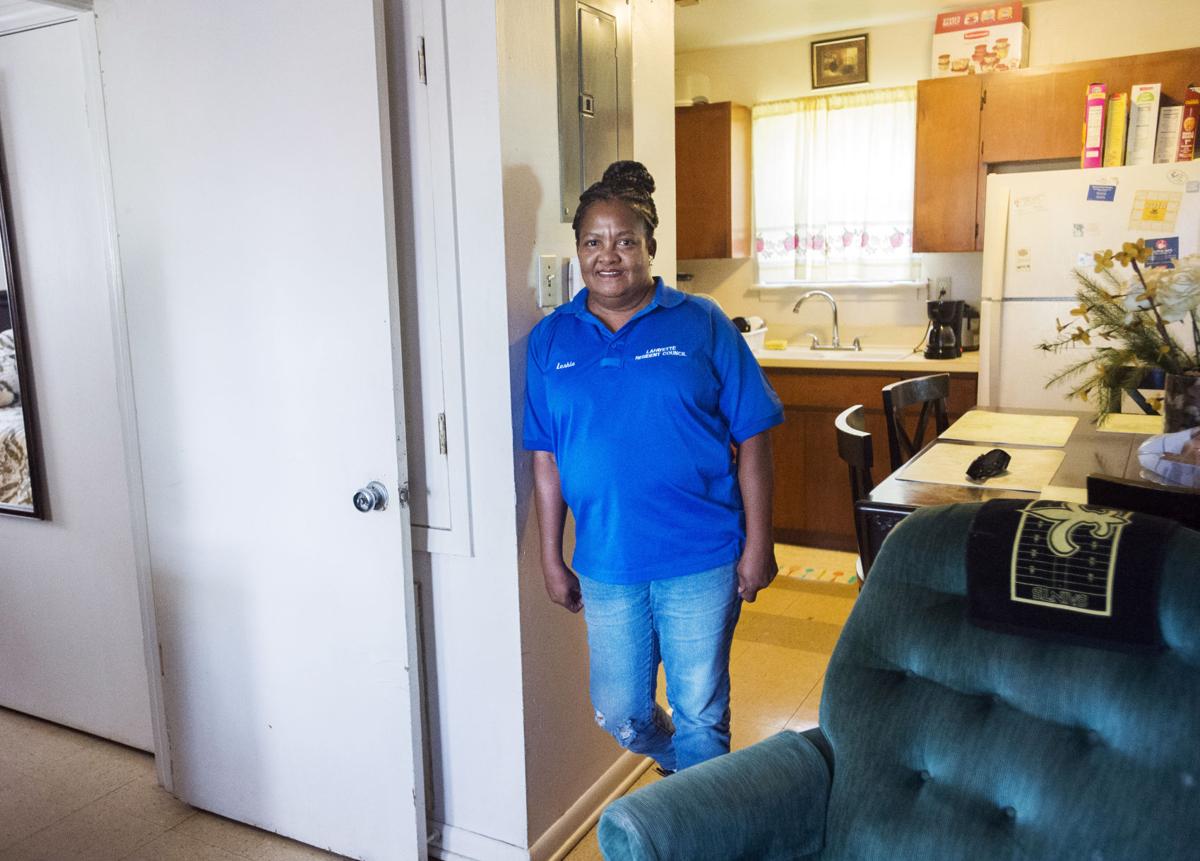 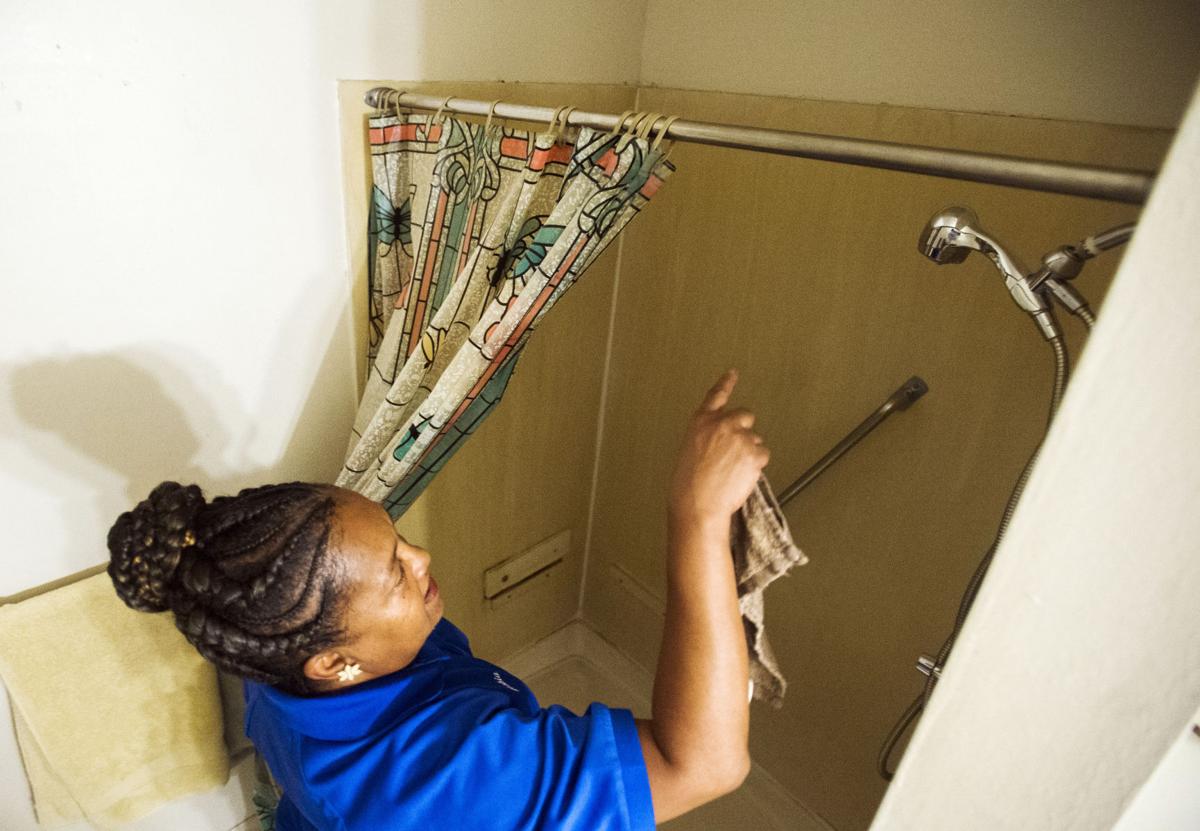 Leshia Carter, president of the Lafayette Housing Authority Resident Council, talks about maintenance issues with the shower in her housing unit Thursday, August 8, 2019, at the C.O. Circle Housing Development in Lafayette, La. 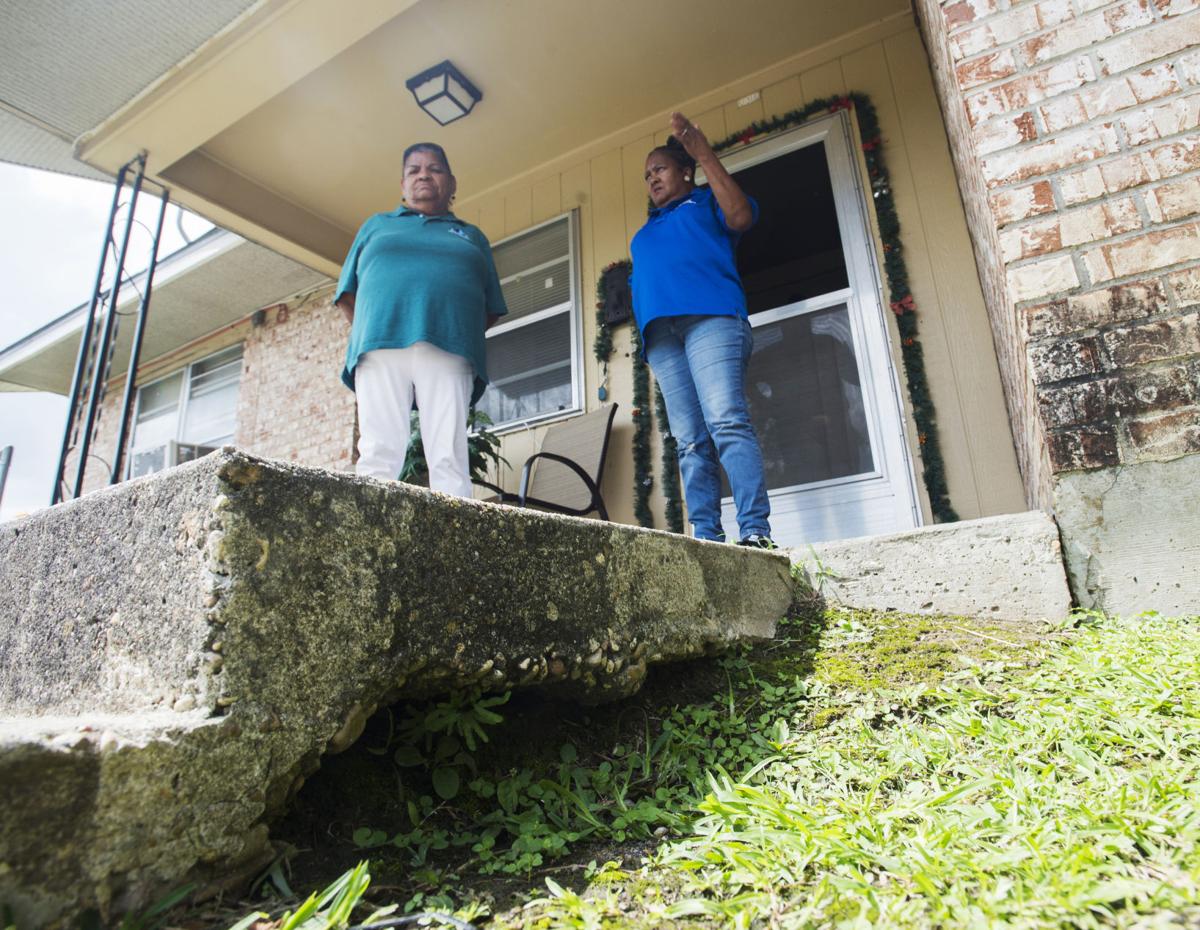 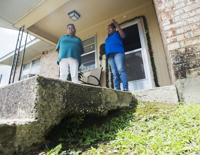 A hole in under the concrete steps is pictured at the home of Leshia Carter, right, as she stands with her friend and neighbor Thelma Broussard Thursday, August 8, 2019, at the C.O. Circle Housing Development in Lafayette, La. Carter is concerned that hole, which she says has gon unrepaired despite her requests, allows rodents and other pests to get into the unit. 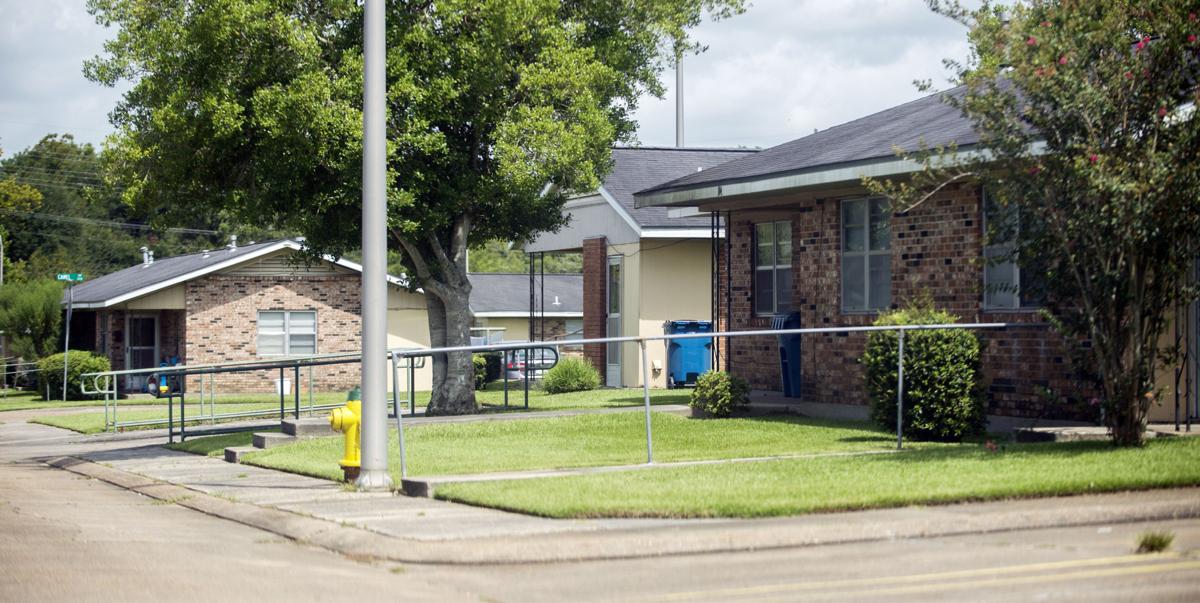 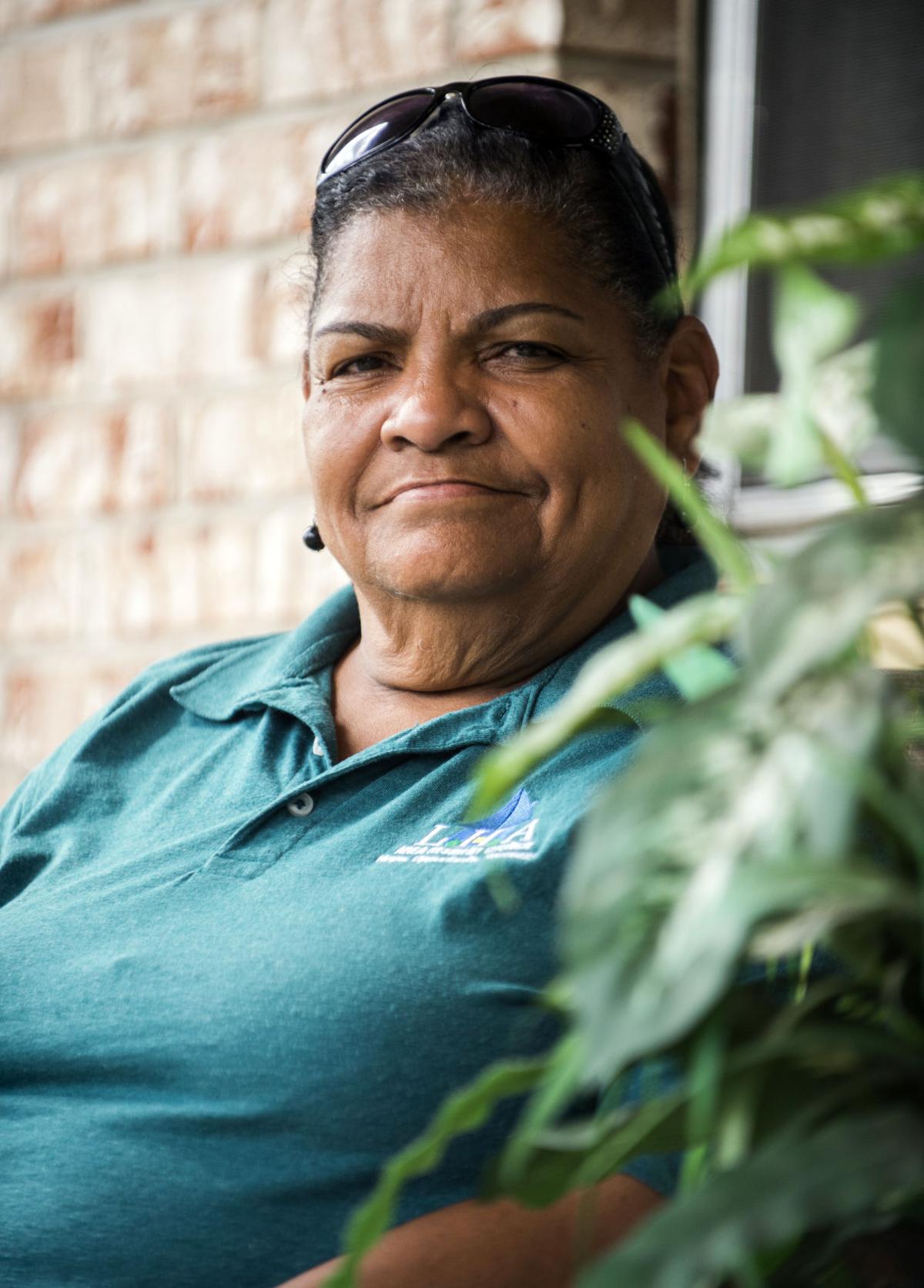 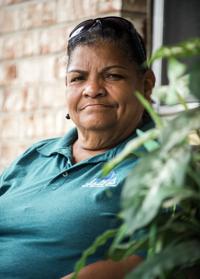 Thelma Broussard, seargent at arms for the Lafayette Housing Authority Resident Council, is pictured Thursday, August 8, 2019, at a friend's unit in the C.O. Circle Housing Development in Lafayette, La. 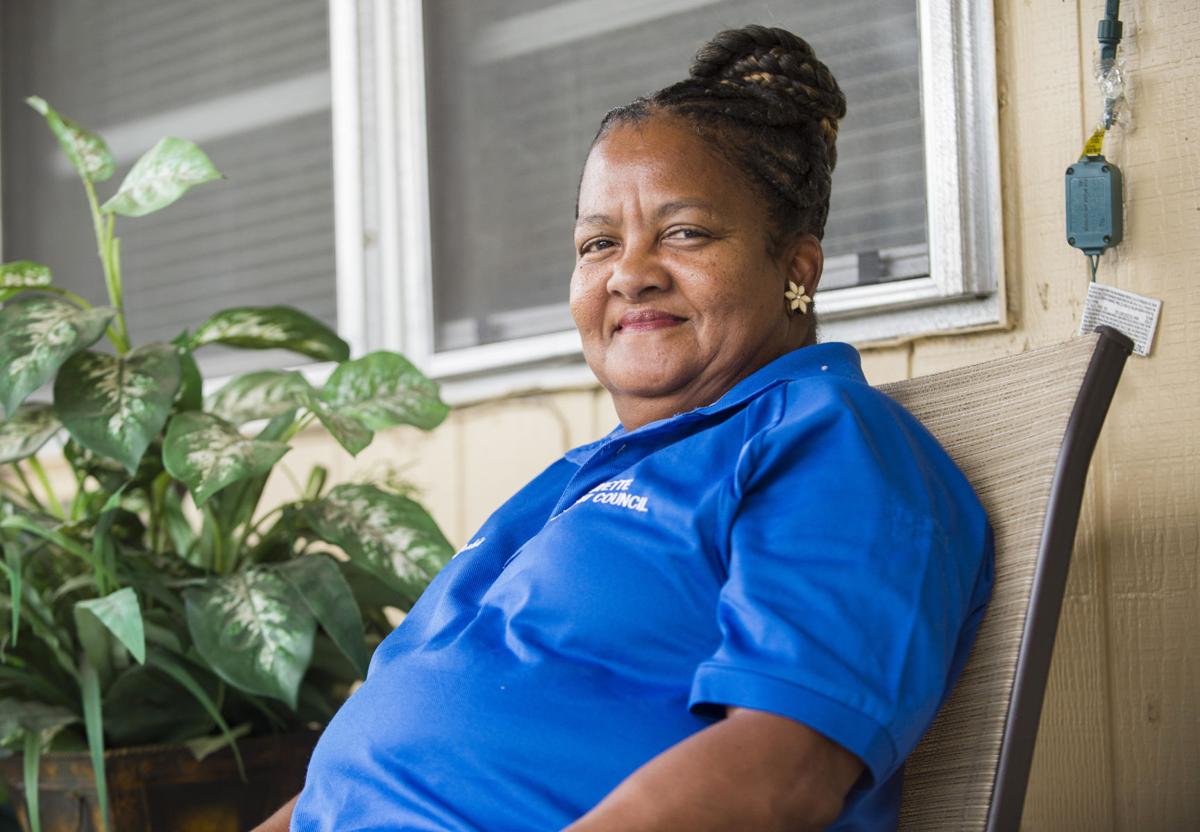 Leshia Carter, president of the Lafayette Housing Authority Resident Council, throws up her hands while talking about maintenance issues with her housing unit Thursday, August 8, 2019, at the C.O. Circle Housing Development in Lafayette, La. Also pictured is Thelma Broussard, a resident of the development and sergeant at arms for the Council.

Leshia Carter, president of the Lafayette Housing Authority Resident Council, talks about maintenance issues with the shower in her housing unit Thursday, August 8, 2019, at the C.O. Circle Housing Development in Lafayette, La.

A hole in under the concrete steps is pictured at the home of Leshia Carter, right, as she stands with her friend and neighbor Thelma Broussard Thursday, August 8, 2019, at the C.O. Circle Housing Development in Lafayette, La. Carter is concerned that hole, which she says has gon unrepaired despite her requests, allows rodents and other pests to get into the unit.

Thelma Broussard, seargent at arms for the Lafayette Housing Authority Resident Council, is pictured Thursday, August 8, 2019, at a friend's unit in the C.O. Circle Housing Development in Lafayette, La.

A for-profit company is poised to take control of hundreds of government-owned apartments designated for use by poorer Lafayette residents. The move comes as private operators across the country absorb public housing units in an effort to save them from severe disrepair.

Fyffe, Ala.-based Vantage Development will spend millions of dollars on renovations and manage all six of the Lafayette Housing Authority’s distressed, decades-old apartment complexes, according to plans. A combined $35 million in upgrades to the C.O. Circle, Moss and Simcoe developments is to come first, with improvements at the Irene Street, Macon Road and Martin Luther King set for later.

Vantage and the housing authority signed memorandums of understanding last year and are currently working to secure low-income housing tax credits and other means of financing. A construction timeline could "firm up" by the end of September, according to Yvonda Bean, the housing authority’s executive director.

The Lafayette deal and others like it are part of the federal Rental Assistance Demonstration program, which does away with public housing in the technical sense. The term "public housing" refers to apartments that local housing authorities own and operate with federal appropriations. Over the years, federal money has been insufficient to cover a capital needs backlog that totals about $40 billion and is climbing, according to the U.S. Department of Housing and Urban Development.

The Rental Assistance Demonstration program replaces direct federal funding with Section 8 subsidies for private landlords, who preserve affordability at what are now public housing developments. The goal is typically to entice developers — for-profit or nonprofit — to renovate the properties in exchange for management rights and shared ownership. In some cases, such as the deal in Lafayette, the developer will aim to lure investors with low-income housing tax credits.

Vantage’s website says it is “committed to providing top-tier affordable housing developments from concept to completed product with a focus on meeting the unique needs of a community.” The Vantage representative listed on tax credit applications for the Lafayette projects, Jay Ronca, did not return calls.

Initial plans show that the housing authority's inventory will shrink, underscoring concerns that the privatization wave will result in a repeat of failures associated with a previous program, called HOPE VI. That program replaced public housing developments with mixed-income communities in the 1990s and 2000s. It also forced tens of thousands of residents from their homes and reduced the supply of affordable housing across the country.

Federal lawmakers and regulators have taken steps to avoid those unintended consequences in the latest program, with prohibitions on forced relocations, sudden rent increases and re-screening tenants for eligibility. But advocates and government watchdogs say HUD isn’t doing enough to enforce its own rules.

Tenants, for example, are “routinely” re-screened for income, criminal history and credit, contrary to program rules, according to the National Housing Law Project, which highlighted that and other problems in a 2017 letter to HUD Secretary Ben Carson.

“On paper the program is really good. From the tenant’s perspective, it was written in a way that tenants retain the rights they had in public housing,” said Deborah Thorpe, an attorney with the National Housing Law Project. “But what we’ve seen is an implementation disaster.”

The government, meanwhile, has increasingly encouraged housing authorities to seek private redevelopment financing through the Rental Assistance Demonstration program since Congress authorized it in 2012. Since then, the cap on the number of units eligible for participation has increased from 60,000 to 455,000, or about 40 percent of all public housing apartments across the country.

Housing authorities in five Louisiana cities — Alexandria, Bogalusa, Leesville, Shreveport and Lake Charles — have already converted more than 1,000 apartments to Section 8 subsidies, and thousands more are awaiting approval, according to HUD. Federal approval for the conversions at C.O. Circle, Moss and Simcoe are expected by the end of the year.

The Government Accountability Office last year said HUD was failing to track impacts of the program on residents, and to monitor whether private property managers are fully complying with provisions meant to protect them. The agency has since adopted several compliance measures, including a certification system to ensure residents aren’t permanently forced from their homes, according to a HUD spokeswoman.

Bean, the Lafayette Housing Authority’s executive director, has discussed plans with the resident council, according to meeting notes kept by its president, Leshia Carter. Bean has assured residents they will be able to return after renovations, but Carter wonders when the work will finally begin.

“It’s been going on for years," but without results, Carter said.

Renovations couldn’t come soon enough, she said. Carter and her friend Thelma Broussard, who is also a C.O. Circle resident, said they scrub their showers with Clorox nearly every day to prevent mold from taking over.

“You can take a shower one day, and when you come back it’s black,” Broussard said in an interview at Carter’s apartment.

Carter said she has recently heard animal sounds coming from the walls. Whatever it is making the noises, Carter said, she suspects it entered through holes in the cement under the stairs to her doorway. She said housing authority staff told her they had contacted an exterminator but no one has yet come to take care of the problem.

Carter joked that she was thinking about buying a gun to get rid of the unwelcome guest.

“They are going to take me to the crazy house for shooting the wall,” Carter said.

At least one major obstacle stands in the way of the housing authority’s plans. About 60 of the 200 units at C.O. Circle are in a floodway, as designated by the Federal Emergency Management Agency, meaning they are probably ineligible for redevelopment.

The authority is asking FEMA for a reclassification, “but we have unfortunately been running into a brick wall,” Bean told the housing authority board at its July meeting,

“The only likely solution will be to tear them down,” she said.

Initial redevelopment plans for C.O. Circle already call for a reduction of 26 units, which falls within the Rental Assistance Demonstration program allowance of a 5 percent reduction in the housing authority’s overall inventory of 572 units.

But the C.O. Circle plans could still flout HUD rules: the 5 percent reduction from the overall inventory is permitted to come from a single development only if all the housing authority’s other developments are renovated at the same time. Since work at the Macon Road, Irene Street and Martin Luther King developments is planned in a future second phase, it’s not clear that the plans for C.O. Circle comply with the requirements.

Bean, who agreed to answer questions only in writing, said the redevelopment plans provided to The Advocate are only drafts, and that the housing authority will comply with all HUD requirements.

Those requirements, which are contained in a 240-page document, are easy to disregard if they aren’t codified in the housing authority’s memorandums of understanding with developers, said Thorpe, the National Housing Law Project attorney.

“The residents and even the advocates oftentimes aren’t going to sit through the HUD guidance. What they are going to do is look at this MOU,” Thorpe said. “It has to be clear and transparent about what the housing authority and what the new developer is going to come in and do.”

The housing authority’s agreements with Vantage — one for C.O. Circle, another for Moss and Simcoe — fall short of that standard, Thorpe said. She pointed to a provision where the housing authority says it will “make every effort” to secure Section 8 affordability requirements for “up to 100%” of the units for a 20-year term. There is no mention of what happens after that term.

“Making every effort is very different than requiring someone to actually do something,” Thorpe said.

The agreements are silent on the rights of existing residents, but Bean said that “every tenant will have the opportunity to return to their units per HUD requirements,” adding that the housing authority will enlist the help of a relocation specialist. It’s not clear how the housing authority will make good on that promise if the number of residents wanting to return outnumber available units after renovations.

The housing authority’s agreements provide Vantage the right of first refusal for future development and property management services at the Irene Street, Macon Road and Martin Luther King developments, no matter how the company performs on the first three projects.

If the housing authority wants to force Vantage out at any point during the 75-year ground leases, it must receive the investor’s approval.

Housing authorities that trade long-term control for short-term investment will face an existential choice when it comes time for the next round of upgrades, said Stewart Duggan, a lawyer who has negotiated similar deals on behalf of housing authorities in Georgia.

They can either “exist solely as an entity that just collects fees and issues bonds for other developments,” or they can continue in “the property management business and serving the community they know best,” Duggan said.

“Vantage isn’t from your community,” Duggan said. “Your housing authority is, and they have an interest in ensuring their residents are satisfied and treated well.”

With two new councils to govern Lafayette, what happens if they disagree on budget?

The next Lafayette mayor-president will face a challenge unlike that of any predecessor: He or she will have to convince two distinct legislat…