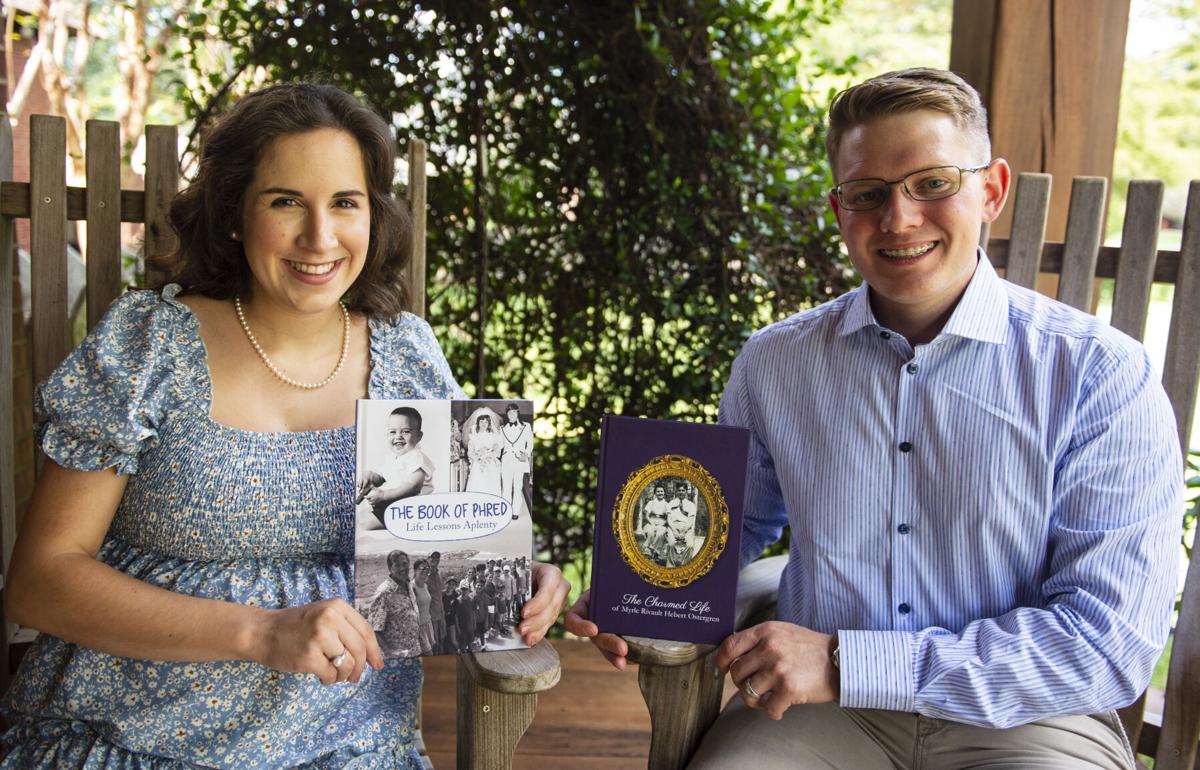 Olivia and Josh Savoie are pictured on Tuesday, October 5, 2021, at Olivia's family home in Youngsville. 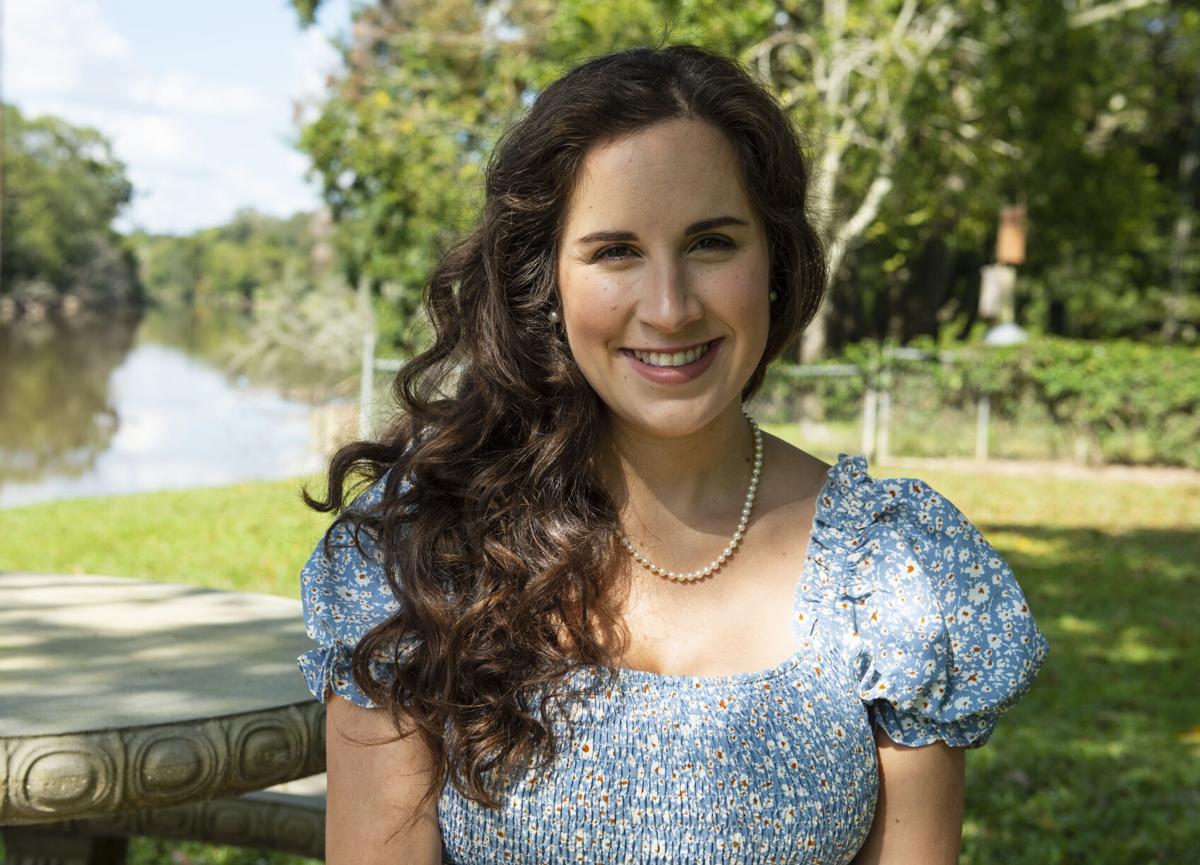 Olivia Savoie is pictured on Tuesday, October 5, 2021, at her family home in Youngsville.

Olivia and Josh Savoie are pictured on Tuesday, October 5, 2021, at Olivia's family home in Youngsville.

Olivia Savoie is pictured on Tuesday, October 5, 2021, at her family home in Youngsville.

Youngsville native Olivia Savoie’s love of history, storytelling and the rich lives of the elderly has blossomed into Raconteur Story Writing Services, a life story writing business where clients become like family and everyone’s story is worth telling.

In 2016, barely six months from graduating from the University of Louisiana at Lafayette, Savoie had the idea for a new career path.

Since childhood, Savoie said she’d been drawn to history, biographical works and the experiences of the elderly and older adults. She was closely bonded with her two grandmothers, spent high school afternoons visiting residents at nursing homes and even, for her ninth birthday, extended her single sleepover invitation to her father’s 60-year-old secretary. Something about their experiences and the ability to connect with people across generations resonated with her, she said.

What if she could combine those interests into a career writing the stories of people’s lives?

Savoie tested her concept on her grandmothers, interviewing them and producing books cataloguing their lives, while fine-tuning the process, the production and her marketing. By December, Savoie walked out of a final exam and went straight to her first professional appointment with M.P. Dumesnil, a Lafayette contractor and missionary.

“I’ve always loved reading biographies in particular and I think it’s relating to someone else even if they lived at a different time in history. Now, I love knowing that every word I write helps a lot of grandchildren relate to their grandparents who did live in another time in history….It’s neat to help them connect with each other and relate to each other through their life story,” Savoie said.

A kitten treehouse? Here's how a Lafayette family got creative to foster homeless pets

There are six tiny kittens in a Lafayette tree that aren't awaiting firefighter rescue. Instead, their shrill meows are asking for a different…

Her business has grown into a multi-person team, with Savoie, two additional writers, an editor, proofreader, two designers and her husband, Joshua, acting as project manager. They write three styles of books: life stories focused on a single, living subject, a couple’s life story focused on long married spouses, and tribute books focused on a deceased subject.

Developing the products sometimes meant going out on a limb and trusting their instincts, Savoie said.

“There’s no Googleable answer, there’s no direction, there’s no mentor, but we just try our best and keep developing what we’ve already developed and get better and better all the time,” she said.

Lafayette’s oldest cemetery will host a night tour on All Saints Day, a ready opportunity for people to learn about the ancient grounds and Ca…

For a typical life story book, the 26-year-old or another writer will meet with the subject for roughly five 3-hour sessions, where they’ll ask about 300 questions that help reveal the person’s memories and experiences. Then, they sort through family photos to include in the book and scan the images at the individual’s home. Next is the writing process, which takes one to two months, followed by editing and proofreading. Then the book is published, Savoie said.

While Raconteur is listed on the book, no individual writer is credited as the author. The goal is for the book to feel as if it were written by the subject; the writers pay special attention to the subject’s word choices, tone and speaking style during interviews, then replicate that when writing the book, she said.

“My work is so fulfilling and so meaningful to me. I see this stress relieved from the people I work with. My favorite person I’ve worked with was a WWII soldier who was 95, and he just passed away. He always, for 40 years, had tried to write his stories down because he knew they mattered to his family but he didn’t know how to execute it. For me to be able to go in there three years ago and help him, within two months, complete something he’d been trying to do for 40 years, it was so rewarding,” she said.

'World has moved on': In Ida's wake, volunteers in short supply in Terrebonne, Lafourche parishes

More than six weeks after Hurricane Ida made landfall, Catholic Charities of Acadiana is continuing to send assistance to their counterparts i…

“To know I’m helping to make their dreams come true, to know I’m helping them not have to worry about being forgotten, to help them to not worry about their most precious photos being lost or disappearing over the years, just to know that their story is going to be remembered — that is really fulfilling to me,” Savoie said.

The team has completed over 50 books, averaging 10 per year, for clients across southeast Louisiana and the Gulf Coast, and as far as Colorado, Illinois and Pennsylvania. Their subjects cover the gamut — housewives, oilfield executives, oilfield cooks and laborers, schoolteachers, business owners, lawyers.

Everyone has a story to tell, Savoie said.

“A big thing I’ve learned is that anyone and everyone has enough memories to make a book their family would treasure forever...The years keep proving that it doesn’t matter what someone did, their family cares deeply just the same about documenting their memories,” she said.

Lafayette students meet voice of Siri: 'She's on the screen — staring at you, studying you'

If you've never given much thought to the person behind the voice of Siri, you're not alone.

Not all families know how to unearth those memories themselves, or take the time to do so.

Savoie said while Louisiana has a heavily family-centered culture, she’s heard many people share their regret over not asking enough questions while their loved one was alive. It can be easy to put older family members in a box and forget they’ve had a lifetime of rich experiences everyone can relate to, she said.

The hope is that their books become family heirlooms handed down for generations.

Once the projects are complete, most client relationships don’t end there, Savoie said. The 26-year-old expectant mother takes day trips with clients, goes on lunch dates with them and their families, pops in on holidays, attends funerals for former subjects and even had clients attend her recent baby shower.

Here’s a way to help local musicians and create a magic moment in your own backyard.

“When you work so closely with someone, that you’re stepping into their shoes and writing their story from their own point of view, there’s no way for you not to love each other in the end and for the writer not to deeply care about the subject of the book. For me, I feel like I have so many adopted grandparents and I’m very blessed by that,” she said.

Ronnie Hebert and his mother, Myrle Rivault Hebert Ostergren, are an example of those lasting relationships.

Hebert commissioned a book about his mother, now 106, and said he now considers Savoie and her husband dear friends. One Christmas, while she was making a delivery near their home in Plaquemine, Hebert recalled how Savoie, a harpist, made a surprise visit with her instrument to play for his mother.

“I’ve got to believe that my life has been much better by me knowing them and by doing this,” Hebert said.

Even being a close knit family, with Myrle at the center as “their queen”, Hebert said he learned new things about his mother through the experience, and what it was like in Addis and Brusly when she was young. Myrle was valedictorian of her high school class and attended LSU before forgoing courses to work during the Great Depression to help her family, he said.

“It made me get to know my mama more...I’m just so tickled to death,” he said.

Truman Early Childhood to get new facility thanks to $26.5 million in COVID relief funds

She’s always been a character, with a sharp mind and personality that draws in friends. A longtime card player, she was once a state bridge champion. All those details and more are captured in her book, Hebert said.

Every family member received a copy and additional copies have been set aside for future generations. Seeing her descendants interested in her story has been a thrill, he said.

“I wanted to make sure that everybody that mama brought into this world or who is in this world because of her knows who she is and how good of a woman she was,” he said.

If you’ve been in Lafayette Parish around Halloween, you’ve probably heard of Fright Trail, the haunted attraction in Scott where guests flee …