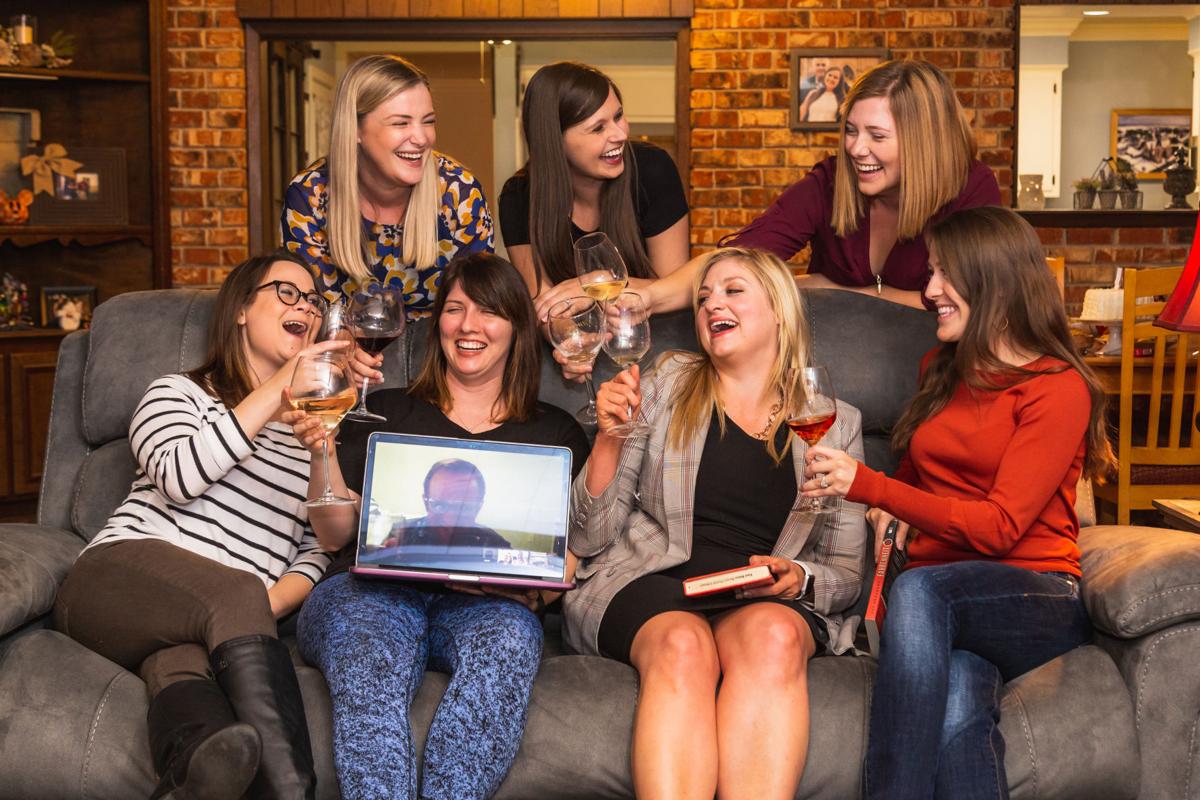 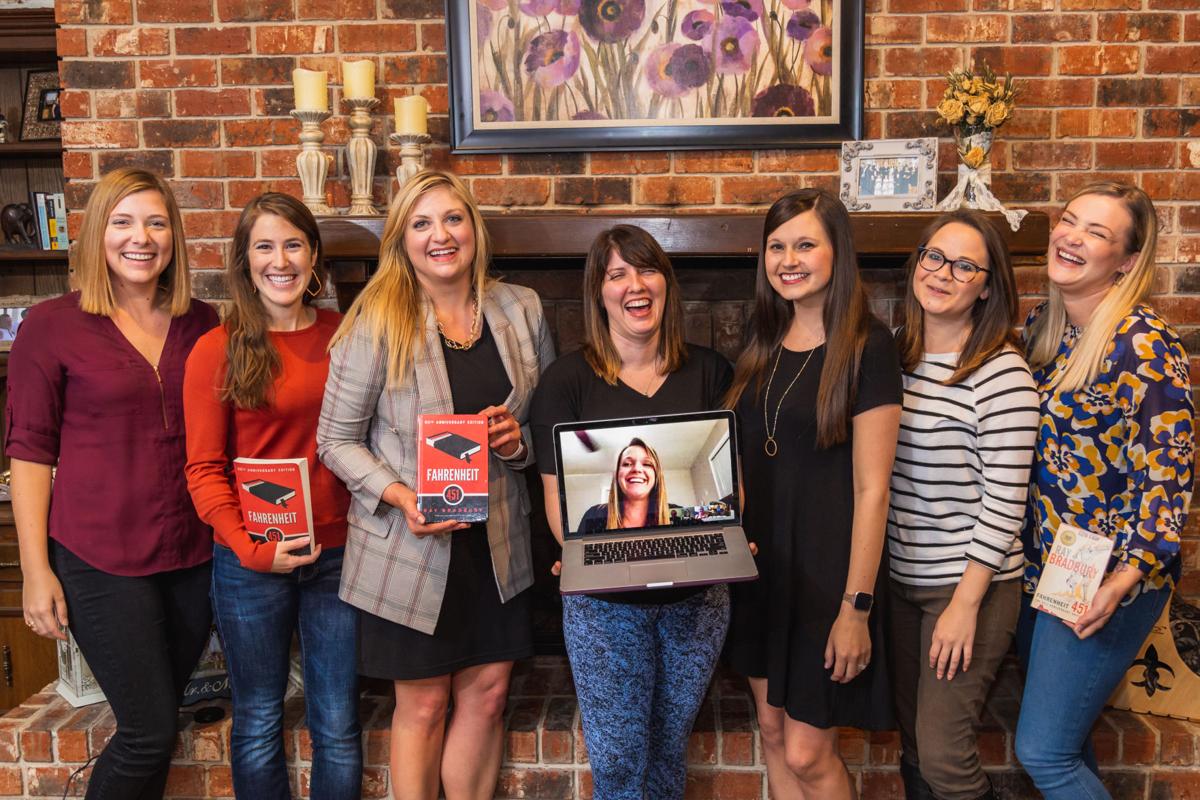 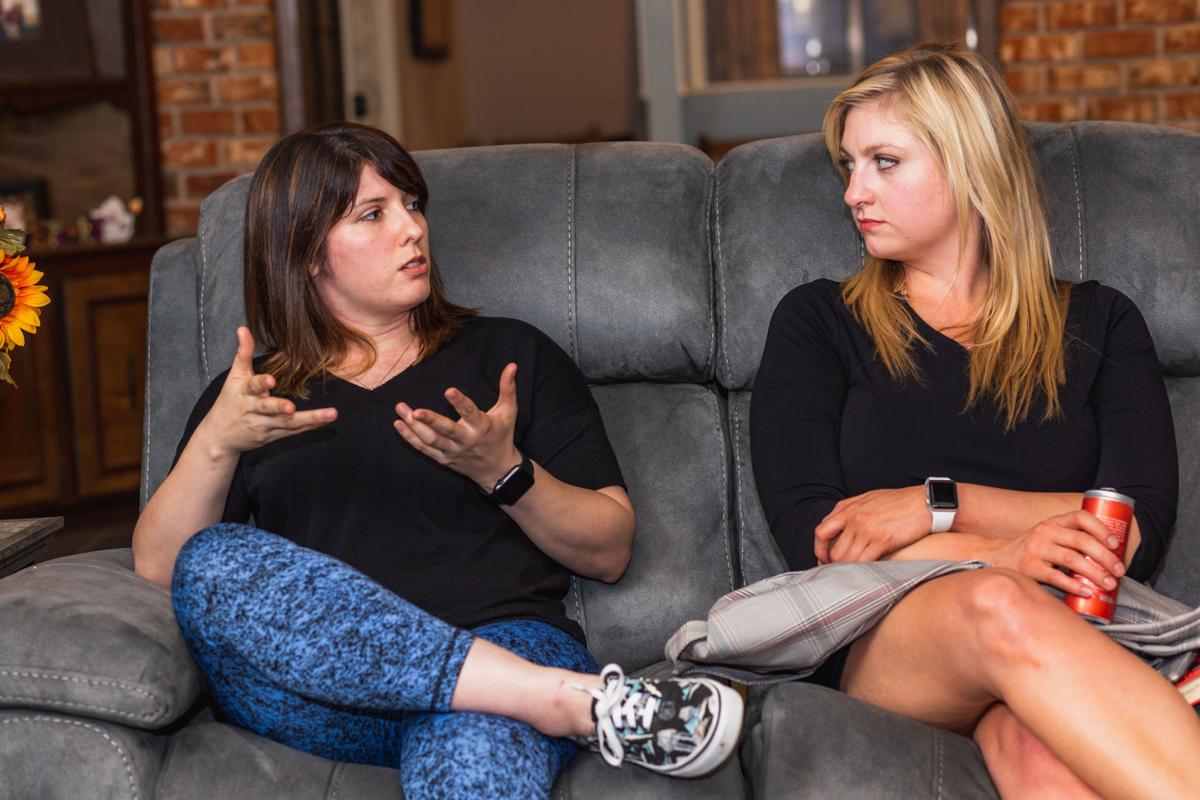 Chelsea Moreau, left, and Lindsay Rabalais catch up at the September meeting of the Basic Book Club, which gathers once a month. 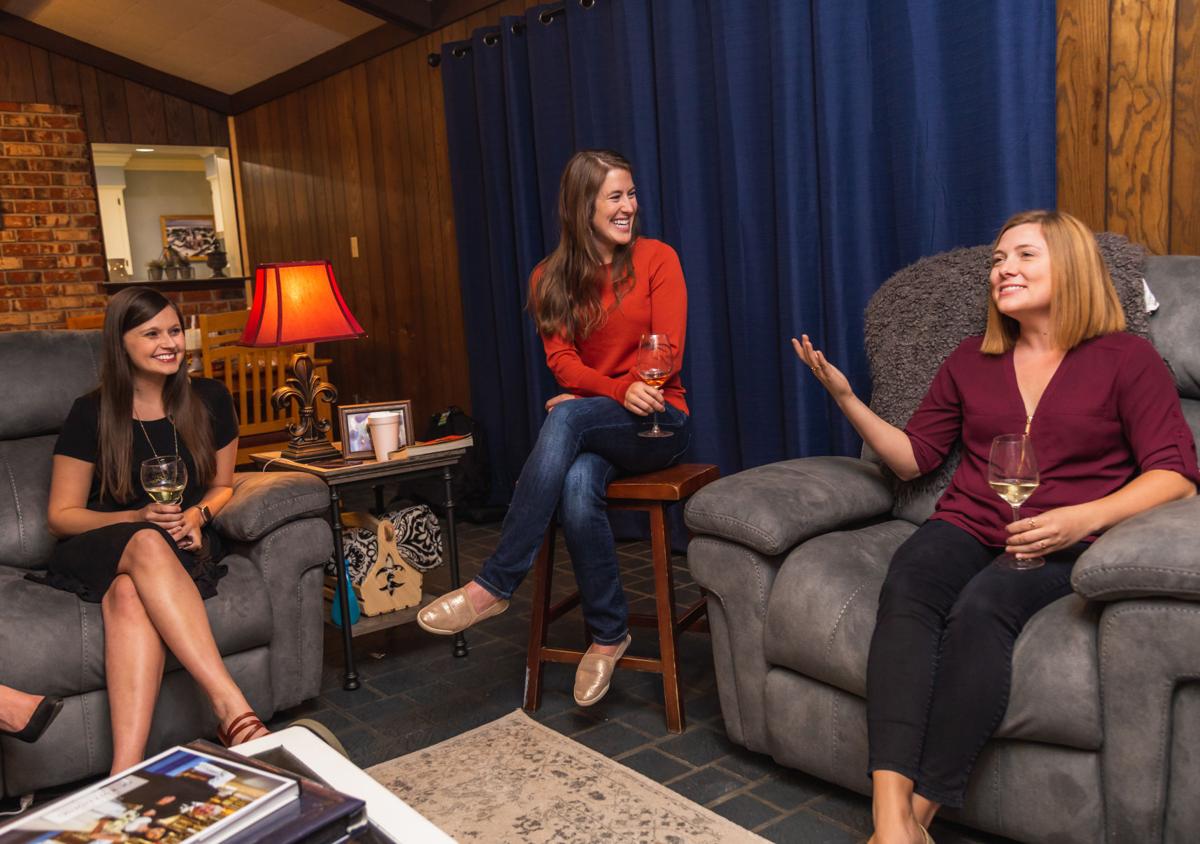 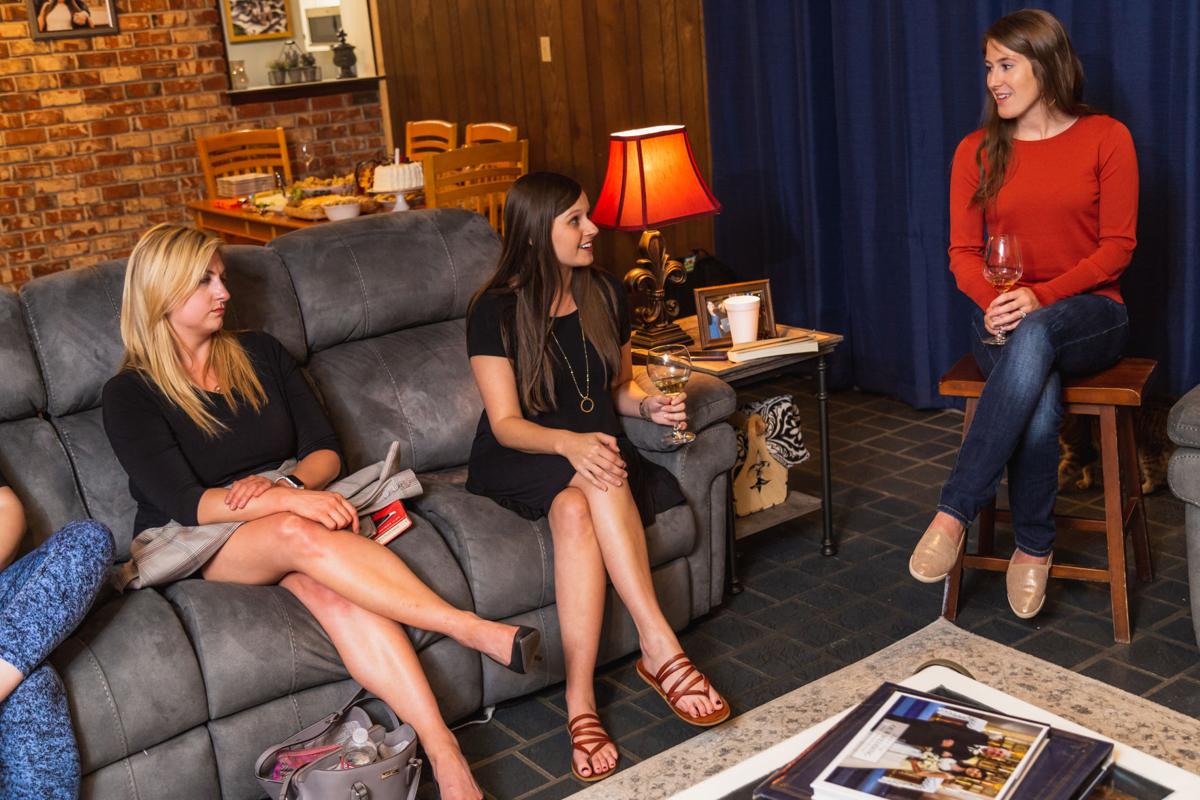 Lindsay Rabalais, Emily Ward and Dani Borel, from left, exchange thoughts on 'Farenheit 451' at the September meeting of the Basic Book Club, a group of millennials, many of whom met while attending LSU. 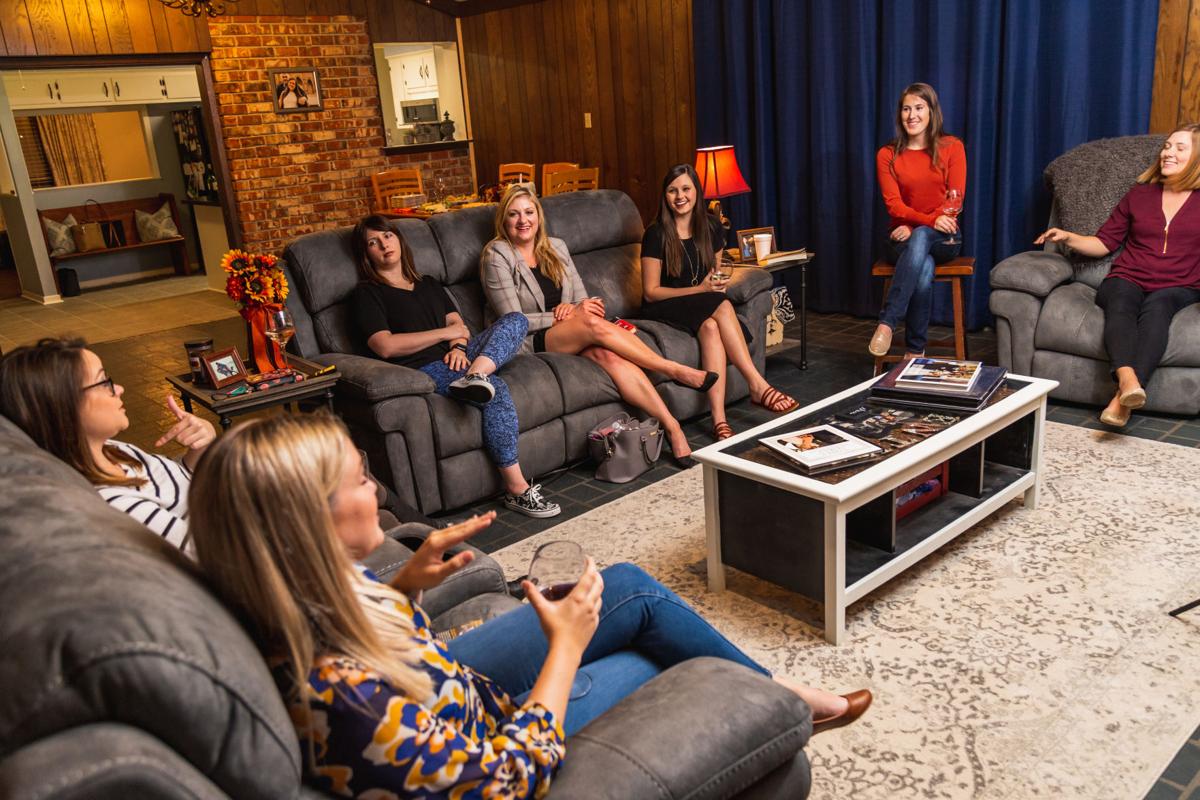 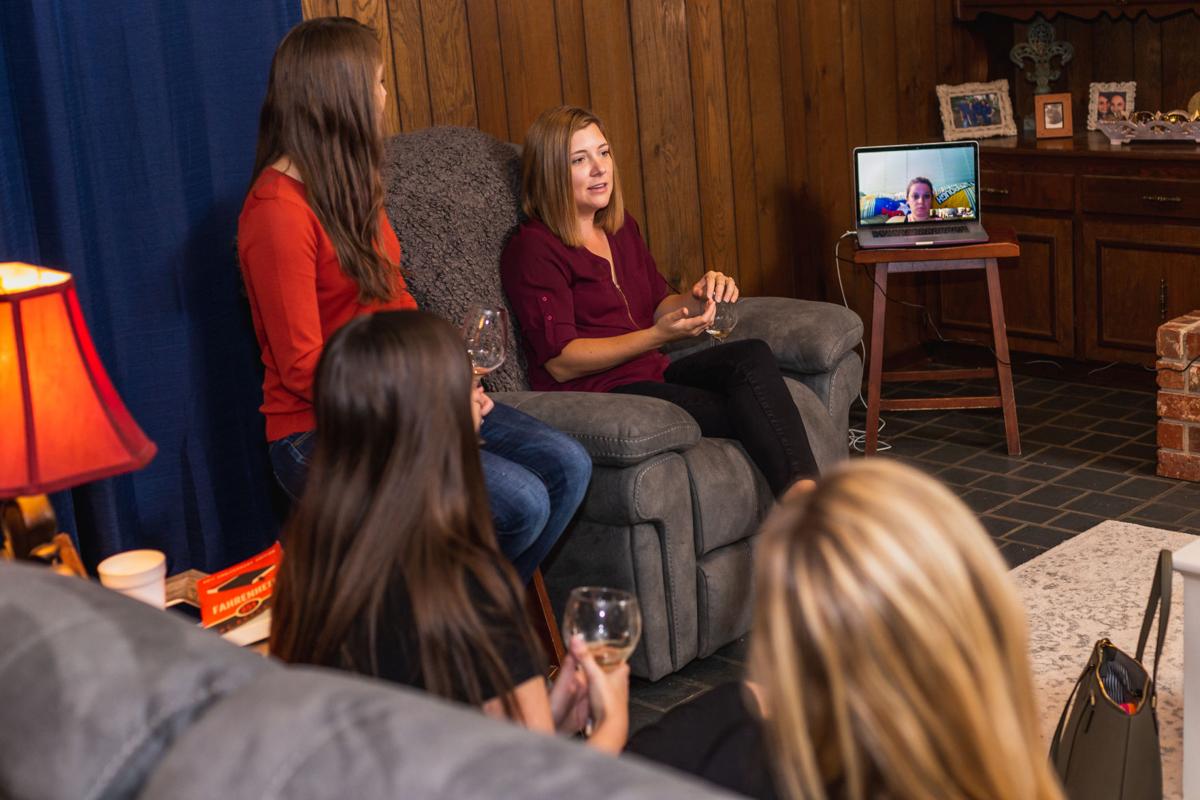 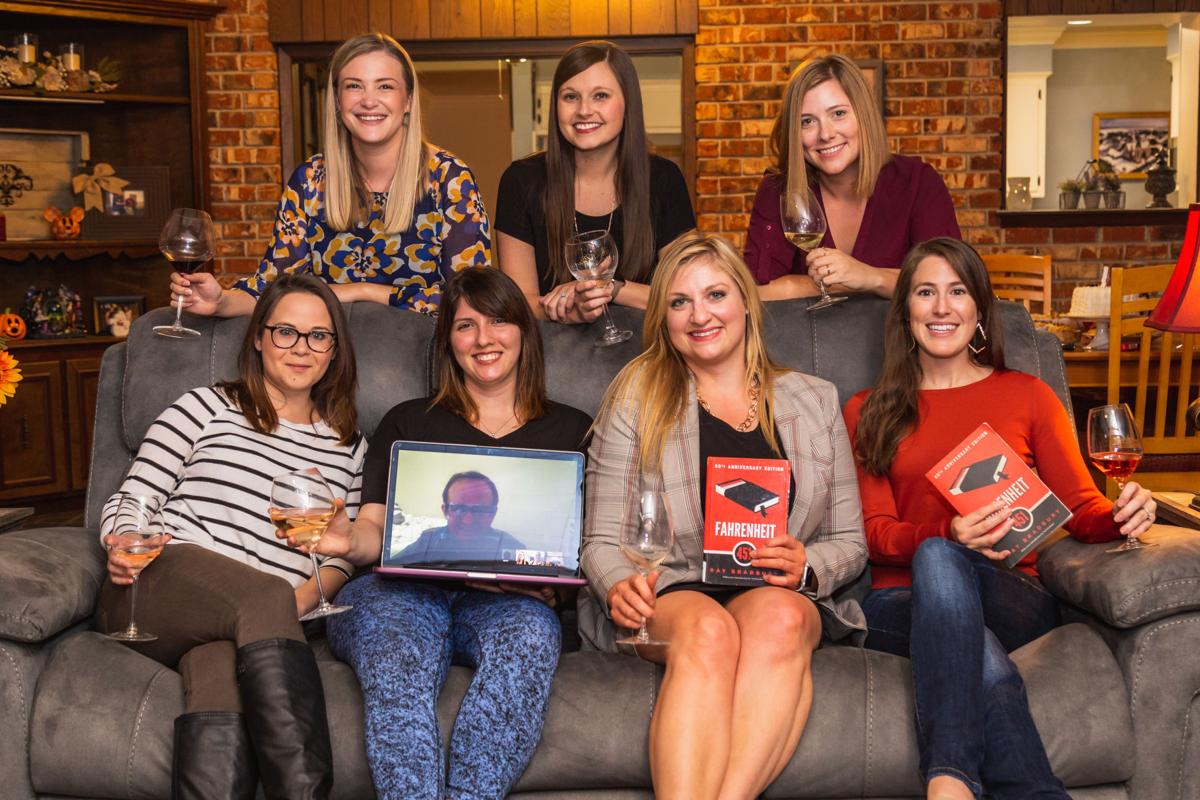 Chelsea Moreau, left, and Lindsay Rabalais catch up at the September meeting of the Basic Book Club, which gathers once a month.

Lindsay Rabalais, Emily Ward and Dani Borel, from left, exchange thoughts on 'Farenheit 451' at the September meeting of the Basic Book Club, a group of millennials, many of whom met while attending LSU.

Anne Hutchinson may have held the first one.

But what would Hutchinson, who gathered her female discussion group in 1634 on a ship en route to the Massachusetts Bay Colony, think of the Basic Book Club?

Like Hutchinson, the Baton Rouge-based Basics are on the move.

Even though most of the 20- and early 30-somethings still gather in a local member’s home, others are coming in over the internet from St. Louis, Missouri; Kansas City, Missouri; Nashville, Tennessee; and, closer to home, in Arabi.

As some members settled into comfy seats in Emily Ward’s living room for the September meeting, on the laptop perched in a corner, Megan Kurtz, Aaron Caffarel and Allison Cheaney, three of the out-of-state members, joined the discussion via Google Hangouts.

Last month's meeting was extra-special as it marked the club's fourth anniversary. Amazingly, they've never had to cancel a last-Tuesday-of-the-month sit-down.

"So a lot of us knew each other beforehand, and we all like books and we're all readers," said Katie Hennigan. "We were talking about different books and what we liked and disliked, and we decided that starting a book club would be a really good way to read some things that we weren't familiar with.

"All of us like different genres and different types of books, so it just happened, and we weren't really thinking that it would be four years, but it's worked."

Starting out with six or seven members, most of whom attended LSU together, the club at one time swelled to 13-14, but fluctuates between 10 and 12 members now. Caffarel is the only guy in the bunch, and that's not surprising, as 70-80 percent of the nation's book clubs are all-female.

Since Caffarel's nominee, the Ray Bradbury dystopian classic "Farenheit 451," was chosen as September's book, he led the evening's discussion.

The book, first published in 1953, is considered one of Bradbury's best works, and revolves around a future American society in which books are outlawed and firemen burn any they discover.

"I love the format. It's very democratic," said Ward, who has been a member for two years. "I've never been in a book club before, and I didn't attend LSU, but I knew three of the girls. They were super welcoming."

The club alternates genres each month, members make individual book pitches within that genre, and then they vote.

"The genre pitch is something we started about two years ago, and I think it's worked really well to force us out of our comfort zone, too," Lauren Leist said. "Like making us actually read a wide variety of different things."

"Fahrenheit 451" came from the genre "books about books." For most of the group, it was the second time reading it, since many students are required to read it in high school.

"And I think we strike a pretty good balance between socializing and discussing the book, because we all get here, we catch up on each other's lives and then we dive into the book," said Leist, sipping on a glass of wine. "I've had friends who were part of other book clubs and they're like, 'Oh, all we did was drink wine and we never got to the book,' and I've had friends who were on the flipside of it, and they're like, 'Oh, they take themselves too seriously.' We don't take ourselves too seriously, but we also make sure we have a lively conversation every month."

"It started with like just, I don't know, it just seemed like an adult thing to do," he said. "We were busy and didn't have time to read a lot, and really, it's continued to focus on the books, it's continued to be about breaking out and discovering new things and reading things we wouldn't normally read, but it's also just really good, now that we're kind of spread out in St. Louis, Kansas City and Nashville, it's always a monthly check-in. So even if I don't hear from Katie or Chelsea (Moreau) or anyone in the room, at least I have the club to catch up on what's going on. So it's been a really good way for us to stay connected."

Moreau joined in the "Farenheit 451" chat by phone as she drove from Central to the Baton Rouge meeting that night. But before that came a brief general discussion about the club and its book choices.

"'The Polygamist's Daughter' was the craziest discussion we've had," offered member Dani Borel. "It was a nonfiction book about a young woman whose father ran a polygamist cult. It talked about her life growing up and then kind of how infamous he is and what happened to him after his, I guess you'd say, falling out with the church."

At 320 pages, "The Polygamist's Daughter: A Memoir" by Anna LeBaron and Leslie Wilson, is an average-length read for the Basics.

"Page counts, we know our limits, not 1,000 pages in a month," Lindsay Rabalais said. "This is a nice, once-a-month kind of escape. We never want it to feel like a chore.

"Once the discussion starts, everyone contributes, and they have great thoughts. Even if they haven't read the book, everyone stays on topic."

And the first question is always "What is the point of the book?"

The generalization that censorship is bad while reading is good launched the hour-plus analysis of "Farenheit 451."

"All the media stuff they're consuming all the time is telling them that they're happy so you don't really know what happiness is anymore, which is really sad," Cheaney said, of the book's principle characters.

"If Ray Bradbury were writing this today, what other things besides books would we have to burn or stamp out to get rid of individualistic thought?" Caffarel queried.

The historical context of the 1950s, the Second Red Scare, and the evolution of television also figured in the night's exchanges.

What would renegade Hutchinson say of all this?

Well, she'd have to read the book first.