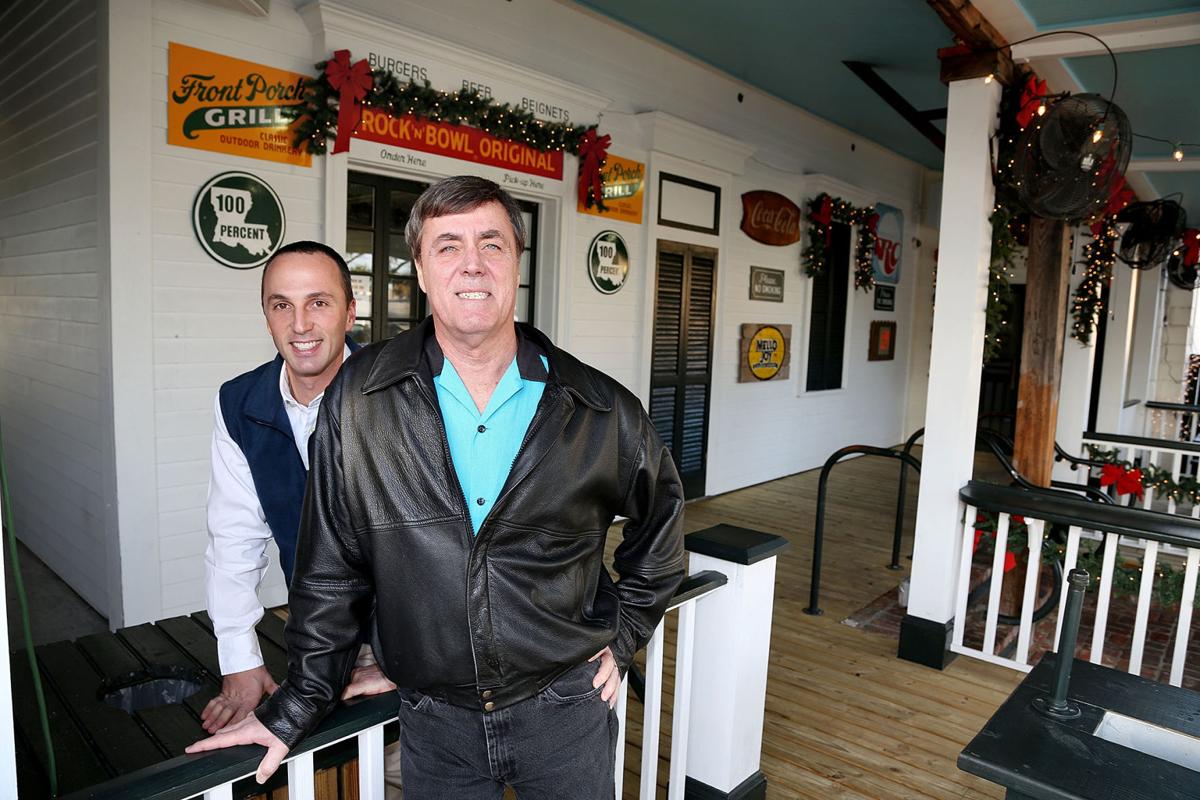 Advocate staff photo by ELIOT KAMENITZ -- John Blancher, right, photographed with his son Johnny Blancher, continues to expand his businesses, which include the popular Rock 'n' Bowl bowling alley/music venue in New Orleans and the nearby Ye Olde College Inn restaurant. In December 2016, Blancher acquired the Whitney Bank building in downtown Lafayette and plans to open another Rock 'n' Bowl there. The file photo of Johnny and John Blancher outside the New Orleans Rock n' Bowl was taken on January 3, 2013. 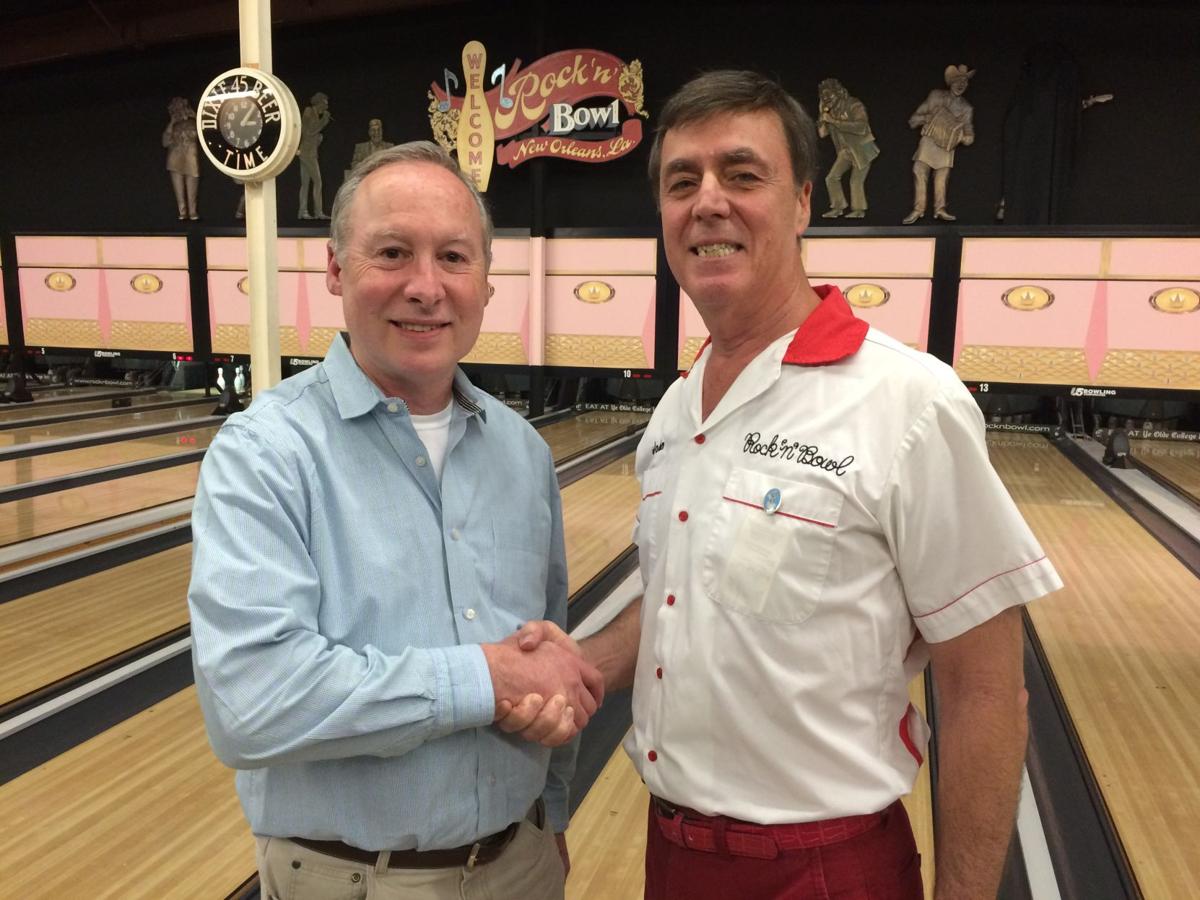 Advocate staff photo by ELIOT KAMENITZ -- John Blancher, right, photographed with his son Johnny Blancher, continues to expand his businesses, which include the popular Rock 'n' Bowl bowling alley/music venue in New Orleans and the nearby Ye Olde College Inn restaurant. In December 2016, Blancher acquired the Whitney Bank building in downtown Lafayette and plans to open another Rock 'n' Bowl there. The file photo of Johnny and John Blancher outside the New Orleans Rock n' Bowl was taken on January 3, 2013.

He hopes to open the new facility by late 2017.

“I’m pretty excited about the whole thing,” he said. “The last Rock ’n’ Bowl we built was a learning experience, and I’m sure this one will be, too.”

In the 27 years since he opened the original Rock ’n’ Bowl, proprietor John Blancher has tak…

He intends to continue leasing the top three floors of the building at 911 Lee Ave. as office space. Sixteen bowling lanes will be built atop what is now a parking lot fronting Lee Avenue, underneath a high-ceilinged extension of the first floor. Patrons will enter from Jefferson Street, where the bank’s drive-thru lanes are now.

The second floor will be converted to a catering hall, with party suites that look out over the bowling lanes. Party-goers “will be able to hear the music and see the bands” from the rented suites, Blancher said.

He estimates construction costs will be at least $1.5 million, including bowling machines and equipment.

Whitney Bank moved out in 2014. In early 2015, Baton Rouge-based Pecan Grove Commercial Properties bought the property for $1.9 million. Blancher closed the deal to buy it on Dec. 12.

Blancher is well-versed in the music of southwest Louisiana, as zydeco has always factored prominently in the New Orleans Rock ’n’ Bowl’s soundtrack. The late Boozoo Chavis and Beau Jocque squared off in popular “battles” at Rock ’n’ Bowl over the years. The venue’s weekly Zydeco Night on Thursdays is the only place where patrons can dance to zydeco on a regular basis in New Orleans.

He anticipates showcasing zydeco and Cajun music at the Lafayette facility, especially on festival weekends. He’s a big fan of Roddie Romero & the Hub City All-Stars and believes they would be a great band for the grand opening.

But the music won’t be exclusively Cajun and zydeco.

“My gut feeling is there’s so much of it there already that they’ll be looking for other types of music, too. R&B and cover bands — people in Lafayette like that too. I can’t imagine that if we bring the Boogie Men and those horns, they wouldn’t dig it. And I’m sure there are some rockers that would want to hear (’80s arena rock cover band) Contraflow.”

One way to get a gig at Rock 'n' Bowl? Be the cardiologist who treated John Blancher

His instincts have served him well. In 1988, in need of a career, Blancher bought a struggling, dilapidated bowling alley near Tulane and South Carrollton avenues in New Orleans. Within several years, Rock ’n’ Bowl had become one of the most popular music venues in New Orleans.

In 2009, following a dispute with his landlord, Blancher bought a former Helm Paint Co. warehouse several blocks away and built a new Rock ’n’ Bowl from the ground up. He also acquired a neighboring restaurant, Ye Olde College Inn. Business has been booming ever since.

Rock ’n’ Bowl booked 222 private events in December alone. On Monday, while Blancher was in Lafayette for the closing, his staff in New Orleans oversaw seven parties for groups ranging from 21 to 150 people.

“This business has taken 28 years to build,” Blancher said. “It will take a while before we have that in Lafayette, but that’s the goal.”

He’s wanted to open a satellite Rock ’n’ Bowl outside New Orleans ever since Hurricane Katrina.

“We always felt that Lafayette was the most logical” place, he said. “As far as the culture, it’s a Catholic city like New Orleans, and it is a party town. Really nice people. We were close several times, but things never worked out.”

Local officials in Lafayette have been supportive of his plans, he said: “The city seems to be very open to it.”

Blancher already has a history with the future site of the Lafayette Rock ’n’ Bowl. He lived temporarily in Lafayette after Katrina, and he made several trips to the downtown Whitney Bank to deal with insurance and loan issues related to his businesses in New Orleans.

“At that time, we were wondering if we would ever get back to New Orleans,” he said. “Eleven years later, we bought the Whitney building.”

Immediately after the closing, the devoutly Roman Catholic Blancher repeated a ritual from previous acquisitions: He hung iconic portraits of the Sacred Heart of Jesus, the Blessed Mother and Our Lady of Guadalupe — whose feast day coincided with the closing — near the elevator in the lobby of the Whitney building.

“It won’t be long,” he said, “before we’re painting things Blessed Mother blue.”

Johnny Blancher's vision of turning an old Lafayette bank building into a premier downtown entertainment venue is on its way to becoming a reality.