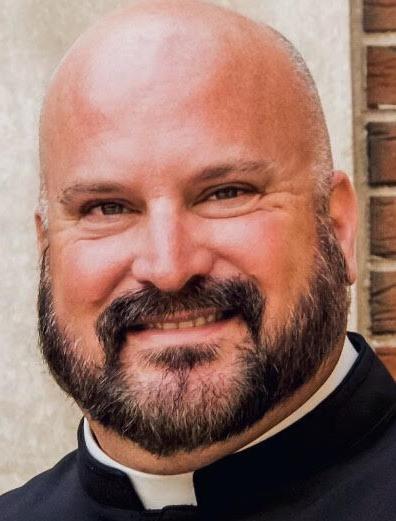 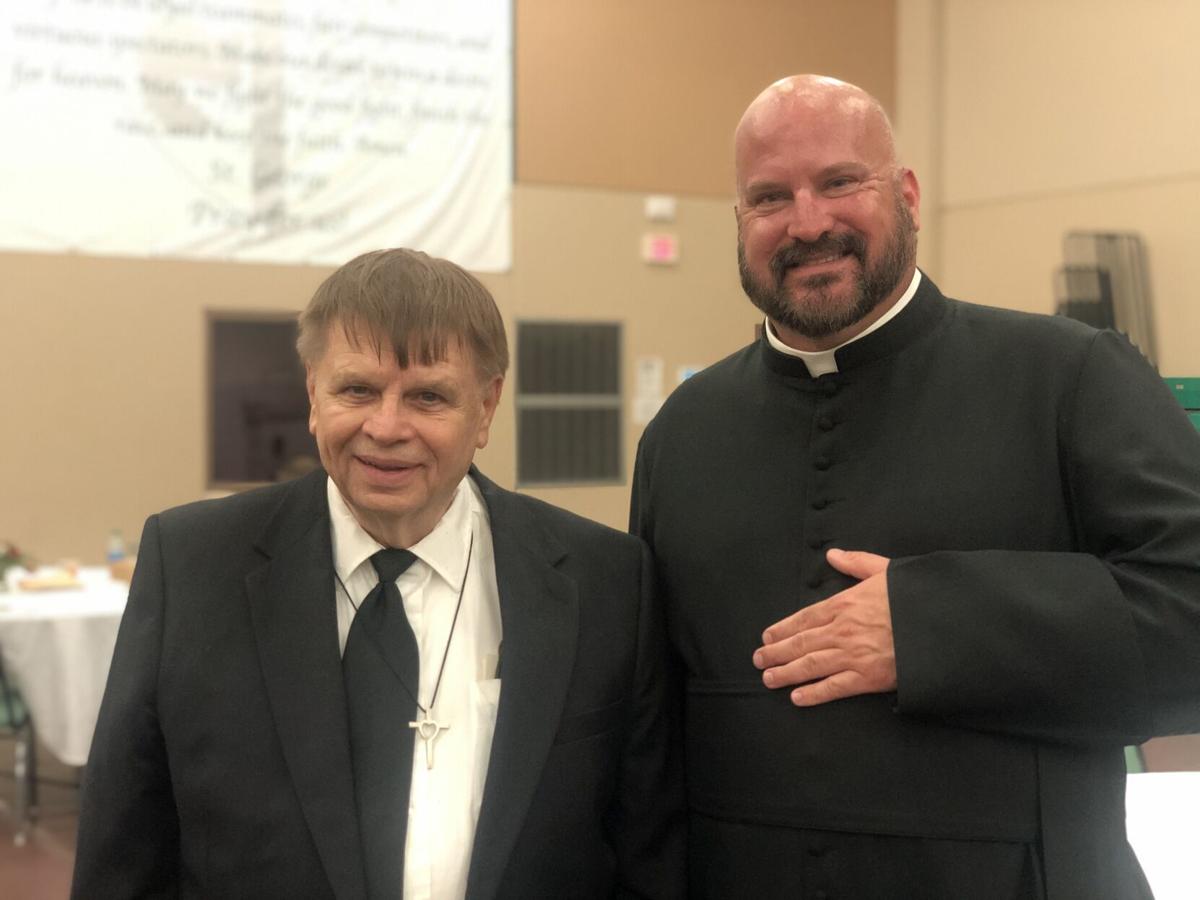 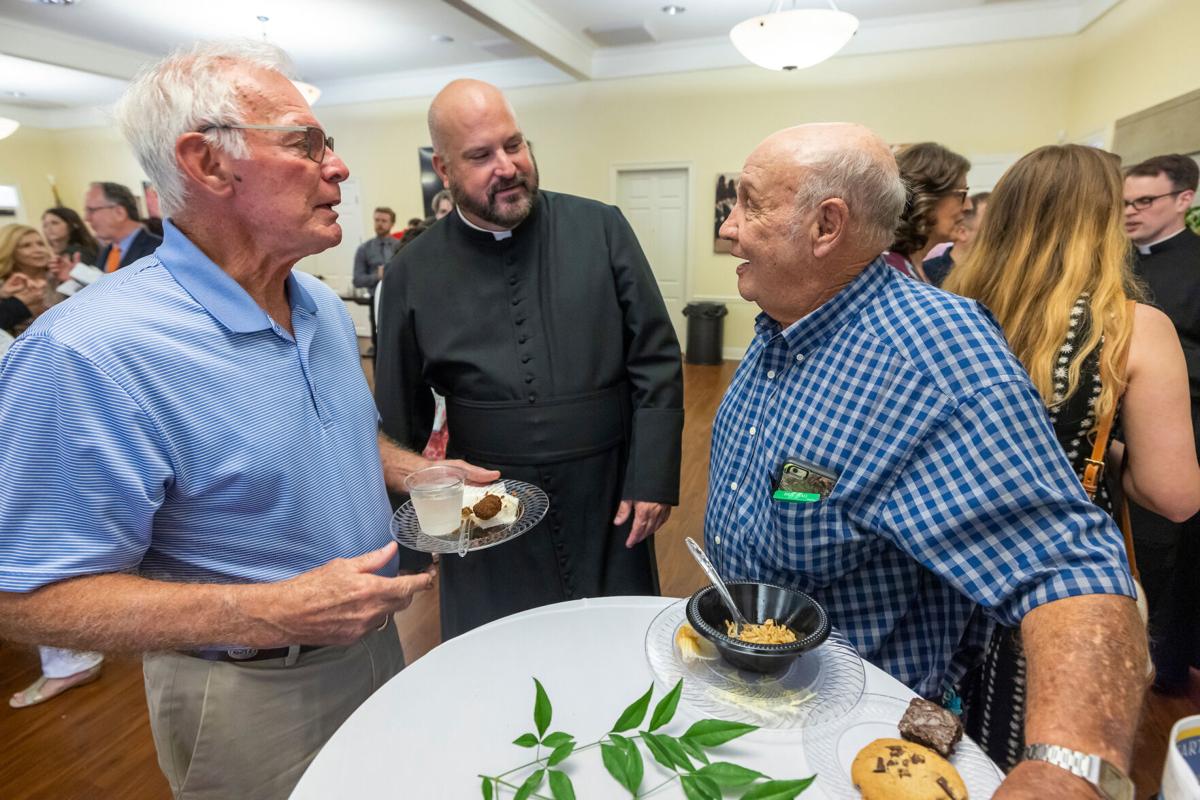 After celebrating his first Mass, the Rev. David Dawson, center, enjoys a moment with Glenn Rea, left, and JD Pellerin.

After celebrating his first Mass, the Rev. David Dawson, center, enjoys a moment with Glenn Rea, left, and JD Pellerin.

A career in a specialized area of heart surgery enabled David Dawson to earn a prosperous living. But his heart wasn't in it.

Dawson worked for nearly 20 years as a cardiovascular perfusionist — the person who helps keep a patient's heart going during bypass surgery.

"I wasn't happy," Dawson said. "I had a good job and I was making money, but I was kind of like, I guess, emotionally miserable."

After hitting "spiritual rock bottom," Dawson recommitted himself to God. He became a deacon and, in his mid 40s, decided to pursue his call into the priesthood.

Dawson, 47, said he could sense God speaking to him for years.

"I just didn't listen to him," Dawson said. "I wanted to do my own thing and kind of pave my own path, and it wasn't good."

In the early 2000s, Dawson said he finally submitted to God's plan for his life.

"And every since I said that, it's like every door has been open for me and every path has been cleared," he said. "It's like I was lost and all of a sudden I was found again. … I left that old life. I quickly learned that money is definitely not the source of all happiness."

Dawson was accepted into the priestly formation in 2018. He graduated from Notre Dame Seminary in New Orleans with a master's degree in theology in May, was ordained and in July was assigned to be an assistant pastor at St. George.

"I truly feel joy in my life right now," said Dawson, who has a daughter at LSU. "Even though I worked in cardiac surgery, and we were helping people, I didn't feel like there was a higher purpose. This gives meaning to my life."

Serving St. George, one of the largest parishes in the Baton Rouge diocese with more than 3,500 registered families, for his first assignment has been satisfying, Dawson said.

"At the end of the day, it's exhausting but good exhaustion — doing what I can to bring Christ to people all day long and to help people. There's nothing more rewarding than that," Dawson said. "I love St. George. I love the parishioners there."

Dawson is also the chaplain at his alma mater, Catholic High School, where, as a senior, he was encouraged to explore his vocation by Brother Malcolm Melcher, of the Brothers of the Sacred Heart.

When he experienced his major conversion back to the faith years later, Dawson said Melcher was the first person he called. Melcher has since been a part of several significant events in Dawson's life.

"He's walked this journey with me the whole time," Dawson said. "I attribute my vocation to God and to Brother Malcolm."

Dawson said he has learned to listen to the voice of God, finding inspiration from I Kings 19:11-13 and the Prophet Elijah, who heard God through a "tiny whisper."

"We live in such a chaotic world, a world full of noise, and distractions abound," Dawson said. "You can't hear God's voice in that chaos. You have to enter into deep, contemplative-style prayer. … You have to recognize God in the silence if you want to hear his voice. Every time I've heard his voice, that's when I hear it — when I'm truly deep into prayer, and there's silence, and the chaos is gone."