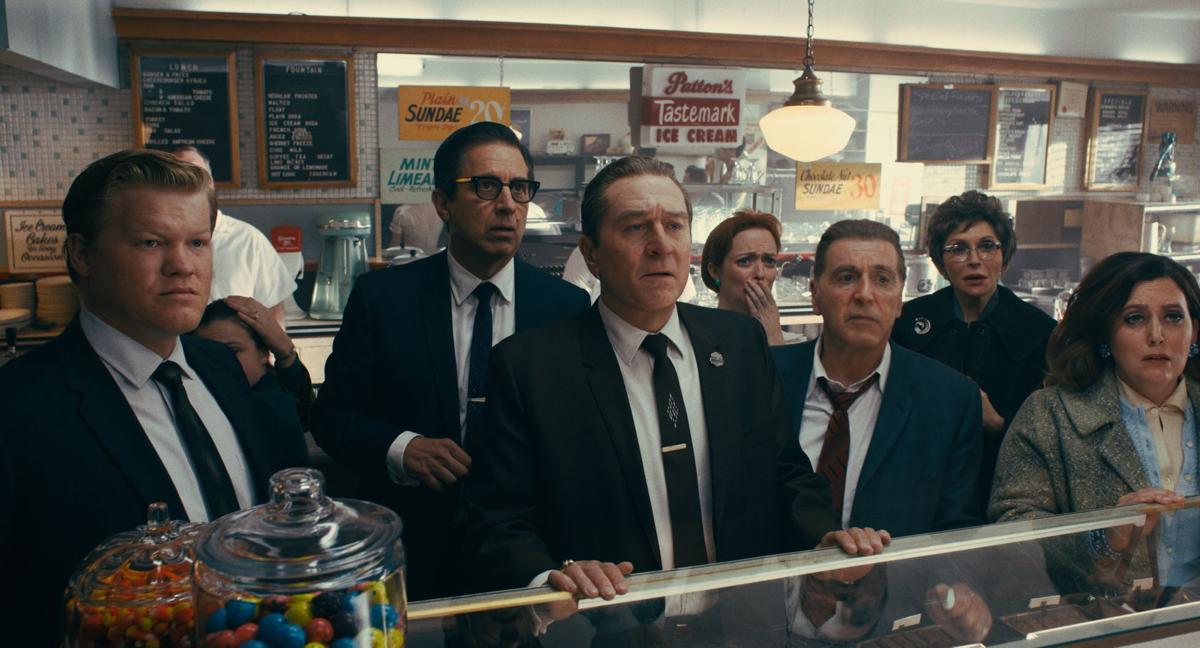 During a lunch break, Chuckie O’Brien (Jesse Plemons), from left, Bill Bufalino (Ray Romano), Frank Sheeran (Robert De Niro) and Jimmy Hoffa (Al Pacino) are shocked at the news of JFK’s assassination in a scene from 'The Irishman.' 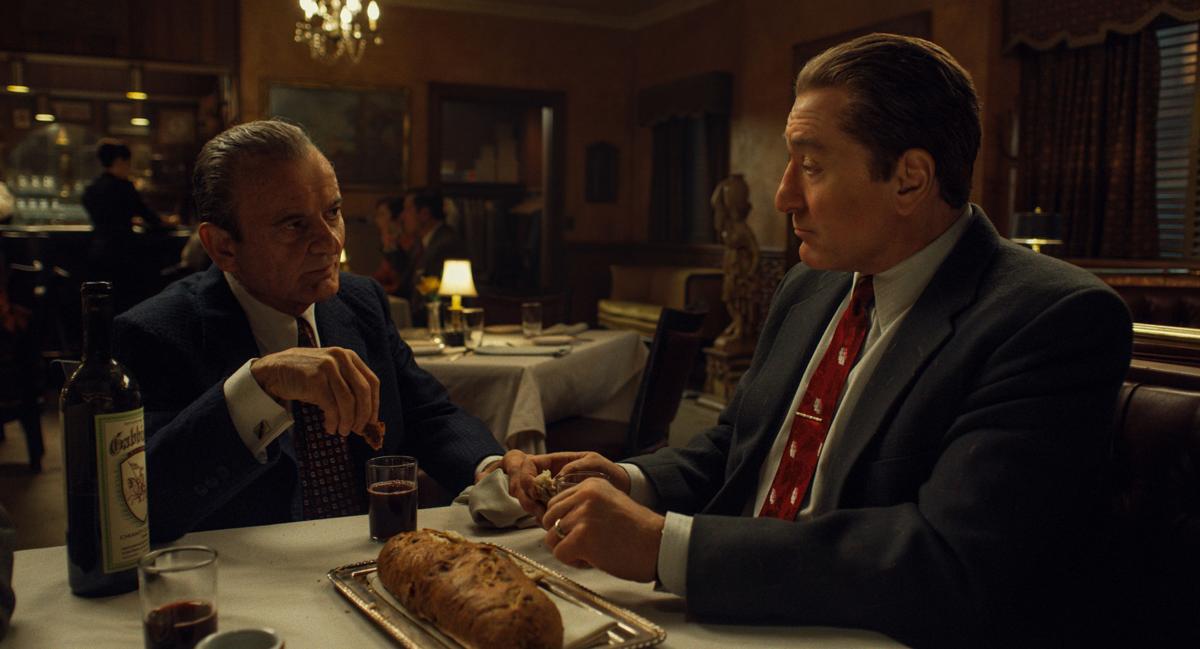 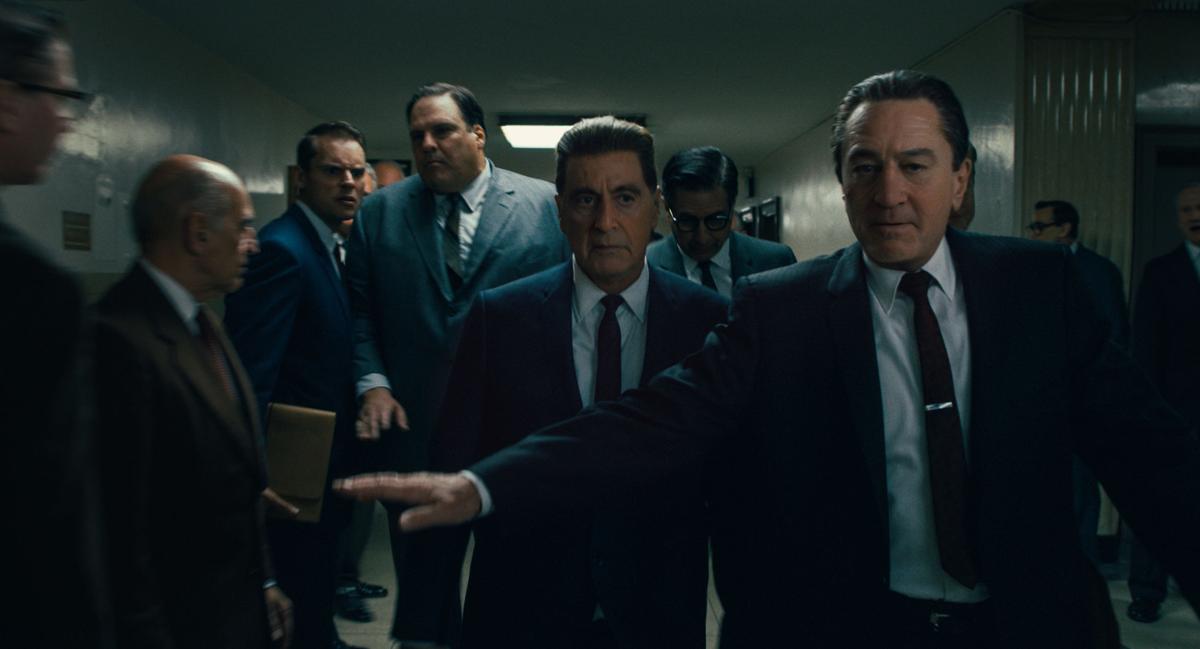 Robert De Niro, right, is both defender and confidante to Jimmy Hoffa, played by Al Pacino, center, in 'The Irishman.' 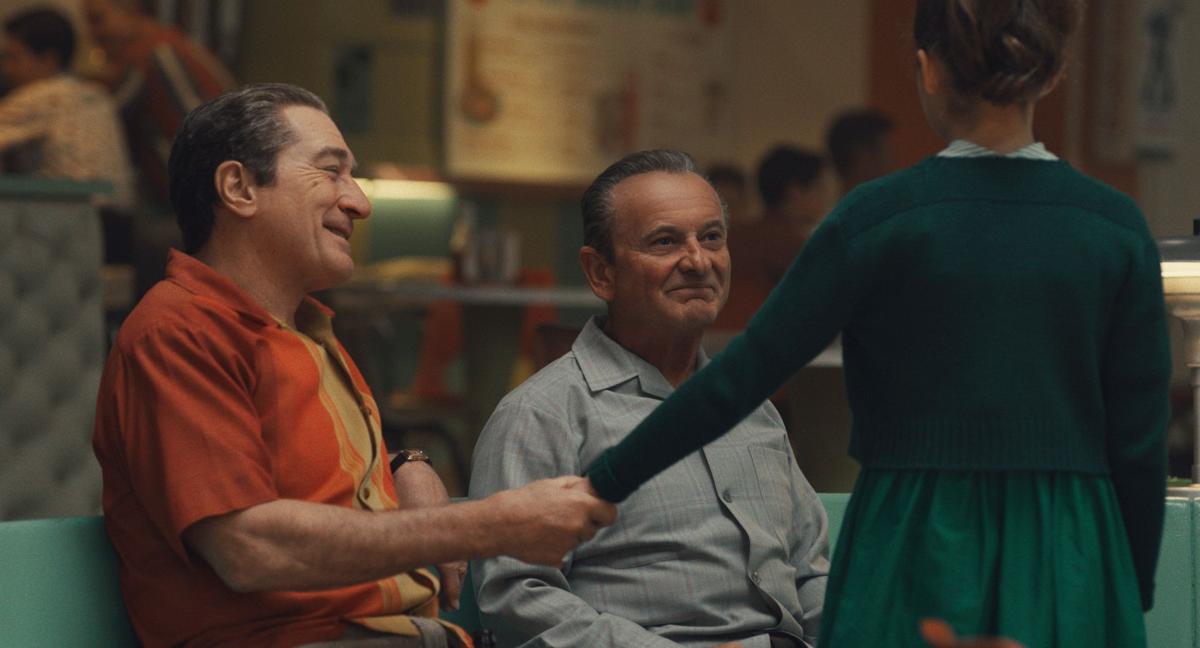 During a lunch break, Chuckie O’Brien (Jesse Plemons), from left, Bill Bufalino (Ray Romano), Frank Sheeran (Robert De Niro) and Jimmy Hoffa (Al Pacino) are shocked at the news of JFK’s assassination in a scene from 'The Irishman.'

Robert De Niro, right, is both defender and confidante to Jimmy Hoffa, played by Al Pacino, center, in 'The Irishman.'

Watching "The Irishman" is like spending an afternoon with your grandfather — that is, if your grandpa was a mobster or one of the greatest actors most famous for playing mobsters.

Director Martin Scorsese's latest is a long-winded, quick-witted and consistently entertaining eulogy for mobsters. Clocking in at 3½ hours, "The Irishman" is Netflix's latest bid for relevancy, and awards. For its nearly $160 million price tag, the streaming service couldn't have gotten a better deal.

Like "Mean Streets," "Goodfellas" and "Casino" before it, "The Irishman" is crammed with a whole lotta movie. The entire spectacle is dizzying, then the movie slows, as if allowing the audience to catch its breath. However, those final moments show stubbornly faithful men finally coming to terms with the consequences of violence.

"The Irishman" is a memory piece, with Robert De Niro as Frank Sheeran, recounting his days as muscle for union man Jimmy Hoffa (played by Al Pacino). In the midst of Sheeran discussing his tricky relationship with Hoffa, Scorsese and longtime editor Thelma Schoonmaker load the movie with asides, giving weight to Sheeran's stories.

In those tangents, Scorsese and Schoonmaker are as energetic as ever. Early on, Scorsese films a mob hit with one of his signature tracking shots. Rather than showing a shootout, the camera lands on a funeral-type wreath of flowers. Quickly, the director is off to the next tale.

In other digressions, the duo uses de-aging special effects to show a younger Sheeran fighting in World War II or driving a truck loaded with illegal guns. The CGI isn't convincing, but rather than distracting, the effects add another layer to an ultimately sad story. Memories are blurry things, and within those, Sheeran imagines himself as an immortal. Still, Sheeran was always a slower-moving character with the grace of a 60-year-old former athlete.

While the plot deals with Sheeran's rise alongside Hoffa, the beating heart is how these actors and screenwriter Steven Zaillian deal with mortality, faith and keeping up appearances in the face of the unknown. De Niro, overdue for a great performance, nails the stilted, older ramblings of Sheeran. As the movie runs, his voice is tinged with more regret. Pacino is hilariously filthy as Hoffa, finally getting a part that demands his volume. Joe Pesci comes out of retirement for a stone cold performance as Russell Bufalino, the mobster who connected Sheeran with Hoffa.

"The Irishman" is a full, detailed account of the highs and lows of history's biggest hoodlums. Scorsese isn't satisfied until the entirety of such a story is told. In the final hour, the filmmaker who has lorded over the mob genre is giving it a proper send-off. Sheeran, old and alone in a nursing home, rummages through old pictures and sees one of him and Hoffa. The nurse doesn't know who Hoffa is, to Sheeran's surprise. What meant so much to such a powerful figure from another era will be forgotten.

"It is what it is," Hoffa would have told Sheeran. In his old age, Sheeran can only mumble a faint response.

The explosions of cars and combative conversations are things we knew Scorsese could always do well; but at 77 years old, how the filmmaker explores the end is just as explosive.

A movie about "The Torture Report" will undoubtedly anger audiences. But Amazon Studios' new drama about those events, "The Report," frustrate…