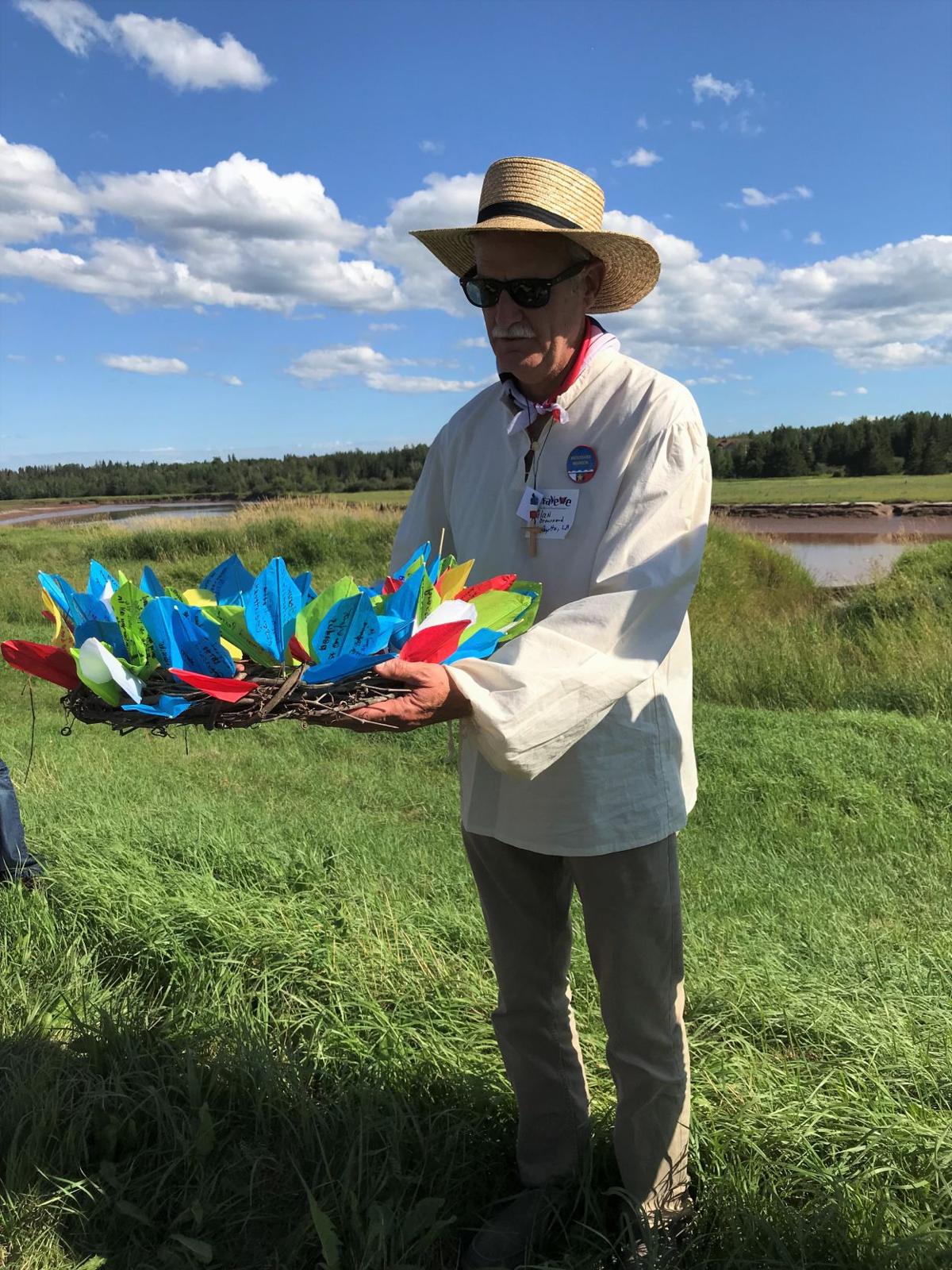 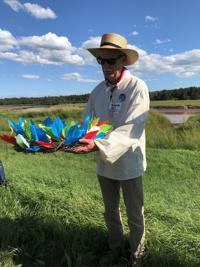 Alan Broussard of Lafayette, Louisiana, prepares to lay a wreath Aug. 14, 2019, on land near Moncton, New Brunswick, Canada, where it is believed Broussard ancestors once lived. 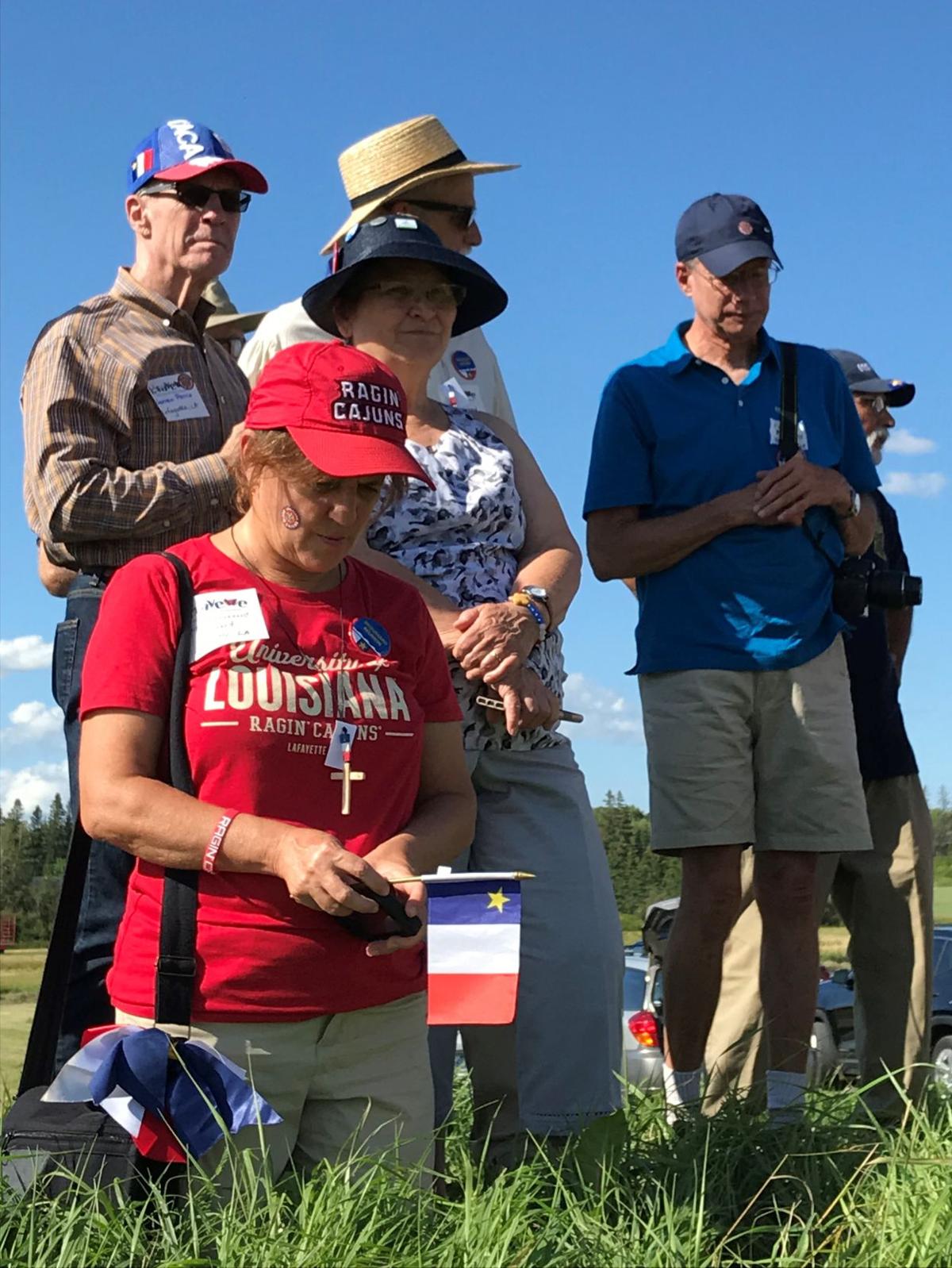 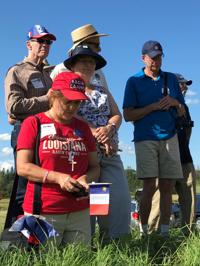 Cheryl Broussard Perret of Lafayette, La., kneels in prayer as a wreath is laid in memory of Joseph "Beausoleil" Broussard and his brother, Alexandre, during Congres' Mondial Acadien 2019 in Moncton, New Brunswick, Canada, Aug. 14, 2019. 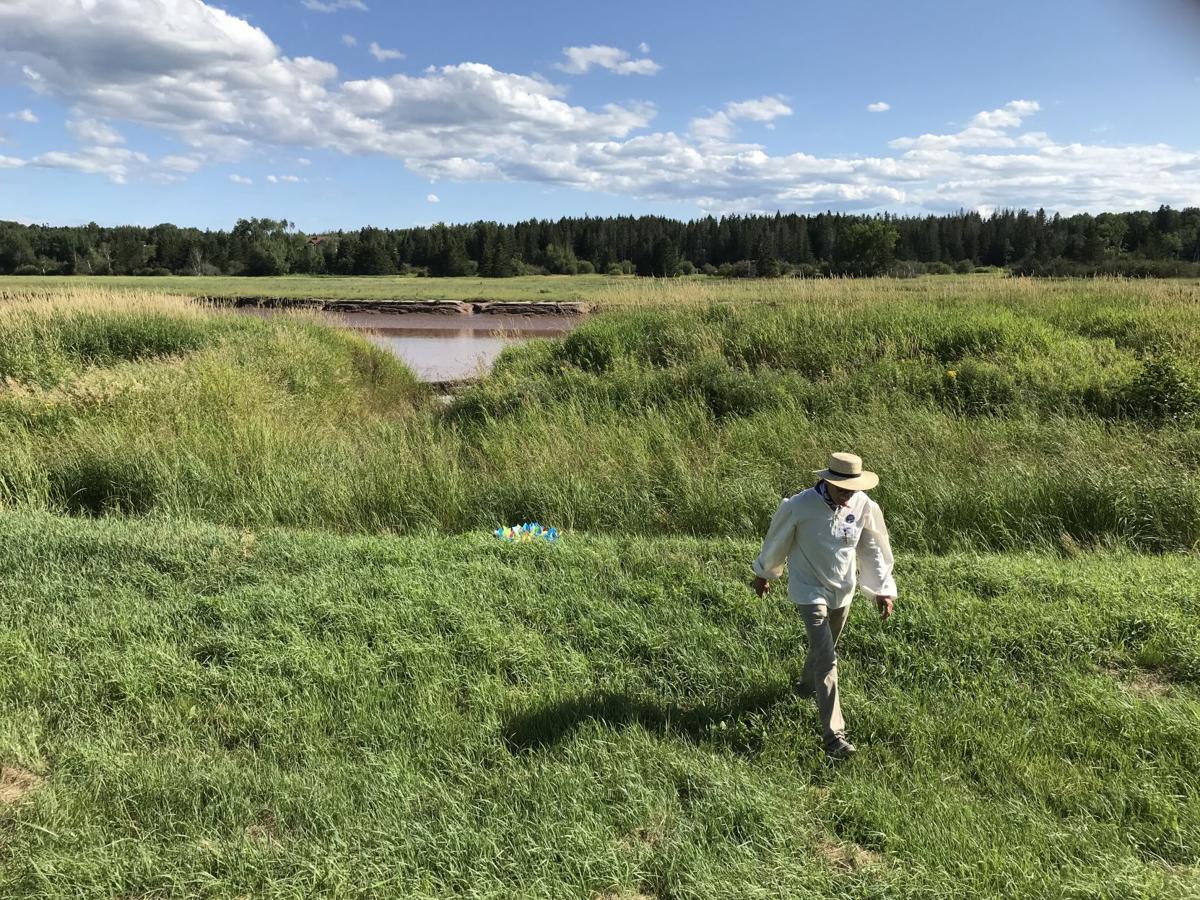 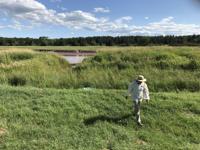 MONCTON, NEW BRUNSWICK, CANADA — A day of meeting Broussards from the United States, Canada and France ended with a somber, touching tribute to two men who fought England's expulsion of the Acadians and who brought a group of settlers to Louisiana — Joseph "Beausoleil" Broussard and his brother Alexandre.

About 60 people with Broussard in their genes gathered Wednesday to trace blood lines and learn more about their cousins and the Broussard brothers.

"Beausoleil Broussard was known universally," researcher Ronnie-Gille LeBlanc told the group. He revealed new documents that further pinpoint Beausoleil's presence and movements as he fought and escaped the British who were imprisoning and expelling the French Acadians from their homes starting in 1751. The Acadians were targeted because they refused to pledge allegiance to the British king and held fast to their Catholic religion.

Isadora Bernier flew in from France with her husband and daughter to meet up with her mother, Rose-Marie Couturier, on Wednesday at the Broussard reunion during Congrès Mondial Acadien 2019. Couturier grew up in a large family and her grandmother never spoke about her ancestors, the Acadians, Bernier said.

"My mother really wants us to know where we come from," she said. "It's a way for us to show our heritage and our values."

Bernier has always spoken French, but it hasn't always been easy.

Following the reunion, many from the Broussard clan made their way to a farm along the Petitcodiac River outside Moncton.

Standing on a levee overlooking the river and farmland, Donald Arceneaux of Lafayette pointed to a grove of trees that, according to maps and documents, may have been the beginning of Beausoleail Village, a settlement of Acadians including the Broussard brothers.

"There's no question the Broussards would have paddled and walked these lands," he said. "We're on the land of our ancestors."

Dressed in clothes the early Acadians would have worn, Alan Broussard of Lafayette reverently held a wreath made of paper leaves signed with the names of the Broussard descendants present, along with prayers and their thoughts about their heritage.

According to legend, some of the willow trees on the land, he said, grew from seeds carried by the Acadians from France that they planted there.

"These leaves," he said before laying the wreath on his ancestor's land, "represent their heritage that will last at least as long as these willow trees."

The residential real estate market in Lafayette Parish may have hit a maturation point, analyst Bill Bacque said this week.

Northfest of Ideas: Northside economic development programs on the horizon

Three Lafayette companies are among 37 companies across Louisiana that made Inc. magazine's fastest-growing U.S.-based privately-held businesses.

A graceful football tackle is about as unexpected as upscale tailgating grub.

MONCTON, NEW BRUNSWICK, CANADA — A day of meeting Broussards from the United States, Canada and France ended with a somber, touching tribute t…

Michael Doumit may be most synonymous with hospitality in Acadiana.

MONCTON, NEW BRUNSWICK, CANADA — In case the British didn't already know it, the descendants of the Acadians they drove out of New Brunswick, …