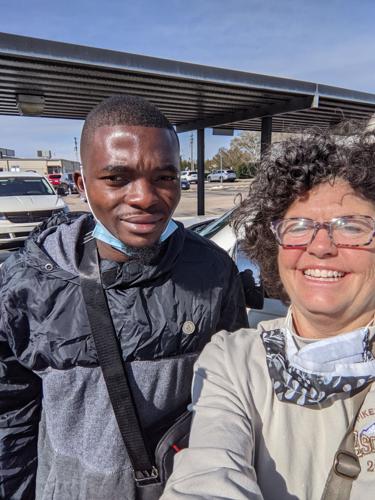 Michelle McFadyen, right, is part of a network of volunteers who help immigrants who are released from Louisiana detention centers and need help connecting with their sponsors 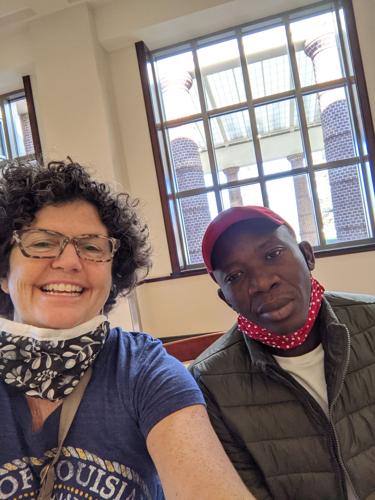 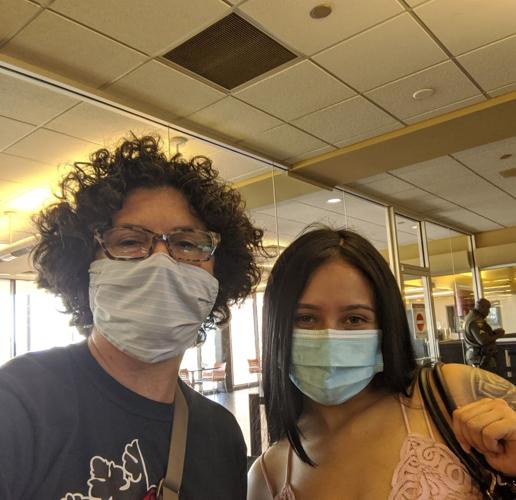 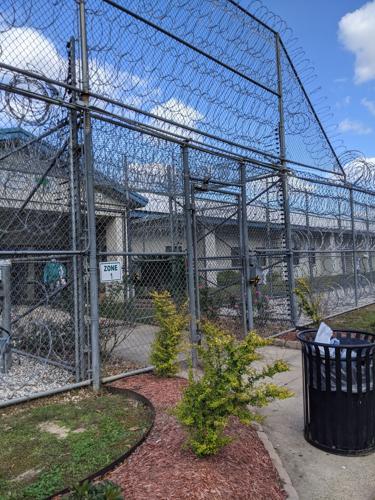 Immigrants in the process of seeking asylum are often released from Louisiana detention facliities with no way to communicate or reach their sponsors.

Michelle McFadyen, right, is part of a network of volunteers who help immigrants who are released from Louisiana detention centers and need help connecting with their sponsors

Immigrants in the process of seeking asylum are often released from Louisiana detention facliities with no way to communicate or reach their sponsors.

One of my favorite verses is Hebrews 13:2. “Be not forgetful to entertain strangers: for thereby some have entertained angels unawares.” The verse always makes me consider the Christmas story and the innkeeper who found a stable for Mary and Joseph. I’ve wondered if that same scenario presented itself today, who would help them — this week I found an answer to that question.

Karen Alford, of Eunice, describes herself as someone who likes to help people in transition. Michelle Lafleur MacFadyen, of Lafayette, says in the back of her head, she always thought she wanted to do missionary work on the border.

When she learned what was going on at the U.S. Immigration and Customs Enforcement Detention Centers in Louisiana, MacFadyen, who grew up in Eunice, said she was shocked to learn hundreds of women were detained 15 minutes from where she grew up.

“That’s when I realized that I don’t need to go to the border,” MacFadyen. “I can help here.”

The immigrants the women help came to this country seeking asylum. Many fear returning to their home countries where they could be imprisoned or worse.

Neither Alford or MacFadyen, both 54, say they ever expected to be key players in what is a legal version of a modern-day underground railroad of sorts. During the last year the women have, often at a moment’s notice, dropped whatever was going on in their lives and driven to places like Basile, Pine Prairie or Jena, to pick up dozens of immigrants released from ICE detention centers — a few had been granted asylum and others awaited court dates.

Those still in the asylum process, most of whom speak little to no English, are ordered to go to their sponsors (usually in another state). Released from the detention centers in the middle of nowhere with almost nothing — no money, no phone, no transportation to get to a bus station or airport, the immigrants have no sense of where to go or how to get there.

Enter Alford, MacFadyen, Nell Hahn, also of Lafayette, and a host of other volunteers who do what they can to help provide whatever assistance necessary. The women are a part of a state network of volunteers (laaid.org) and a national network called Freedom for Immigrants (freedomforimmigrants.org). They work to assist immigrants by connecting them with legal help, seeking volunteers to write letters or send books to those being held, making backpacks of essentials to give to those released and transporting or providing a place for recently released immigrants to spend the night after their release.

Hahn, a Lafayette attorney, says that Alford has been a godsend.

“Karen lives in Eunice — that’s just a short distance from Pine Prairie and Basile,” Hahn said. “Most of these detention centers are in the middle of nowhere. The facilities don’t help the immigrants find their way. They just release them.”

When the immigrants are released in Basile or Pine Prairie, chances are that one of these ladies is there — often waiting because no specific times are given regarding the actual release.

“But we don’t let them discourage us. We just wait,” said MacFadyen.

Because the immigrants are usually released late in the day, Alford often takes the immigrants — people she has never met before — to her home, gives them her guest bedroom, tells them they are welcome to whatever food they want and shows them where the computer is.

“They’re not really interested in food,” Alford said. “Many of them are younger people. They will spend hours on the computer listening to music, feeding their souls again.”

She said they also go to Facebook to look up people.

Neither Alford or MacFadyen say they’ve felt any fear in picking up the strangers or, in Alford’s case, in hosting them in her home.

“They are so beaten down,” MacFadyen said. “When I pick them up, they finally feel relieved — sighs of relief come from them. They look out the window and say, ‘So, this is America.’”

MacFadyen said that when she picked up one Cuban immigrant, he opened the car door, knelt and kissed the ground.

“There is no feeling of power from them at all. It feels like you’re picking up a beaten dog — maybe not that strong,” MacFadyen said. “They’re grateful. They keep saying God bless you.”

Often, the only way to communicate is via a phone translating app.

Alford said one lady from China didn’t have enough money to get to Maryland where her sponsor was.

“She spoke maybe three words in English,” Alford said. “She was so sweet — just a loving, nice person. She made an interesting meal out of things from my yard, leaves and things that I didn’t know were edible.”

Once the Chinese immigrant made her way to Maryland, her sponsors spoke English. (Many of the immigrants are able to travel via a program called Miles 4 Migrants — miles4migrants.org.)

“Her sponsors invited me to Maryland to visit. Even her sister in China invited me to see her,” Alford said. “I’d have interesting places to go if I could afford to travel!”

Alford said many of the immigrants are very spiritual.

“One fellow knelt in front of a crucifix for an hour,” she said. “He was Chinese also.” (His Christian faith could play a role in his seeking asylum.)

MacFadyen says the spiritual component of the work is important to her, her Catholic faith and Cajun roots.

“I’m an engineer, bakery retailer and mother under all that. I never thought, ‘One day I’m going to help immigrants.’ That growth came from my own faith seeking. …As I’ve grown in that faith, I’ve realized the social justice principals that come from deep roots in our faith. The Bible says that I welcome the stranger,” MacFadyen said. “It’s pretty compelling to me that I need to do something in this realm.”

She said that maybe one of the reasons she’s not afraid to do this work is that she sees the face of Christ in the people she assists.

“Our strong Cajun culture — we were thrown out. We were strangers finding a home. If anyone should understand their plight, it’s Cajuns,” MacFadyen said. “Evangeline’s Gabriel was my ancestor. I see the connection of people forced out of their land. That’s the story I see.”

In this week, as so many wait for Christ, perhaps Alford and MacFadyen can take comfort in knowing where to look.

Note: Anyone who would like to assist should email laadvocatesforimmigrants@gmail.com.

While the novel coronavirus pandemic has been a Grinch this holiday season, AJ and Vanessa Miller are reminding their Antigua Drive neighbors …