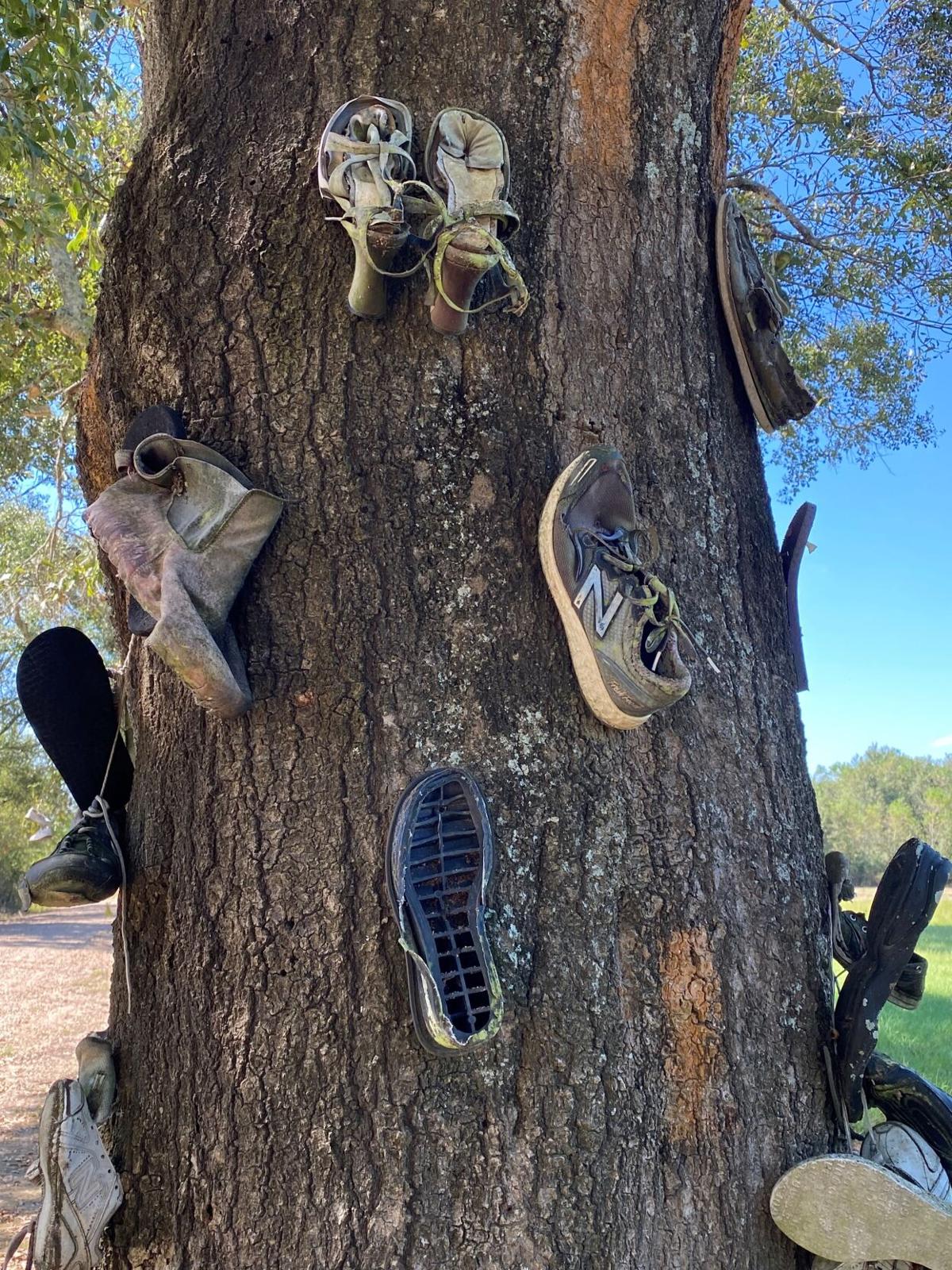 The Tree of Soles 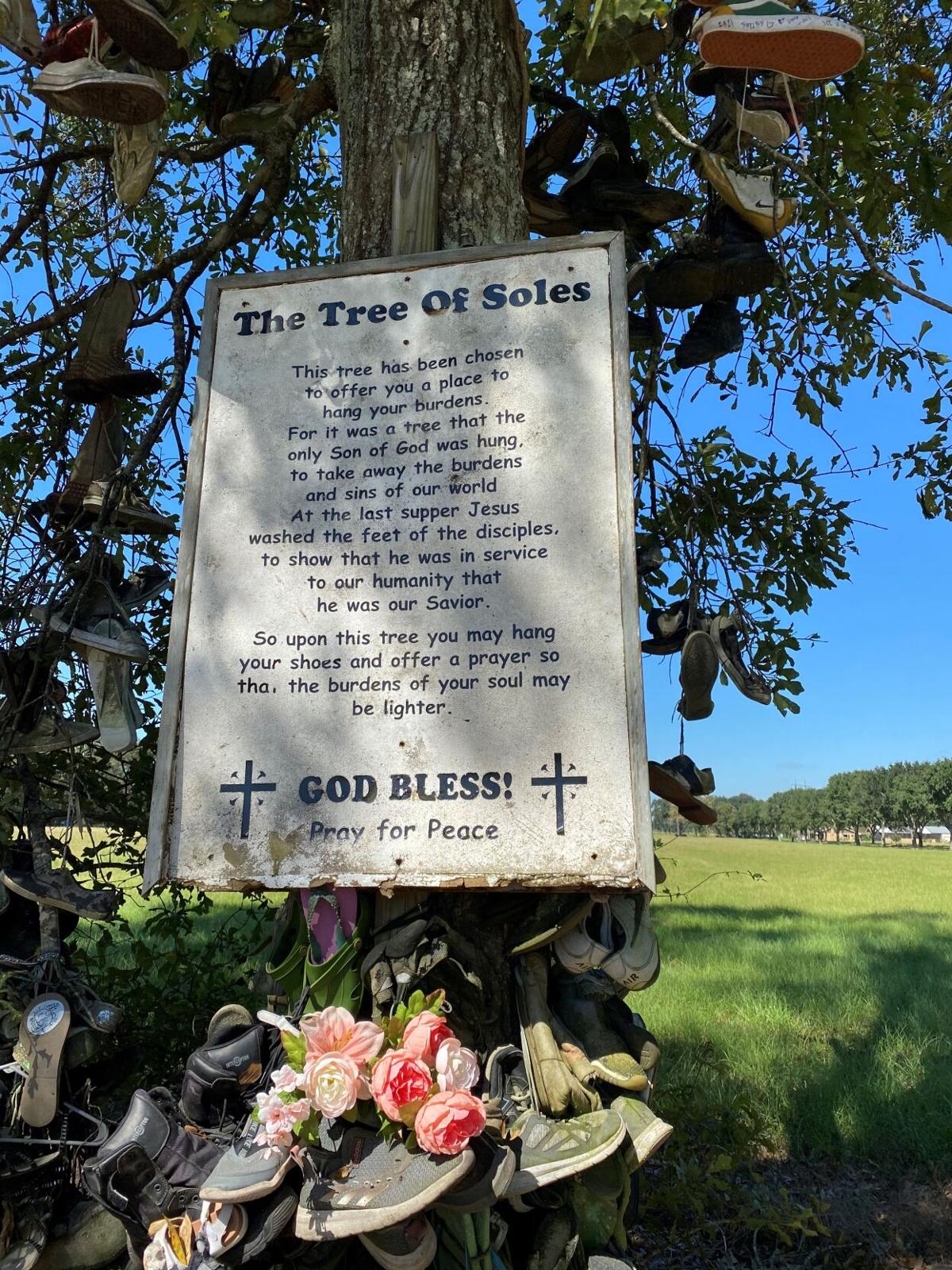 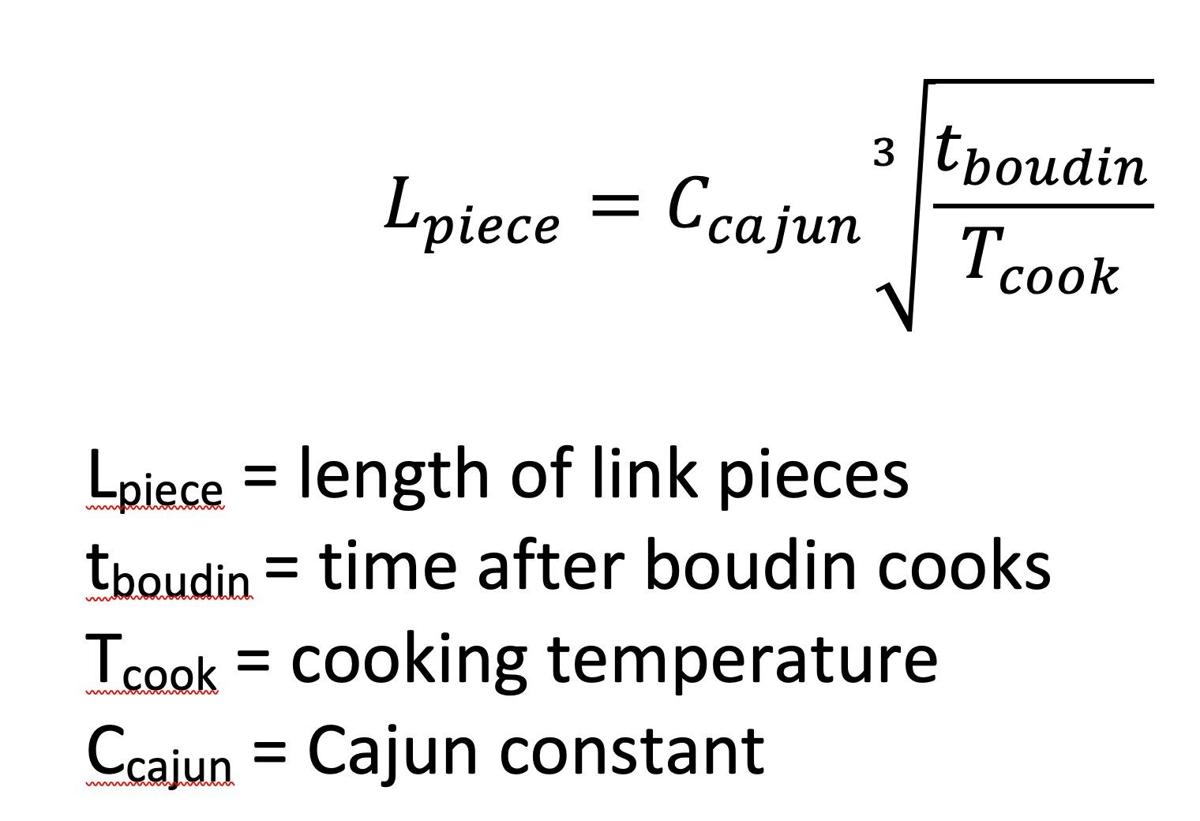 The Tree of Soles

When my friend David D’Aquin texted me around 10 a.m. Sunday morning, he asked what I had going on. Having just finished one semester of grad school two days earlier and about to start a new semester the next day, I told him that it was my first day off in a while and I was thinking about going metal detecting.

I then asked if he had access to land where we could get permission to go — or did I need to find some. He said he would ask his uncle. An hour later we were on the road.

The joy of a spur-of-the-moment outing, the beauty of the day with its signs of fall and the company of a good friend on a new adventure put my heart and head in a happy place. David and I have not had a lot of time for fun lately and needed to catch up on all the goings-on of life.

Our first stop was for drive-through boudin, where we learned a new Cajun Fact.

After we ordered our boudin, the nice lady asked how we would like it cut — halves or thirds. Nonchalantly, we asked that it be cut in thirds.

When we got to the window to receive our prize, the same lady who had taken our order hands us the big box of boudin, with a look of deep compassion on her face.

She started with, “I am so sorry.”

She was so upset looking that David and I went on high alert, thinking something was seriously wrong. She continued.

“I know we told you we could cut it in thirds, but the boudin is too fresh,” she said. “We could only cut some of it into thirds. The rest is in halves. It’s just too fresh. It started busting when I tried to do thirds. I am so sorry.”

This woman’s sincerity and concern over the length of our boudin was heartfelt.

David and I were belly laughing before we reached the road. Learning this Cajun Fact regarding the relationship between the freshness of boudin and its effects on the limits on a boudin link kept us laughing for 20 minutes. Whether the funniness translates, I’m not sure, but I’ve continued to laugh about it all week.

I’ve wondered if creating a Cajun math formula regarding boudin length would be possible. So, I explained the situation to my childhood friend Mike Kelso, who happens to be a mathematician. He developed a formula, shared in the images. Mike’s mathematical formula should solve for any future boudin length emergencies.

Having friends like Mike and David not only makes life more fun, but it turns shared experiences into moments that stay with us for years. All that fun happens because both of them said, “Yes” to an unusual suggestion!

On Sunday, David and I drove on to his uncle David Sonnier’s home, out from Scott, and toured the family property. Sonnier was able to show us the live oak trees where his grandfather explained that the water had stopped in the 1927 flood. His grandfather told them that friends in Henderson had traveled to see them by boat and tied up the boat to the giant trees. For a half hour, the two Davids covered ground discussing the happenings of people with names like Stinker, Gingham, Catfish, Possum and Hardtack. Then we did a little metal detecting.

Metal detecting is an exercise in hope. A little beep alerts you to something, but you don’t know what — maybe a bottle cap or maybe a coin from 1832. You have to keep at it to find whatever it is. Eventually, you may find a giant bolt or a copper pipe, an old thimble, military button or a rusty hinge. The mystery that lies between the beep and the reveal is all about hope and hard work. Metal detecting’s metaphors easily bleed into the rest of life.

After our digging excursion, we loaded up to head to our respective homes, but before we did, my friend David showed me another wonder near his uncle’s home, The Tree of Soles. Alongside the road, an old tree has a sign on it that reads, “This tree has been chosen to offer you a place to hang your burdens. … So upon this tree, you may hang your shoes and offer a prayer so that the burdens of your soul may be lighter.” And, of course, the tree is covered in shoes of all shapes, sizes and colors.

Saying yes and unexpected Sunday adventures are good for the soul.