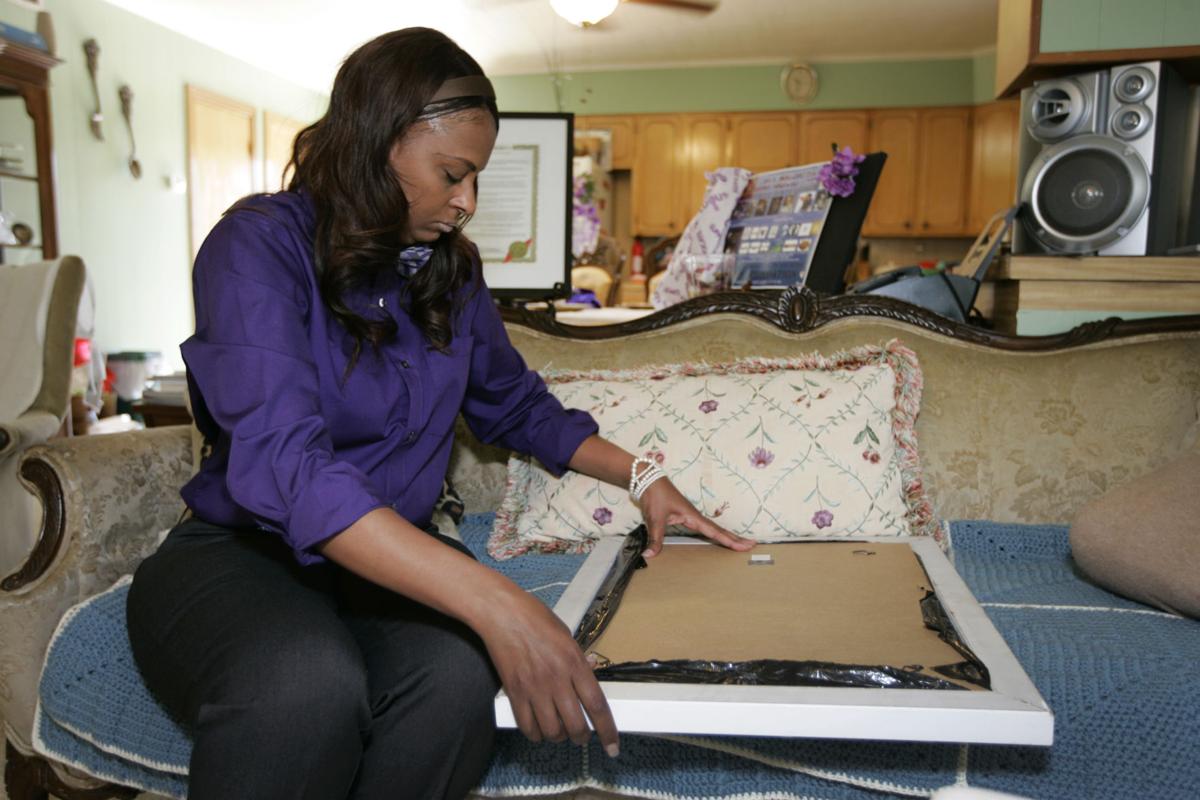 Advocate Photo by JOHN ROWLAND - Anazia A. Sam is framing a lupus awareness poster from an event she and her sisters organized in May. Lupus is an autoimmune disease that can be chronic, damaging joints or organs. ORG XMIT: 10026701A 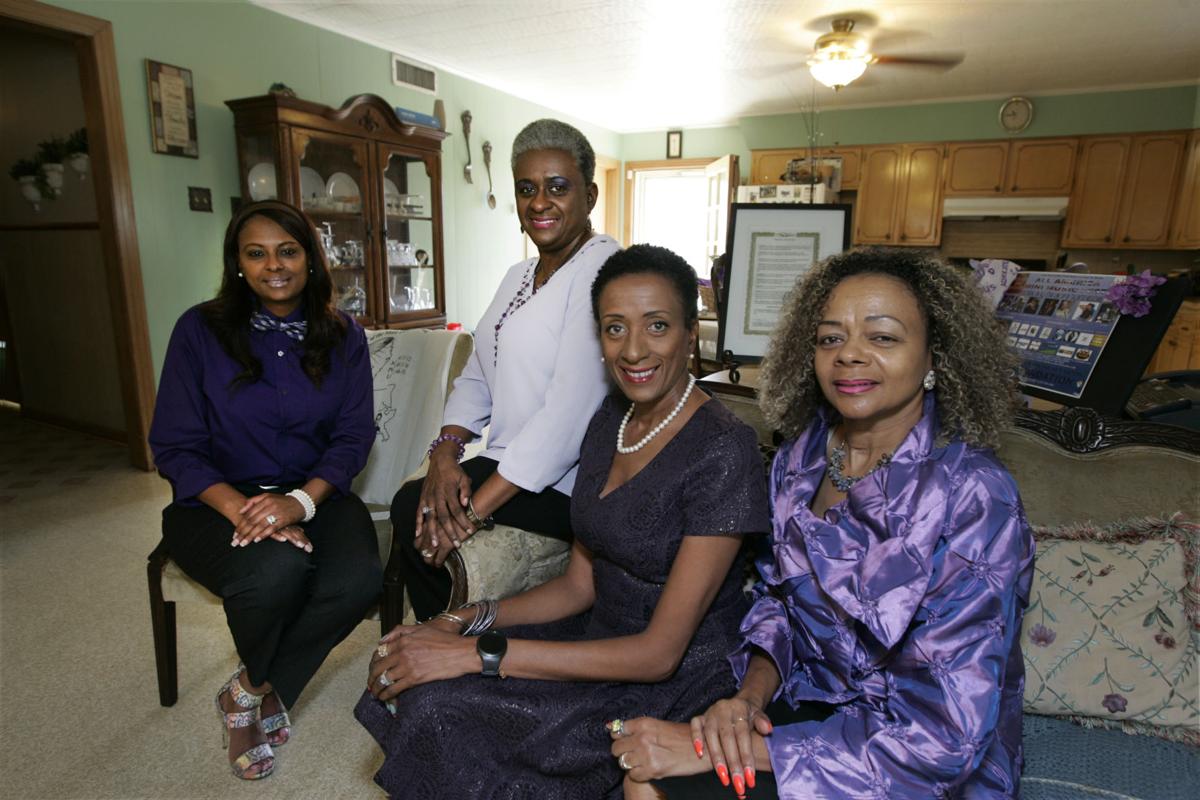 Advocate Photo by JOHN ROWLAND - Four sisters (left to right) Anazia A. Sam, Gail A. Lee, Martha A. Weatherford and Brenda Andrus are working together to raise awareness of lupus. Lupus is an autoimmune disease that can be chronic, damaging joints or organs. ORG XMIT: 10026701A

Advocate Photo by JOHN ROWLAND - Anazia A. Sam is framing a lupus awareness poster from an event she and her sisters organized in May. Lupus is an autoimmune disease that can be chronic, damaging joints or organs. ORG XMIT: 10026701A

Advocate Photo by JOHN ROWLAND - Four sisters (left to right) Anazia A. Sam, Gail A. Lee, Martha A. Weatherford and Brenda Andrus are working together to raise awareness of lupus. Lupus is an autoimmune disease that can be chronic, damaging joints or organs. ORG XMIT: 10026701A

For the four Andrus sisters — Gail, Brenda, Martha and Anazia — lupus has always been a part of their lives even though they never contracted it.

As children, they did not know the name of the disease, nor did they understand its life-threatening complications.

But after lupus claimed the life of the woman who gave birth to three of them -- and much later the life of the stepmom who raised them and added a fourth sister to the family -- they resolved to try to do something about it.

The "something" was forming the 4A’s Sisters Lupus Foundation, after their maiden namesake, and dedicating themselves to educating the community about the deadly disease.

To spread the word and support, the sisters decided to host an annual event, which serves as a fundraiser. The event allows them to host workshops, support groups, and programs on lupus. It also lets them provide small financial scholarships to lupus patients in need.

This year’s community benefit, set for 4 p.m. on Sunday at the Warehouse, is the All America Mini Music Fest. It will feature Major Handy and other talented musicians, including the sisters’ brother, known as “Uncle Fallay.”

Since forming the foundation, the Andrus sisters’ goal has been to make sure families do not suffer needlessly because of lupus, nor do they live in ignorance.

That was not the case with their own family when three of the sisters’ mother, Dorothy Felix Andrus, died of lupus at age 30 in 1965.

“They didn’t know anything in the 1960s,” said the eldest sister, Gail Andrus Lee, who has served 37 years as an LPN at Our Lady of Lourdes Regional Medical Center.

What Gail, and her five younger siblings, including three brothers, did know at the time was that their mother was constantly in pain, and that she exhibited the “butterfly patch,” one of the disease’s symptoms. The phrase refers to the shape of a rash that often appears on the face of someone who suffers from lupus.

Other symptoms, according to the Lupus Foundation of America’s website, include extreme fatigue, headaches, painful or swollen joints, fever, anemia, edema, and hair loss.

And according to the website, lupus has a tendency to mimic other diseases’ symptoms, and therefore, is known at times as the “Great Imitator.”

Lupus.org describes lupus as “a chronic, autoimmune disease that can damage any part of the body (skin, joints, and/or organs inside the body).” The website also describes it as “a mysterious and complicated disease that is difficult to diagnose and challenging to treat.”

Moreover, according to the Foundation’s website, no one is immune to lupus, but people of color are more susceptible, including African Americans, Hispanic Americans, Native Americans and Asian Americans. Lupus.org estimates 1.5 Americans have lupus, and each year, there are more than 16,000 new cases are reported.

While lupus has been in the news lately because of pop star Selena Gomez’s bout with it, the Andrus sisters did not understand the disease as children, nor why their mother was suffering.

“One day she could move, and the next day, she couldn’t,” said Gail who assumed the mother role at age 10 for her younger siblings.

Brenda Andrus, who’s known today as “Busy Bee” for her community involvement since retiring from the Lafayette Consolidated Government, remembers those days well.

“She was hurting so much, she had to stay in bed,” she said. “My daddy didn’t understand what was going on.”

Their father, John Andrus, worked hard to support his family, which was also compounded by two children suffering with asthma.

The Andrus sisters say that their mother didn’t last for long with lupus — they estimate she died within two years.

Yet, according to her daughters, Dorothy Felix Andrus had no idea what was happening to her because of the limited health care available for African-Americans at the time.

“Nobody could tell her exactly what was going on,” Gail recalled. “It was like a rollercoaster, up and down.”

Martha Andrus Weatherford, who today owns Weatherford Academy in Westwego, was just a tot at the time. But she remembers the family being very prayerful and having a strong faith.

When their mother passed, the sisters remember everyone wanted them. But their father was determined to keep the family together. He also ended up adding to the family when he later married Leola Roy, and they gained a baby sister, Anazia Andrus-Sam, today a sergeant major of operations who has served in the U.S. Army for 27 years.

For the older children, it was déjà vu when their stepmother and Anazia’s mother became a victim of lupus in her latter years. In 2007, Leola Roy Andrus died of lupus at the age of 64.

As the baby of the family, Anazia serves today as the president of the sisters’ foundation, which falls under their brother Glenn’s GMA Foundation. Even though they may have teased Anazia as the youngest newcomer to the family many years ago, it is more than evident that her sisters have faith in her to lead them all now.

And no matter how busy their lives get, or the fact that not everyone lives in town, the Andrus sisters remain united by their commitment, and their desire to fulfill their foundation’s motto: "Live life to the fullest, laugh often, love unconditionally.”

Their lupus support group is held at 5 p.m. on the third Thursday of every month at the Martin Luther King Center here, and everyone is welcome.

Until then, the sisters want the public to know people with lupus are living longer today. And they want people to know that they should not be afraid.

But perhaps most importantly, she added, “And know you’re not alone.”