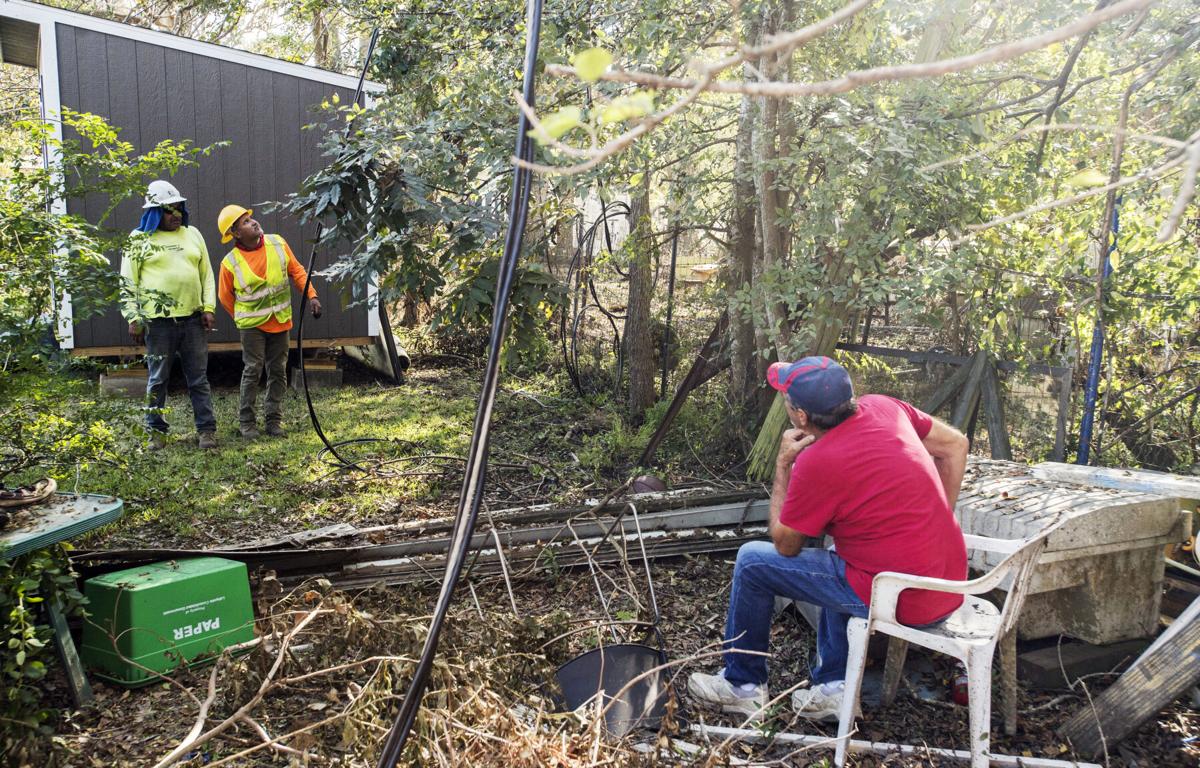 Randy Bourque watches as workers with ABC Tree Service work on getting trees out of the way so linemen can replace a damaged utility pole behind his home Wednesday, October 14, 2020, in Duson, La. 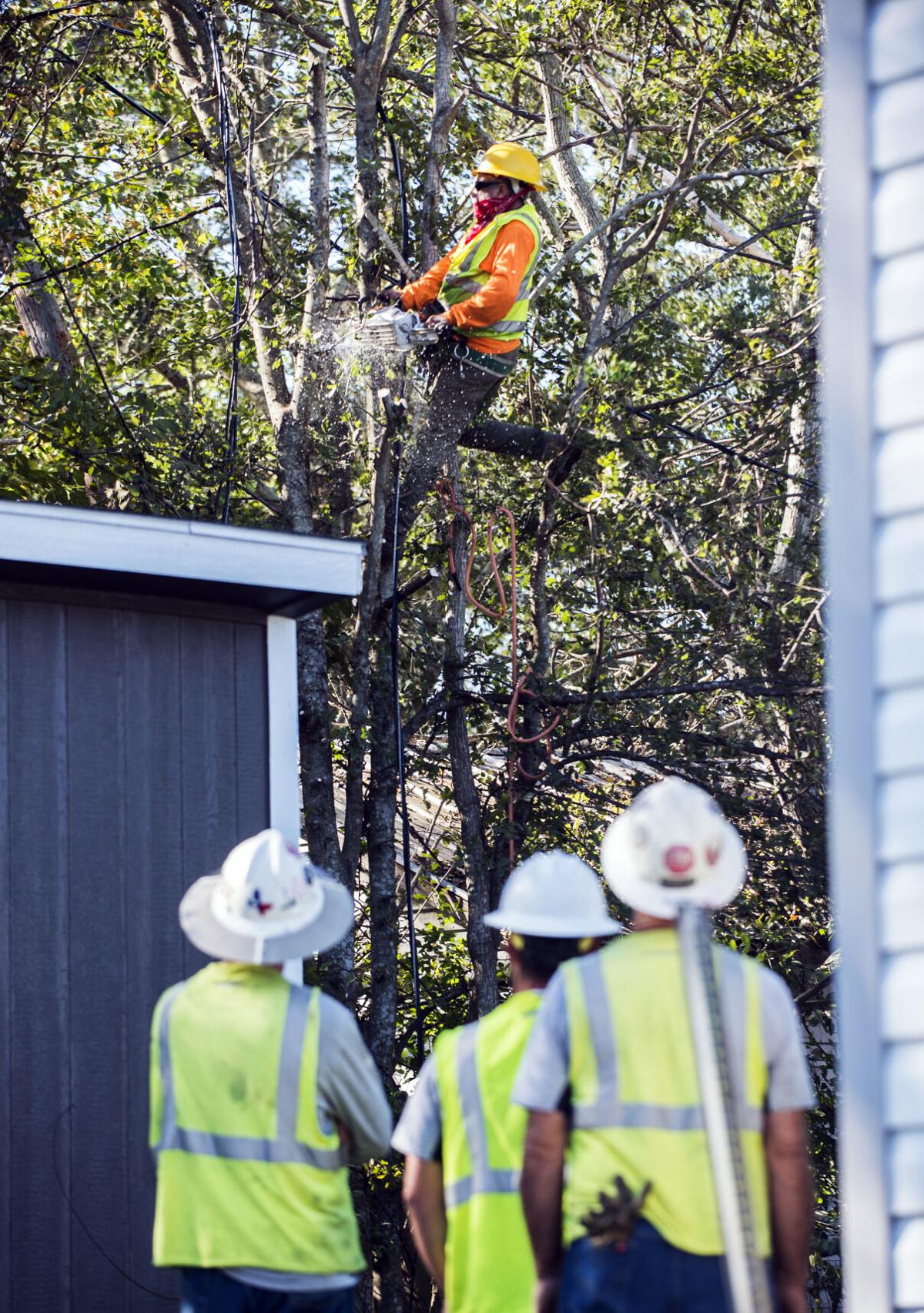 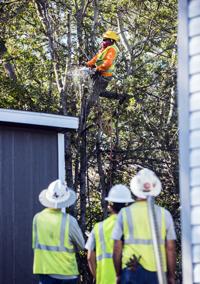 Crew members with Scobee Powerline from Missouri watch as an ABC Tree Services worker cuts limbs away from a damaged utility pole that will be replaced Wednesday, October 14, 2020, in Duson, La. 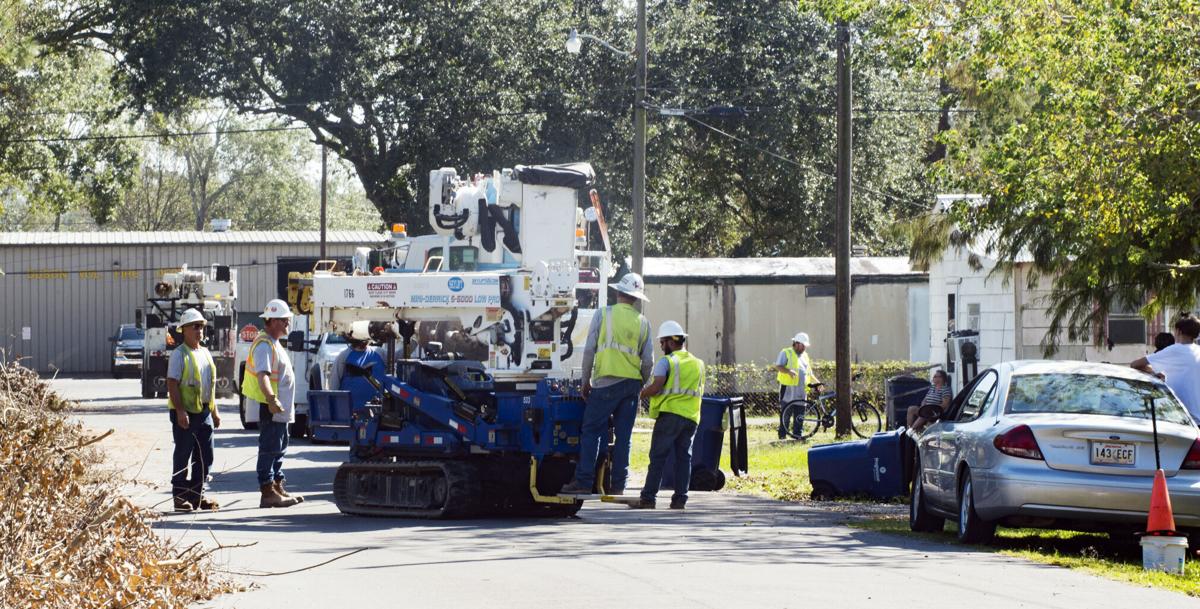 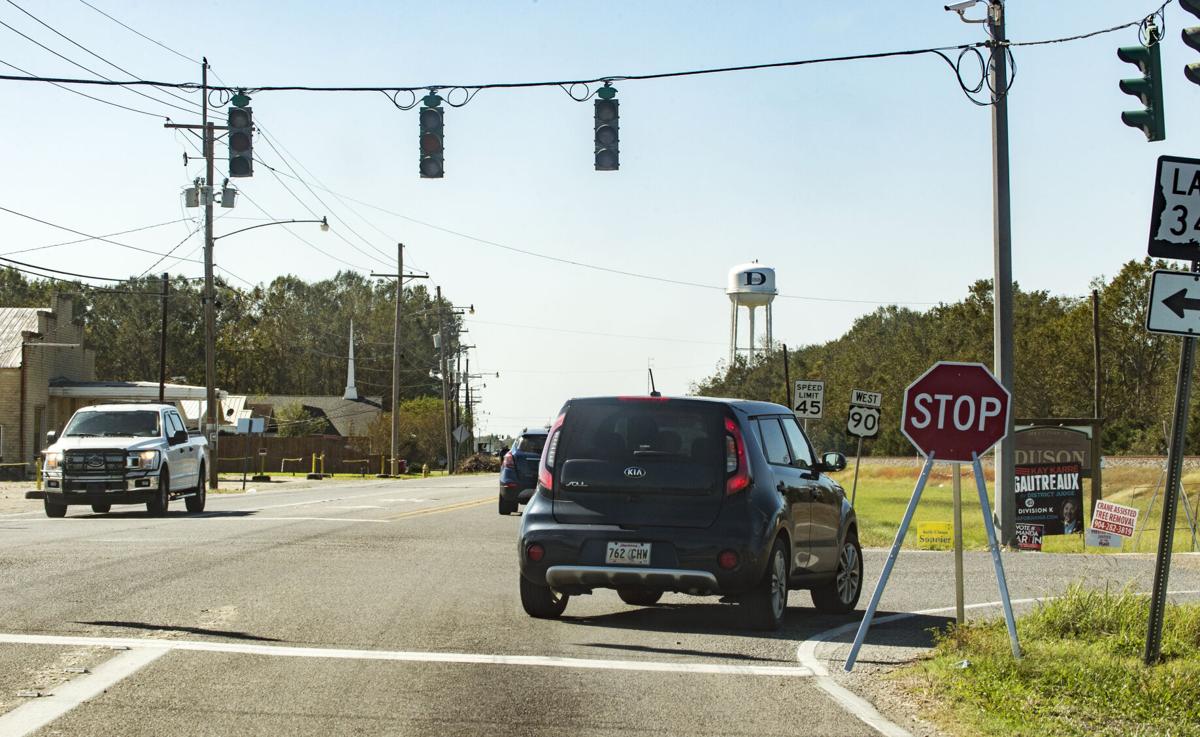 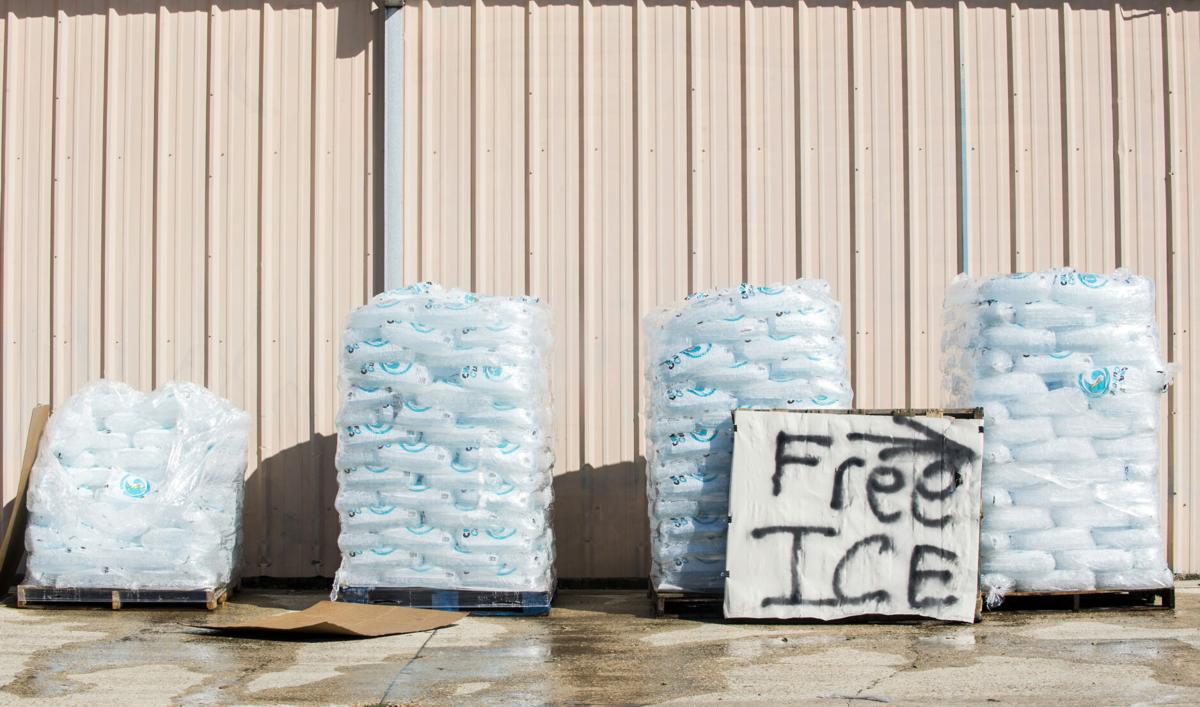 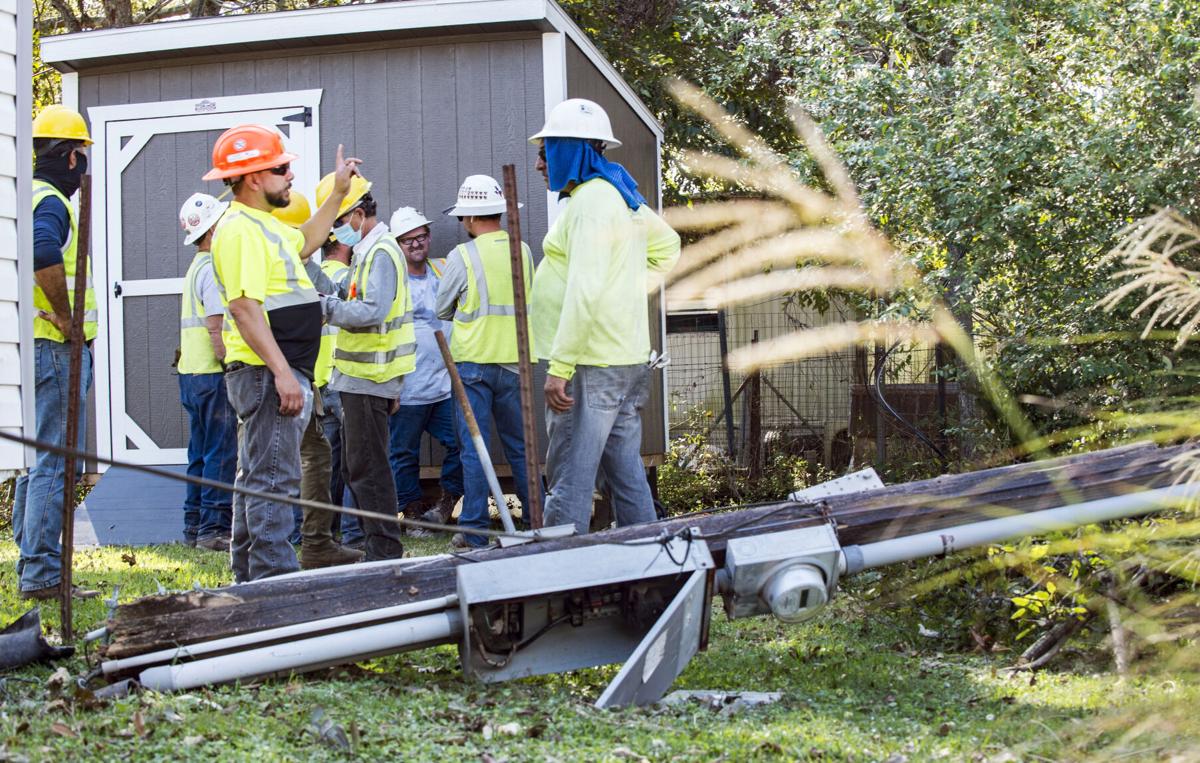 Workers with Scobee Powerline and ABC Tree Services discuss their plan to replace a damaged utility pole in a residential area Wednesday, October 14, 2020, in Duson, La.

Randy Bourque watches as workers with ABC Tree Service work on getting trees out of the way so linemen can replace a damaged utility pole behind his home Wednesday, October 14, 2020, in Duson, La.

Crew members with Scobee Powerline from Missouri watch as an ABC Tree Services worker cuts limbs away from a damaged utility pole that will be replaced Wednesday, October 14, 2020, in Duson, La.

Workers with Scobee Powerline and ABC Tree Services discuss their plan to replace a damaged utility pole in a residential area Wednesday, October 14, 2020, in Duson, La.

Even so, the power outage has been devastating to many Duson residents like Michelle Washington, who sticks to a tight budget to support her four children.

The family lost all the food in their refrigerator and deep freezer.

"I live on a budget," Washington said. "It's hard when you can't afford a generator."

The single mom, who works as an in-home caregiver, has relied on help from family and town leaders to make ends meet. She was cooking dinner over a propane burner Wednesday evening for her children.

“My mom and aunt have been helping out,” Washington said. “They’ve been cooking or giving us something to cook outside, and that’s how we’ve been making it.”

Jamie Angelle, spokesperson for Lafayette Consolidated Government, said power transmission in Duson, located at the Lafayette-Acadia parish line, was hampered by felled trees and other problems as Delta swept through the area.

“The western edge of the parish got more of the brunt of the storm,” Angelle said. “Anytime folks are without power, it’s an issue.”

The town of Duson has been providing bottled water, bags of ice and hot meals to residents.

"It's been a tremendous help," said Brittany Koch, who lives in Duson with her husband and 7-year-old son. "The ice keeps our food cold, and today we were served lunch by the mayor — jambalaya and green beans."

It’s been helpful, but the demand has sometimes been greater than the availability.

“The town is doing as much as they can,” Washington said. “Today, they gave out 500 meals, but it wasn’t enough to feed the whole town. By the time we made it there, they were out.”

Both Washington and Koch were recently able to borrow generators from family members to power their refrigerators and charge their cell phones. They're still eager to say goodbye to cold showers and flashlights after dark.

Duson Police Chief Kip Judice said the entire town has been dark for days, aside from a generator-powered light here or there. His police department has also been relying on backup generator power.

"We have electrical access because of a generator," Judice said. "But we can't do any reports or anything. We don't have internet access or wifi or anything."

Judice cited the outage in a Duson student being struck by a vehicle while boarding a bus early Wednesday morning.

"He just bumped the kid," Judice said. "But the driver thought the lights he saw were electrical workers and not a school bus. It distracted him, with his eyes straying from the road to look for a down power line or something."

While nobody likes to be without air-conditioning or lights, Judice says the outage has had an even bigger impact on his community than others in Lafayette Parish because his residents are less affluent.

"I think they're resilient," Judice said. "They seem to be getting by even though it's affected their ability to do everyday things. It's been tough on everybody, but there are little things that are tough to comprehend, to put into words."

Entergy and SLEMCO both provide power in Duson. Entergy spokesperson Brandon Scardigli said Duson he expected power to return to all homes that could accept power on Wednesday night or Thursday.

SLEMCO lost power to 108,000 of 110,000 customers during the storm, spokeswoman Mary Laurent said. She said SLEMCO serves about 40,000 customers in Lafayette Parish, and 9.8 percent remained without power Wednesday.

Lafayette, she said, is the most urban of SLEMCO’s customer bases. She said parishes in the direct path of the storm – Acadia and Vermilion – were proving more difficult to reconnect because they are more rural, involve vast amounts of power lines and customers who are more spread out.

She said Jefferson Davis Parish, badly hit by the storm, has “lots of little pockets” of customers that are being reconnected a few at a time. She said SLEMCO has about 700 workers, including the company’s own 140 personnel, to address problems along its 10,000 miles of lines.

“Per mile of line, our density is lot less than others,” she said.

She said outages on Wednesday included:

Laurent said SLEMCO hopes to have all customers who can accept power reconnected by the end of the weekend.