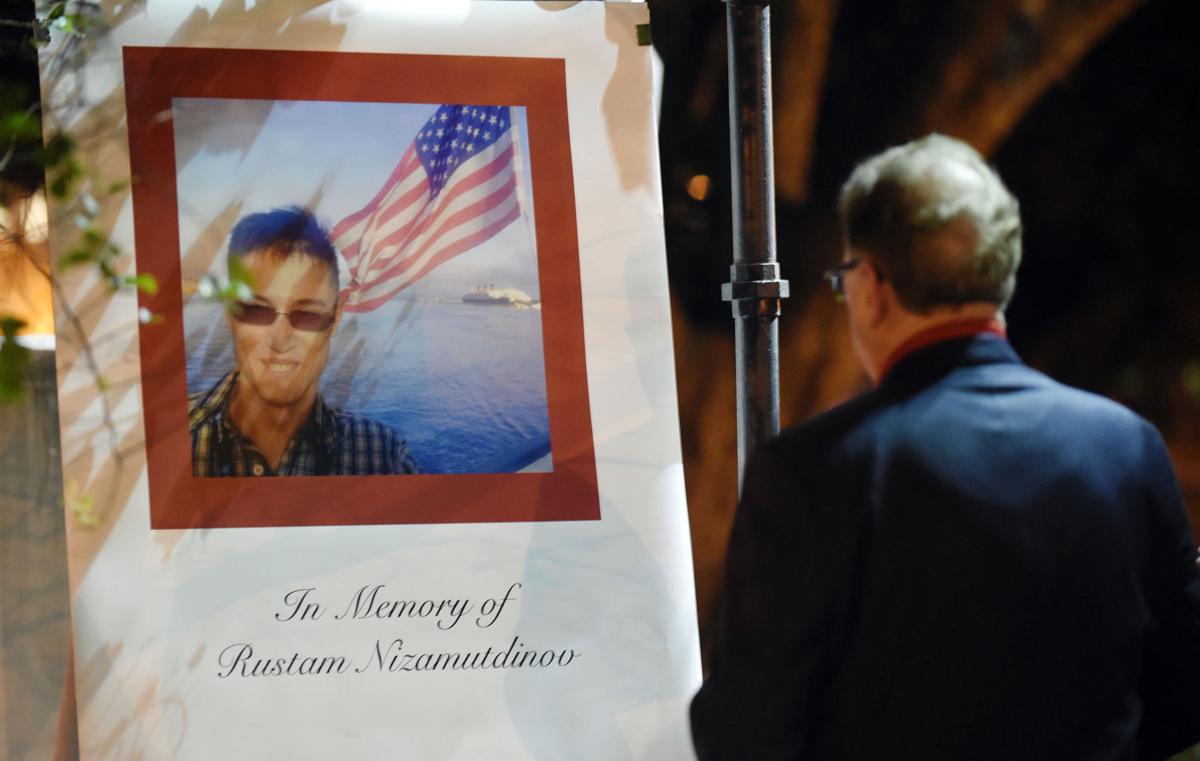 University of Louisiana at Lafayette President Joseph Savoie looks at a picture of Rustam Nizamutdinov, the UL-Lafayette student from Uzbekistan who was killed after being struck by a vehicle while walking in the 3800 block of Johnston Street. The memorial for the student was held Nov. 10, 2016, outside Madison Hall on the UL-Lafayette campus in Lafayette, La.

University of Louisiana at Lafayette President Joseph Savoie looks at a picture of Rustam Nizamutdinov, the UL-Lafayette student from Uzbekistan who was killed after being struck by a vehicle while walking in the 3800 block of Johnston Street. The memorial for the student was held Nov. 10, 2016, outside Madison Hall on the UL-Lafayette campus in Lafayette, La.

A Louisiana appellate judge Wednesday reversed a lower court ruling in a hazing lawsuit and ruled individual fraternity members could be held liable for damages, a decision that could have implications for fraternity members accused in similar hazing cases.

On Nov. 6, 2016, a University of Louisiana at Lafayette student who was subjected to forced sleep-deprivation and other fraternity hazing activities during homecoming weekend fell asleep at the wheel and killed another student, according to the lawsuit, which was filed in 2017.

Rustam Nizamutdinov, a student from Uzbekistan, was walking down Johnston Street when he was struck and killed by a vehicle driven by Michael Gallagher, a Kappa Sigma pledge. Nizamutdinov was an only child, obtaining his master’s degree in engineering at the university. He is survived by his mother, who lives in Uzbekistan.

The lawsuit claimed the fraternity and its members hazed pledges by depriving them of sleep for 72 hours, during which time they served as designated drivers for drunk fraternity members. That 72-hour period was the culmination of a week of hazing that included sleep-deprivation, required labor and required alcohol consumption, the lawsuit alleged.

The lawsuit, filed by the deceased’s mother, Farida Shavkatova Nizamutdinova, sought unspecified damages and named individual fraternity members. She claimed the four named defendants, all members of the Epsilon-Chi chapter’s executive board, were personally liable because they agreed “in writing, on multiple occasions, to refrain from, prevent and immediately report such conduct to Kappa Sig and ULL,” the appeals court opinion said.

Nizamutdinova argued that the men had a duty to prevent or stop the alleged hazing to prevent “perilous danger” and their failure to abide by the rules they swore to uphold “created an unreasonable and reasonably foreseeable risk of harm, damage and injury to the Epsilon-Chi pledges, third parties and the public,” that resulted in the death of her son.

In trial court, the fraternity members and officers claimed that they, as individuals, had essentially no duty to refrain from hazing pledges, and owed no duties of care to Nizamutdinova. The trial judge granted their motions to dismiss, leaving only the national fraternity as a defendant.

Chief Judge Ulysses Thibodeaux of the Louisiana Third Circuit Court of Appeal reversed the trial court decision, according to a prepared statement issued Thursday from the Fierberg National Law Group, who is representing Nizamutdinova.

The opinion details how fraternity members have duties to refrain from hazing, and duties to the firm's client. Thibodeaux wrote the facts presented in Nizamutdinova’s lawsuit, if true, are sufficient to make a claim the defendants had individual liability.

In the court opinion, Thibodeaux wrote that fraternity membership does not shield the men from individual responsibility.

The Fierberg National Law Group’s statement praised the decision, noting the case can now move forward after being stalled for years and they, “can achieve justice for Rustam’s mom.”

"This appellate decision is solid legal authority for preventing these types of legal antics by fraternity officers and brothers in the future, certainly in Louisiana and, likely, elsewhere,” the firm said.

The case will now return to the 15th Judicial District Court, which covers Acadia, Lafayette and Vermilion parishes.

The University of Louisiana at Lafayette suspended four fraternities in the weeks following the death of an LSU fraternity pledge, according t…