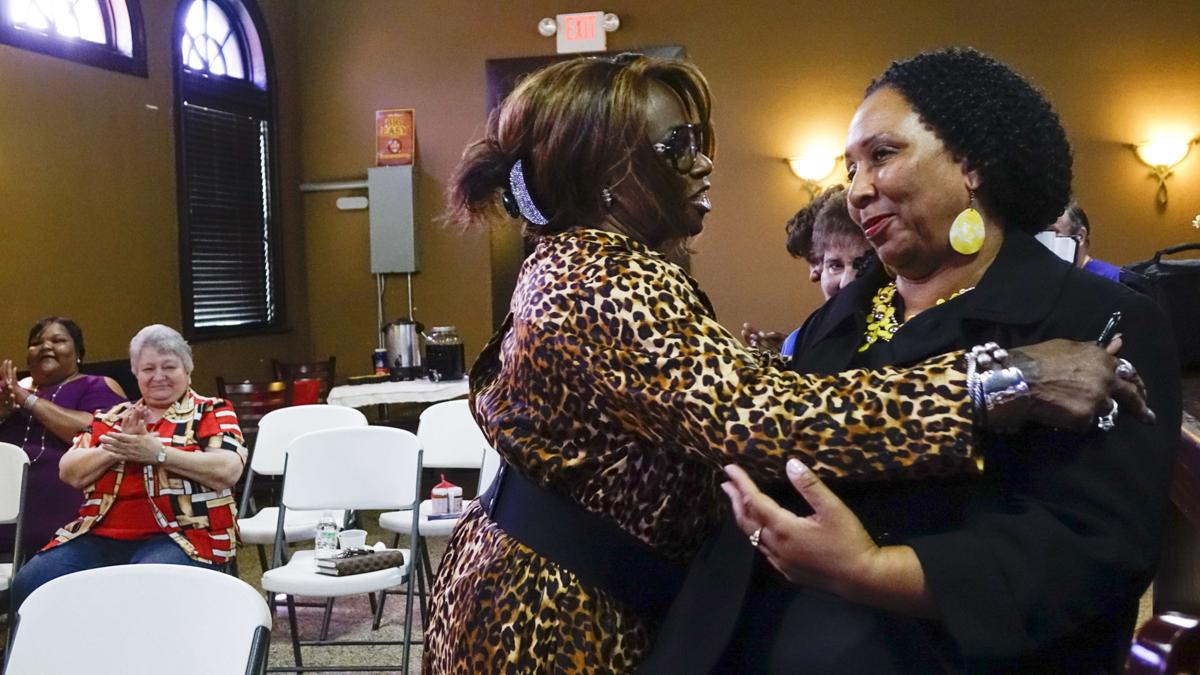 Sherry Johnson, right, is hugged by Audrey Duncan Hampton before speaking at the “Conference to End Child Marriage by 2020” in Mamou, Louisiana March 17, 2018. 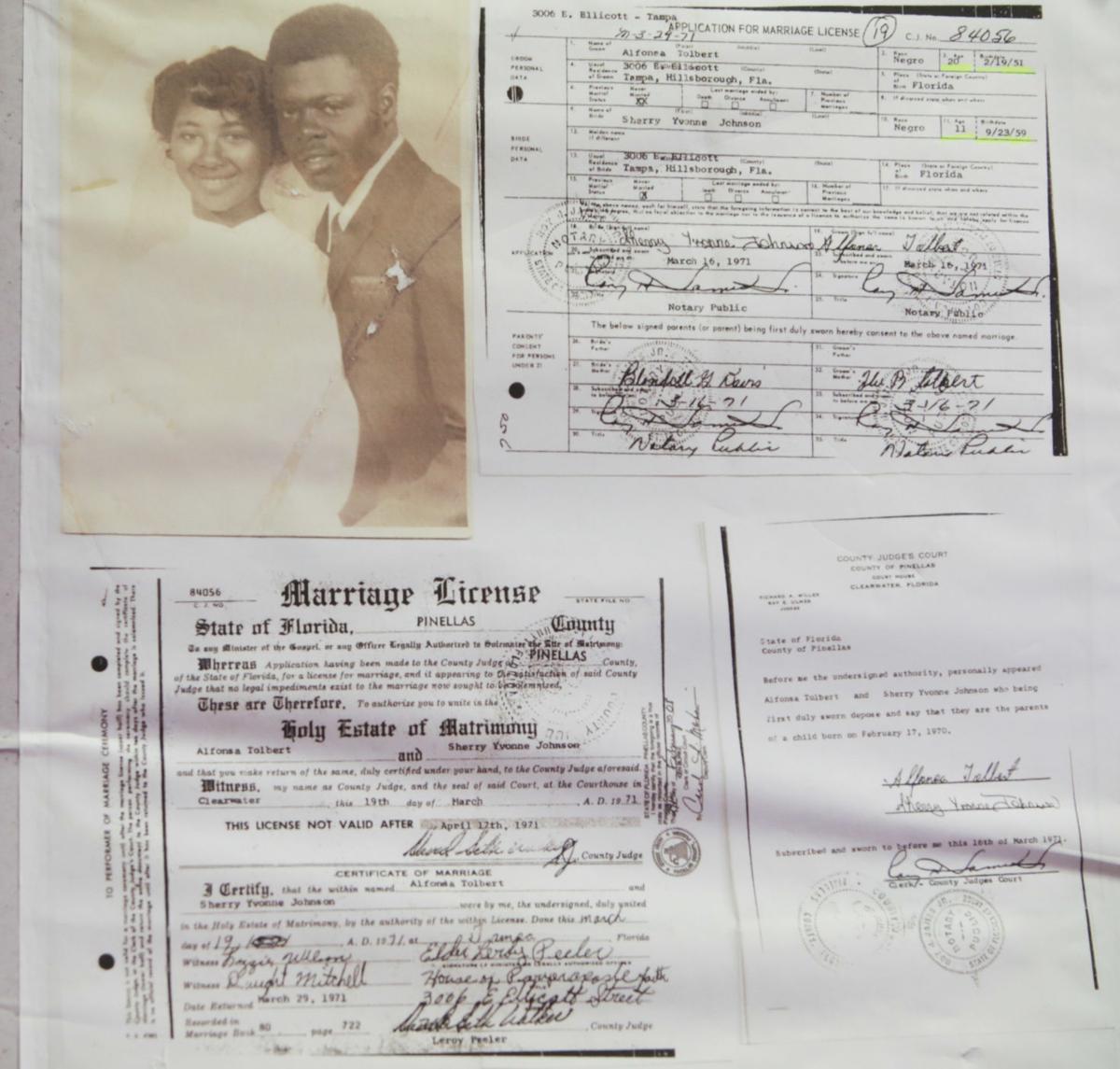 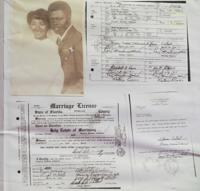 A wedding photo, marriage license and other documents of Sherry Johnson marriage at age 11 displayed during the “Conference to End Child Marriage by 2020” in Mamou, Louisiana March 17, 2018. 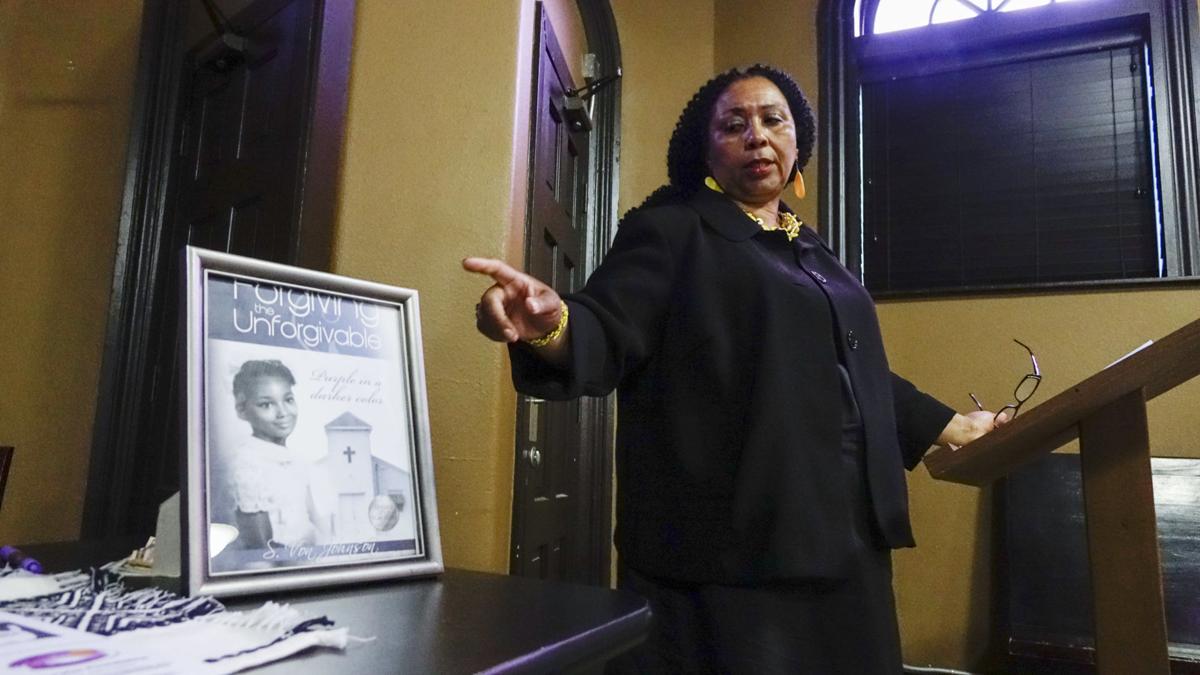 Sherry Johnson points to a a book about her childhood as she speaks during the “Conference to End Child Marriage by 2020” in Mamou, Louisiana March 17, 2018.

Sherry Johnson, right, is hugged by Audrey Duncan Hampton before speaking at the “Conference to End Child Marriage by 2020” in Mamou, Louisiana March 17, 2018.

A wedding photo, marriage license and other documents of Sherry Johnson marriage at age 11 displayed during the “Conference to End Child Marriage by 2020” in Mamou, Louisiana March 17, 2018.

Sherry Johnson points to a a book about her childhood as she speaks during the “Conference to End Child Marriage by 2020” in Mamou, Louisiana March 17, 2018.

MAMOU — A Florida woman who helped spark what has become a growing national movement to end child marriage in the United States brought her message to Louisiana this weekend.

Sherry Johnson was the highlight speaker at a two-day "Conference to End Child Marriage by 2020" at the Hotel Cazan in Mamou.

Those troubled by young girls marrying adult men gathered to tell their stories and voice their support for legislative action in Louisiana to make child marriage illegal.

“We’re tackling this aggressively because evil flourishes when good people do nothing, said Valerie Cahill, owner of the Hotel Cazan and one of the organizers of the conference.

"This is the start of a movement," she said. "We have a complete cross section of people supporting this. Republican and Democrat. Young and old. Men and women. We’ve all come together on this.”

Johnson, the speaker, was considered a driving force behind a law passed in Florida on March 9 that makes marriage to anyone under age 17 illegal.

Johnson, now 58, said had been raped by a church deacon at age 11 and was forced to marry him when it was discovered she was pregnant. She had six children with him in seven years. After her husband failed to provide child support and was jailed, she was able to get a divorce, she said.

“My mother said I had to accept it and couldn’t think about divorce,” Johnson said. “Legally, I couldn’t get a divorce because I was 17, but (my lawyer) did it anyway because he saw all that trauma and garbage in my life. I was in invisible handcuffs when I did nothing wrong. The person who did do wrong, who raped me and took my innocence, was free to continue hurting women.”

Other women from across Louisiana shared their stories as well during the first day of the conference, on Friday, which continued on Saturday.

Some talked about how even though their own marriages turned into long and successful ones, they realized now the abuse most young girls go through when married to adult men several years old than them.

Others shared the horrors they experienced personally or the stories of girls they had helped over the years.

Many of the women who came forward at the conference as having been child brides were wed decades ago, but the problem is still very real in modern America.

There is no minimum age in Louisiana to get married. If the child’s parents approve of the marriage and can get a juvenile court judge to signs off on it, a child of any age can be married.

According to Unchained at Last, an organization formed with the goal of abolishing child marriages in the U.S., at least 207,268 minors under the age of 18 were married in the United States between 2000 and 2015.

In Louisiana alone,more than 4,300 minors were married from 2000 to 2010 and over 80 percent of those were young girls to adult men. Judges even allowed for girls as young as 12 years old to marry during this ten-year period.

Although the majority of child marriage victims are girls and the perpetrators male, a September 14 investigation by the PBS television program Frontline discovered a case in Tennessee in which an 11-year-old boy had been married to a 27-year-old woman.

Amanda Parker, senior director of the AHA Foundation, which is also dedicated to ending child marriage, said Louisianans who  are working to protect their children from sex trafficking need to be aware of the role that allowing children to marry plays in facilitating this human rights abuse.

"Laws that allow child marriage in Louisiana are a tool for traffickers to target vulnerable children in the state,” said Parker, who added that she is heartened by the recent swell of support among states to outlaw child marriages through laws such as the one passed in Florida.

Louisiana should end the practice as well, she said.

While concerned citizens gathered in Mamou, legislation is being drafted in Baton Rouge to end child marriage in Louisiana.

State Rep. Karen Carter Peterson, D-New Orleans, has said she is drafting a bill to plug loopholes in Louisiana’s law and will end child marriage. Cahill said Peterson will be introducing it soon.

Cahill said those trying to end child marriages in Louisiana through legislation would start campaigns to remove from office those politicians who fight them.

“If you call yourself a public servant and can’t understand why we can’t marry off our children to pedophiles, we need to get them out," Cahill said. "This is the lowest threshold of calling evil what it is. If you can’t get behind us on this, then you’re morally wrong.”

Should 18 be the minimum age to wed? State legislators to battle over Louisiana marriage laws

How young is too young to get married?