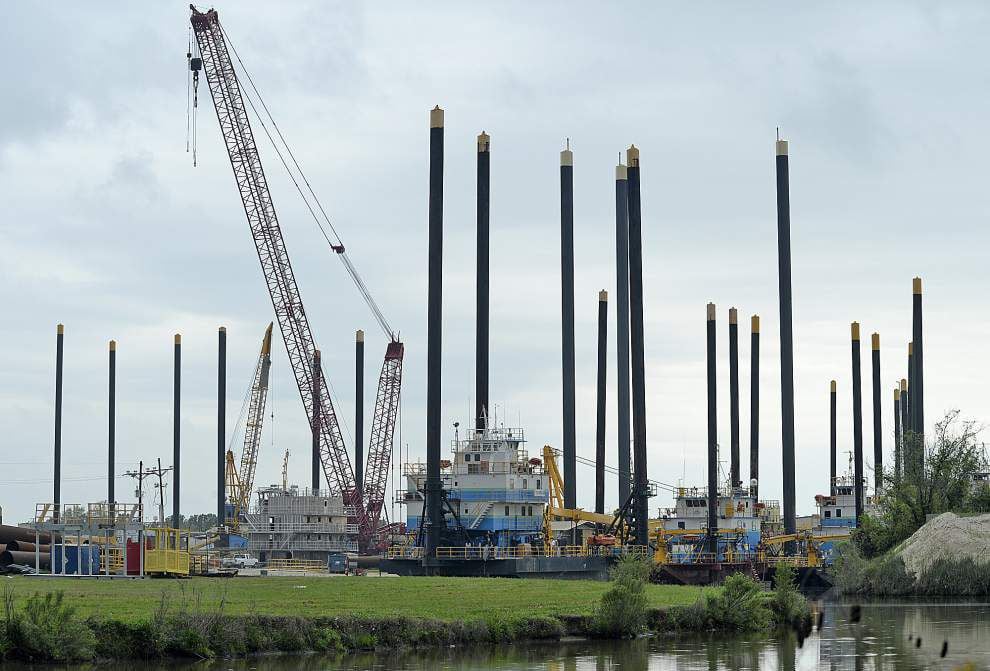 Advocate staff photo by BRYAN TUCK -- Unused lift boats are stacked together at the Port of Ibieria Thursday. 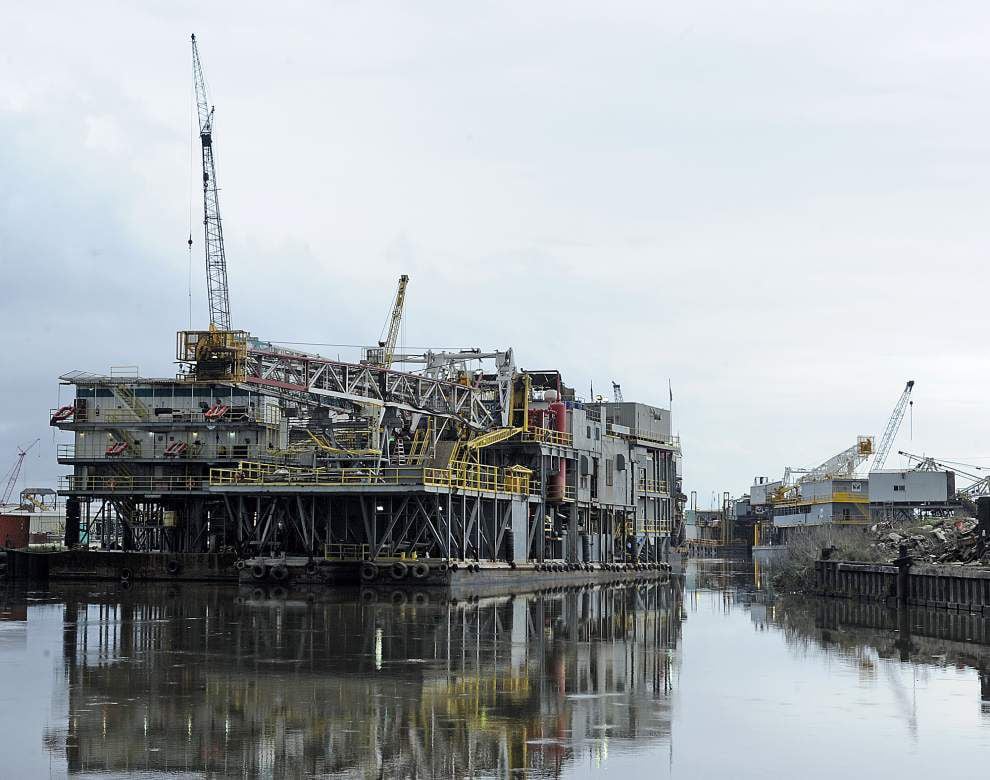 Advocate staff photo by BRYAN TUCK -- Unused inland drilling rigs are stacked together at the Port of Ibieria Thursday. 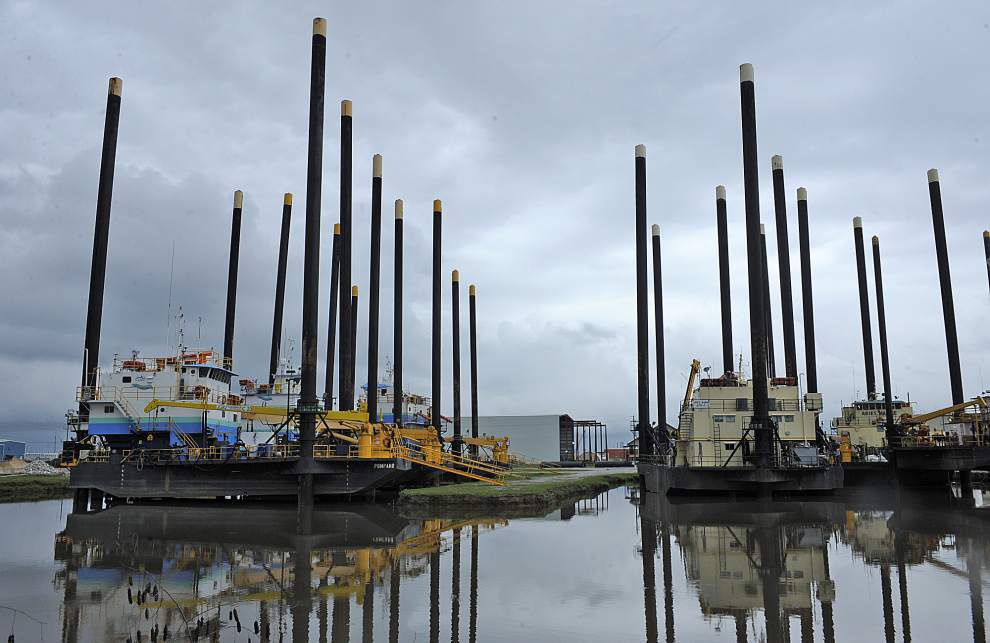 Advocate staff photo by BRYAN TUCK -- Unused lift boats are stacked together last month at the Port of Iberia. Plunging oil prices claimed 4,400 oil and gas industry jobs over the past 12 months, but Louisiana still posted an overall gain of 14,600 nonfarm jobs. 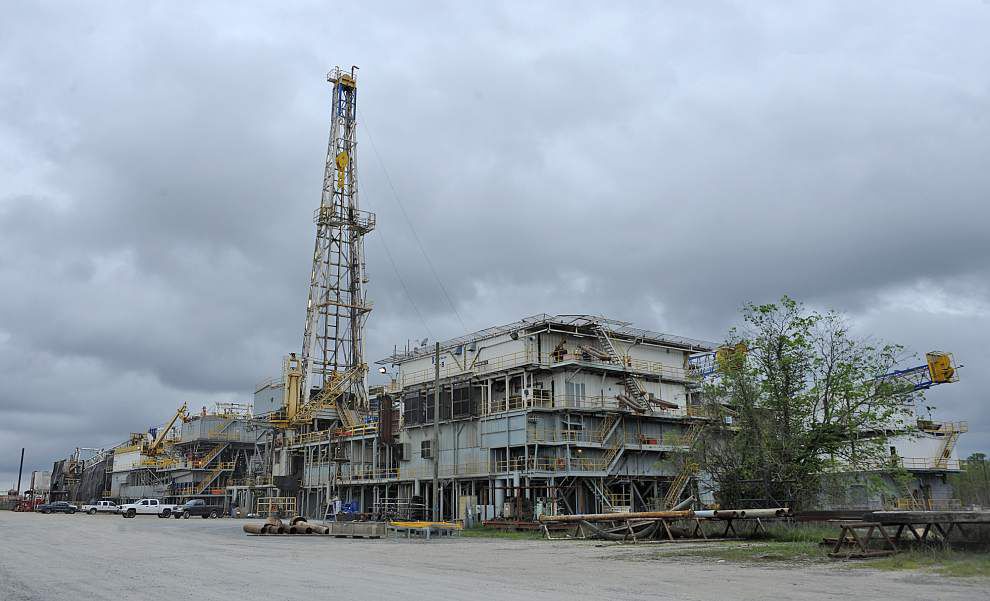 Unused inland drilling rigs are stacked together at the Port of Iberia. Low crude prices have contributed to a loss of oil and gas jobs in Louisiana, particularly in the Lafayette and Houma-Thibodaux metro areas.

Advocate staff photo by BRYAN TUCK -- Unused lift boats are stacked together at the Port of Ibieria Thursday.

Advocate staff photo by BRYAN TUCK -- Unused inland drilling rigs are stacked together at the Port of Ibieria Thursday.

Advocate staff photo by BRYAN TUCK -- Unused lift boats are stacked together last month at the Port of Iberia. Plunging oil prices claimed 4,400 oil and gas industry jobs over the past 12 months, but Louisiana still posted an overall gain of 14,600 nonfarm jobs.

Unused inland drilling rigs are stacked together at the Port of Iberia. Low crude prices have contributed to a loss of oil and gas jobs in Louisiana, particularly in the Lafayette and Houma-Thibodaux metro areas.

Tucked away in a slip at the far east side of the Port of Iberia, a dozen Parker Drilling inland barges are lashed together, three wide and four deep.

The Parker rigs won’t be drilling for oil or gas again anytime soon.

“They laid off close to 300 — mostly floor hands, roustabouts, roughnecks, people who do the actual work,” said Craig Romero, a former state senator and oilfield salesman who now is executive director at the port.

Romero and others in the industry, which is reeling from an oil price that’s been cut in half since June, say the impact has been greatest on businesses that aren’t in the deepwater energy sector.

Shale drillers, inland water drillers and those in the shallower waters of the Gulf of Mexico are being hit the hardest. Also hit hard are the service companies that help them drill, produce and take the oil to market.

Activity in the Gulf’s deepwater, at least for now, has not abated. It takes years to find oil in thousands of feet of water, drill for it, fabricate and then install the topsides and subsea production structures.

Romero said the Port of Iberia provides a study in two economies. Riser fabrication and other deepwater component manufacturing and maintenance are booming in yards that sit close to the dead-slow shallow-water service companies like Parker Drilling.

“If you’re connected to deepwater, you’re busy as heck,” Romero said. “It just depends on who your customer base is.”

Parker Drilling told the Louisiana Workforce Commission in early 2015 that it would lay off 50 to 297 employees by March. In a February filing to the Securities and Exchange Commission, Gary Rich, the company’s president and chief executive officer, painted a gloomy picture for 2015.

“The steep and rapid decline in oil prices has led to a sharp reduction in drilling activity in U.S. land and Gulf of Mexico inland and shallow-water markets,” Rich wrote. “This also is putting increased pressure on prices for our services. We anticipate the downturn in our U.S. markets will be severe and expect our international markets to be impacted as well, though with less severity.”

The effects of low-priced oil — currently priced in the mid-$40s to low $50s, down from the $106 a barrel it fetched in June of last year — are starting to show throughout Louisiana.

Service companies have laid off hundreds of workers, and others are about to do so; Gulf of Mexico vessels and drilling rigs are being stacked; and local governments dependent on the sales taxes supported by energy jobs look nervously at each month’s receipts.

“My own guess is this will go on for a couple of years,” said Eric Smith, associate director of the Tulane Energy Institute, a division of the Freeman School of Business at the New Orleans campus. Producers in the Gulf’s shallow waters have reserves that are heavy on natural gas, the price for which has been in the tank for years, he said. And now what little oil they produce is not bringing in much income.

“Shallow water in the Gulf of Mexico is in deep trouble,” he said.

Smith has given presentations to various groups this month about the direction of the oil and gas industry. In a sign of the times, one of his presentations was to the Turnaround Management Association, a group of bankruptcy specialists from Chicago.

Meanwhile, the Louisiana Workforce Commission, which tracks job losses and helps the unemployed find work, said unemployment claims have been climbing since Jan. 1.

Economic specialists at the parish level are watching, too.

“Equipment is coming in (from the Gulf) and not going out,” said Frank Fink, director of economic development for St. Mary Parish, a coastal parish that is heavily reliant on oil and gas dollars. “If prices stay where they are, we’re going to see substantial cutbacks.”

Fink and others last week were hesitant to predict Louisiana is headed into another era like the one that the state’s oil patch refers to simply as “the ’80s” — when the price of oil collapsed. According to the Energy Information Agency, the price of oil at the end of 1985 was $30. By March 1986, a barrel of oil cost about $10.

Fink said some St. Mary Parish businesses are not dependent on the oil industry, such as shipbuilder SwiftShips LLC, a Morgan City company that designs and constructs ships for the U.S. military. But he said some service-company capital projects have been put on hold, including the $34 million OneSubsea expansion in the parish by a joint venture of two oilfield giants, Cameron and Schlumberger.

“Right now, we’re not looking at this year being a very robust year,” Fink said.

“I don’t think the oil field was prepared for the drop we had in the ’80s,” said Elfert, the chief financial officer for Terrebonne Parish. She has worked in the parish’s Finance Department since 1974.

She said the industry learned lessons 30 years ago. “I just find that people are a lot more prudent these days,” she said.

Elfert and officials in other parishes are keeping a close watch on sales tax receipts, an indication of economic activity. She said the first two months of 2015 have produced receipts on a par with January and February 2014 in Terrebonne.

Henry “Bo” LaGrange, chief administrative officer for St. Mary Parish government, said the current sales tax collections are at 2011 levels. He said the fall-off in the last months was really a reflection of how good 2013 and 2014 were — the best years ever seen in St. Mary Parish, LaGrange said.

Smith, with the Tulane Energy Institute, said the drop in oil’s price in 1986 came after Saudi Arabia was unsuccessful in urging other members of OPEC to cut their oil production to maintain a healthier price. When the other countries didn’t follow suit, the Saudis “turned on the taps,” Smith said, flooding the market and collapsing the price.

The current low-cost environment was fueled by U.S. success in new drilling and completion techniques that unlocked oil and gas trapped in shale rock. Since 2008, U.S. oil production has increased by more than 70 percent, adding millions more barrels a day to the world market and producing a glut that brought prices down.

Smith said the per-barrel price is unlikely to rise anytime soon. Shale producers have drilled 3,000 wells that have not been hydraulically fractured due to low prices, he said. The wells are sitting there drilled but not completed. Those wells can be brought to production fairly quickly if the price rises, which would quickly deflate the price again, he said.

The market winner in oil is the low-cost operator, and “the Saudis are the low-cost guy on the block” because of their ability to produce oil at about $5 a barrel, Smith said.

According to employment numbers released Friday by the Louisiana Workforce Commission, 3,300 workers who fall under the “mining and logging” classification, which includes oil and gas workers, filed for unemployment benefits in the state from February 2014 to February 2015.

LWC Director Curt Eysink said the bulk of the 3,300 workers filed their claims after Jan. 1. He said some of the workers who received notification from their company about a layoff found other work quickly.

“The number of claims we’re getting out of the mining and logging sector, that increase hasn’t shown up in a broad way across our (Louisiana) economy,” Eysink said.

Some companies have issued notices to LWC of their intention to lay off workers. Hercules Offshore, which drills oil and gas wells in the Gulf’s shallow waters and other parts of the world, informed LWC that it would lay off up to 450 employees before the end of the year. According to Hercules’ website, half of its drilling fleet — 18 of its 35 rigs — is out of service.

In February, Baker Hughes, which last year agreed to be bought by competitor Halliburton, said it was laying off 60 workers at an office in Houma. And in St. Mary Parish, industry officials expect Oceaneering to announce hundreds of layoffs.

Angela Cring heads up the Louisiana Gulf Coast Oil Exposition, a decades-old Lafayette-based oil and gas advocacy nonprofit known as LAGCOE. Among its accomplishments is a Young Professionals of LAGCOE group, started to recruit and hold millennials in energy jobs.

Cring said oil and gas companies that hurriedly shed the young workers they desperately sought just a year ago risk losing the industry’s next generation.

That’s what happened in the 1980s, she said. Workers left and didn’t return. They included engineers and accountants on the executive track who left to find careers elsewhere; drilling floor hands who would one day have become drillers; and budding boat captains who left to find other work such as driving long-distance trucks.

“Companies have to do what they have to do to weather the ups and downs of the industry — in the present case, the downs — but over the long haul, (younger workers) are going to be a critical piece,” Cring said. “I think it’s in everybody’s interest if decision-makers are keeping in the forefront of their minds the fact that this new generation of industry leadership that’s been coming up over the last few years should not be forgotten.”