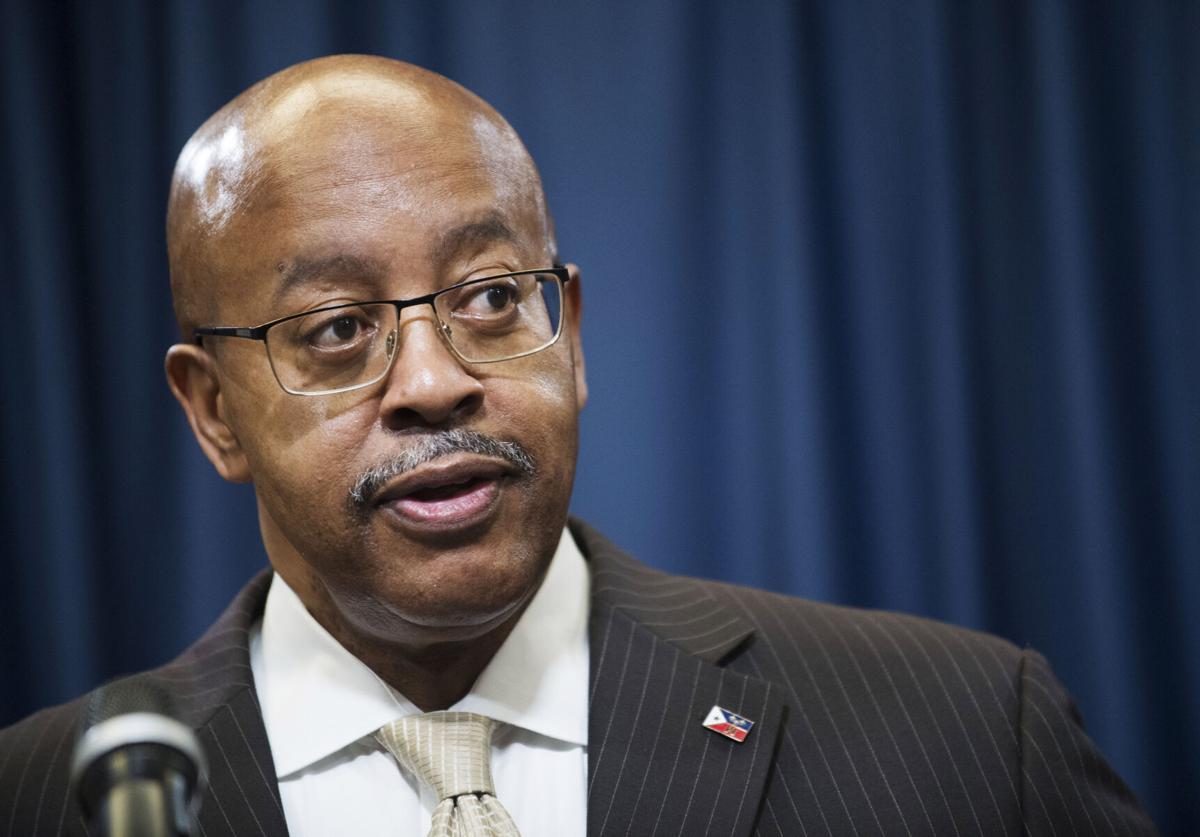 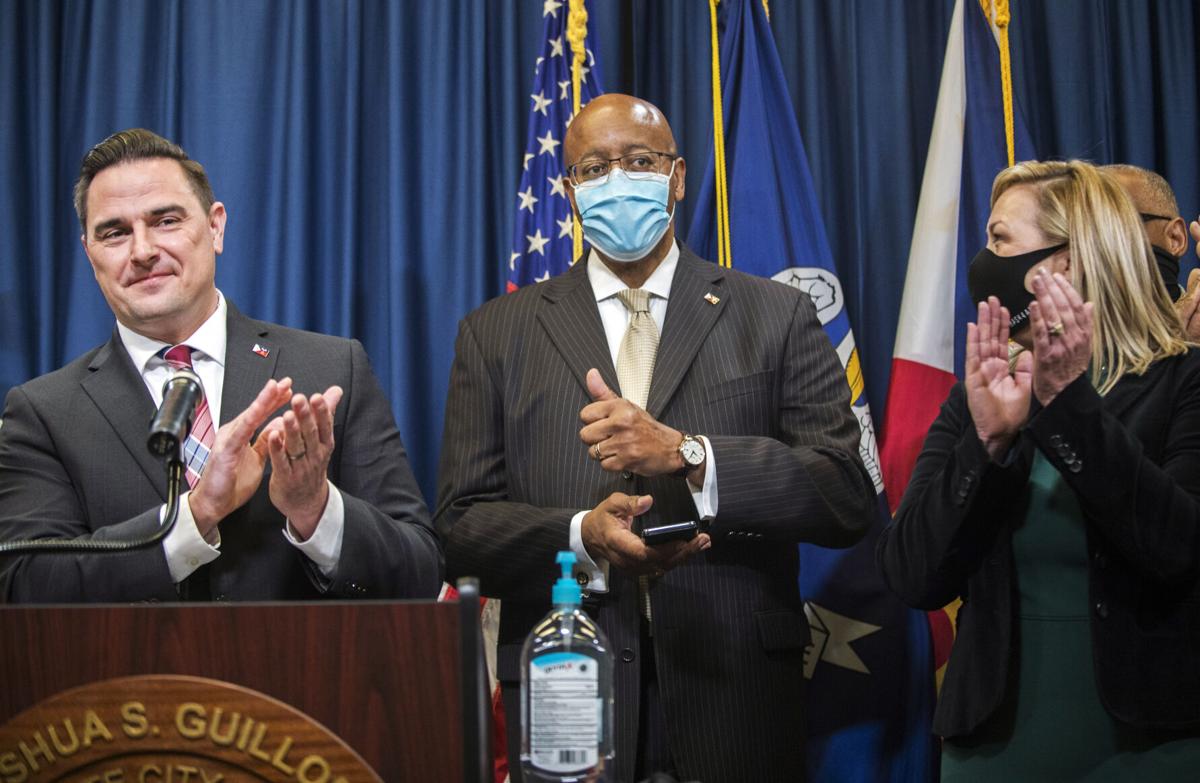 Thomas Glover Sr. gives a thumbs up as he is introduced as the new Lafayette police chief and applauded by Lafayette Mayor-President Josh Guillory and Chief Administrative Officer Cydra Wingerter during a press conference Wednesday, December 23, 2020, at city hall in Lafayette, La. 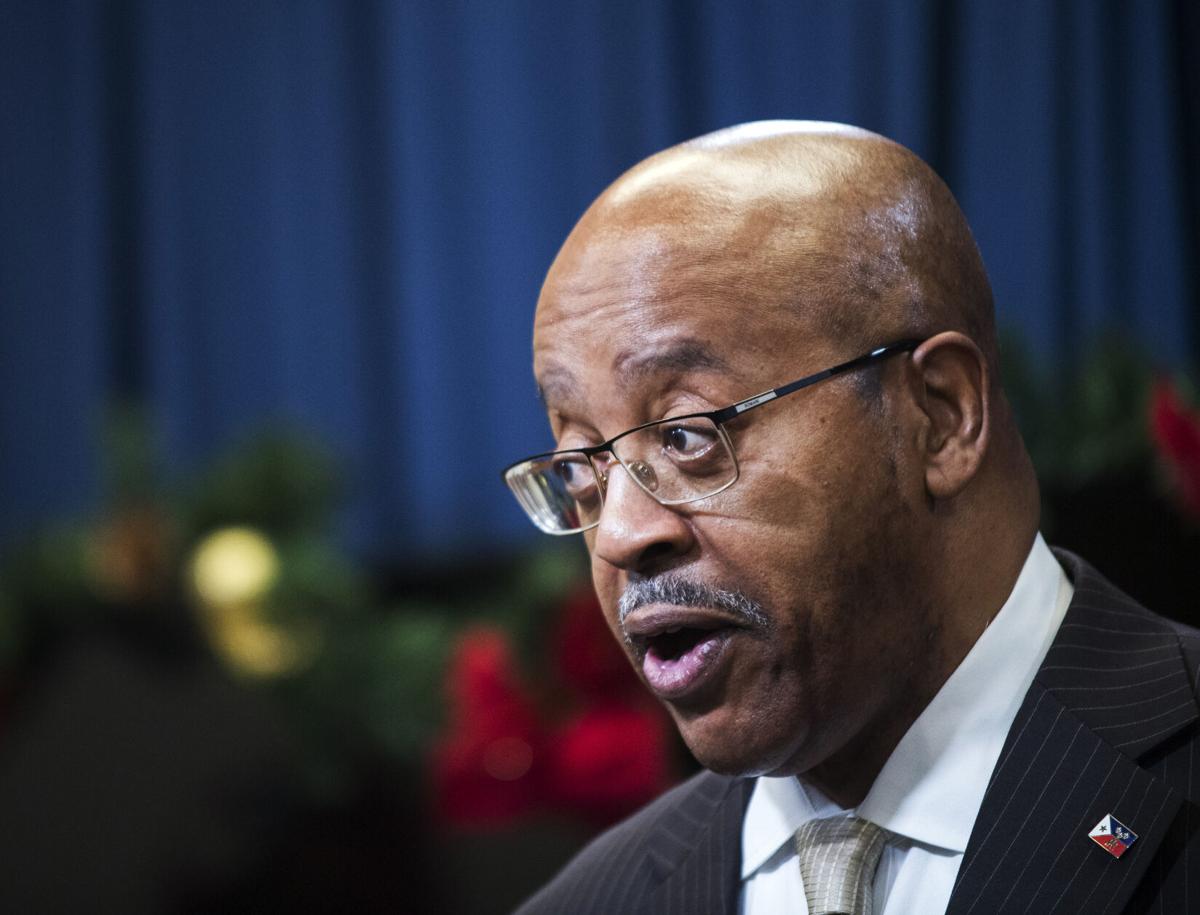 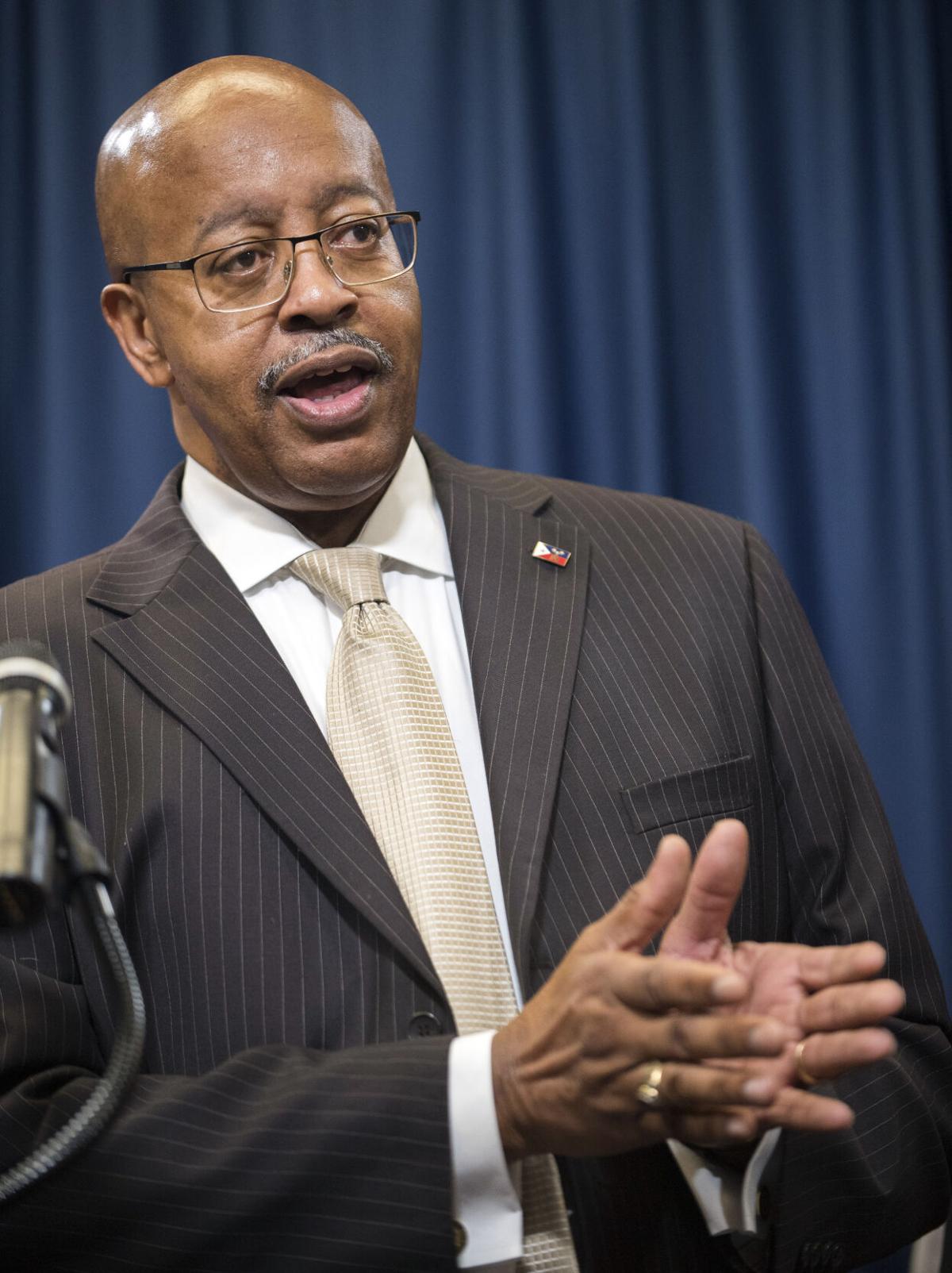 Thomas Glover Sr. gives a thumbs up as he is introduced as the new Lafayette police chief and applauded by Lafayette Mayor-President Josh Guillory and Chief Administrative Officer Cydra Wingerter during a press conference Wednesday, December 23, 2020, at city hall in Lafayette, La.

“I definitely want to thank the citizens of the city of Lafayette and the members of the police department. It is a tremendous honor to be here. I have almost 40 years of experience in policing....I still love it; it’s a very noble profession. Here and there we have some kinks we have to iron out, but I think in the end we’re going to do a great job,” Glover said.

He’ll take over as chief Dec. 31 at noon, Guillory said. Interim Chief Scott Morgan has led the department since Chief Toby Aguillard resigned in January with a $70,000 settlement after pressure from Guillory to retire or be fired.

Guillory thanked the two internal finalists, calling them “gentlemen of class.” He said Glover stood out to him after prayerful reflection because of his integrity and willingness to hold everyone accountable, beginning with himself.

“I hope everyone can see that we have before us a man of integrity. We have before us a man that appreciates accountability and a man that I find to be a leader who leads in the front, which is what we need. I find our new chief of police would not issue an order or give guidance to anyone before recognizing that he himself would do that same task and follow that same order,” Guillory said.

“I’m very much looking forward to working with him and his team, and I believe that he can make LPD the best that it can be,” the mayor-president said.

Glover said his top objectives assuming leadership in Lafayette are to ensure safety and reduce crime, noting categories like burglary and property crime that can benefit from prevention education efforts; build trust with stakeholders through community policing efforts; boost staff retention and recruitment; and increase transparency.

The newly appointed chief addressed recent turmoil in policing, both nationally and locally, head on during an introductory press conference.

He said the world changed after the murder of George Floyd at the hands of Minneapolis police officers in May, calling it “one of the most devastating events that policing has seen in 200-plus years.” Ensuring community trust, treating everyone in the community with dignity and acting in a measured, appropriate manner has to be a priority, he said.

He said the department will follow the tenants of 21st Century Policing, a report produced by a task force under President Barack Obama aimed at establishing best policing practices while prioritizing community trust. Adoption of the task force tenants has been an oft-repeated demand of the Lafayette NAACP and community activists in recent months.

“We cannot police today the way we did a year ago. It has been a tremendous change and if you don’t get with the change then something drastic is going to happen to your city and to your department,” Glover said. 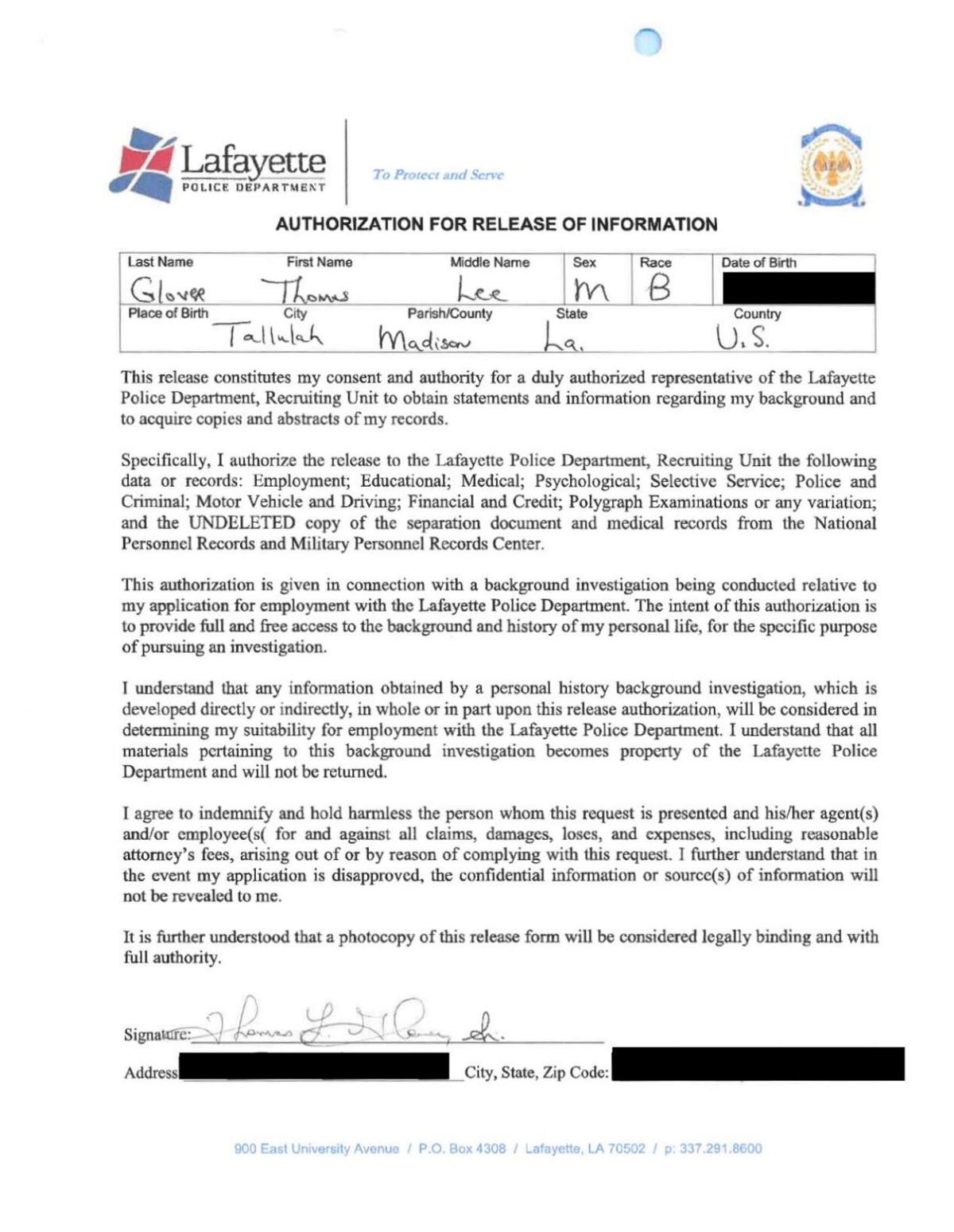 The new chief promised to be visible in the community and visit churches, schools, businesses and community events regularly to build connections and receive feedback, and said he’ll expect the same of his officers. Glover said he also has a history of coordinating and liaising with social justice activists and groups.

Glover said he’ll be initiating a top-down review of the Lafayette Police Department upon assuming office to assess changes. He’ll look at everything, including department policies and accountability in leadership. Some he’ll “stroke with a feather” while others “will take a wrecking ball,” he said.

Glover acknowledged he’ll be viewed as an outsider shaking things up, but assured his fellow officers he has “no personal agenda...no second or subversive agenda” other than investing in the department to make it better.

“I am going to identify, isolate and eliminate anything that’s a problem within this department, whether it’s a person, it’s a practice, whether it’s a process. It doesn’t mean I’m coming in with a vendetta, it means I’m coming in to do the job I was hired for and that’s to be the best chief of police for the city and for the citizens, for the taxpayers and to make sure we’re moving forward in the 21st century,” Glover said.

Glover, who is Black, inherits recent turmoil between the department and residents after the August death of 31-year-old Trayford Pellerin, a Black man who was shot and killed by Lafayette officers. Investigators said he was carrying a knife when he was shot at a Shell station on NW Frontage Road near the Evangeline Thruway.

The new chief said he drove the route Pellerin and the officers walked the night of his death after arriving in town for his interview last week. He’s also read about the incident independently and reviewed bystander video of the fatal shooting.

Glover said he’s not going to “pre-judge” the situation and will have significant briefings on the case. The chief appointee, who said he lost a son eight years ago from natural causes, said he’ll treat Pellerin’s family with empathy and listen to all perspectives while ascertaining the facts.

A week before Christmas, Lafayette woman's family hears her final moments as car strikes her

Shelby Wills, 28, had recently made changes in her life that her family felt hopeful about.

He said Pellerin’s death is a tragic, no-win situation for all involved and acknowledged tough decisions will need to be made that will not leave everyone satisfied.

“I’m going to get into a position where people can trust me to make the best decisions,” he said.

While addressing Pellerin’s killing, Glover noted he supports investment in less-than-lethal weapons and will work with the mayor to review existing resources and evaluate budget options to expand the department’s inventory of tools to apprehend and subdue suspects, such as propelled nets or other equipment.

Despite talk of department reviews and recent turmoil, Guillory said he does not view the department as troubled.

Glover said he’s confident in the professionalism and integrity of Lafayette’s police officers and believes their morals will align.

He said while he’ll challenge the officers to uphold the highest standards and work to put the department in the most efficient and successful posture, he’s a policeman to his core and wants officers to know he’ll encourage and support their physical and mental health and development within the department.

“This is a great department, otherwise I wouldn’t have applied. I sought this department out….My message to the officers is, 'I’m one of you.' Once I get my uniform and badge...I will show up on traffic stops and cover them, I’ll show up on a field call and cover them. I’m going to let them know I’m one of them,” he said.

The year 2020 was bound to be different for Lafayette. For the first time since consolidation in 1996, separate city and parish councils were …