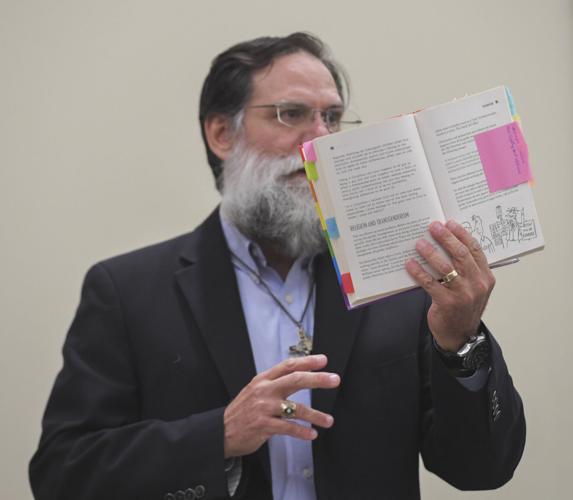 Board President Robert Judge holds "This Book is Gay" while speaking for its removal from Lafayette Parish public libraries during the Library Board of Control meeting on Monday, November 15, 2021 in Lafayette, La. 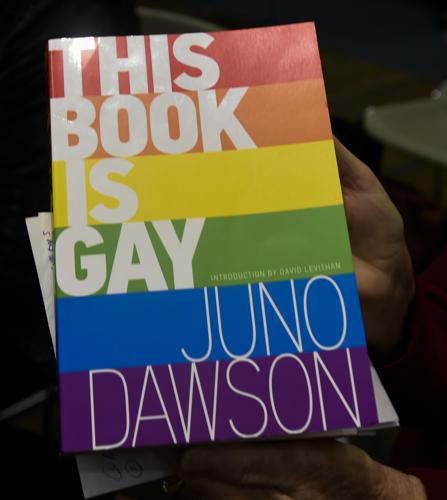 Two Lafayette Parish Library Board members wanted to ban the book, "This Book is Gay," about growing up LGBTQ at a meeting on Monday, Nov. 15, 2021, in Lafayette, La.

The Lafayette Public Library board of control may be violating the Louisiana Open Meetings Law when a committee meets in private to consider banning books.

Three Louisiana attorneys who specialize in the state's Open Meetings and Public Records laws agree that it is illegal for a committee of a public body such as the board of control to meet in secret to make decisions.

Under the library's Collection Development Policy approved by the board of control in August 2019, a patron may fill out and submit a form to request a book or other materials be removed from the library. The request then goes to a committee which, until Monday, consisted of two librarians appointed by the library director, and a board member.

On Monday, the library board voted to change the makeup of the committee to two board members and a single librarian.

What did not change is that the committee meets in secret to consider whether or not to ban the book in question.

If the person objecting to the book is satisfied with the committee's decision, the matter ends there. So if the committee agrees to ban the book, the book is removed from the library system without public notice or the chance for others to comment.

Under the Louisiana Open Meetings Law, Sternberg said, if a committee such as the library board appoints a subcommittee to review an issue, the subcommittee also is subject to the open meetings law just like the committee.

"Any committee, working group, whatever they want to call themselves, constituted by the public body is a public body and is subject to open meetings laws," McGoffin said.

Both McGoffin and Sternberg said the library's Reconsideration Committee must provide at least 24-hour notice prior to meeting, along with an agenda, or it is in violation of the state Open Meetings Law.

"Public body" means village, town, and city governing authorities; parish governing authorities; school boards and boards of levee and port commissioners; boards of publicly operated utilities; planning, zoning, and airport commissions; and any other state, parish, municipal, or special district boards, commissions, or authorities, and those of any political subdivision thereof, where such body possesses policy making, advisory, or administrative functions, including any committee or subcommittee of any of these bodies enumerated in this paragraph.

"Thus the committee is a public body and must comply with the Open Meetings Law, including notice of meetings and having all voting occur in public," Mince wrote in an email. "A secret vote at a closed meeting is voidable, meaning it can be voided by a court if promptly challenged in a court proceeding."

The Reconsideration Committee met at least twice recently behind closed doors without providing notice or an agenda.

"Any decision they made is subject to challenge and is invalid," McGoffin said.

There is a 60-day window from the date of the meeting, he said, to challenge the committee's decision.

Michael Lunsford, a St. Martin Parish resident who is employed as executive director of the conservative group Citizens for a New Louisiana based in Lafayette, filed a complaint in October to have "This Book is Gay" removed from the library system.

Lunsford later asked that the book "The V Word" be banned. In both cases, a committee of two library employees and a board member reviewed the requests and voted 2-1 not to ban the books. Lunsford appealed to the full board to ban "This Book is Gay," which the board declined to do. He did not appeal the committee's decision to keep "The V Word" on library shelves.

Both books are on a hit list being circulated nationally by conservative groups seeking to ban materials from schools and public libraries.

A complaint is pending with the Lafayette public library system to have a DVD of the movie "Scotty and the Secret History of Hollywood" banned.