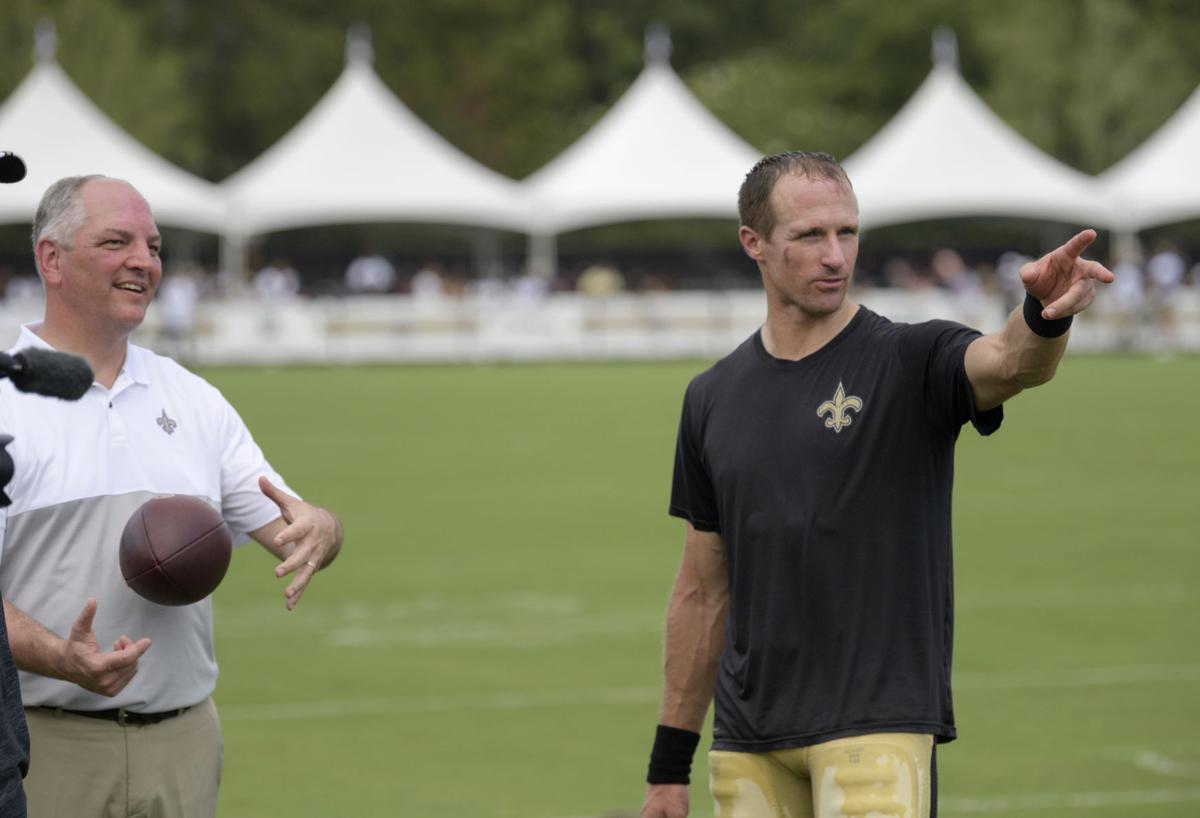 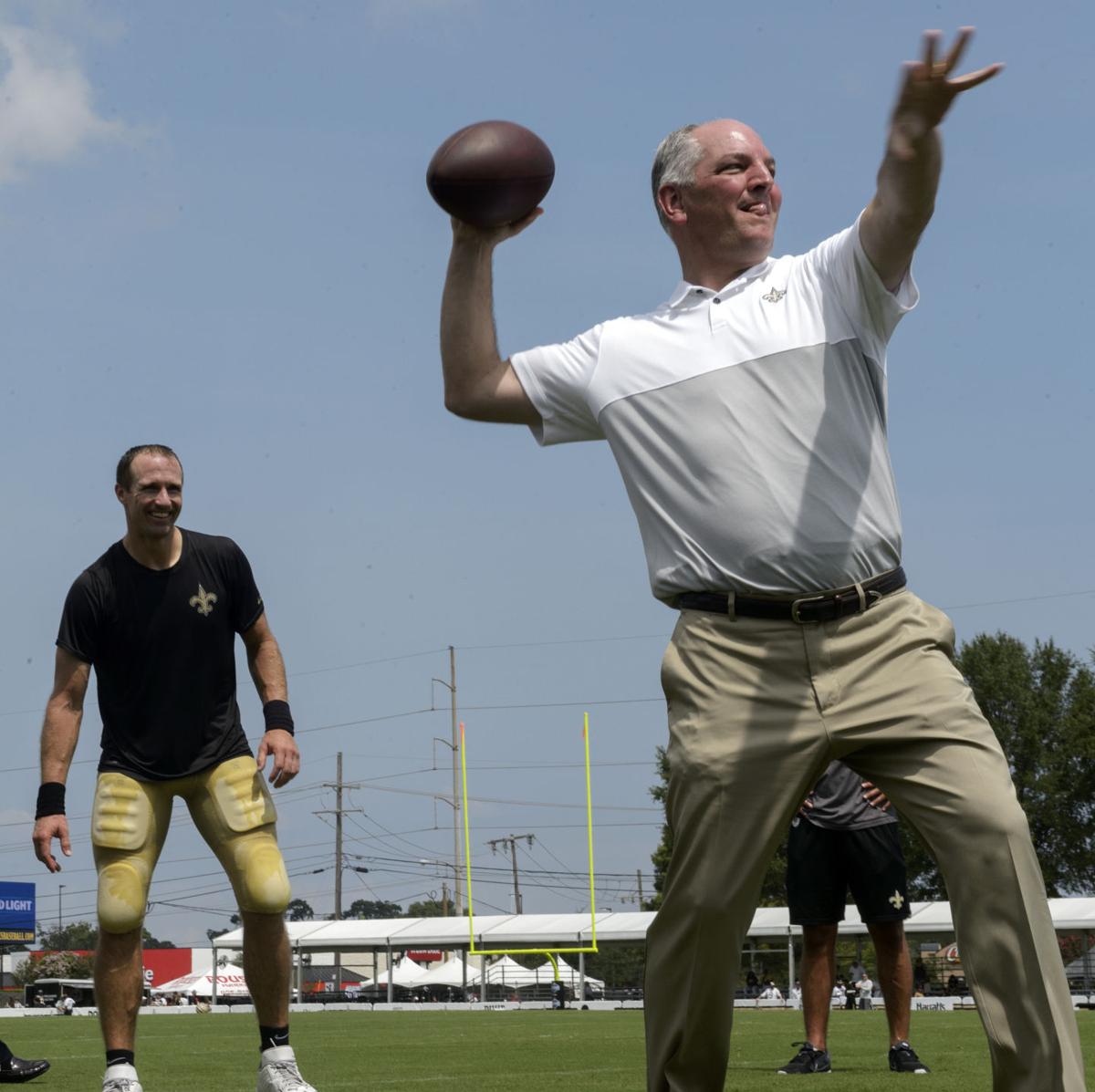 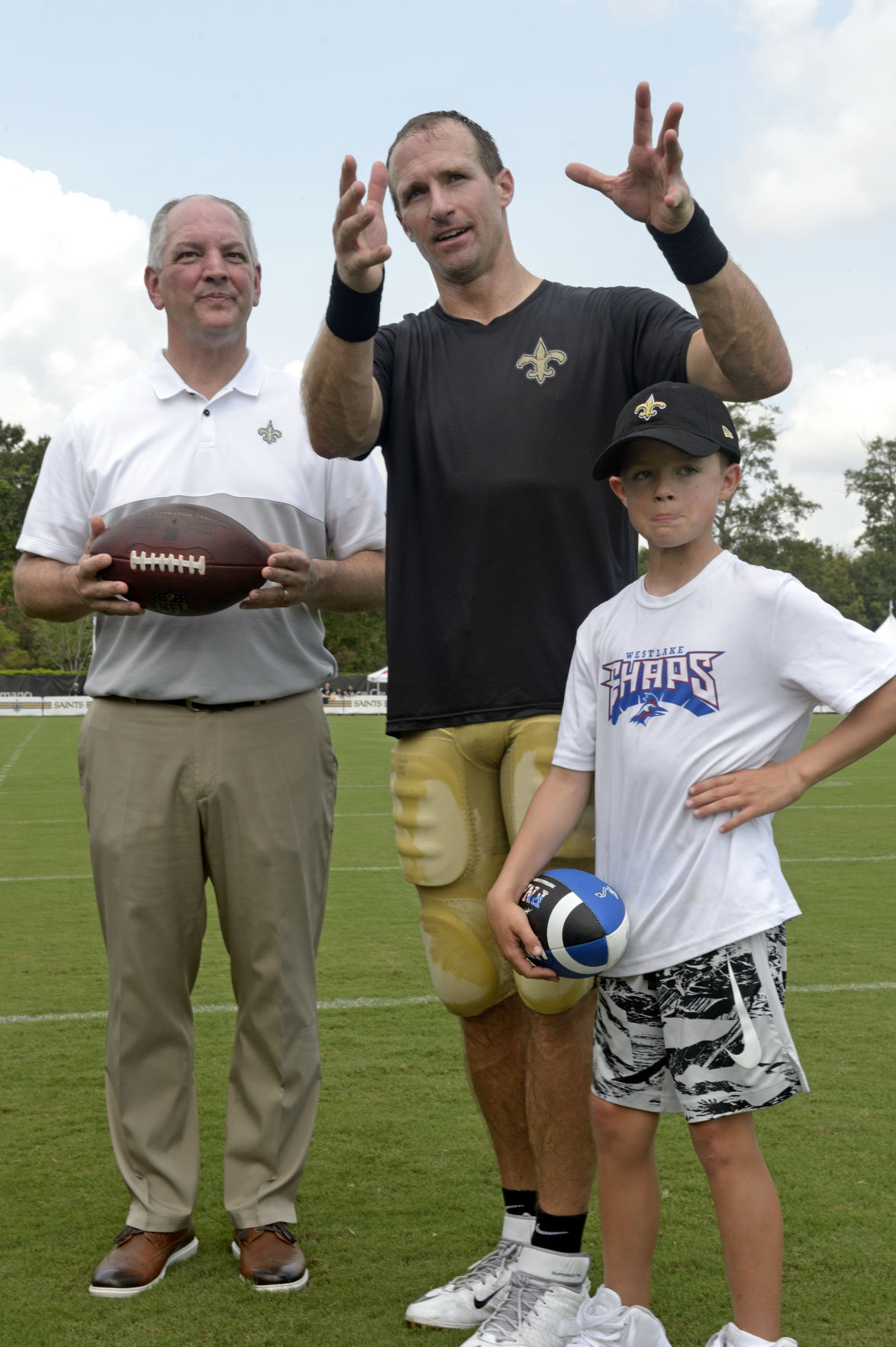 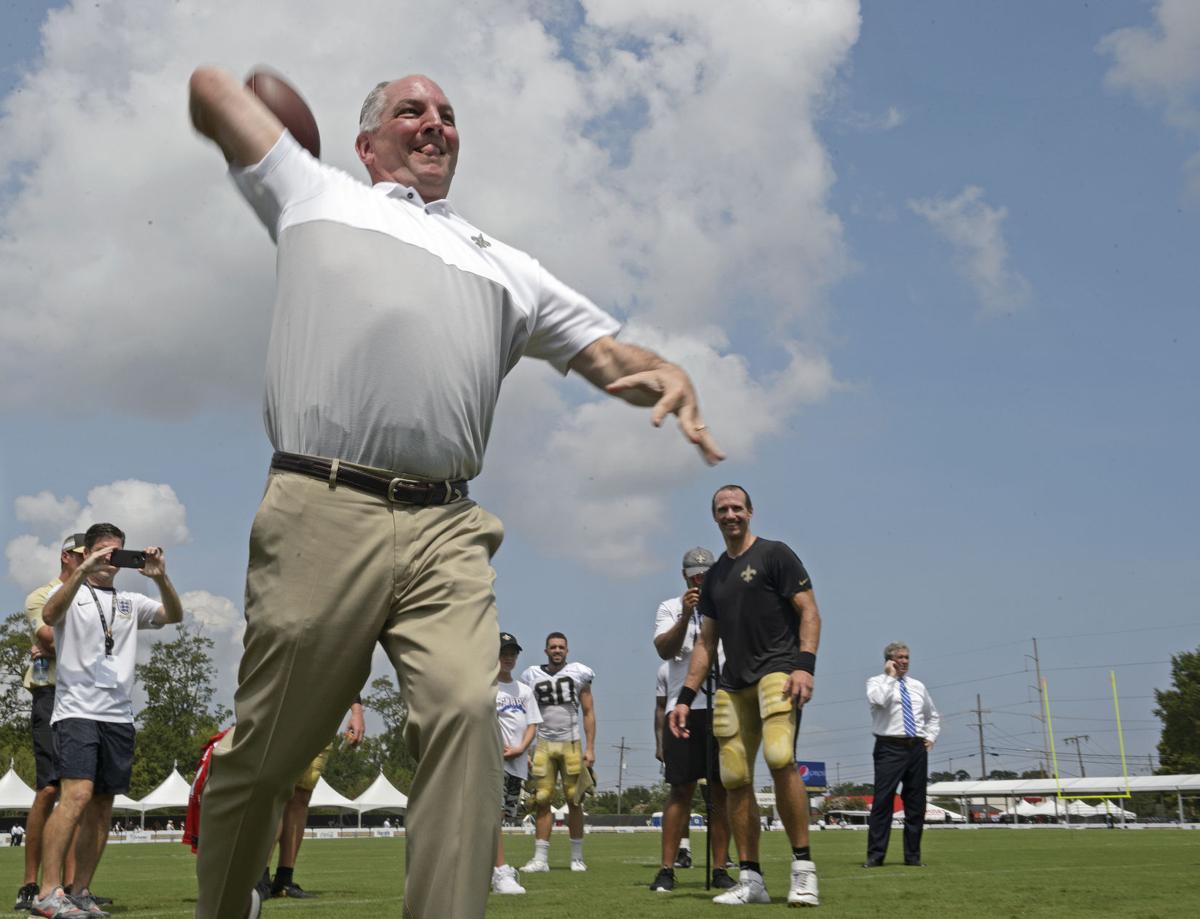 Gov. John Bel Edwards tossed a football with quarterback Drew Brees last Monday in front of a bank of television cameras in the state’s largest media market and then announced plans to renovate the Mercedes-Benz Superdome and keep the Saints in New Orleans for up to 30 more years.

Meanwhile, U.S. Rep. Ralph Abraham held a small news conference in Lake Charles to promise that he would build a new Interstate 10 bridge over the Calcasieu River if elected governor. Eddie Rispone, the other Republican challenging Edwards, met that day with about 50 potential supporters in Jefferson Parish.

While all three of the major candidates for governor are advertising on television in the run-up to the Oct. 12 primary election, Monday’s events illustrated an important advantage for Edwards that the others can’t match — using the power of his office to score free media attention to help sway voters his way.

Edwards has also held ceremonial bill signings at each of the state’s media markets in front of the cameras, met with teachers around the state to tout a pay raise and announced plans to spend hundreds of millions of dollars to minimize flooding in East Baton Rouge Parish.

Other than Gov. John Bel Edwards, Louisiana Democrats have little to cheer about

In recent days, thanks to relationships that have deepened since he became governor in January 2016, Edwards also has held fundraisers at the homes of local heavy hitters — including Donald Rouse, chairman of the board of Rouses, based in Thibodaux, and Louie Vielee, who owns video poker truck stops and a trucking company in Port Allen.

Abraham and Rispone are not known to have publicly complained about the governor’s effective use of his office. But state Rep. Alan Seabaugh, R-Shreveport, who attacks the governor frequently, complained last week when Edwards addressed the Bossier Chamber of Commerce and its regional partners on the achievements of the 2019 legislative session. A pollster and former state representative noticed.

“Incumbents always use their positions to identify with positive things, whether it’s a winning sports team or economic successes or public works projects,” said Ron Faucheux, based in New Orleans. “The practice is as old as politics itself.”

During an interview, Edwards said he is simply carrying out his normal duties.

“Am I supposed to stop being governor because I’m running for reelection?” he asked rhetorically.

Louisiana’s economy and state finances have turned around during his 3½ years in office, Gov. John Bel Edwards tells voters constantly as he s…

Gov. Bobby Jindal, when running for reelection in 2011, held news conferences around the state to announce grants meant to help farmers and help areas recover from natural disasters.

While it can be an advantage, incumbency can also work against a governor who is running for reelection during tough times.

Edwin Edwards suffered that fate in 1987 when he sought another term as governor while Louisiana’s economy was tanking amid a bust in oil markets.

“As governor, I wasn’t responsible for it, but I got the blame,” Edwards recalled. “You just do the best you can, but it’s hard.”

As governor, John Bel Edwards also must field questions from reporters at every public appearance — questions that might trip him up.

Rispone rarely has contact with the media, preferring to emphasize a television advertising campaign.

Abraham, after speaking Thursday to members of the Republican Women’s Club of Jefferson Parish, declined to answer questions afterward, saying he was late to his next appointment. He speed-walked to his pickup truck, several steps ahead of an aide, and a follow-up request to his staff for an interview went unanswered.

Monday, the Saints organization allowed Edwards to chat with Brees and head coach Sean Payton during practice in front of the TV cameras. Afterward, the governor, who quarterbacked Amite High’s football team for two years in the early 1980s, competed against Brees in an informal throwing contest. (Edwards joked later that he let Brees win.)

Edwards then discussed already-reported plans for the Saints and state government to spend $450 million to revamp the Superdome and extend the Saints’ lease for up to 30 years.

“On occasion, we have to make significant new investments,” he told reporters.

The next day, Edwards was able to tie himself again to the ultra-popular Saints quarterback when he released a public service announcement of him and Brees touting a program to help businesses owned by veterans.

Gov. John Bel Edwards likely won a short-term boost for his reelection campaign by how he handled preparations for Hurricane Barry, analysts said.

On Aug. 7, Edwards announced a $300 million project to dredge and widen 66 miles of waterways and reduce the flooding risk along five main drainage canals in East Baton Rouge Parish.

Standing beside him were Mayor-President Sharon Weston Broome, a Democrat, and U.S. Rep. Garret Graves, a Republican. The appearance further burnished the governor’s effort to win reelection as a Democrat who works in a bipartisan fashion to get things done in a state where Republicans dominate politically.

On July 31, Edwards held another event in the voter-rich New Orleans media market, at St. Bernard Parish Hospital, and announced results from a Tulane study that found people are seeing doctors more and visiting emergency rooms less thanks to his decision to make Medicaid available to the working poor.

“I bet they have stacked up more announcements over the next six to eight weeks that will drive his opponents crazy. It reminds people who the governor is,” said Roy Fletcher, a veteran Republican media consultant who helped plan similar events when Gov. Mike Foster ran for reelection in 1999.

Edwards also has the advantage of appearing on 20 radio stations across the state during his monthly call-in radio talk show, hosted by veteran broadcaster Jim Engster.

Abraham, during his talk Thursday, displayed the pitch he is making to small groups of voters at every opportunity around Louisiana.

He blamed Edwards for Louisiana’s loss of population during his term in office while most other states have gained.

Those who have left “have gone anywhere but where we need them — to stay and prosper,” Abraham said.

Louisiana lost 11,000 residents between July 1, 2015, and July 1, 2018, according to estimates from the U.S. Census Bureau. Eight other states also lost population over those three years, said John Couvillon, a Baton Rouge-based pollster and demographer.

Abraham chided Edwards for repeatedly pointing to his predecessor, Bobby Jindal, for unpopular actions that he has taken as governor.

"They blame previous administrations for their problems," Abraham said. "I’m not going to blame anyone. I’m just going to fix your problem as your governor and move this state forward."

Anti-abortion stance puts Louisiana Gov. John Bel Edwards at odds with much of Democratic base

Abraham complained that Louisiana has a high corporate income tax rate of 8%. He did not point out, however, that Edwards had supported lowering the tax rate in exchange for taxing activities that are currently exempt when the Legislature put that on the ballot and voters rejected the idea.

In his talk, Abraham also promised to cut taxes, lower insurance rates and build new roads and bridges but did not provide specifics.

Rispone, a wealthy contractor from Baton Rouge, is pitching himself as a nonpolitician who can solve the state’s problems. In his TV ads, he has tied himself closely to President Donald Trump, mimicking Trump’s rhetoric against illegal immigrants and sanctuary cities.

In his latest ad, Rispone identifies himself as a Christian conservative who seeks wisdom from God.

Rispone has yet to lay out his specific positions on how to create jobs, better educate children and spend the state's money.