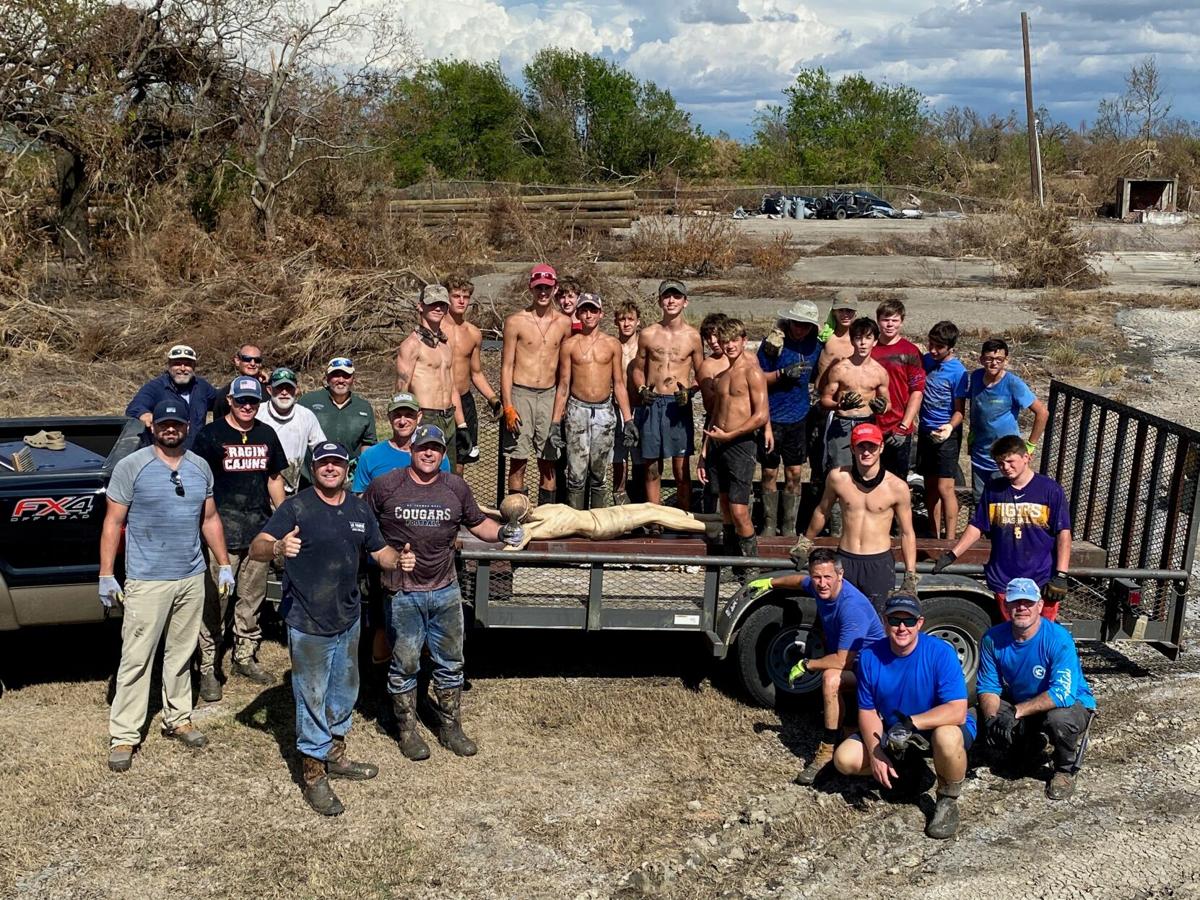 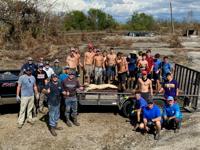 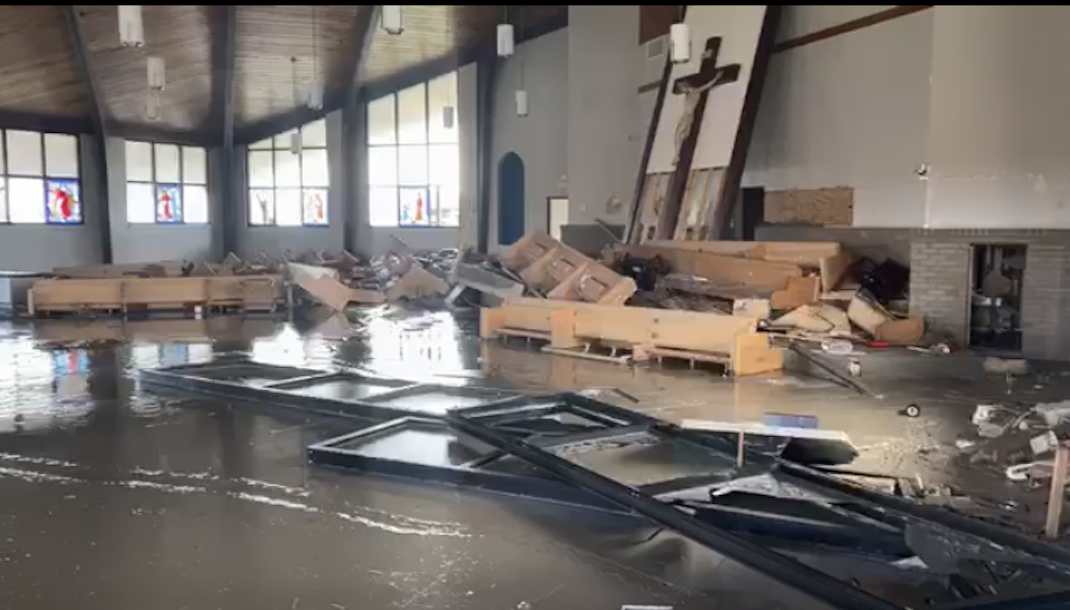 Our Lady Star of the Sea Catholic Church in Cameron sustained damage in Hurricane Laura. 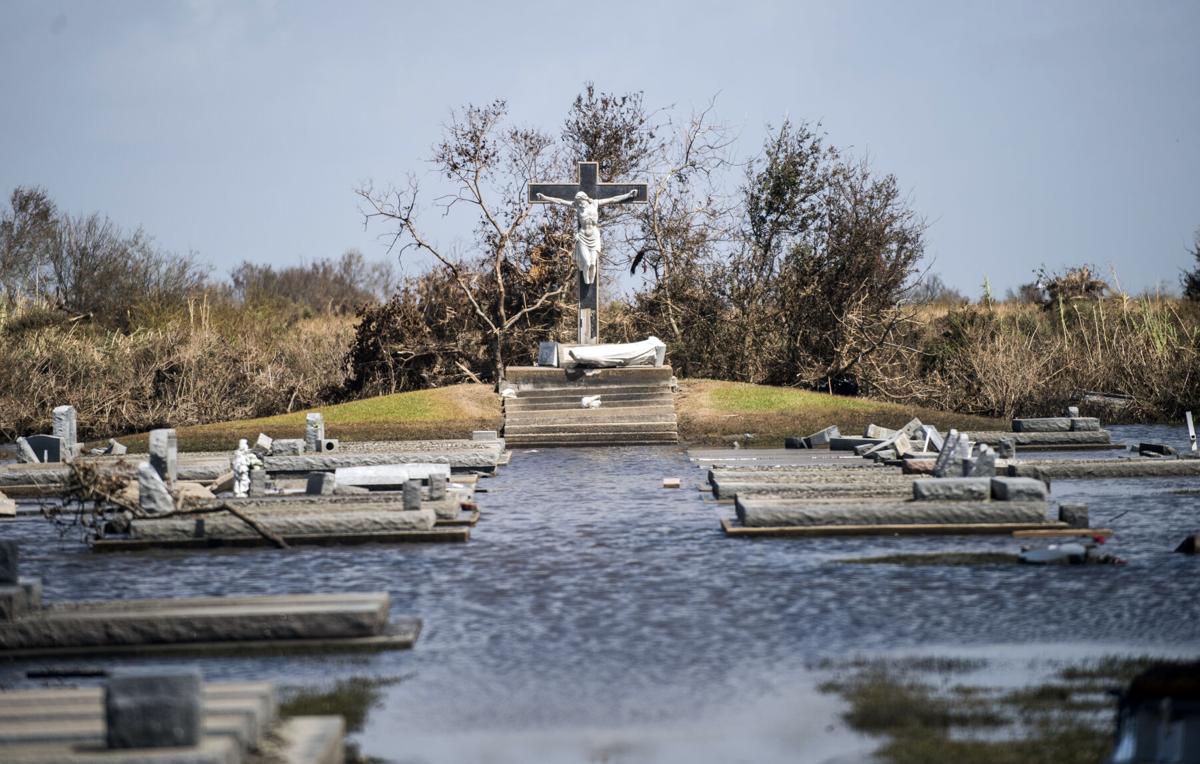 Damage from Hurricane Laura to the Our Lady Star of the Sea Cemetery is pictured Monday, August 31, 2020, in Cameron, La. 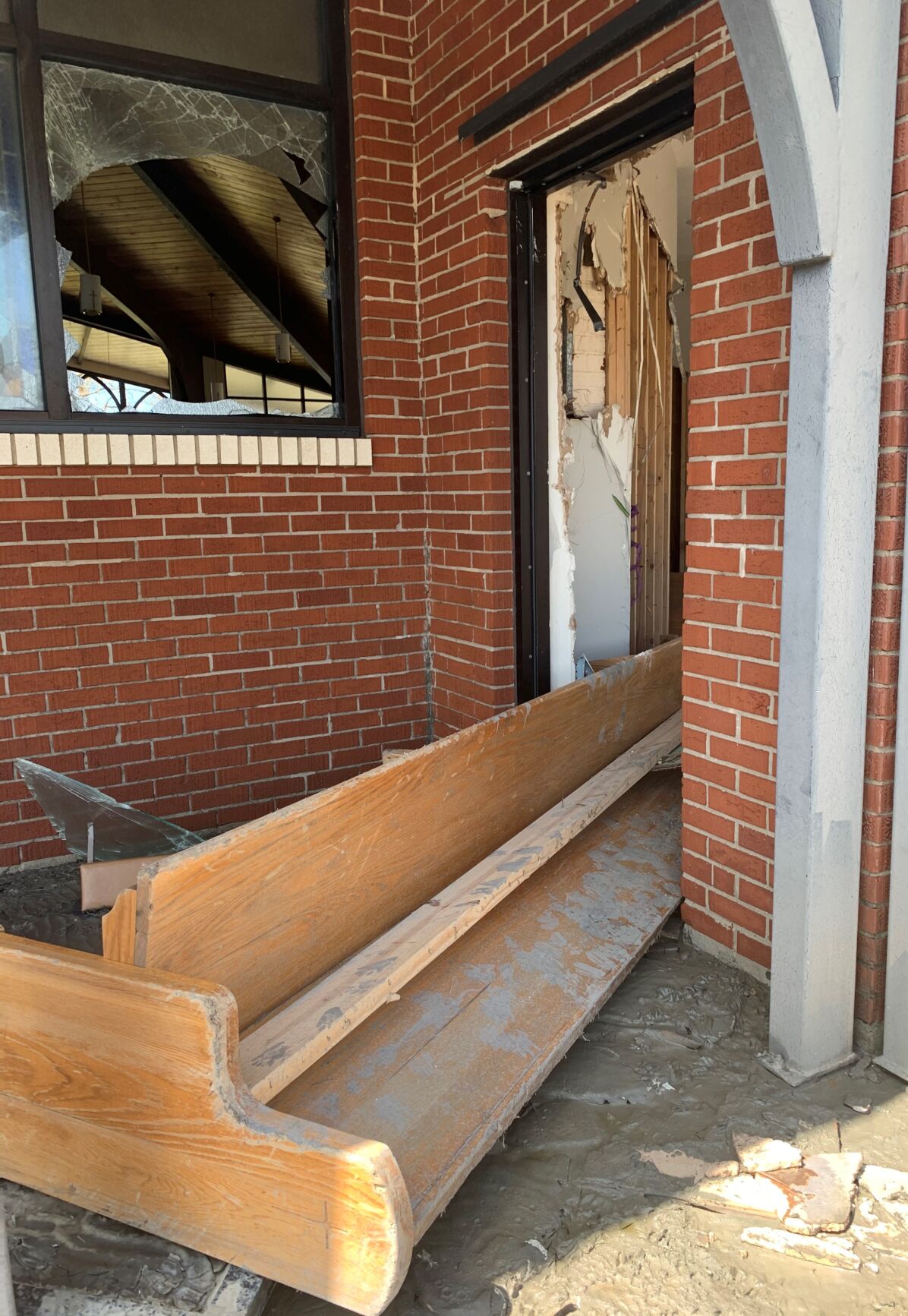 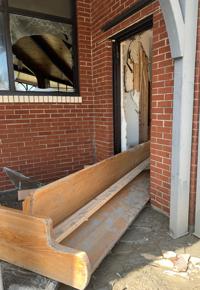 A pew from Our Lady Star of the Sea Catholic Church in Cameron, Louisiana, was pushed outside by Hurricane Laura's storm surge, shown Aug. 31. 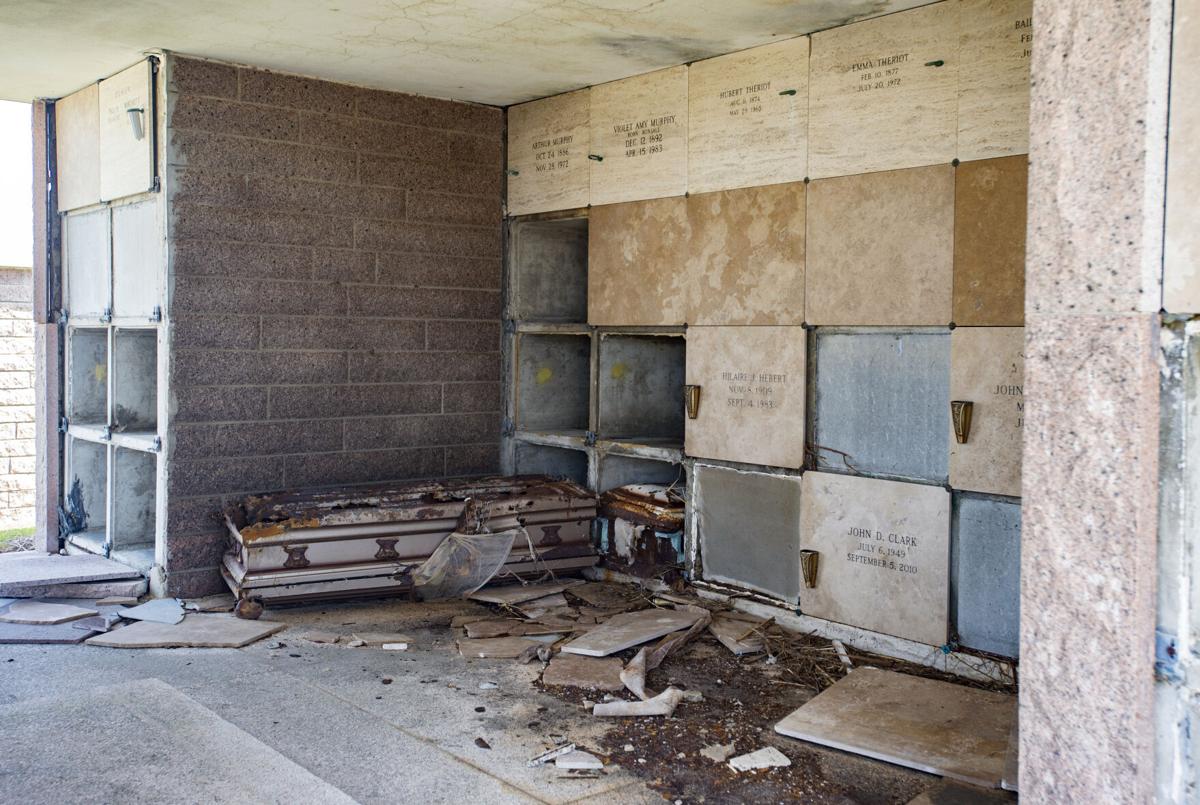 Damage from Hurricane Laura to a mausoleum in the Our Lady Star of the Sea Cemetery is pictured Monday, August 31, 2020, in Cameron, La. 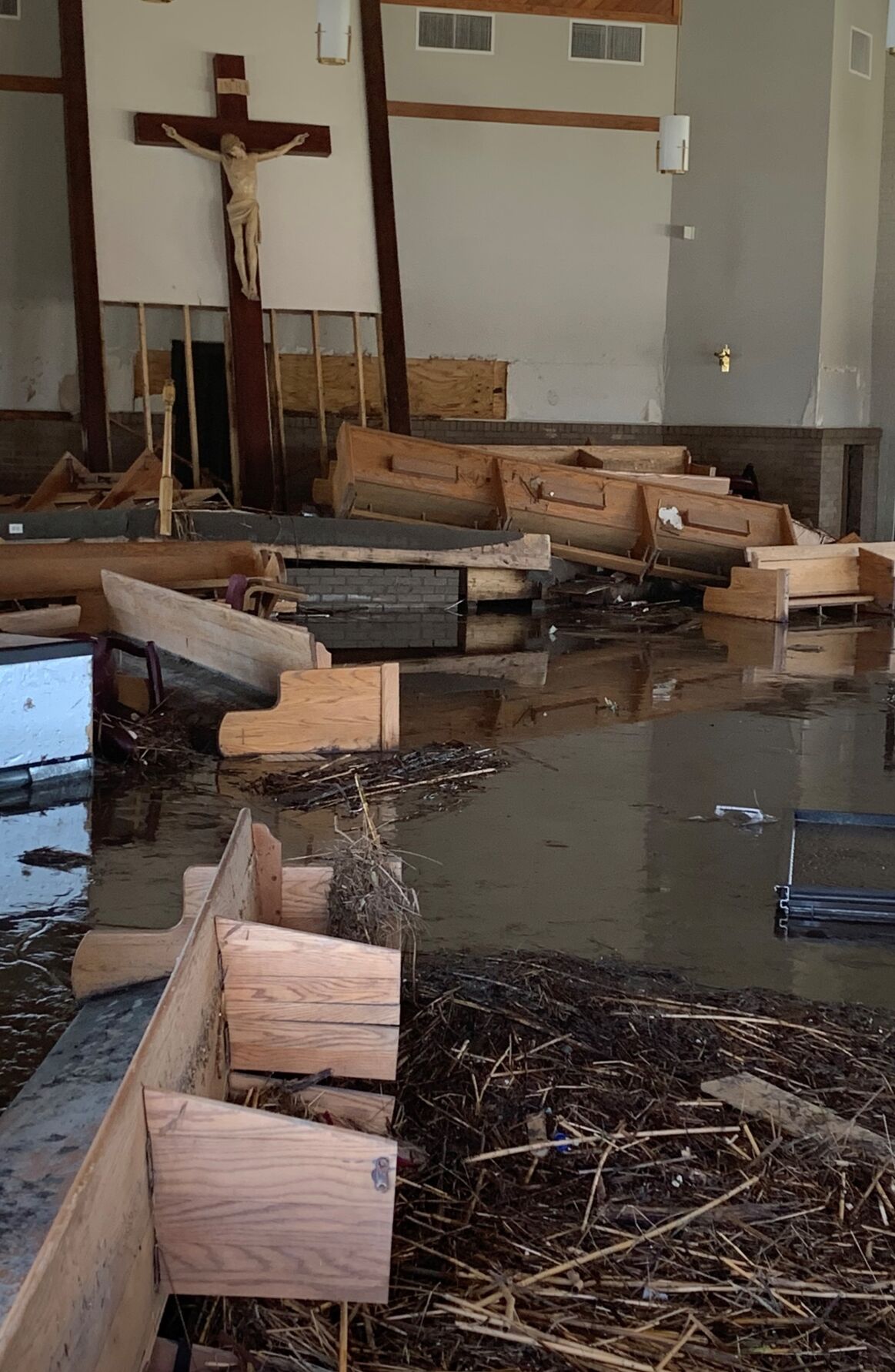 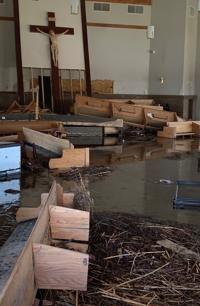 Water from Hurricane Laura pushed through Our Lady Star of the Sea Catholic Church in Cameron, Louisiana, shown Aug. 31, 2020. Photo by Claire Taylor.

Our Lady Star of the Sea Catholic Church in Cameron sustained damage in Hurricane Laura.

Damage from Hurricane Laura to the Our Lady Star of the Sea Cemetery is pictured Monday, August 31, 2020, in Cameron, La.

A pew from Our Lady Star of the Sea Catholic Church in Cameron, Louisiana, was pushed outside by Hurricane Laura's storm surge, shown Aug. 31.

Damage from Hurricane Laura to a mausoleum in the Our Lady Star of the Sea Cemetery is pictured Monday, August 31, 2020, in Cameron, La.

Water from Hurricane Laura pushed through Our Lady Star of the Sea Catholic Church in Cameron, Louisiana, shown Aug. 31, 2020. Photo by Claire Taylor.

Here's the worry Southwestern Louisiana area leaders are expressing of late: That Hurricane Laura and crippling damages it left behind in Cameron and Calcasieu parishes have been forgotten by the outside world. That no one would care.

But people in and around Cameron Parish have seen otherwise from a group of volunteers from Lafayette Parish.

A caravan of some 20-25 vehicles transporting 50 to 60 volunteers traveled from Lafayette to Cameron last Saturday to work in eastern Cameron Parish, mostly at Catholic churches badly damaged by the Category 4 storm but also at private homes. They also rescued a treasured crucifix from a demolished church, the site of a Catholic shrine, and brought it to St. Thomas More Catholic High School for safekeeping along with a statue of Mary from a nearby church.

The volunteer group was formed from a nucleus of sons and fathers at the high school in Lafayette, although a few others in the community enlisted in the effort.

“It was an organic response from St. Thomas More, mostly from dads texting one another,” said Lance Strother, campus minister at the high school. “Some wonderful volunteers hopped in with us but it was an awesome response from dads and sons."

The group left Lafayette early on the morning of Sept. 12, bringing its own supplies, and most of them returned late that night with sore muscles and a church crucifix that they rescued at Our Lady Star of the Sea in Cameron. A parishioner there said the group took the crucifix for storage at the high school until it can be used again in Cameron Parish.

Stephanie Rodrigue, director of development for the Lake Charles diocese, said that the volunteers also recovered a valuable statue of Mary from St. Eugene’s in Lake Chenier.

“I can’t say enough about them,” Strother said of the volunteers — dads and sons. “A bunch of them were friends and a bunch of them became friends. They stepped right in with a great attitude and great willingness to get in the mess and make a little dent to help people in great need.”

They did their clean-up work with, among other implements, claw rakes and shovels, chain saws, a Bobcat, flatbed trailers, tools and a tractor. When all else failed, they used their own muscles on such tasks as moving the crucifix that Strother suggested weighed some 300 or 400 pounds, made in Italy, from inside the church at Our Lady Star of the Sea to safety.

A video of the volunteers moving the crucifix with great strain yet with great teamwork has been making the rounds on social media, here and in Lake Charles, with comments of about the inspiration the volunteers lent people.

The group worked at St. Eugene at Grand Chenier and Sacred Heart of Creole last Saturday before heading to Our Lady Star of the Sea in the afternoon. They cleaned out mud and marsh grass from the sites and removed debris, among other tasks.

They worked closely with strategic partners in Cameron, including a deputy, a Homeland Security coordinator and Richard Brauns, a former STM parent, who owns a camp at Lake Chenier, Strother said. The deputy, he said, spoke only a few moments about the destruction in his home parish before “he broke down.”

In the afternoon, Carla Richard, a parishioner at Our Lady Star of the Sea, greeted the group at the church, where the church desperately needed cleaning and the crucifix needed rescue. She said the group, tired and mud-stained from their morning of work elsewhere, looked like “real angels” with their arrival at her church.

“I can’t tell you how wonderful the feeling was to see the boys and dads come out and rescue that cross,” Richard, who has been a church member for almost 50 years, said.

Strother said some of the group got to see the shrine at the church site, which includes a 7-foot marble statue. He said he did not know the history of the monument, but said, “It appears as though it stared the storm in the face and weathered it well.”

Indeed, the shrine, established in 1963 by Most Rev. Maurice Schexnayder, the second bishop of Lafayette, to seek protection from the stormy seas, has survived every storm since.

Richard said the monument fell backwards during Hurricane Rita but was not harmed.

The Mass to Avert Storms is said annually at the shrine on June 1, the start of the hurricane season, for protection. This year, Most Rev. Glen John Provost, bishop of Lake Charles, recognized the shrine as a diocesan shrine. He celebrated the June 1 Mass with the Rev. D.B. Thompson of Sacred Heart of Jesus in Creole; the Rev. Clyde Thomas of St. Eugene; and the Rev. Arvind Mintz of St. Peter the Apostle in Hackberry.

“It is priceless to us, in faith and in value,” said Richard. “The shrine and the church are what gets us from storm to storm.”

Provost, writing to Lake Charles area Catholics this week, assured them the area had not been forgotten. He said the U.S. Conference of Catholic Bishops has announced a voluntary national collection for the victims of various disasters throughout the country, including the area affected by Hurricane Laura.

He said the diocese has also received assistance from the Knights of Columbus; Catholic Charities USA; Catholic Mutual of Omaha; as well as Father Jack Wall and the Catholic Extension Society.

But seeing is believing, and the sight of fathers and sons from an adjacent diocese arriving to help was of great comfort.

Rodrigue said it was "an honor and a privilege to meet Mr. Strother and the men and young men who cleared away the aftermath of Hurricane Laura at St. Eugene Catholic Church in Grand Chenier and rescued the statue of the Blessed Virgin Mary, donated by deceased and faithful parishioners Charlie and Macilda (Miller) Theriot, then traveled to Our Lady Star of the Sea Catholic Church to remove the precariously learning, Italian design crucifix that beautifully hung above the altar just three weeks ago."

She said the Theriot and Miller families were pioneers in Grand Chenier.

State Rep. Ryan Bourriaque of Cameron Parish said, "My great grandparents were loyal parishioners of St. Eugene and this statue brings back so many memories of attending Mass with them. I am grateful for our friends at St. Thomas More who saved this statue that means so much to our family."

'The need is so great': Nonprofits worry that Hurricane Laura donations are trailing off

Hurricane Laura’s winds tore through southwest Louisiana with a ferocity that hadn’t been matched in 150 years, but the relief and fundraising…