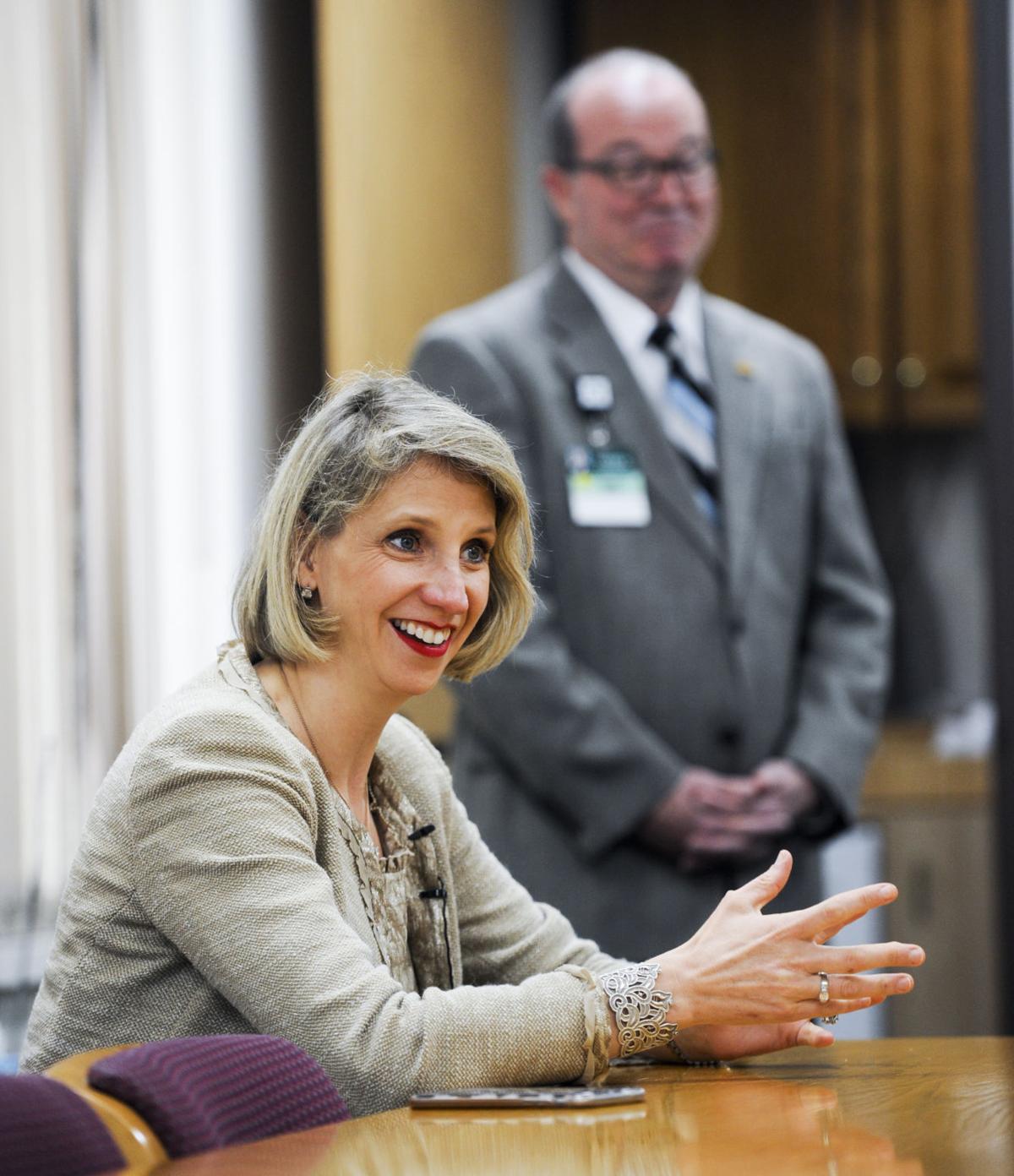 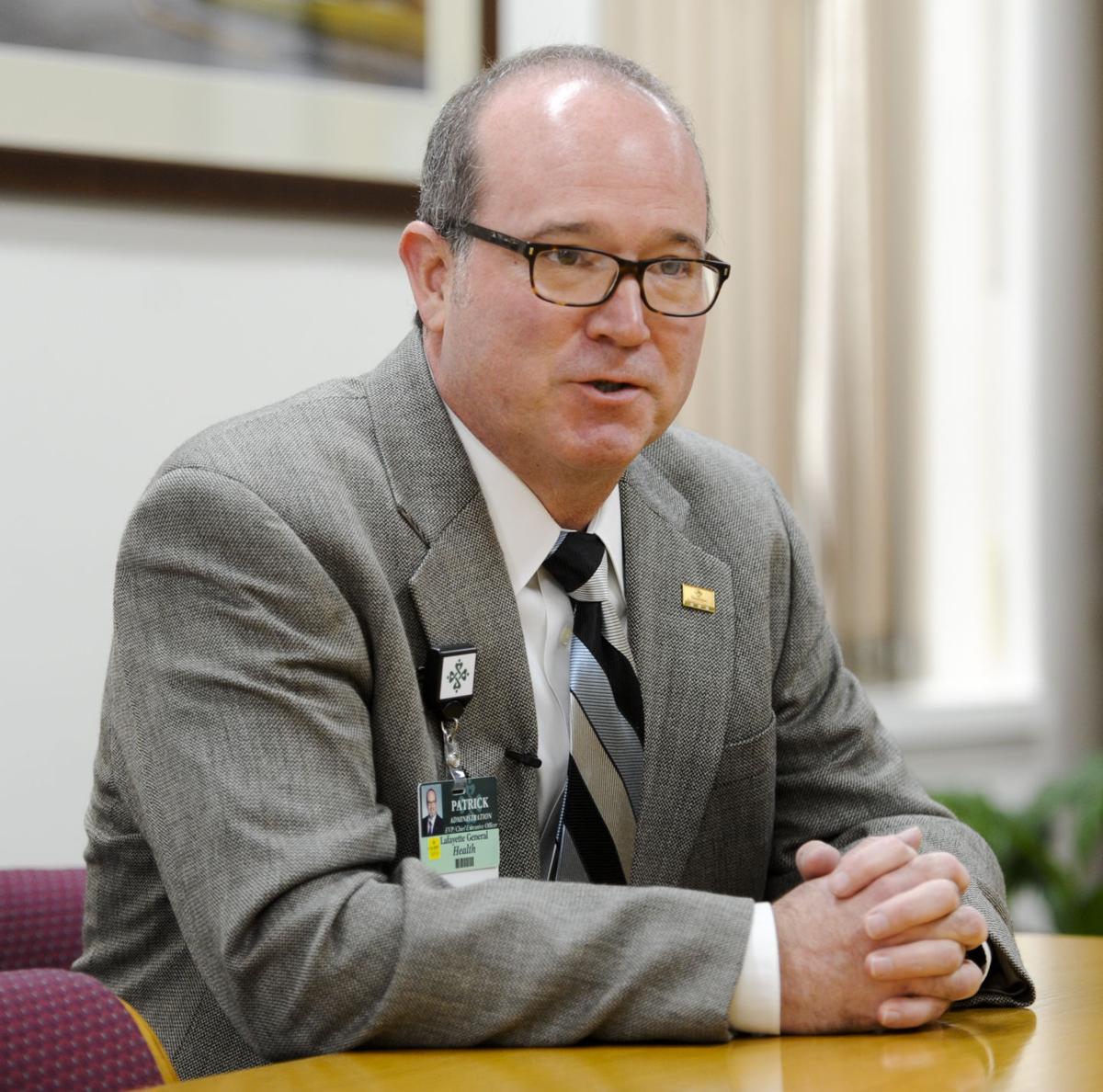 Executive Vice President/CEO of LGMC Patrick W. Gandy, Jr. speaks to the media before the arrival of Louisiana Secretary of DHH Rebekah Gee Friday, March 16, 2018 at University Hospital and Clinics in Lafayette, La.

Executive Vice President/CEO of LGMC Patrick W. Gandy, Jr. speaks to the media before the arrival of Louisiana Secretary of DHH Rebekah Gee Friday, March 16, 2018 at University Hospital and Clinics in Lafayette, La.

The secretary of the Louisiana Department of Health on Friday voiced frustration with the legislature’s failure thus far to resolve the state’s fiscal crisis, which threatens drastic cuts to education, health and social services.

Among the possible cuts is $1.15 billion to medical institutions, including indigent-care hospitals such as University Health Center and Clinics in Lafayette, where Secretary Rebekah Gee spoke to reporters.

“We don’t want people to have to die before they take it seriously,” said Gee, who was in town for a public forum on the administration’s plan to procure new Medicaid contracts.

The current-year state budget allocates $118.2 million in funding to UHC, according to the Legislative Fiscal Office, but Gov. John Bel Edwards’ proposed budget for the  2019 fiscal year budget reduces that to zero, as it does for nine other state-owned hospitals that are privately managed in New Orleans, Baton Rouge and elsewhere.

If enacted as proposed, the budget could prompt the private hospital operators to declare contract breaches. LCMC Health, which runs University Medical Center in New Orleans, has already notified Edwards that it will withdraw from its contract if it does not receive required funding under the contract.

Lafayette General Health, the system that runs UHC, has not given such a formal notice,but  could take a similar formal action, said Patrick Gandy, the system’s executive vice president.

“Certainly that’s under consideration, given what’s been proposed in the budget,” Gandy said. “We cannot continue to operate the facility with the proposed level of funding.”

The hospital receives about 54,000 unique patients annually, and as many as 1,000 jobs would be lost if it closes, Gandy said.

Lawmakers failed in a recent special session to replace $1 billion in revenue from a temporary sales tax that will expire July 1. The deficit could get knocked down to around $700 million, since federal income tax cuts will reduce the amount of state deductions available to taxpayers.

Still, the legislature must either raise revenue or cut from discretionary spending, which makes up only about a third of the budget and goes mostly to health care, education and social services. The regular legislative session convened on Monday and closes on June 4. Another special session may be necessary to address the fiscal crisis.

“They have no solutions for this budget problem," Gee said, referring to the legislature as a whole. "They just keep saying we don’t need to raise money. The reality is you can’t have services if you don’t pay for them."

She added, “Unfortunately we are not the federal government. We can’t borrow money from China, we can’t print our own money.”

State Sen. Fred Mills, R-New Iberia, who chairs the Health and Welfare committee, said he favors a half-cent sales tax to pay for critical services being cut in Edwards’ proposal. When it comes to the indigent-care hospitals, Mills said, lawmakers may have to consider which areas of the state can do without them.

“It has to be methodically broken down. Could some areas withstand a closure, versus other areas?” Mills said. “Every issue that’s coming to me as chairman of Health and Welfare, when I look at it, I don’t know how to prioritize those types of dire consequences.”

Mills noted that shuttering the hospitals could worsen the deficit since the private partners provide the state with hundreds of millions of dollars in annual lease payments. The state uses the lease proceeds to leverage additional federal funding for health care.

The combined value of the lease payments and federal funding associated with those payments exceeded $525 million in 2016, according to a report last year by economist Loren Scott that was commissioned by the public-private hospitals.

“There is some lost opportunity by not funding these hospitals,” Mills said.

Wading into yet another grim budget projection, Louisiana House members on Tuesday heard worst-case predictions of the fiscal fallout that wil…