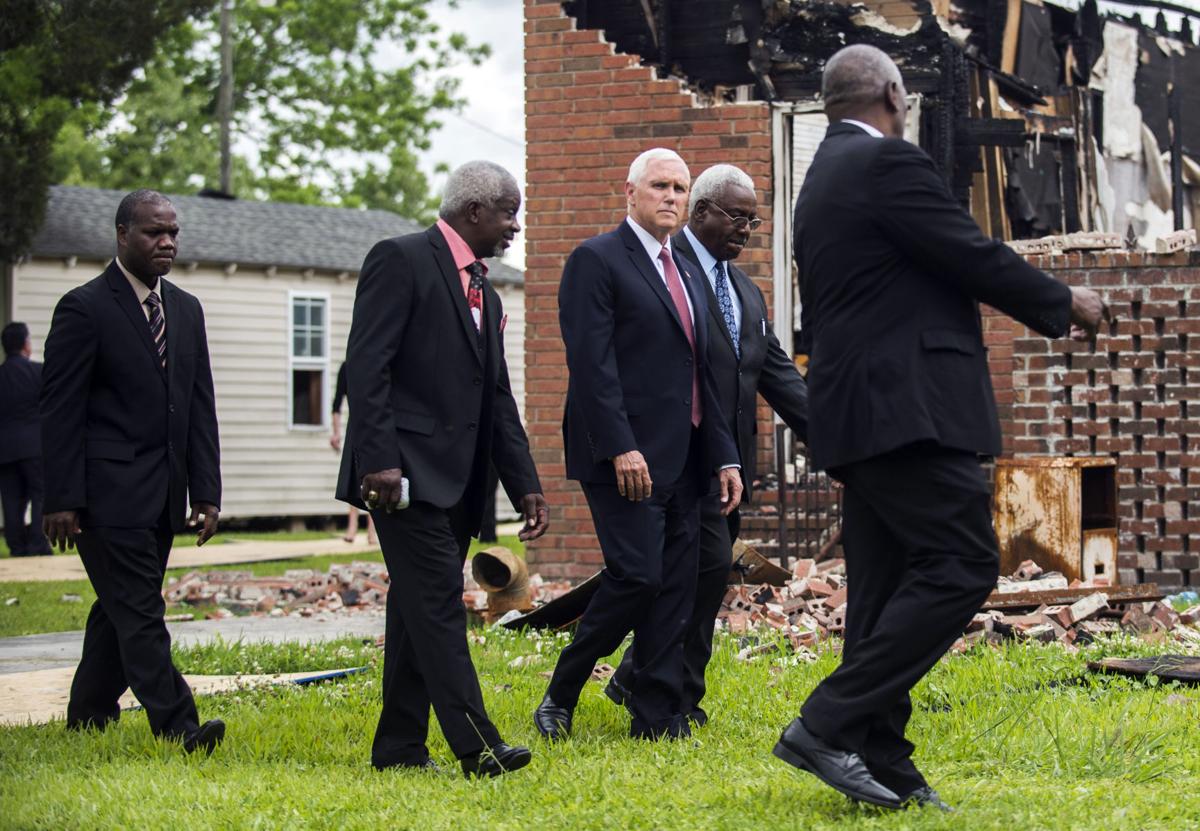 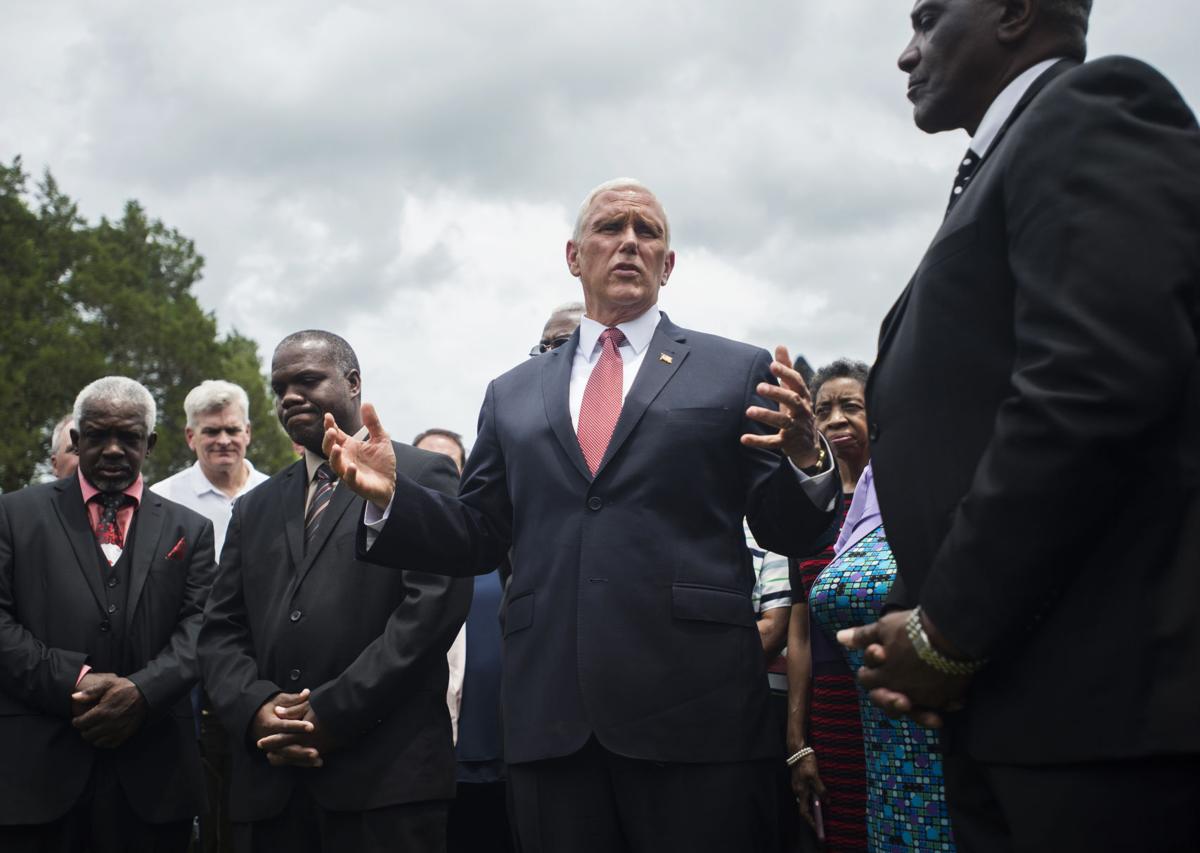 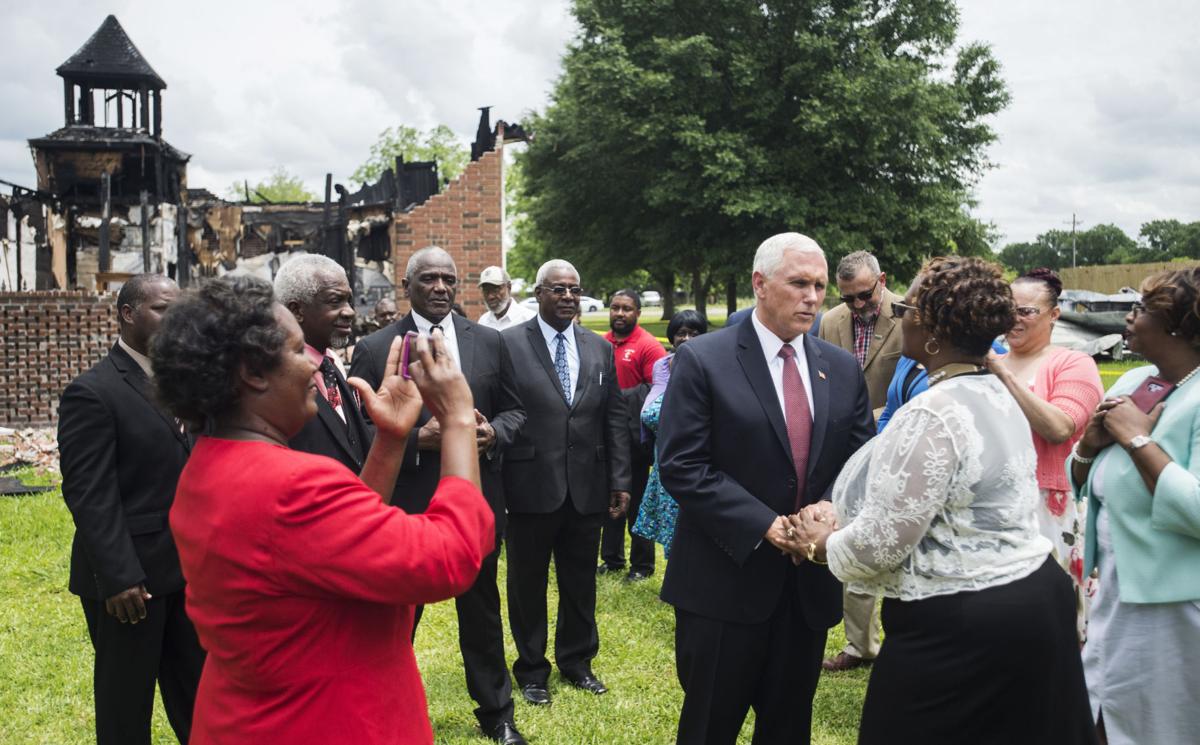 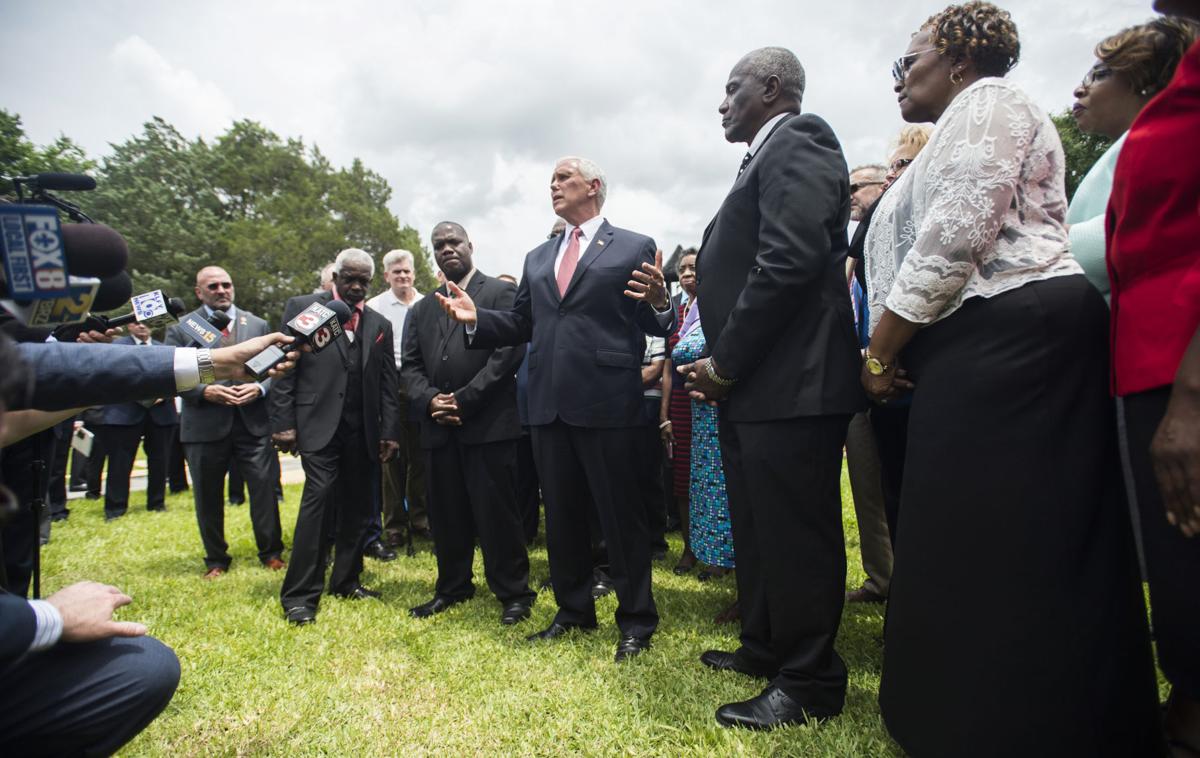 Vice President Mike Pence, center, speaks with pastors, parishioners and the media Friday, May 3, 2019, at Mt. Pleasant Baptist Church, one of three historically black churches in St. Landry Parish that were intentionally burned, in Opelousas, La. 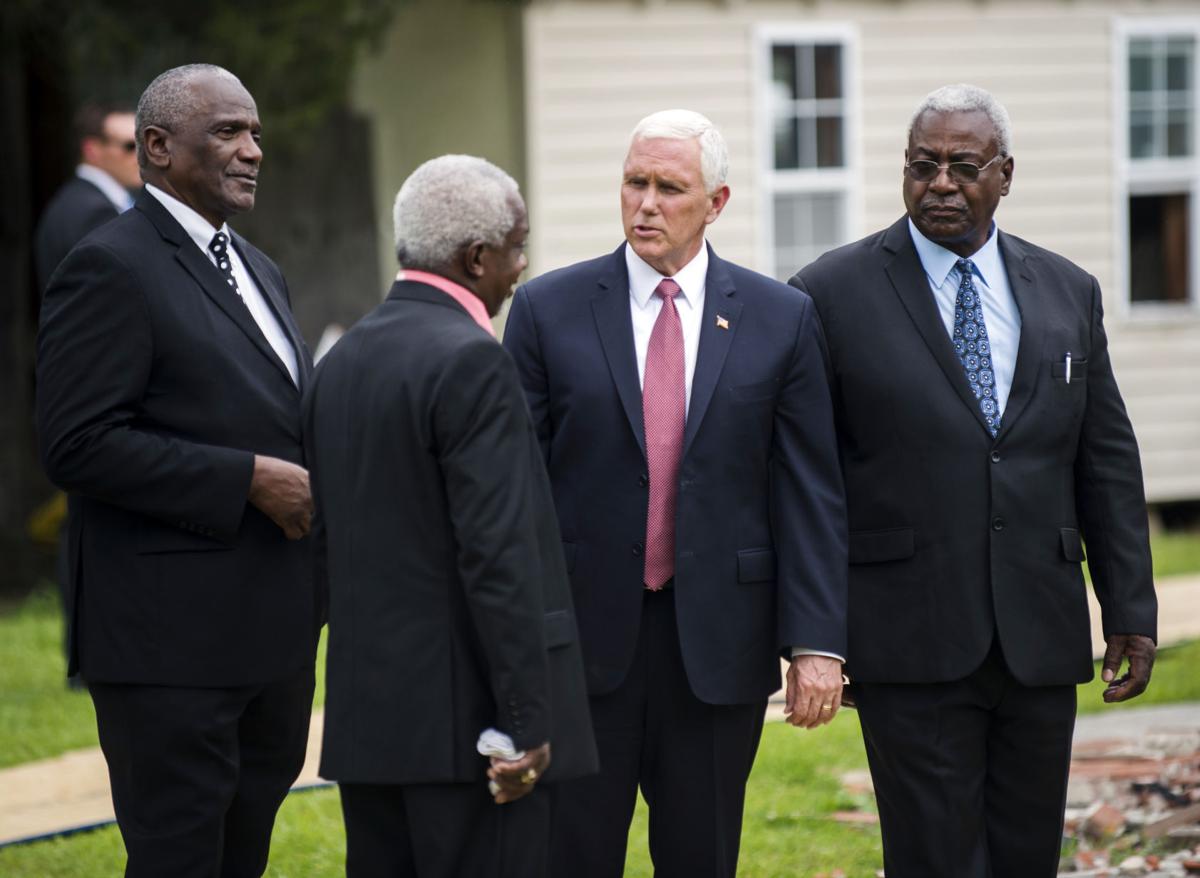 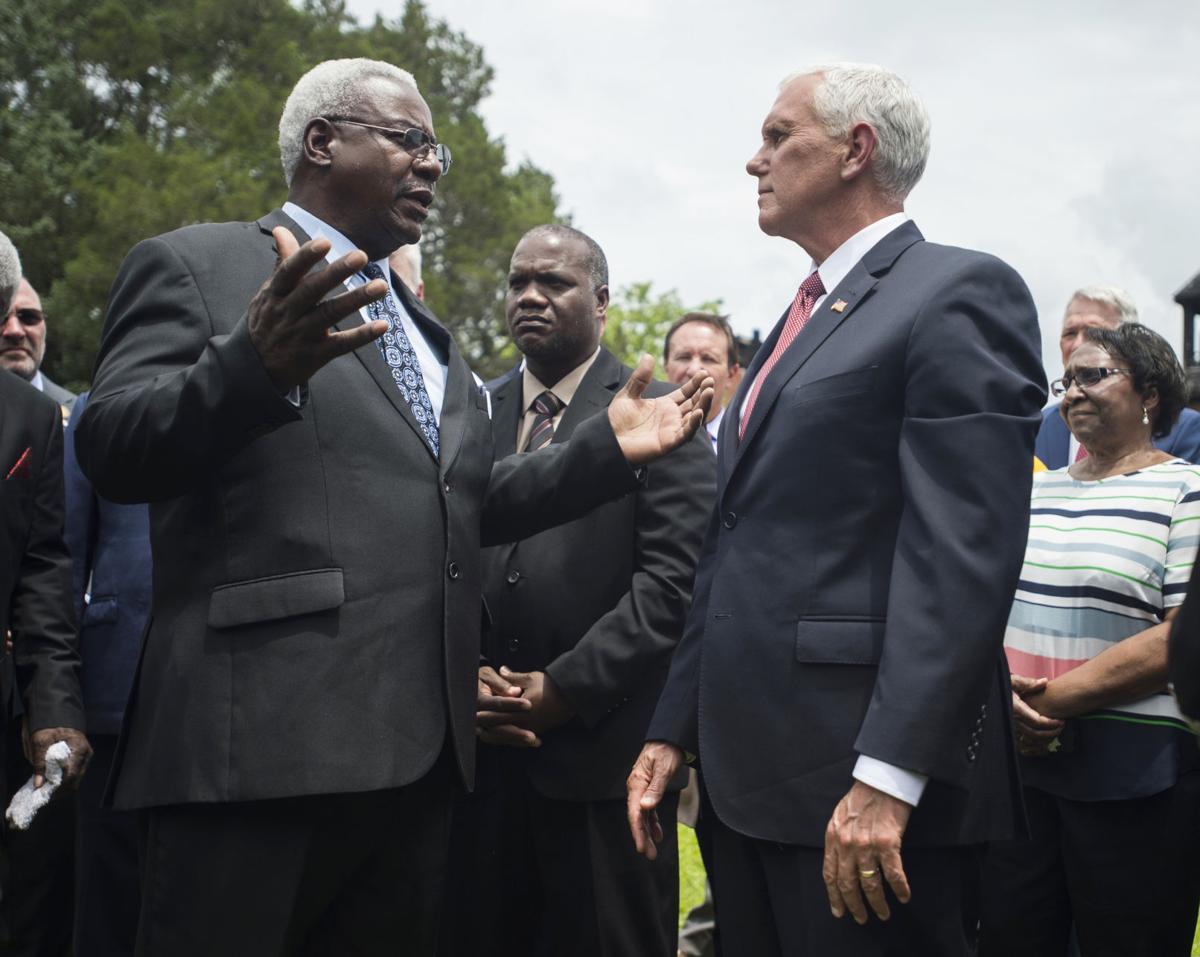 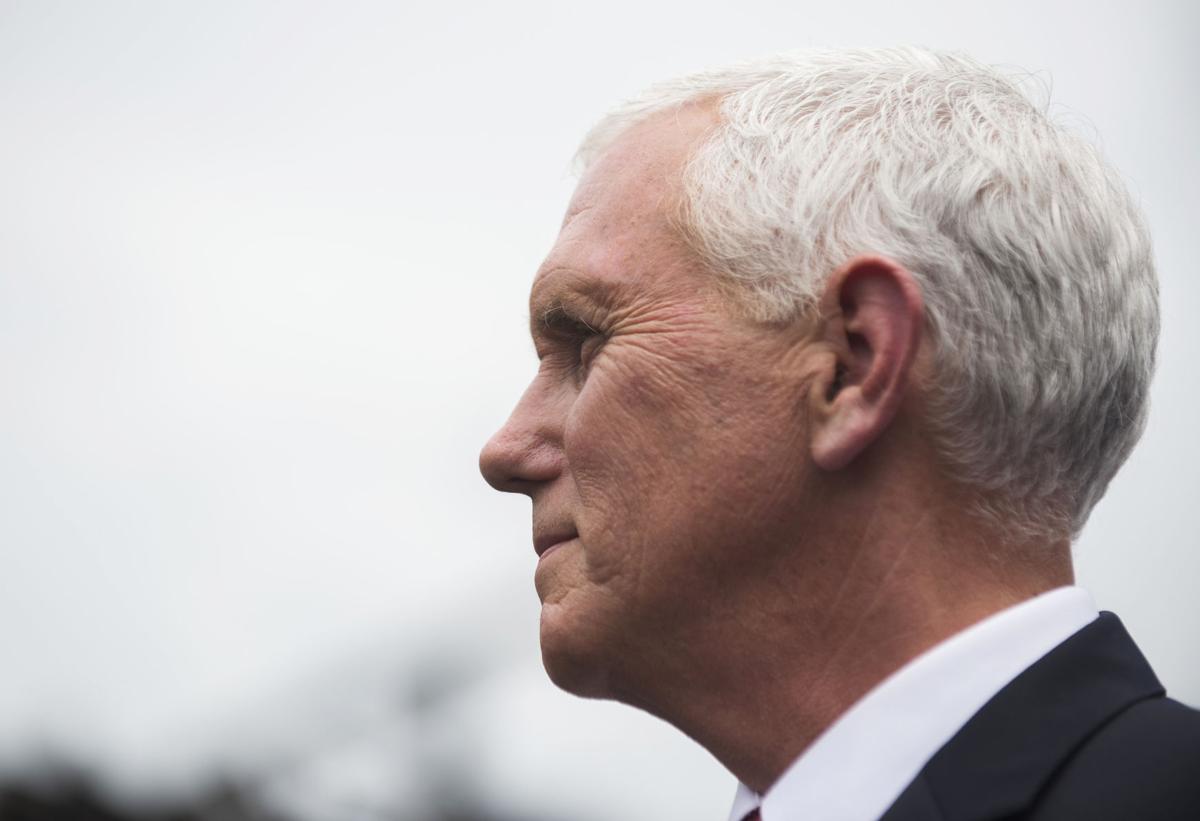 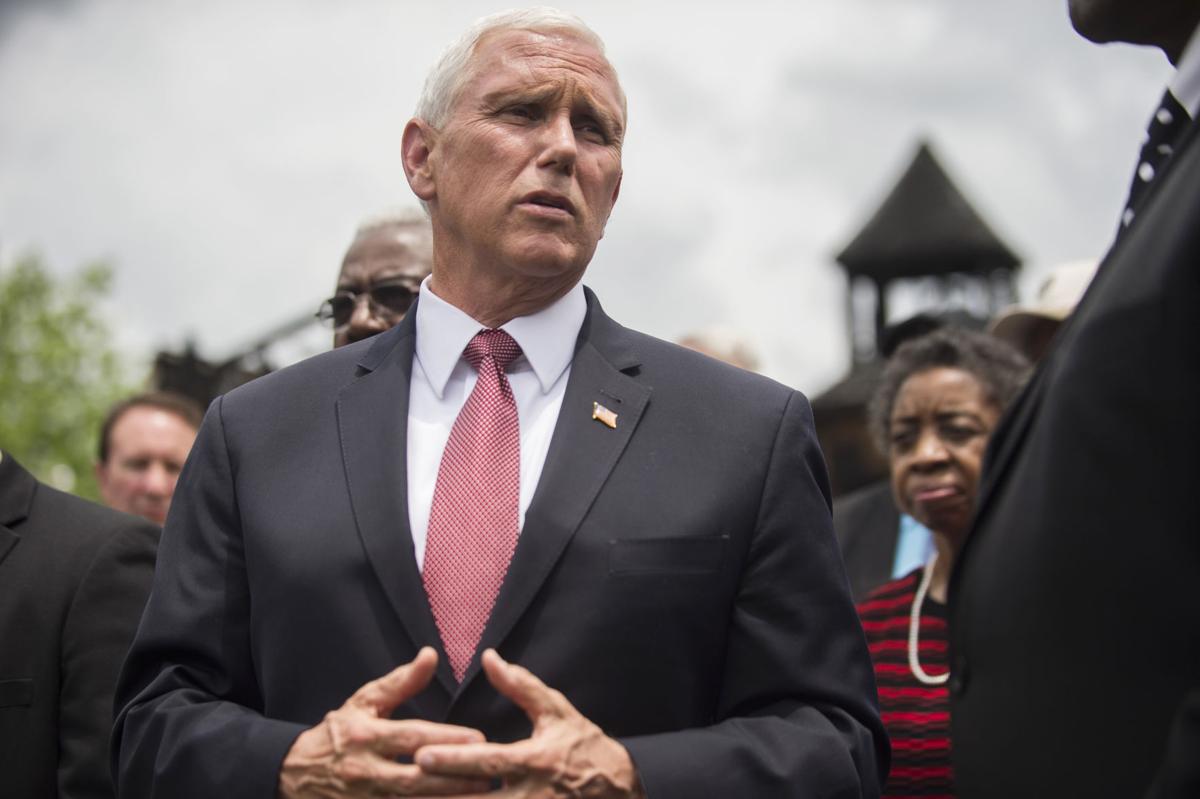 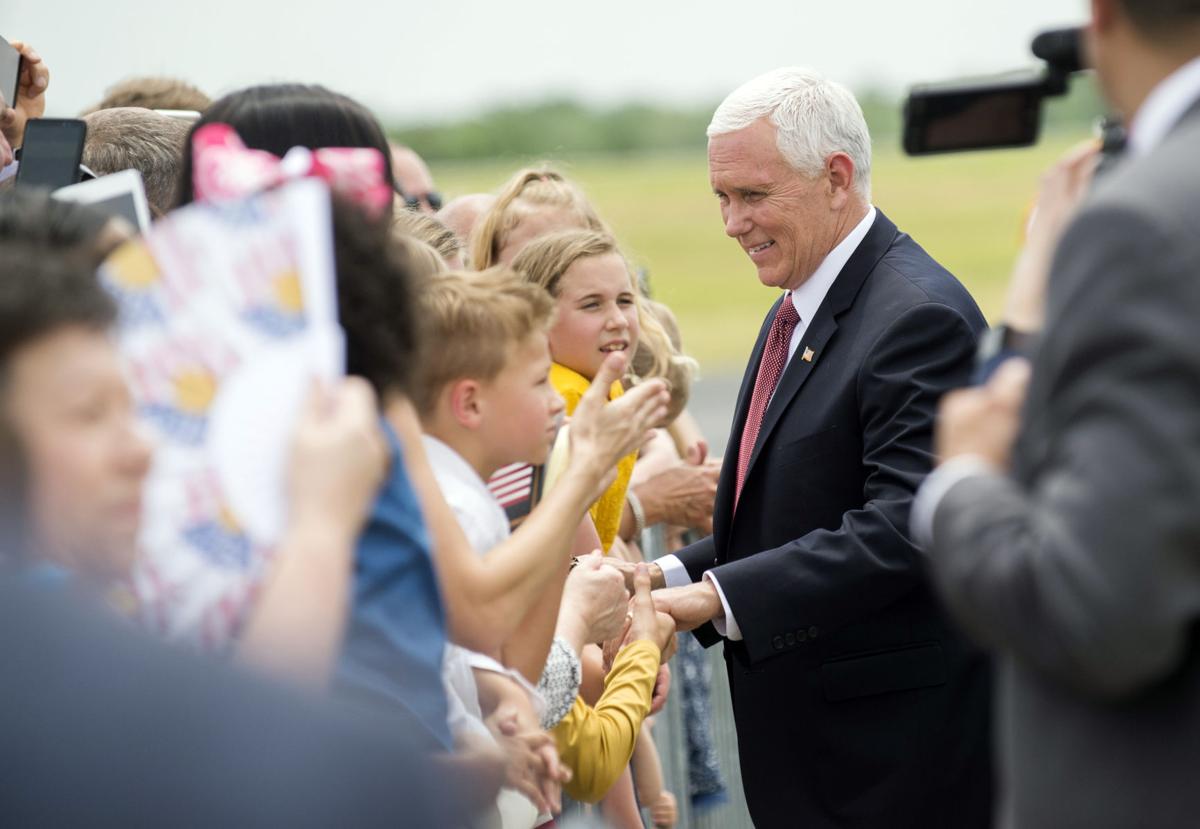 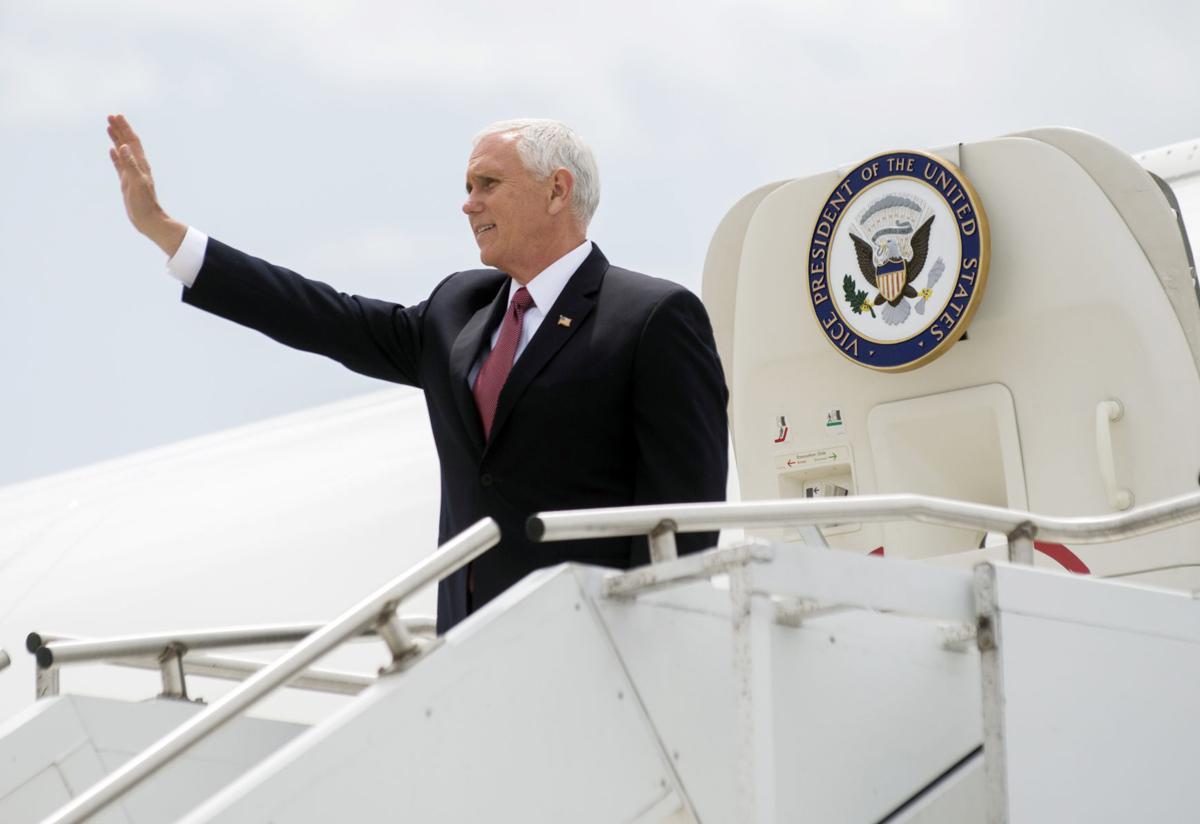 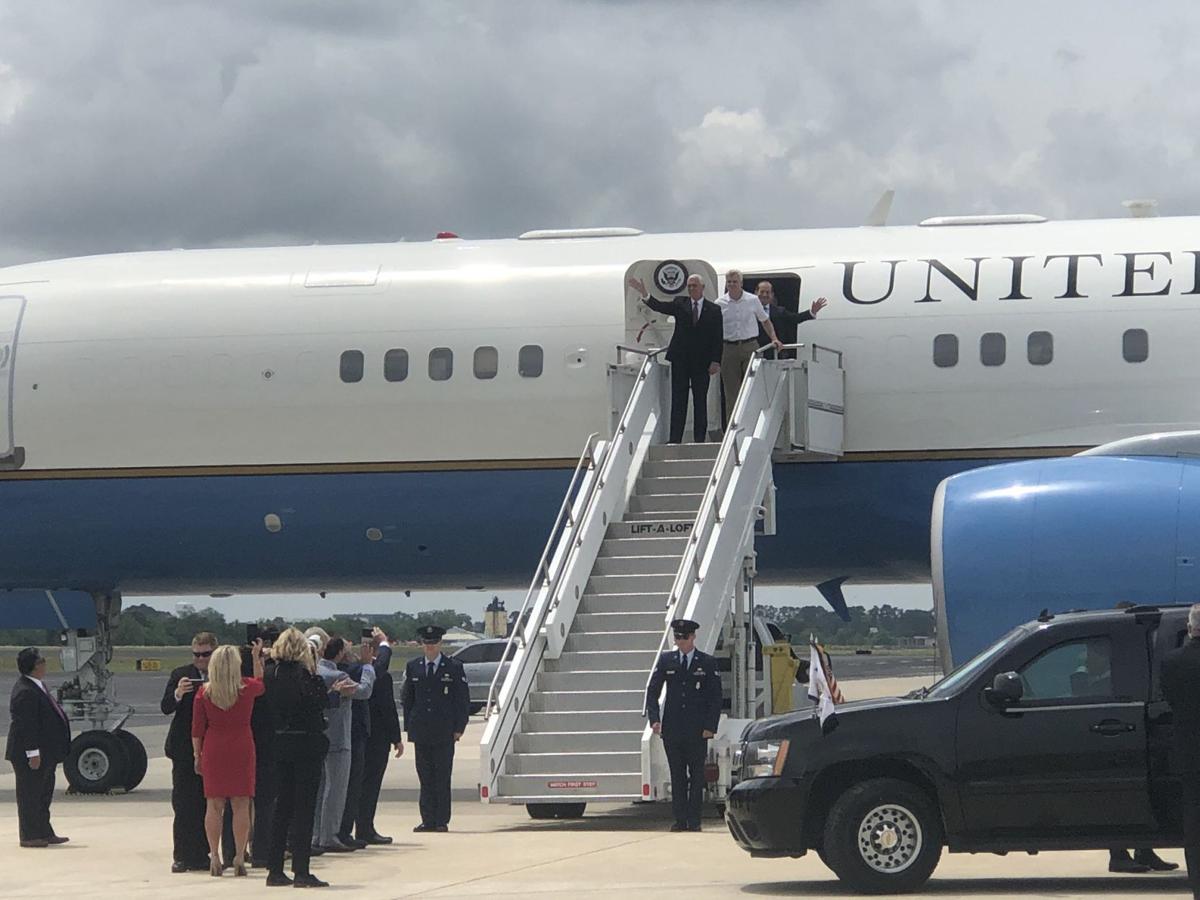 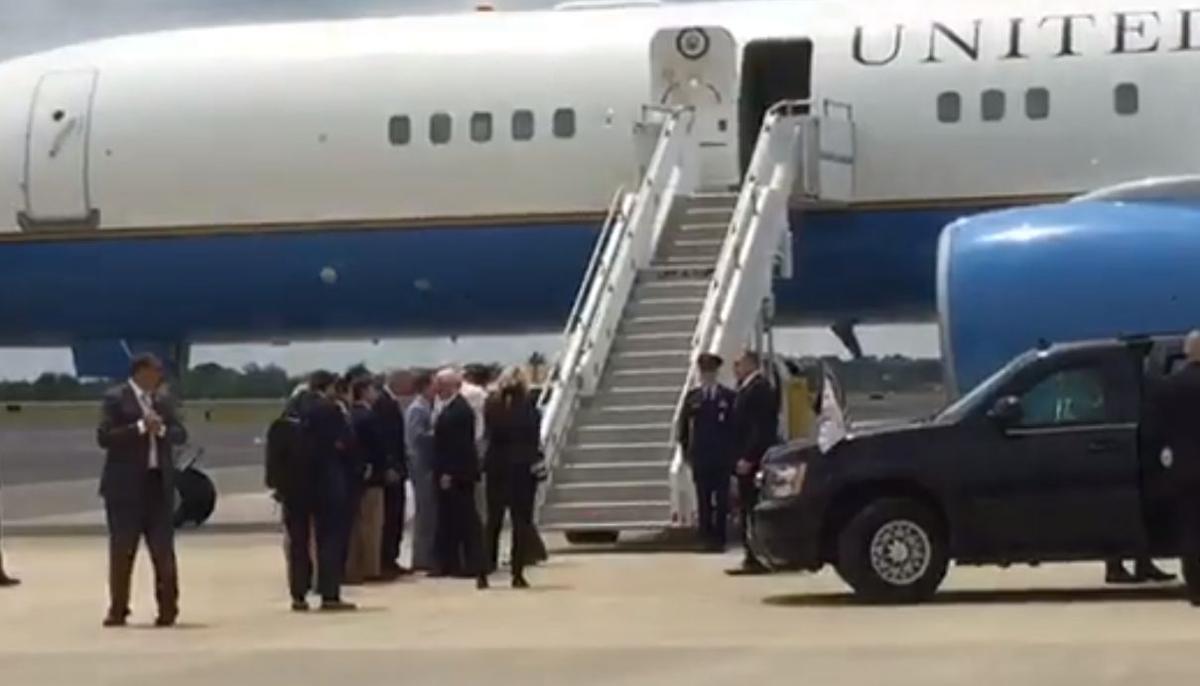 Vice President Mike Pence has landed in Lafayette as he tours the churches burned down in April. 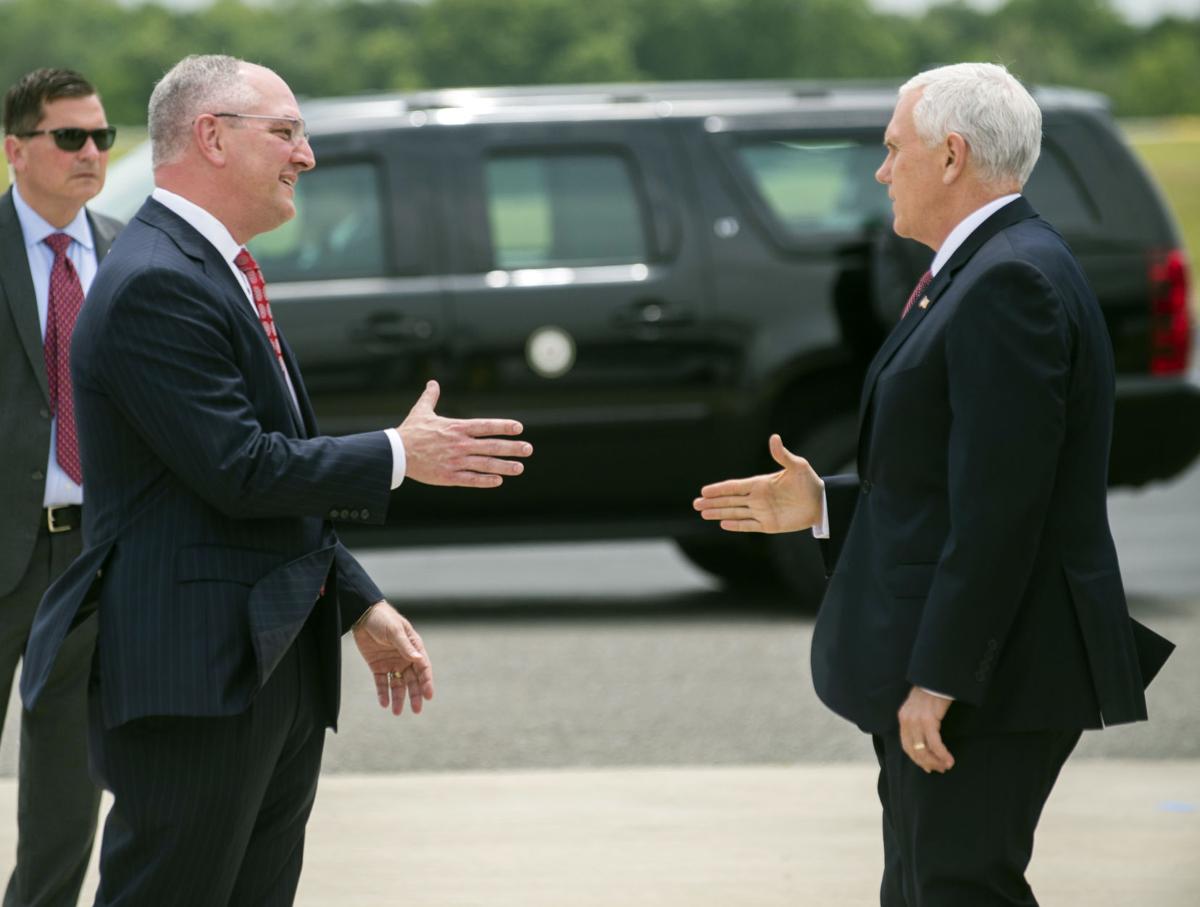 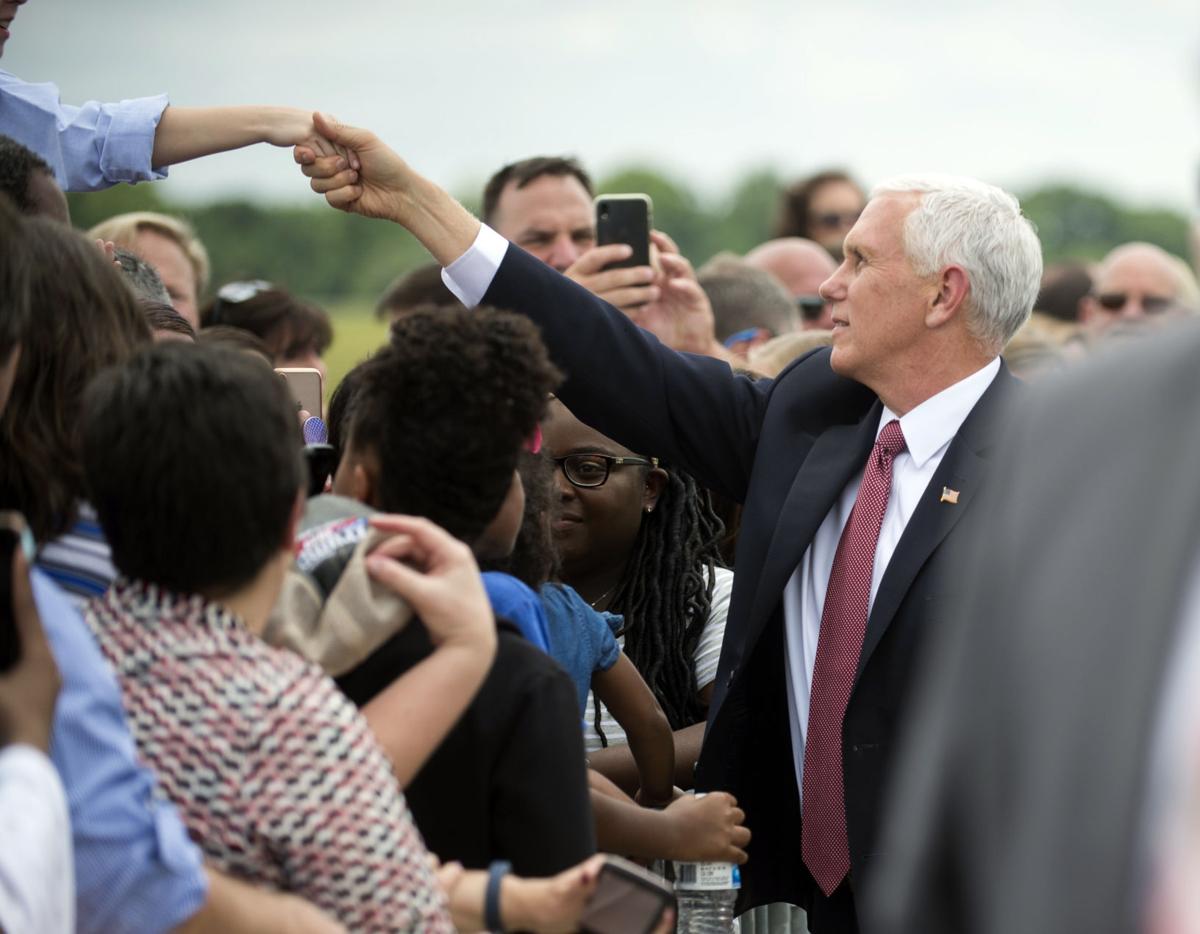 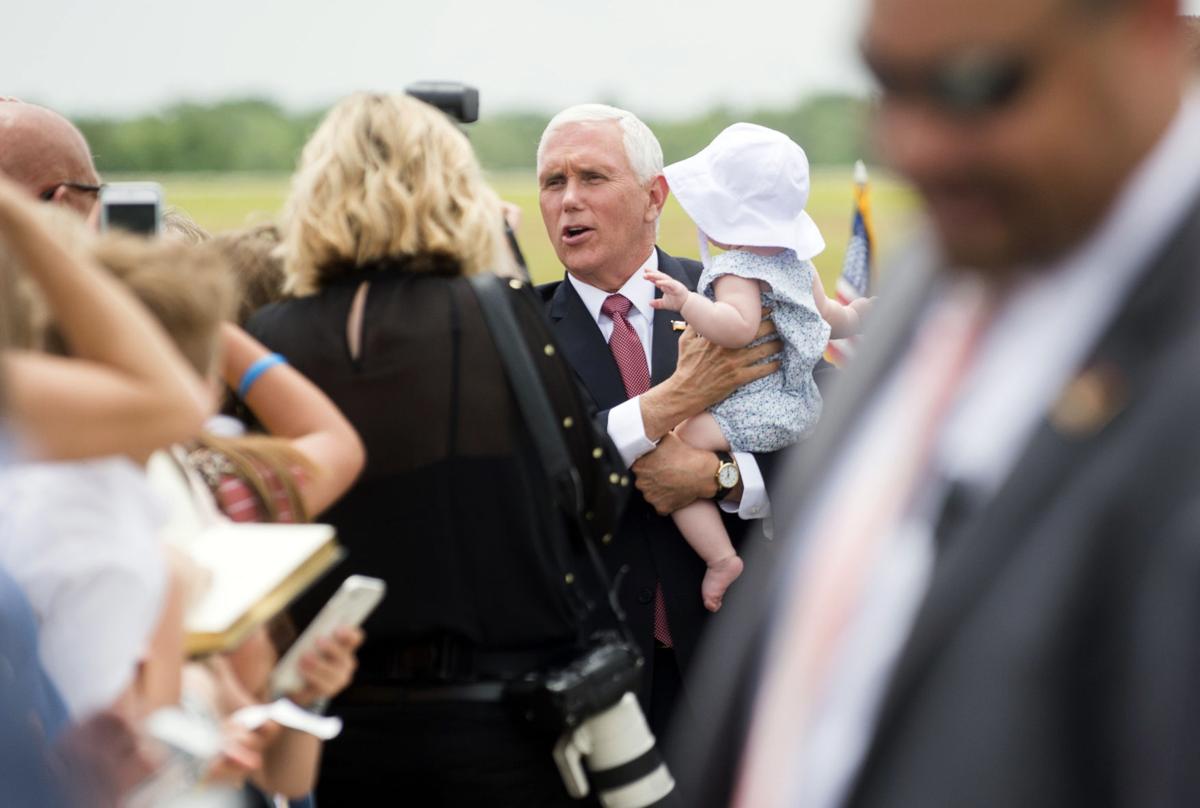 Vice President Mike Pence, center, speaks with pastors, parishioners and the media Friday, May 3, 2019, at Mt. Pleasant Baptist Church, one of three historically black churches in St. Landry Parish that were intentionally burned, in Opelousas, La.

Vice President Mike Pence has landed in Lafayette as he tours the churches burned down in April.

Vice President Mike Pence visited with parishioners at Mt. Pleasant Baptist Church on Friday, decrying continued attacks against communities of faith against the backdrop of the charred worship house.

Pence said the “attacks on communities of faith must stop,” as gathered parishioners nodded in agreement.

“Sadly, we live in a time when attacks on communities of faith have been all too frequent. The fires here at Mt. Pleasant, Greater Union and St. Mary’s are part of a story that continued last week in California at a synagogue, last fall in Pittsburgh, at a mosque in New Zealand and at churches on Easter Sunday in Sri Lanka,” Pence said.

The vice president praised the charity, steadfastness and positive example the group of roughly a dozen parishioners and community members showed in the face of evil. Matthews, the accused arsonist, was charged with three state hate crime counts in connection with the fires.

“Your resilience, your faith and your courage in the wake of this unspeakable evil has inspired the nation,” Pence said.

He said he was especially touched by the compassion the church members and pastors showed Matthews after he was apprehended.

The vice president flew into Lafayette Regional Airport around noon where he met with families and community members before traveling to Mt. Pleasant. He was joined by a contingent of Louisiana elected officials, including Gov. John Bel Edwards, most of the Louisiana Congressional delegation and Attorney General Jeff Landry.

The Rev. Harry Richard, of Greater Union Baptist Church, said he was appreciative of the elected officials’ continued support and for the presence of Vice President Pence. He said it confirmed that there’s people ready to help during these trials.

“I can’t express enough how the love of God has shown up in you guys,” he said.

Pence took a moment with each parishioner shortly after he arrived at the church. Congregants said he offered prayers, asked about their well-being and prayed with them, some on the receiving line and others in private moments. He also offered thanks that no one was injured in any of the fires.

The vice president also took a private moment when he first arrived to meet with the three pastors of the effected churches and the Rev. Freddie Jack, president of the Seventh District Missionary Baptist Association.

OPELOUSAS — Digital evidence presented Monday places 21-year-old Holden Matthews at the scene of all three fires he is accused of setting, inv…

Pence’s visit came one month after the destruction of the churches. The vice president and President Donald Trump were criticized at the time for their lack of immediate response to the St. Landry fires, especially after their vocal support of France and Notre Dame Cathedral when the storied church was damaged following an accidental fire only a week later.

The Rev. Kyle Sylvester, of St. Mary Baptist Church, said too often people focus on the things they felt weren’t done right. No matter the time frame, he said he was happy to receive the White House’s support and felt Pence came with a sensitive spirit.

“As far as the administration is concerned, I’m just glad they came and they reached out when they did. I do believe it was a genuine visit,” Sylvester said.

While Pence called the acts evil, he did not acknowledge the arsons as a hate crime or note the racial significance of the three historically black churches. The bias that led to Matthews’ hate crimes charges has not been revealed by authorities, though he has been linked to anti-Christian beliefs through his affiliation with black metal music and songs he’s penned for black metal projects.

The Rev. Gerald Toussaint, of Mt. Pleasant Baptist Church, called for an end to hate in America.

“There is something better for this country than hatred, envy and strife,” Toussaint said.

Pence said the congregations of the burned churches were a role model of Toussaint’s call to lead with love, and an inspiration to the country. He said their foundation of love and faith remained strong.

“While the structure of these churches burned, what was evident to people all across America is that the foundation was firm – a foundation of faith,” Pence said.

Mt. Pleasant congregant Oradel Hines said she was touched by Pence’s visit and said she feels blessed to have grown up in the church and “still be here carrying on the work of the good Lord.” Hines has been a member of Mt. Pleasant for more than 50 years, she said.

“He said to keep on praying and to continue doing what you’re doing, and God will help you all,” she said.

Congregants from the destroyed churches weren’t the only ones gathered to meet with the vice president. Community members and supporters from other local churches joined their brothers and sisters in faith in a show of solidarity.

Local residents Shannon Bernard and Sancha Smith said standing in the face of trials requires the collective strength and support of the community. Rebuilding can’t be done alone, they said.

“We’ve all been affected because we all have family members in one or all of these churches,” Bernard said. “It’s extremely important that we come out and show each other that we’re here, we’re present, not just in prayer, but physically, mentally and spiritually.”

The physical presence of the state and federal leaders was huge, Smith said. It helped show they understand the weight and gravity of the pain the congregations are experiencing, Bernard said.

The two women said they continue to pray for their community and the churches’ resurrection.