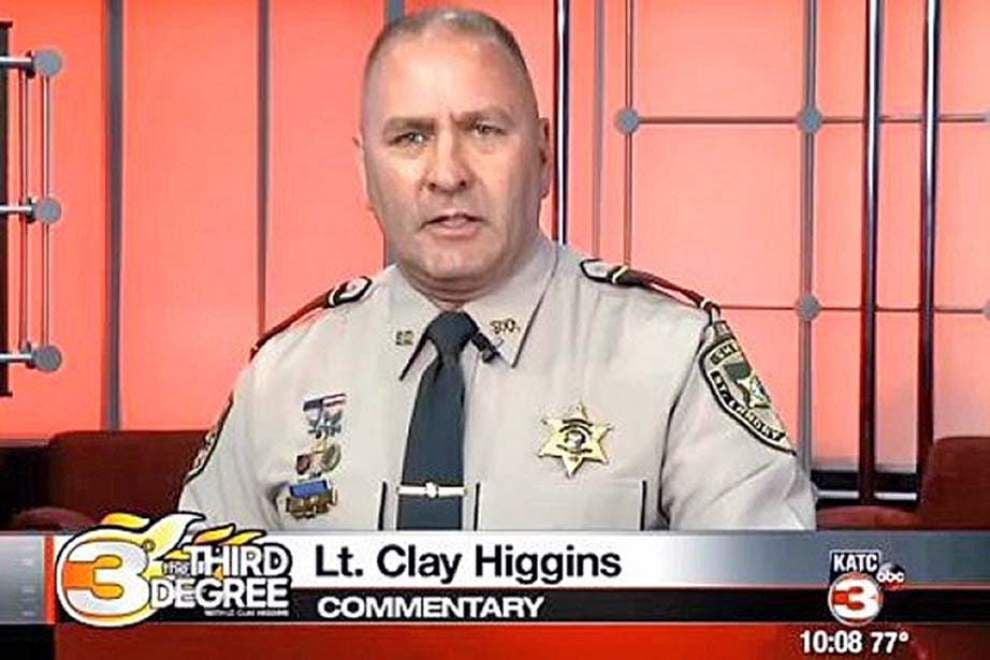 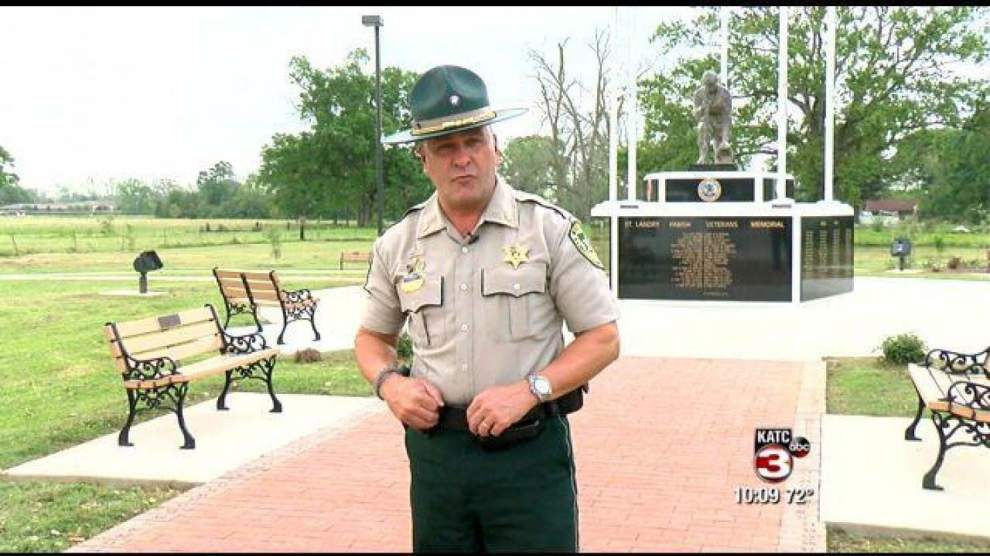 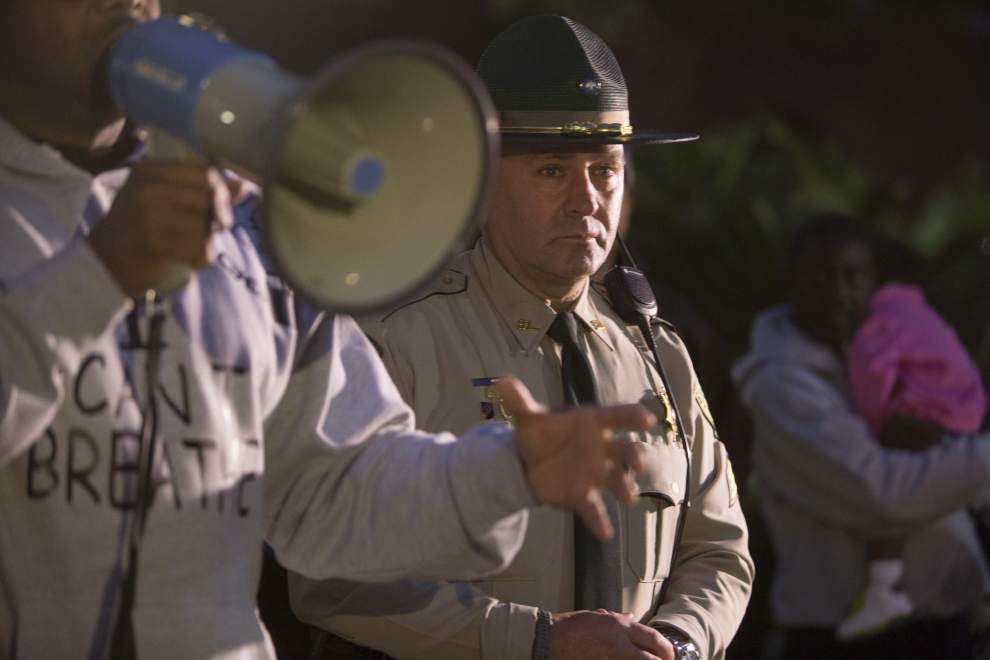 Advocate Photo by LEE CELANO -- St. Landry Sheriff Sgt. Clay Higgins looks on as then alderman-elect Tyrone Glover speaks during a demonstration in solidarity with police brutality protests nationwide on the courthouse steps in Opelousas on Dec. 18, 2014.

Advocate Photo by LEE CELANO -- St. Landry Sheriff Sgt. Clay Higgins looks on as then alderman-elect Tyrone Glover speaks during a demonstration in solidarity with police brutality protests nationwide on the courthouse steps in Opelousas on Dec. 18, 2014.

OPELOUSAS — Google “Clay Higgins” and the word “badass” appears more than once on the first page of results.

It’s the most-repeated two-syllable term used to describe Lt. Clay Higgins — spokesman for the St. Landry Parish Sheriff’s Office — who has captured the attention of TV viewers, YouTubers, reporters and accused criminals through his weekly and viral “Crime Stoppers” segments, which have catapulted him to the realm of local and Internet fame.

His eloquence and no-nonsense demeanor in the videos on Lafayette ABC affiliate KATC-TV, in which he discusses unsolved area crimes and advises the perpetrators of those crimes to surrender — “Have your affairs in order,” he often tells them — has gained national attention.

In an article published Wednesday, the Washington Post labeled him the “most irresistibly intimidating man in America,” calling the 53-year-old’s videos “terrifying for criminals” and dubbing him the “Cajun John Wayne.”

But though the title is catchy, Higgins said Friday — while outfitted in SWAT gear following an escaped inmate’s manhunt — it’s not really an accurate description of the man behind the badge.

“I like Cajuns, and I love John Wayne, but I’m neither one,” Higgins said. “I’m an Irish boy from New Orleans.”

Higgins was 6 years old and the second to youngest of eight children when his parents moved the family from New Orleans to Covington, where they raised and trained horses and were educated in St. Tammany Parish public schools.

“We were well read. My daddy insisted that we speak properly, use proper vocabulary and understand the principles of the English language, and how to use it and how to communicate properly and be a good listener,” Higgins recalled.

As an adult, Higgins worked for six years with the Military Police Corps, but he made a career out of managing car dealerships — lucrative roles that brought in six-figure incomes, “big houses and Cadillacs in the driveway.” Yet he remained unfulfilled.

In 2004, at age 42, he quit his job as manager of an Opelousas car dealership and began working as a reserve officer for the Opelousas Police Department — for $8 an hour.

“And I’m not a money-hater,” Higgins, a father of four, clarified. “I’m not anti-money. I’m a capitalist. And I believe in capitalism and freedom and free enterprise and the American way. But to participate in it at the expense of your soul is what I was doing.”

Higgins worked in Opelousas for four years before moving on to the Port Barre Police Department for three years and then to the Sheriff’s Office in 2011. Fast forward to October, when the woman who had been serving as public information officer was hastily reassigned following a suspicious, late-night car accident that didn’t lead to criminal charges but “caused some embarrassment,” Sheriff Bobby Guidroz said at the time.

Although Higgins said he felt his work as a night-shift patrolman was meaningful and made a true impact upon the people he encountered, including young children who as adults still call him “Uncle Clay” — he accepted the sheriff’s call. And he was uncertain about it.

“I wondered, ‘What is my meaning now? Why am I on this path? What will unfold?’ ” Higgins said.

What unfolded was unprecedented attention for Higgins and the Sheriff’s Office.

Some recommend he run for governor; others say he should run for president. Even some of those less sympathetic to law enforcement are swayed: “I don’t like cops but I kinda like him tho,” one commenter posted, and a few of the accused criminals Higgins has featured told authorities his segments persuaded them to surrender.

In October, Higgins and the Sheriff’s Office will be featured on an episode of the HBO news series “VICE,” which filmed in St. Landry Parish on Thursday and Friday. And KATC-TV is riding on Higgins’ popularity, giving him his own weekly segment that airs at 10 p.m. on Thursdays.

The first installment of “3rd Degree Commentary” aired last week and had been shared almost 700 times within hours of the news organization posting it to Facebook.

His first topic for the three-minute segment was the unrest in Baltimore following 25-year-old Freddie Gray’s death while in police custody.

And then he takes on his own, calling for rights-abusing police officers nationwide to “get another job.”

“If you’re one of the very few not prepared to stand by your sacred oath, then by all means turn in the badge,” he says. “Because a reckless cop has no place in our brotherhood.”

Perhaps his calling, Higgins said on Friday, is to use his new platform to not only encourage the accused to make things right, but also to positively influence other police officers to remember the foundational purpose of their duties.

“If there’s an officer on the fence about whether constitutional rights really need to be observed — if I could pull him back to the constitutional principles we are sworn to serve, maybe that’s my meaning,” Higgins said.

In the meantime, Higgins — who isn’t a TV-watcher and who had never touched social media until he became the Sheriff’s Office’s spokesman — said he’s been “frenetic” about the attention but is working to maintain peace in his home life.

He and his wife of eight years have “a happy home filled with laughter,” living quietly in Port Barre on modest means and with goals to buy a plot of land and a house.

“Now comes the part of accepting the path the Lord has prepared for me,” Higgins said. “But I’m not gonna let the noise of the world interfere with my stillness.”