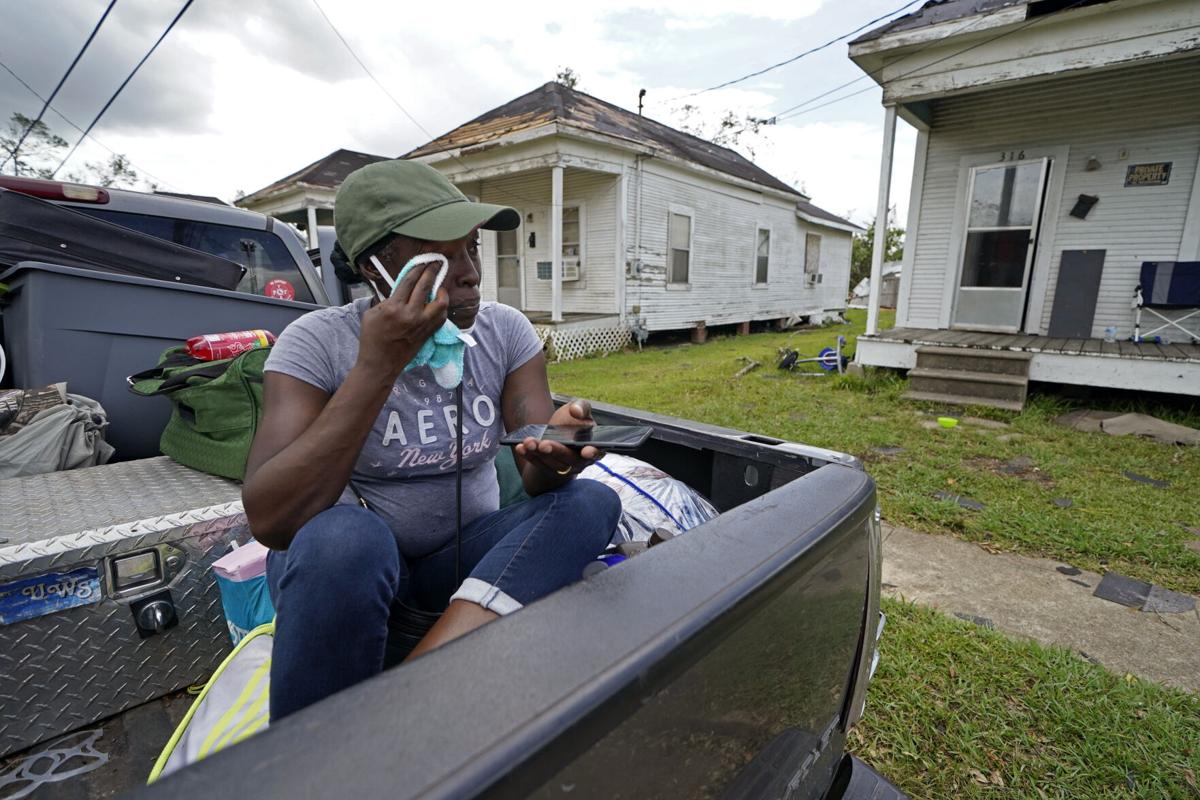 Linda Smoot, who evacuated from Hurricane Laura in a pickup truck with eight others, reacts as they return to see their homes, in Lake Charles, La., in the aftermath of the hurricane, Sunday, Aug. 30, 2020. (AP Photo/Gerald Herbert ORG XMIT: LAGH104 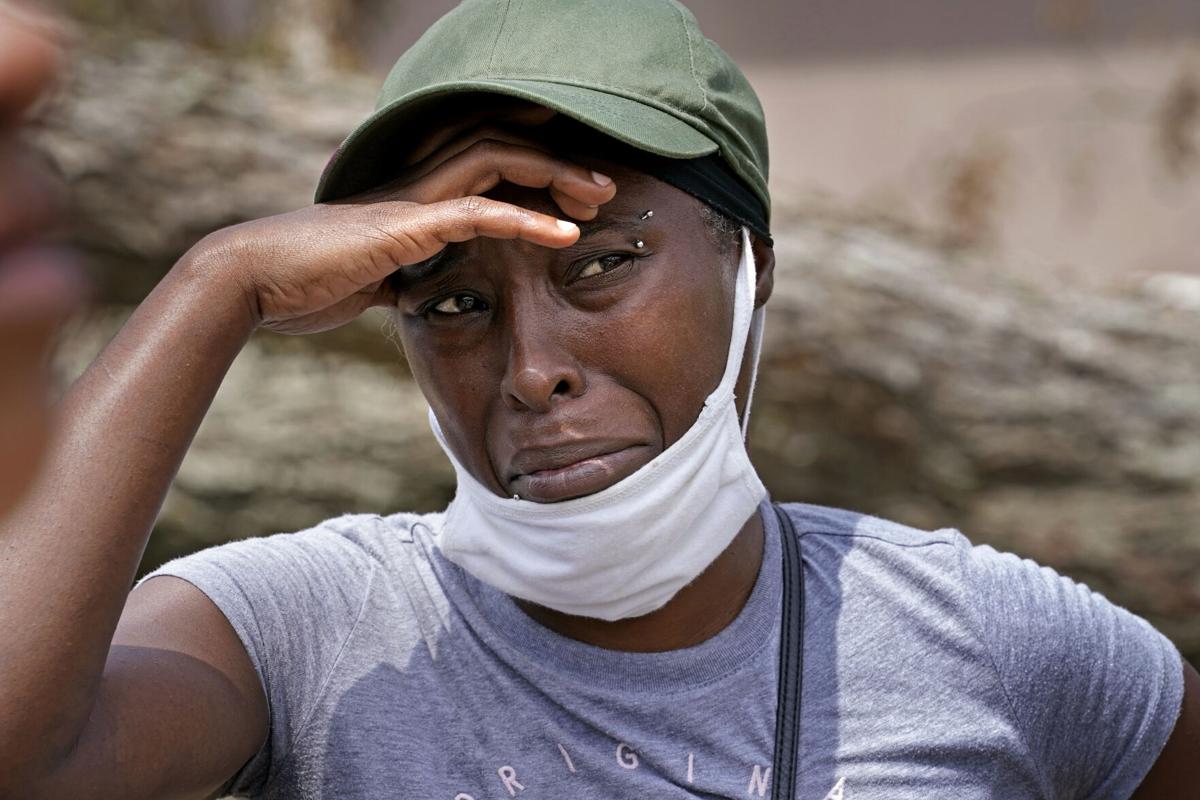 Linda Smoot, who evacuated from Hurricane Laura in a pickup truck with eight others, reacts as they return to see their homes, in Lake Charles, La., in the aftermath of the hurricane, Sunday, Aug. 30, 2020. (AP Photo/Gerald Herbert ORG XMIT: LAGH101 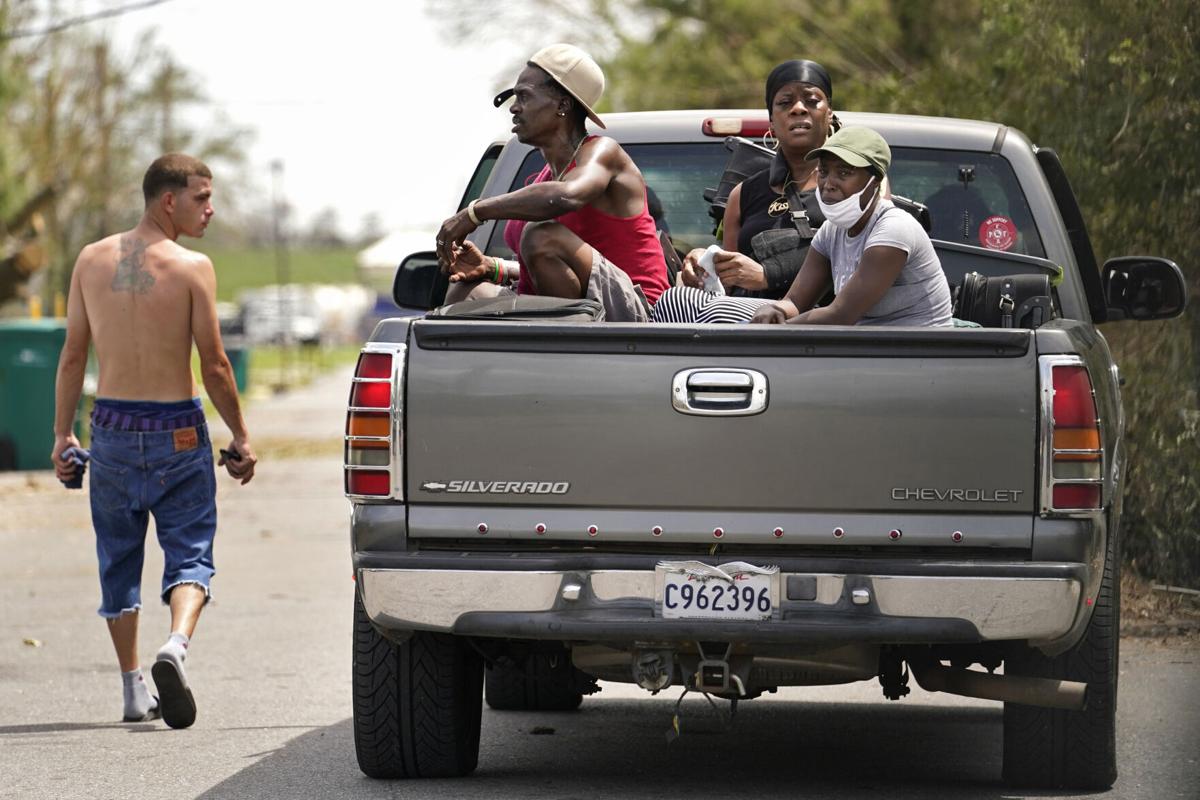 Linda Smoot, who evacuated from Hurricane Laura in a pickup truck with eight others, reacts as they return to see their homes, in Lake Charles, La., in the aftermath of the hurricane, Sunday, Aug. 30, 2020. (AP Photo/Gerald Herbert ORG XMIT: LAGH105

Linda Smoot, who evacuated from Hurricane Laura in a pickup truck with eight others, reacts as they return to see their homes, in Lake Charles, La., in the aftermath of the hurricane, Sunday, Aug. 30, 2020. (AP Photo/Gerald Herbert ORG XMIT: LAGH104

Linda Smoot, who evacuated from Hurricane Laura in a pickup truck with eight others, reacts as they return to see their homes, in Lake Charles, La., in the aftermath of the hurricane, Sunday, Aug. 30, 2020. (AP Photo/Gerald Herbert ORG XMIT: LAGH101

Linda Smoot, who evacuated from Hurricane Laura in a pickup truck with eight others, reacts as they return to see their homes, in Lake Charles, La., in the aftermath of the hurricane, Sunday, Aug. 30, 2020. (AP Photo/Gerald Herbert ORG XMIT: LAGH105

LAKE CHARLES  — In a matter of hours last week, Hurricane Laura tore through the tire shop Layla Winbush’s family started just under a year ago, reducing most of it to rubble and scattering hundreds of tires across the lot. The storm also damaged her home, which now reeks of mold.

Federal and state officials are now on the ground to help residents with home repairs and hotel stays. But Winbush said she feels alone, particularly after seeing a video of President Donald Trump, who visited the area Saturday, joking with Gulf Coast officials that they could sell copies of his signature for $10,000.

As evacuated Lake Charles residents began returning home, many worried that they wouldn’t have enough support from the both the federal and state governments as they face a rebuilding process certain to take several months, if not longer.

Louisiana Gov. John Bel Edwards on Sunday warned that residents were in for a long recovery.

“We’re going to be working really, really hard on the power outages, on the water systems, on the housing,” he said at a news conference. “But none of this is going to be easy. It’s not going to happen as quickly as most people would like for sure.”

Lafayette won't open Hurricane Laura shelter: 'Bad actors' will use our hospitality against us

Lafayette was spared the worst of Hurricane Laura, but the city's leadership doesn't plan to open an emergency shelter anytime soon for those …

Crews were starting to take chain saws to fallen trees and patch roofs, but most homes in Lake Charles wrecked by the storm were still untouched. The Category 4 hurricane, which made landfall Thursday just south of Lake Charles near Cameron, Louisiana, before abating nearly 12 hours later, packed 150-mph (240-kph) winds and a storm surge that officials said was as high as 15 feet (4.5 meters) in some areas.

So far 18 deaths in Texas and Louisiana have been attributed to the storm; more than half of those people were killed by carbon monoxide poisoning from the unsafe operation of generators.

The Federal Emergency Management Agency sent hundreds of workers to the region to help with search and rescue and other efforts. As of Sunday, more than 52,500 people had applied for FEMA assistance, and the agency had conducted over 200 home inspections and distributed more than $650,000 in assistance, said Tony Robinson, FEMA’s administrator for the region. The Louisiana National Guard, meanwhile, had handed out hundreds of thousands of bottles of water and meals and about 14,000 tarps, the governor said.

But the needs were substantial. In hard-hit Calcasieu Parish, some waited hours in line for tarps, water and other supplies at distribution sites, said parish spokesperson Tom Hoefer. The entire parish had been without power, and in many areas, including the parish seat of Lake Charles that’s home to more than 78,000 people, water had not been flowing from taps, he said. Several residents Sunday said the water supply was still intermittent.

Crews will have to rebuild hundreds of transmission towers along with resetting downed power poles and lines, clearing debris and assessing damage, said Scott Aaronson, vice president of security and preparedness for the Edison Electric Institute, the association of investor-owned electric companies in the U.S. The association said roughly 409,000 customers were still without power late Sunday as a result of the storm.

Insured losses to properties in the U.S. will be near $9 billion, according to projections from a Boston-based disaster modeling firm. That includes wind and storm surge damage to residential, commercial and industrial properties and automobiles, Karen Clark & Co. said. There were an estimated $200 million in insured losses in the Caribbean, the company estimates.

In Lake Charles, many people in were still staying outside town. But James Townley said he would remain in his home, as he did during the storm.

The front of his trailer had been blown away, leaving a single toilet exposed to the elements.

Townley lay on a sofa in front of a fan — connected to a neighbor’s generator — circulating hot, humid air. The 56-year-old’s shirt was off, revealing scars from the open-heart surgery he had several years ago. He said he was out of medication for his heart and kidneys and had requested aid from FEMA — but not heard back.

One silver pickup truck winding through Lake Charles’ streets carried four generations of a single family — six people inside the cab and three riding on the flatbed along with suitcases and bags filled with belongings. The family was visiting the homes where they each lived for the first time since the storm, assessing what they had lost and what had been spared.

Yes, your phone buzzed with plenty of tornado warnings before Laura. Why? 'Better safe than sorry'

In September 2005, the potent storm bands swirling around Hurricane Rita spawned 55 tornadoes in 36 hours in Jackson, Mississippi, and parts o…

Driving the pickup was 53-year-old Patricia Mingo Lavergne. She was worried about how her home had fared, but also where everyone would sleep Sunday night.

When Lavergne parked outside the house she shares with her husband, a duplex just north of the train tracks bisecting the city, several family members began to pray and wipe away tears.

The pecan tree that long shaded her front yard had cracked and fallen in front of the front door. Insulation had burst through the ceiling and fallen in tufts over one bedroom. In another room, she pulled out two drawers filled with neatly folded clothes saved for her daughter’s child, due in January. She wiped a mix of sweat and tears with her shirt.

Eventually, everyone in the family was able to find a place to stay. They have requested help from FEMA, but Lavergne said she didn’t have a checking account in which to receive federal money.

For this Louisiana family, Hurricane Laura is the third time a storm has hit them hard

“It’s frustrating,” she said. “I’ve already been going through a lot and this is a lot more on my shoulders.”

Winbush, 19, and her family were staying with relatives in Beaumont, Texas, over an hour’s drive away. Her mother, Monique Benjamin, stood with Winbush and two of her siblings in front of what was left of the tire shop.

Benjamin and Winbush stayed cheerful as they described all the services the shop offered and the successes they had building it. The business is insured.

“Even though we may cry in the restroom and wipe our faces later, we got to stay strong,” Benjamin said.

Hurricane Laura's storm surge may have washed away 595 head of cattle into the Gulf of Mexico.