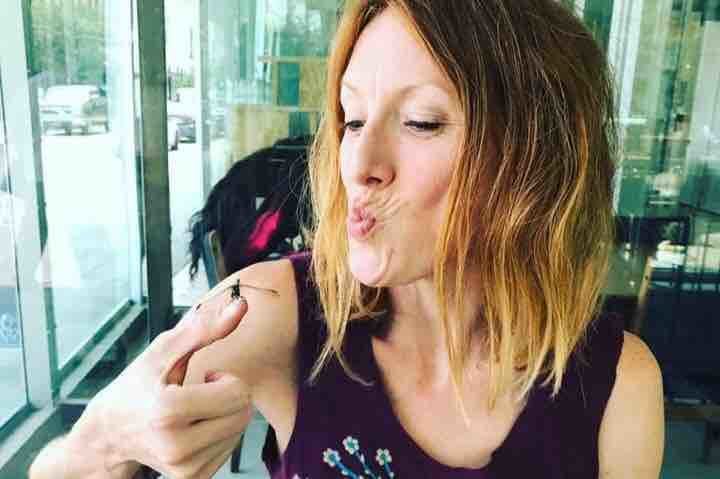 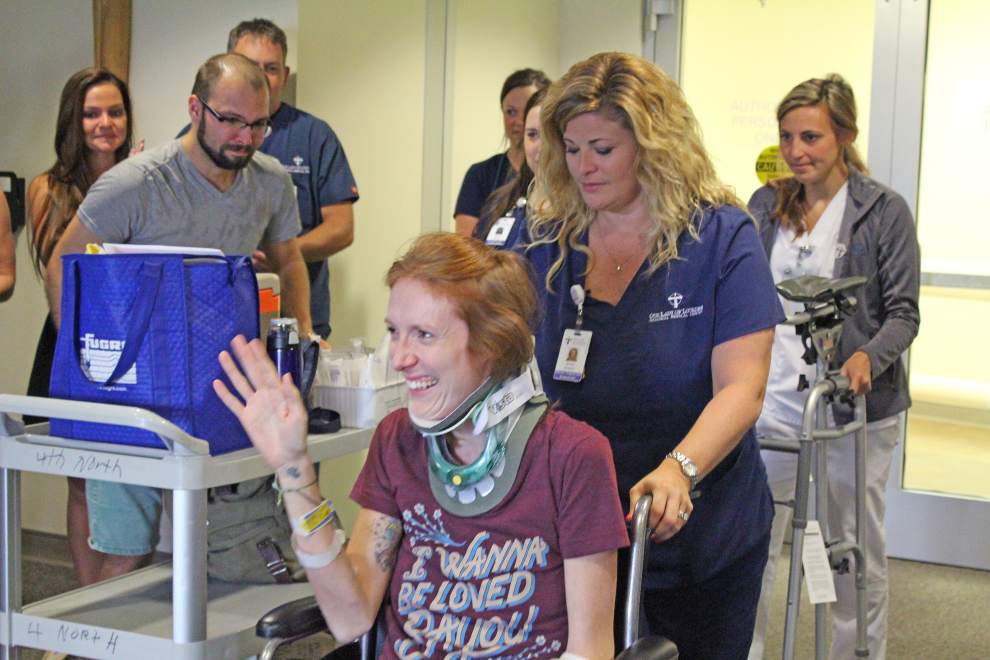 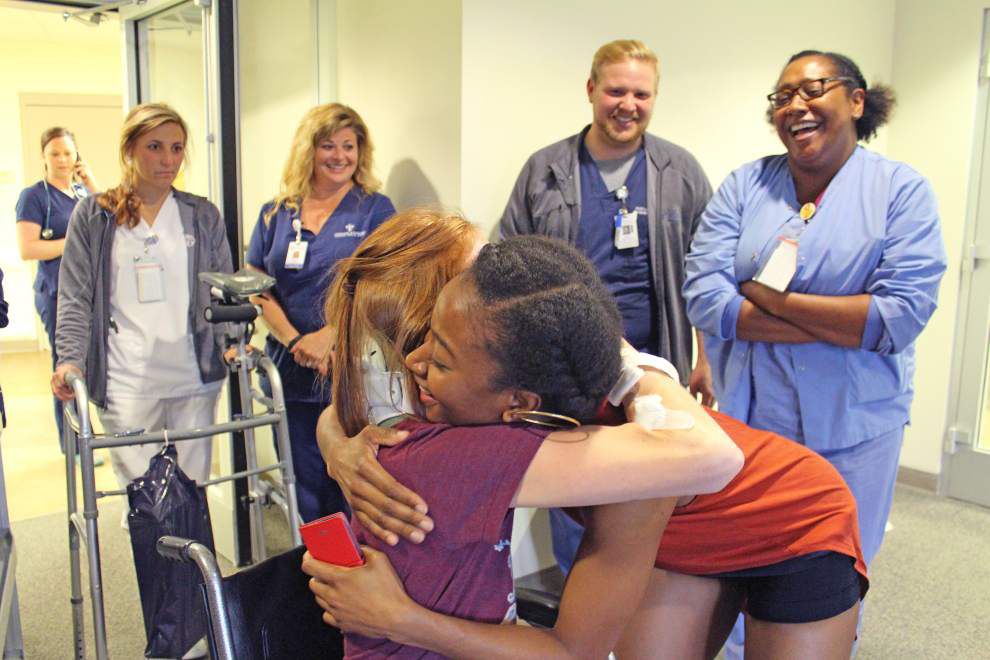 Photo provided by Our Lady of Lourdes RMC-- Lourdes nurse, Racquel Killion hurried to the hospital on her day off for one last hug from patient, Morgan Egedahl. 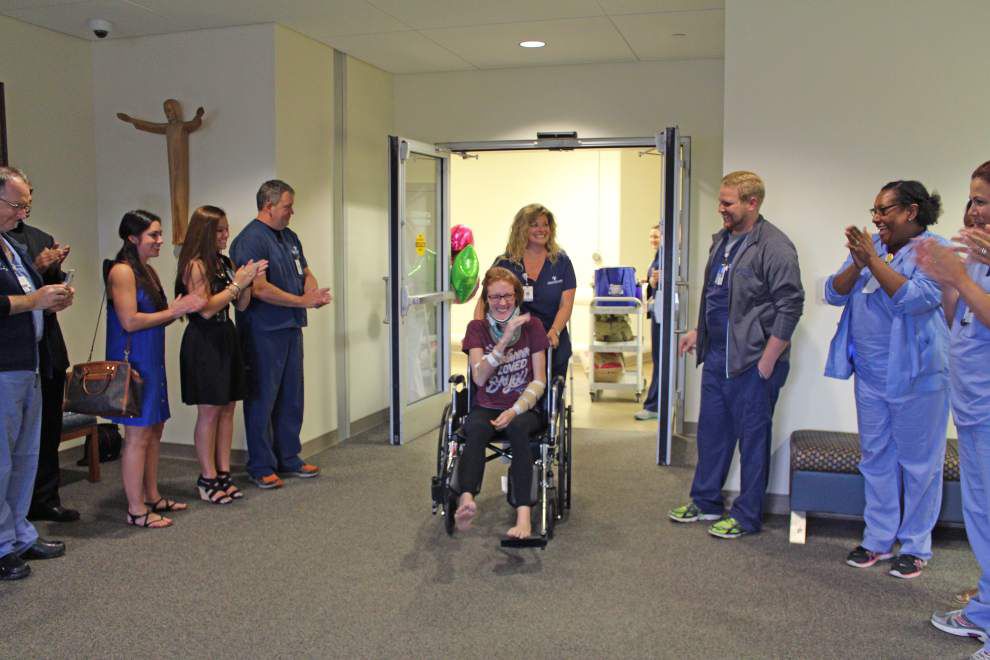 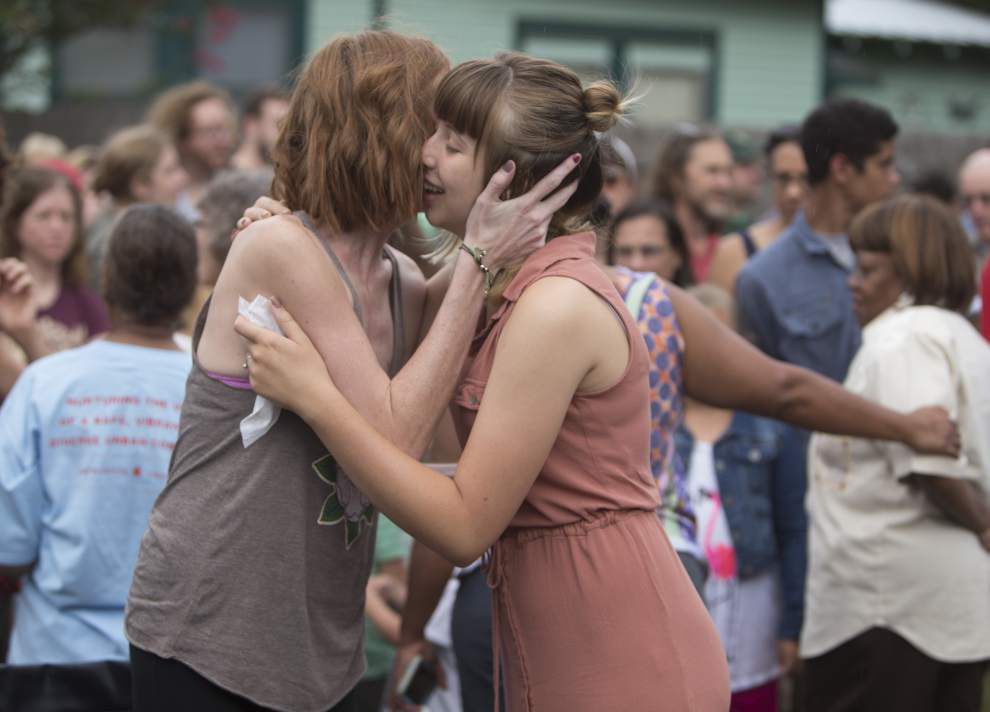 Advocate Photo by LEE CELANO - Morgan Egedahl (L), who was wounded in the Grand Theater shooting where Jillian Johnson was shot to death, greets Johnson's stepdaughter, Paxton Brown, during a groundbreaking ceremony for the Victory Garden, in memory of Johnson Sunday, Sept. 27, 2015. 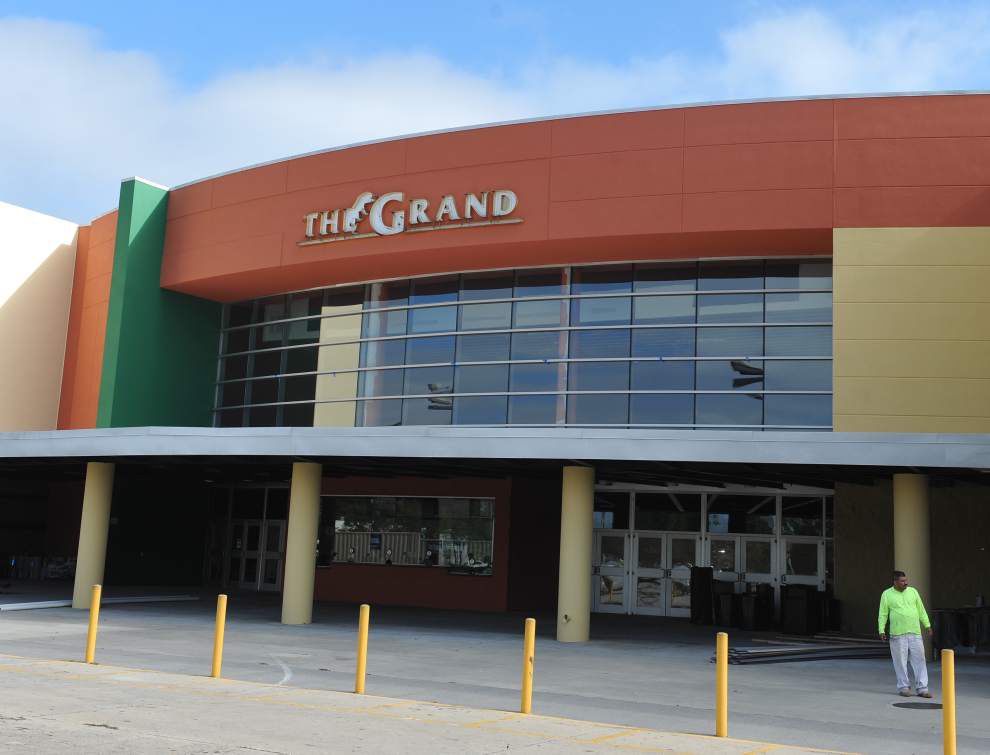 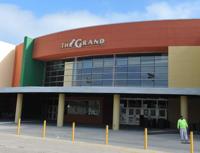 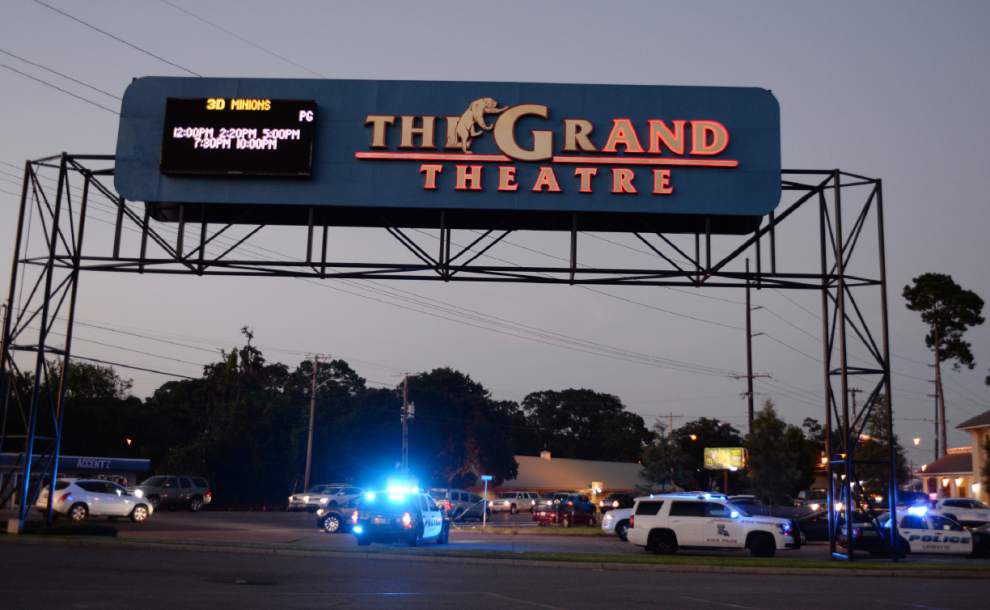 Law enforcement and other emergency personnel respond to the scene of a shooting at the Grand Theatre on Thursday, July 23, 2015, in Lafayette, La. (Leslie Westbrook/The Advocate via AP) 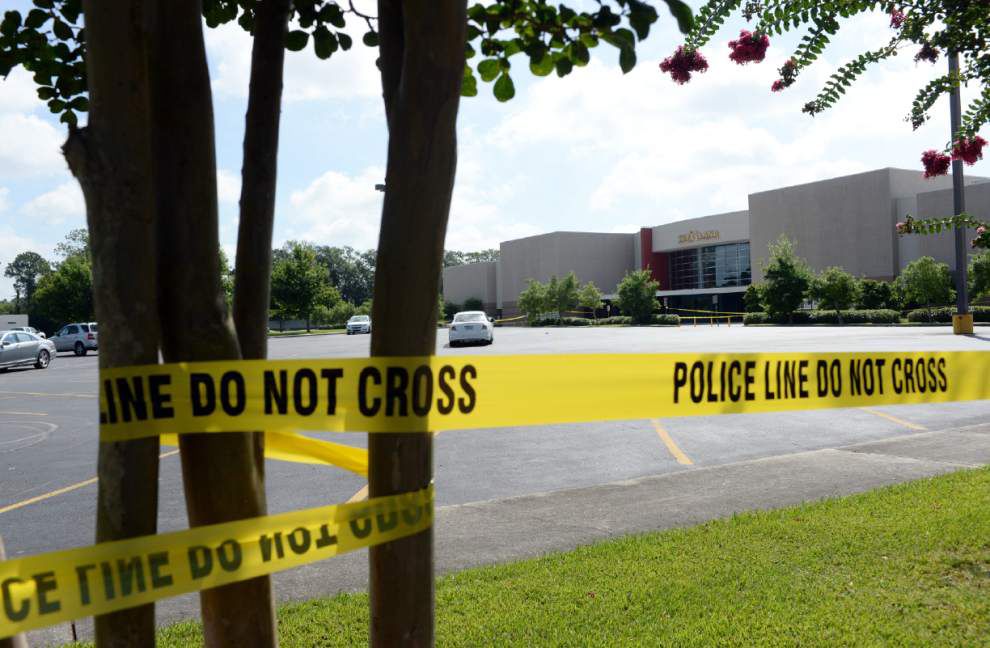 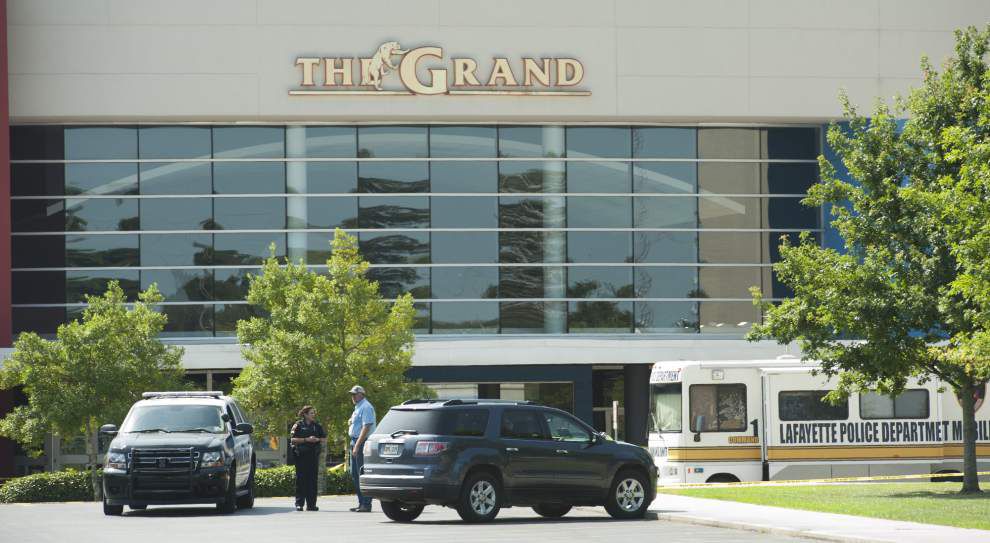 Advocate Photo by BRAD KEMP One of the remaining cars is picked up from the Grand Theater parking lot Saturday July 25, 2015 after last thursdays shooting in Lafayette, La.

Photo provided by Our Lady of Lourdes RMC-- Lourdes nurse, Racquel Killion hurried to the hospital on her day off for one last hug from patient, Morgan Egedahl.

Advocate Photo by LEE CELANO - Morgan Egedahl (L), who was wounded in the Grand Theater shooting where Jillian Johnson was shot to death, greets Johnson's stepdaughter, Paxton Brown, during a groundbreaking ceremony for the Victory Garden, in memory of Johnson Sunday, Sept. 27, 2015.

Law enforcement and other emergency personnel respond to the scene of a shooting at the Grand Theatre on Thursday, July 23, 2015, in Lafayette, La. (Leslie Westbrook/The Advocate via AP)

Advocate Photo by BRAD KEMP One of the remaining cars is picked up from the Grand Theater parking lot Saturday July 25, 2015 after last thursdays shooting in Lafayette, La.

The triggers are everywhere: Lights turning on, a dish crashing to the floor.

They happen all day, every day, bringing Morgan Egedahl back to July 23, 2015, when dinner and a movie with her best friend ended with a mass shooting in the Grand Theatre on Johnston Street in Lafayette.

“Every day is hard,” she said Saturday, nearly four years since the shooting that broke her body and mind and took her best friend, Jillian Johnson.

All day there are flashbacks, nerve pain, hallucinations.

It’s gotten worse, in part because of her own expectations.

Lafayette’s Grand Theatre on Johnston Street is expected to remain a closed crime scene until at least Monday, as police this weekend evaluate…

For weeks, sometimes months, Egedahl goes through what she calls an energetic period, where she’s high-functioning, able to work as a high intensity interval training coach and take care of her children. Then the flashbacks, anxiety, PTSD take over her mind and body. She has panic attacks, can’t work, can’t pick her children up from school, can’t leave the house.

“My body and brain take over and I’m trapped,” she said.

The problem is only getting worse, Egedahl wrote on a GoFundMe page.

"I have spent hours in therapy and with psychiatrists, only to realize that my mental health is degrading and something more must be done. My high points are now barely functioning, and my low points are completely terrifying."

Egedahl says she feels a responsibility to help educate the public "on what PTSD really looks like, how it can hide in plain sight, and how damaging and detrimental the effects of gun violence can be," she wrote. "Years can pass and the survivor may still live the day in question 100 times over or more. I do.

"Someone may look and act as though everything is just fine, and they are crumbling on the inside. This is what trying to survive looks like."

Egedahl met Jillian Johnson when they were 9 years old, living in Nashville, Tennessee. They latched on to one another and became best friends. It was Johnson who convinced Egedahl to move to Lafayette after a 2005 visit for Mardi Gras.

The women, who hadn’t seen each other in a couple of weeks, met for dinner that evening after work to catch up. Neither one went to the movie theater much and debated whether to stay at the restaurant talking or go to The Grand to see the latest Amy Schumer film, “Trainwreck.”

They arrived about 10 minutes late. About 10-15 minutes later, Egedahl heard a popping sound. She thought it was kids with firecrackers or poppers.

“I remember emotionally rolling my eyes,” Egedahl said. “Then I felt the first bullet hit me and I went down to the floor. Jill was next to me.”

John Russell Houser of Alabama, seated two rows behind them, opened fire, killing Mayci Breaux and injuring her boyfriend, then went after Egedahl and Johnson.

Egedahl remembers Houser standing over her as she lay on the theater floor. She raised an arm to protect herself and he shot her through her arm.

“He continued shooting me as I crawled away,” she recalled.

Houser shot others as he made his way through the theater. He tried to leave the building, but police were arriving. When he re-entered the theater he again came upon Egedahl, shooting her one last time, the bullet striking and breaking her neck. Then he shot and killed himself.

Egedahl credits John Michael Gott, one of the theater’s managers, for keeping her alive until medics arrived. He applied pressure to her wounds and kept her from blacking out.

“I never lost consciousness,” she said. “You don’t just black out and wake up days later. I saw it all. I heard it all.”

She recalls seeing Johnson on the theater floor, a police officer next to her, talking to her. She recalls the pain from her crushed femur when medics lifted her onto a stretcher. She remembers seeing Johnson on a stretcher outside by an ambulance, a police officer giving her CPR. She remembers her own difficulty breathing, the pain, grabbing people in the emergency room, begging them to keep her alive.

Twenty-three days later, Egedahl left Our Lady of Lourdes Regional Medical Center, the last of the survivors of the Grand 16 Theatre shooting to be released.

Weeks later, she discovered by counting the bullet holes in her body that Houser had shot her seven times, in the neck, through the chest puncturing a lung, in her left arm and both legs, severing her right femur, and three times in the torso, injuring a lung, liver, spleen, colon and kidney.

"I can no longer function"

Egedahl was anxious to move past the tragic event. She underwent intense physical therapy and emotional therapy, as well. Four months after the shooting, walking with a cane, she returned to her job at Red’s health club, a few doors from the Grand Theatre.

“I jumped into recovery quickly,” she said. “I wanted to normalize it.”

Things have never returned to normal. Egedahl quit her job at Red’s because she couldn’t bear driving past the theater every day. She moved to Baton Rouge and rarely returns to Lafayette.

“Everything reminds me of Jill,” she said.

Egedahl has spent nearly four years in various mental health treatments to help her deal with the aftermath of the shooting. Monday she enters an intense 8-week program, “my last resort for my mental health,” she said.

She doesn’t have the money to pay for the treatment and found out Friday her insurance won’t cover it. Egedahl set up a GoFundMe account, hoping to cover some of the cost. By Sunday afternoon, people had donated more than $17,000 toward her $20,000 goal. Anything over what she needs will be donated to Gun Violence Survivors Foundation, she said.

"There was no settlement. There was no insurance money doled out to survivors," she wrote on the GoFundMe page. "I have struggled to work full-time for three years, and unfortunately can't call in sick with dissociative seizures, anxiety and crippling depression.

"I am at my wit's end. I can no longer function normally on a daily basis."

Egedahl knows the treatment program won't return her life to the way it was before July 23, 2015. What she hopes to get out of the program is longer periods where she can function with more energy and a positive outlook, fewer low periods, less emotional reaction to triggers, the ability to deal with memories and emotions in a healthy way and the ability to take care of her children.

She has a good support system, Egedahl said, but it’s not enough.

“They weren’t there. They didn’t go through it.”

Egedahl met with other survivors of The Grand Theatre shooting, but either they weren’t injured or didn’t lose a loved one like she did.

There needs to be a network of people who have been through the same thing who can respond quickly and support people like herself when they experience these shootings, she said.

“It’s completely lonely when you’re in this and you don’t have contact with anyone else who’s been through it.”

And there are hundreds of people like her who have survived mass shootings in this country, Egedahl said.

In 10 days, Lafayette will see 'everything has changed' in reopening of Grand 16 Theatre after July mass shooting

The Grand 16 Theatre in Lafayette will reopen Nov. 19 after almost four months of cleanup and renovation following the mass shooting there tha…

She didn’t want to talk in detail about her views on guns, saying only “the more restrictions the better.” But places where more than 100 people gather at a time should at least have bag checks or metal detectors, Egedahl said.

“I don’t want to live in a police state,” she said. “It disgusts me that two women were killed” and nothing changed … "If you’re not making those changes you’re disrespecting the women who were killed.”

People everywhere need to get to know their neighbors, she said. Pay attention, look for signs that someone needs mental help and get them help before they hurt themselves or someone else, she said.

“I would love people to understand PTSD and trauma in general can be happening and a person can look fine and the next day they’re gone,” Egedahl said.

The outpouring of support from Lafayette and Acadiana in the immediate aftermath of the shooting was phenomenal and Egedahl said the donations helped so much with her recovery. But for some survivors, like herself, it’s not over.

The agony and the ecstasy: Using the 'party drug' MDMA to combat PTSD