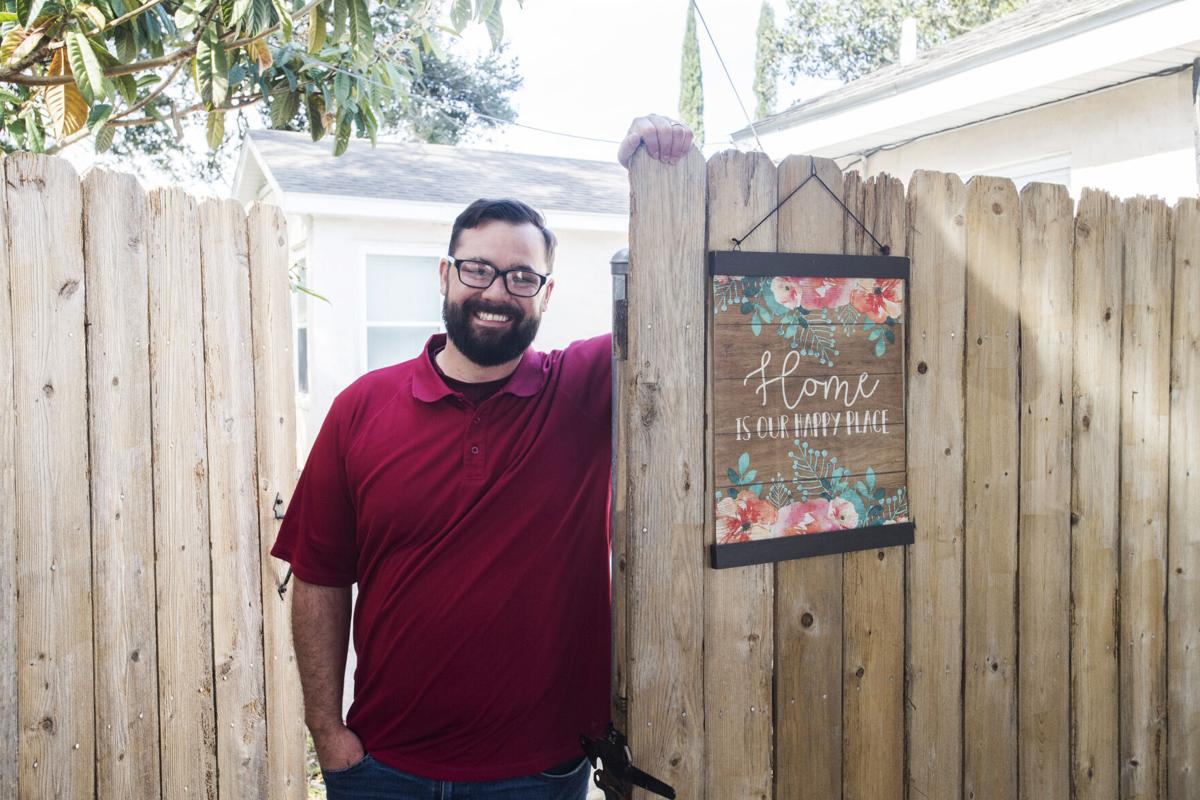 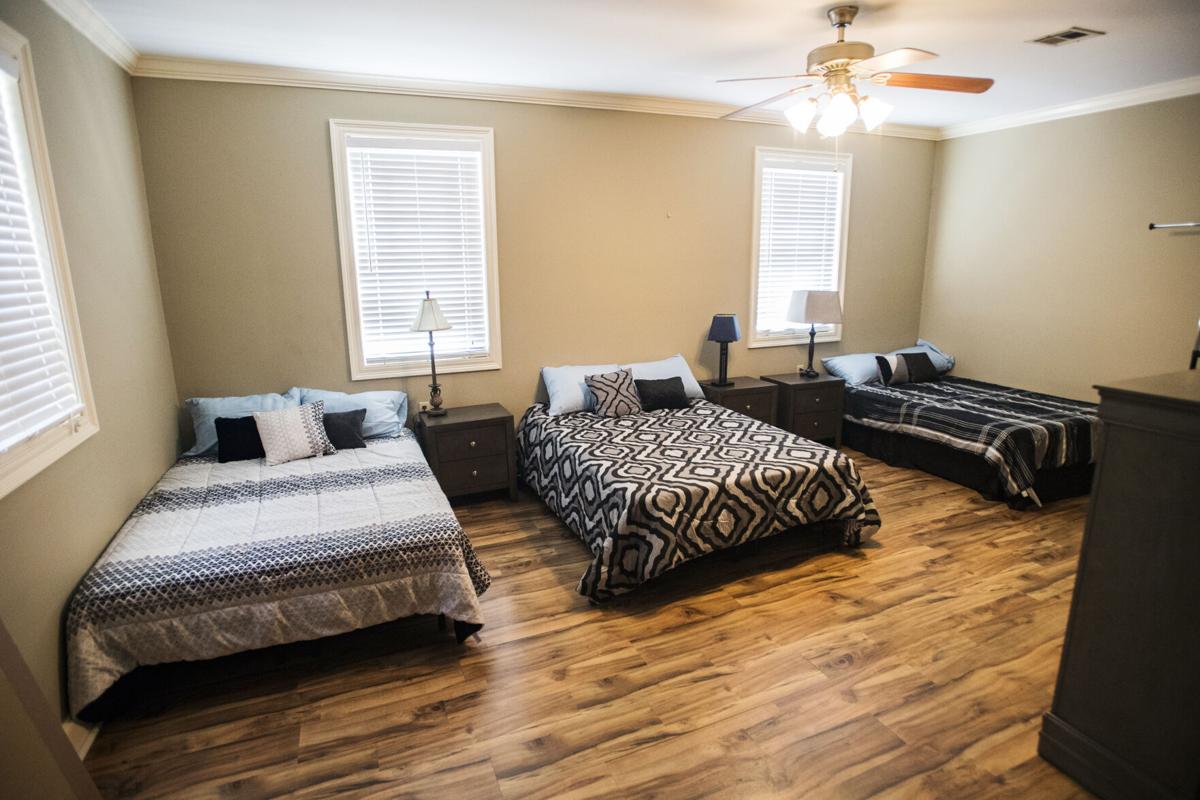 One of the bedrooms in the first transitional, sober-living home opened by the non-profit organization Safehouse is pictured Wednesday, February 3, 2021, in Lafayette, La. 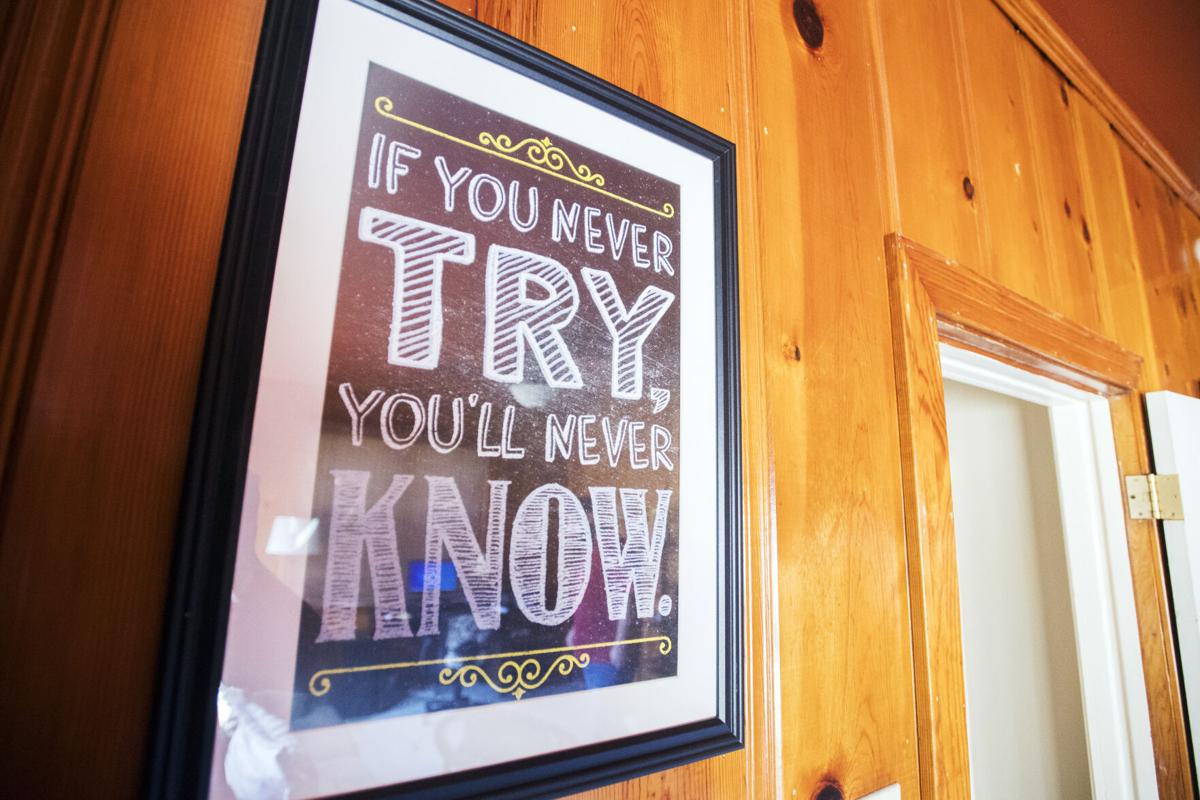 An inspirational sign is displayed at the first transitional, sober-living home opened by the non-profit organization Safehouse Wednesday, February 3, 2021, in Lafayette, La. 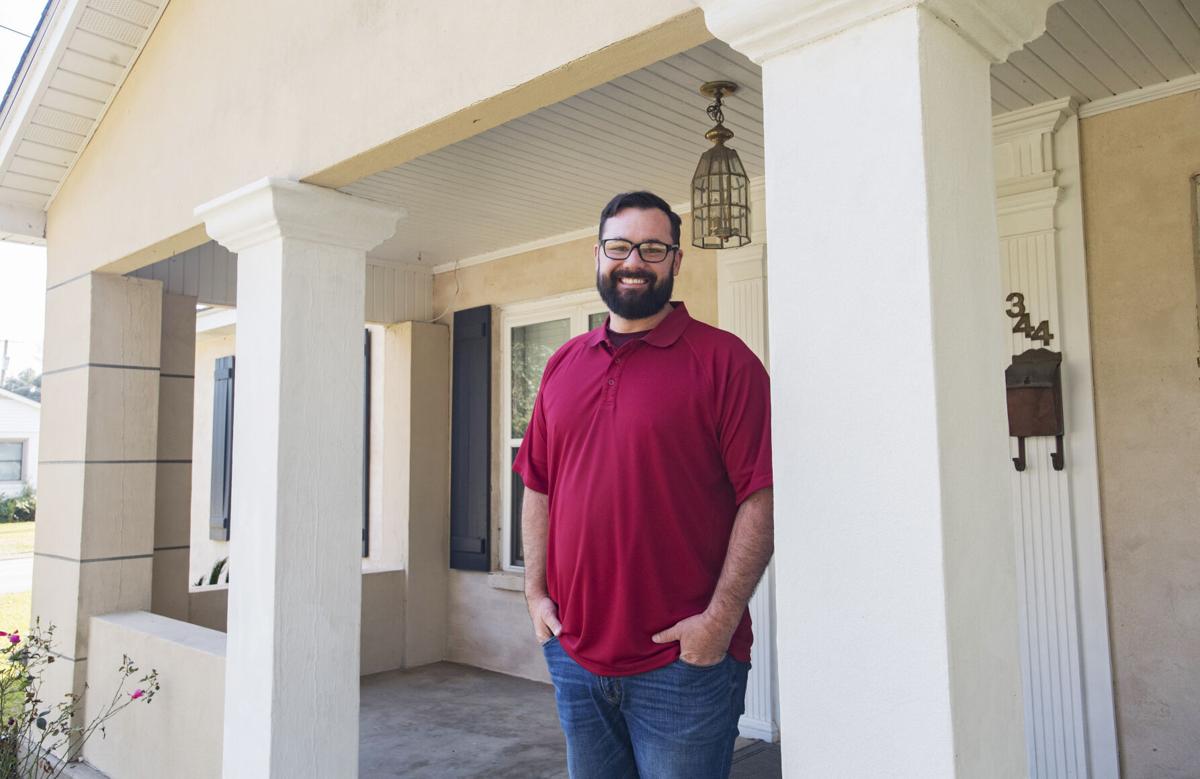 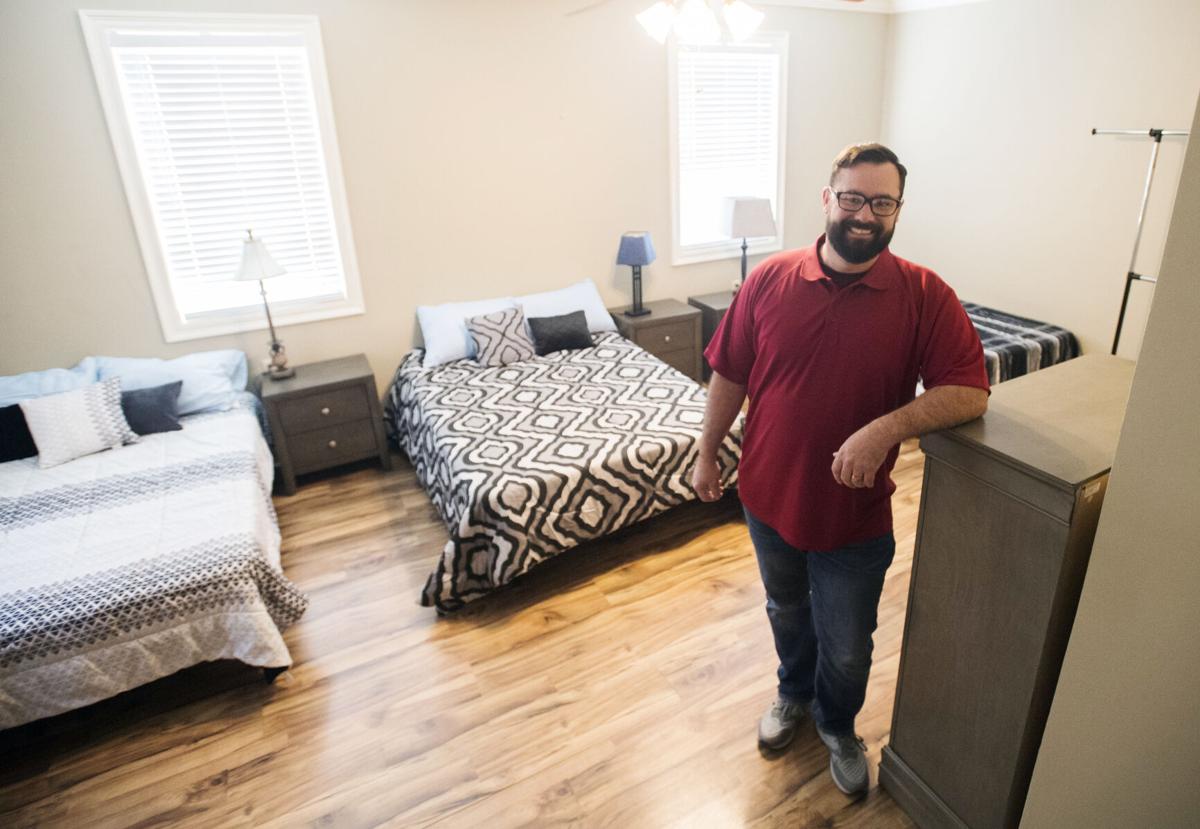 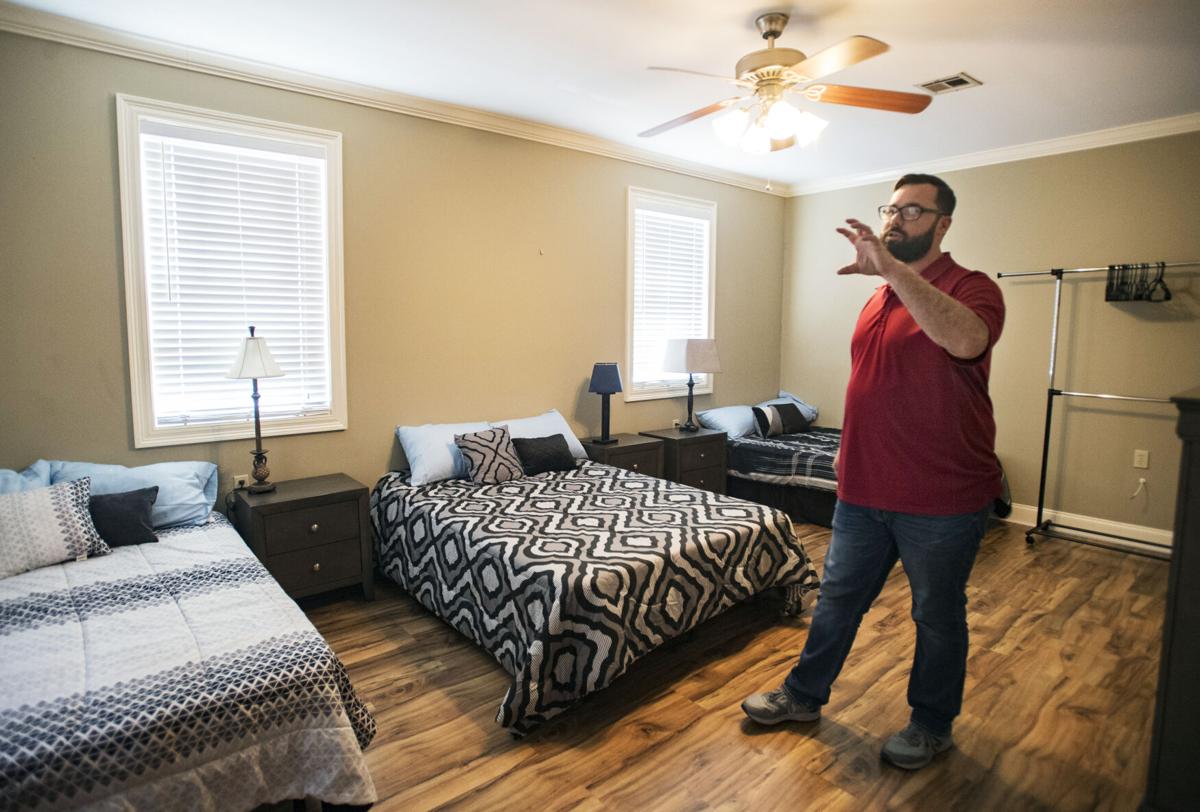 One of the bedrooms in the first transitional, sober-living home opened by the non-profit organization Safehouse is pictured Wednesday, February 3, 2021, in Lafayette, La.

An inspirational sign is displayed at the first transitional, sober-living home opened by the non-profit organization Safehouse Wednesday, February 3, 2021, in Lafayette, La.

A Lafayette faith-based nonprofit is providing men in Acadiana a support system to successfully tackle addiction recovery with the opening of a new sober living house on Charlotte Street.

The roughly 2,500 square foot three bedroom, two bathroom home at 344 Charlotte St. will house up to seven men in recovery from addiction as they transition back into their communities, whether from jail, an in-patient treatment facility or potentially homelessness, Safehouse Executive Director John Nugent said. The house officially opened in late January.

Support, accountability and community are critical to the success of people working through recovery. Safehouse, a nonprofit focused on ministry and addiction recovery, noticed there was a support gap for people exiting treatment or prison while offering recovery meetings at those facilities. People exiting were returning to the same settings with the same people, and eventually they were falling into the same destructive behavior, Nugent said.

They needed help to be successful.

“I’d wager to say almost everybody knows somebody who struggles with addiction and if that were our brother, our husband, our son, our daughter, we would want something like this for them,” he said.

The sober living house is built around the S.A.F.E. method, which focuses on the pillars of sobriety, activism, financial health and education, Nugent said.

Louisiana’s network of 211 call centers saw a 220% increase in call volume last year, a unique illustration of the need for information and se…

Residents will focus on their sobriety through required weekly Celebrate Recovery meetings and independent meetings with outside organizations, coupled with lessons on maintaining positivity and healthy thoughts. Celebrate Recovery is a Christ-centered, 12-step recovery program for people battling addiction and other struggles, such as trauma. It was developed in 1991 by Saddleback Church in Lake Forest, California.

The activism portion will focus on service, first toward housemates and then service toward neighbors and larger communities in Lafayette, he said.

The financial security piece will focus on budgeting strategies and basic financial literacy, coupled with employment assistance. Nugent said Safehouse has coordinated with area staffing agencies and the goal is to have any resident entering the home without a job employed within two weeks. The Charlotte Street home is a couple blocks from a bus stop on West Congress Street, easing transportation access to work and interviews for men who may not have their own vehicles, Nugent said.

Finally, the education tenet will focus on coaching men to earn their GED if they don’t have a high school diploma or equivalent, or point them toward career certification classes in various trades of skills-based jobs to secure them better career pathways.

“A guy coming out of our house who is successful would be someone who can easily identify his next step and then figure out what to do to take that step,” the executive director said.

Nugent struggled with addiction for most of his life and said it’s a surreal opportunity to be in a position to help others on their paths to recovery. The Safehouse leader said he’s been sober for more than four years; he said he found Christ while serving a stint in jail, and emerged from incarceration committed to sobriety, self-improvement and service. Even so, it’s hard to comprehend he’s made it.

Wintry forecast forces scramble to shelter homeless in Acadiana: 'No one should be sleeping outside'

Chances were mounting late this week that Louisiana’s Gulf Coast will face cold weather and possible rain this weekend, with threats of ice, s…

“I’m standing around and I look around me and I’m watching all of my dreams come true. It’s so gratifying and humbling. I can’t even put it into words except that I’m watching everything happen and I know the best is yet to come,” Nugent said.

The idea for the addiction and recovery focused nonprofit came from Landmark Church Pastor Rick Langford, who shifted the focus of his church and ministry work to hands-on service beginning in 2012. Langford said he and his wife had an epiphany while attending a faith conference and decided to radically shift the church’s approach to living the Gospel. Before then, Landmark had too much of a “country club” feeling, he said, and was focused more on serving “church people” and the structure of church life than serving as disciples.

The church’s team mapped a three-mile radius around their 1610 West Willow St. facility and began working in local neighborhoods, first serving meals, then shifting their approach as they heard about local needs. Many of the people they built relationships with struggled with addiction. The fellowship was eye opening, Langford said.

“I’ve learned more from alcoholics and drug addicts about community than I ever learned from the church, and I learned that the church had kind of failed in that regard because we’d become cliquish in a way I call navel gazing. Wow, have I learned so much,” he said.

Lafayette and the surrounding area did not have a Christ-centered, 12-step program, so Safehouse began working with the Lafayette Parish Correctional Center and regional treatment centers to offer Celebrate Recovery meetings at their facilities. Langford said the attractive thing about Celebrate Recovery meetings is that they’re not focused solely on addiction and can be applied to any struggle or healing from trauma. The pastor said he attends meetings to work through anxiety.

Opioid-related overdose deaths continue to rise in Lafayette Parish, and fentanyl a big reason why

Brycen Stubbs first witnessed a fatal overdose was when he was only 22 years old.

From there, the group brainstormed about opening a sober living facility as a transitional space for addicts returning to society. They’d never pursued such an ambitious project, Langford said, but decided — why not us? The dream was turned over to Nugent and a core team of five others, with additional volunteers, and the pastor said he’s enjoyed being along for the ride.

Nugent said Safehouse’s goal is to expand to offer more sober living homes, including homes for women. He said their aim is to open a second home once the Charlotte Street residence is consistently at full capacity, to prevent crowding and meet the need in the area. Safehouse is aiming to expand their fundraising capability in the meantime; residents pay $150 in rent per week, but Safehouse doesn’t want to rely on those funds, because “it’s hard to help somebody when you’re hard up yourself,” he said.

When opening Safehouse’s next sober living home, Nugent said he’d do a couple things differently. Namely: Introduce himself, the home and Safehouse’s mission to neighbors before moving in a single piece of furniture. The director said he went door-to-door on their street with business cards, fliers and a desire to chat after setting up the home, but by then word had spread through the neighborhood and created a bit of a dust up.

Many neighbors have been welcoming and supportive, but some have been apprehensive or skeptical about having recovering addicts living nearby. Nugent said he understands the concerns.

Prospective residents apply and are interviewed before being accepted into the facility. Residents will be required to pass an initial drug test and will have to pass randomized tests throughout their stay. Anyone who fails must vacate within an hour, he said. There’s also a no tolerance policy for disturbing the peace or other offenses, to ensure the living environment remains safe both for residents and neighbors.

Nugent said he respects neighbors’ feelings and encourages neighbors with questions or interests in the sober living home’s policies to contact Safehouse.

“I understand there are concerns, and let’s talk about them. I even invite you that if you have them, please put them in writing and email them to me and we can put those in some of our policies. The main thing is keeping the lines of communication open. We don’t want to come in and disregard all of your feelings. We care about everybody, not only the people we’re trying to help,” Nugent said.