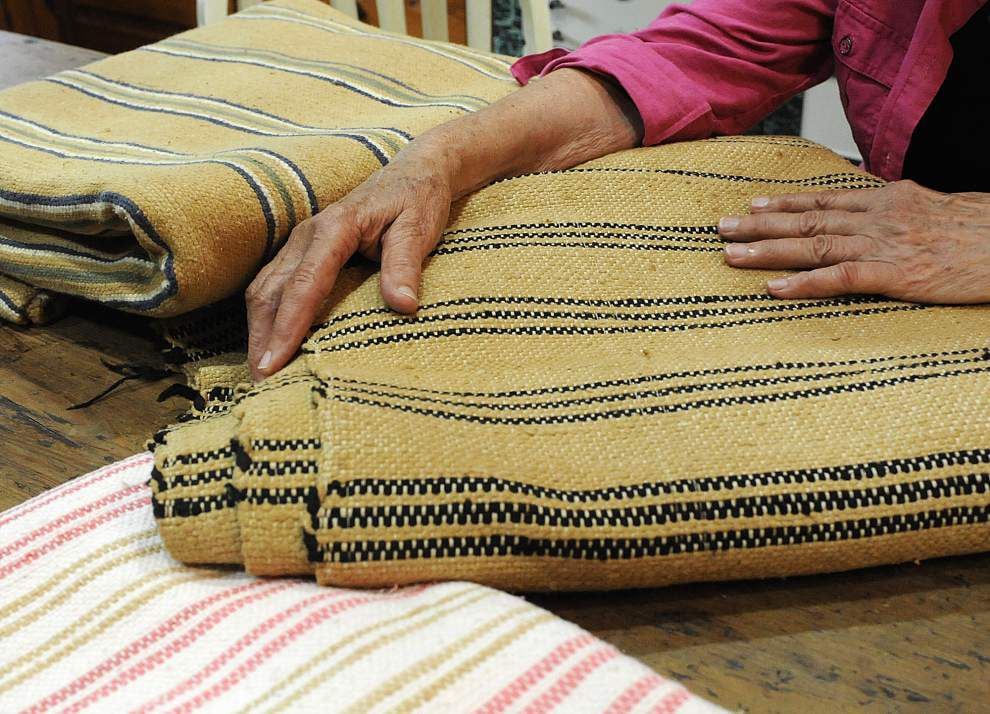 Advocate staff photo by BRYAN TUCK -- Elaine Larcade-Bouque shows off some blankets woven from cotton grown in south Louisiana at her home in Lafayette on Wednesday. 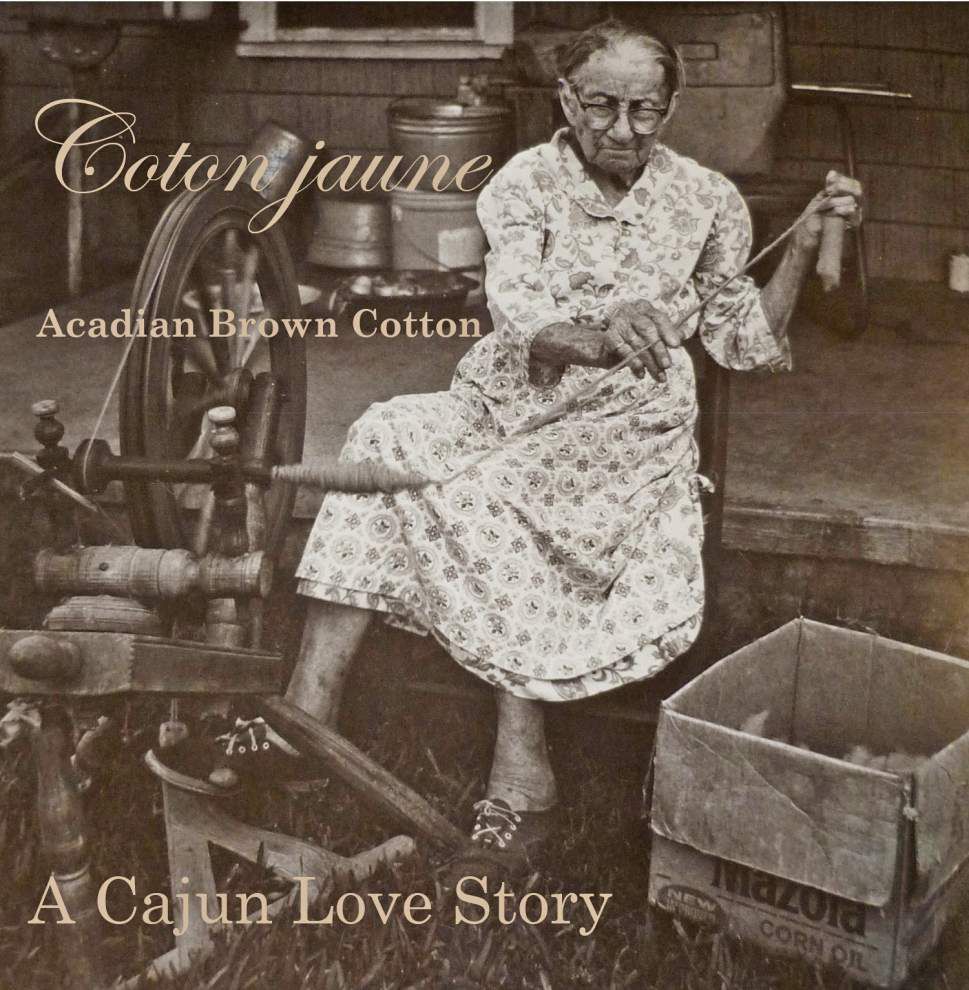 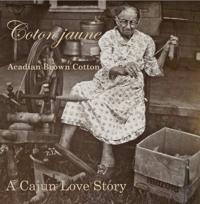 Photo provided by by Chere Coen -- Cinema on the Bayou presents the premiere of 'Coton jaune - — Acadian Brown Cotton: A Love Story'. 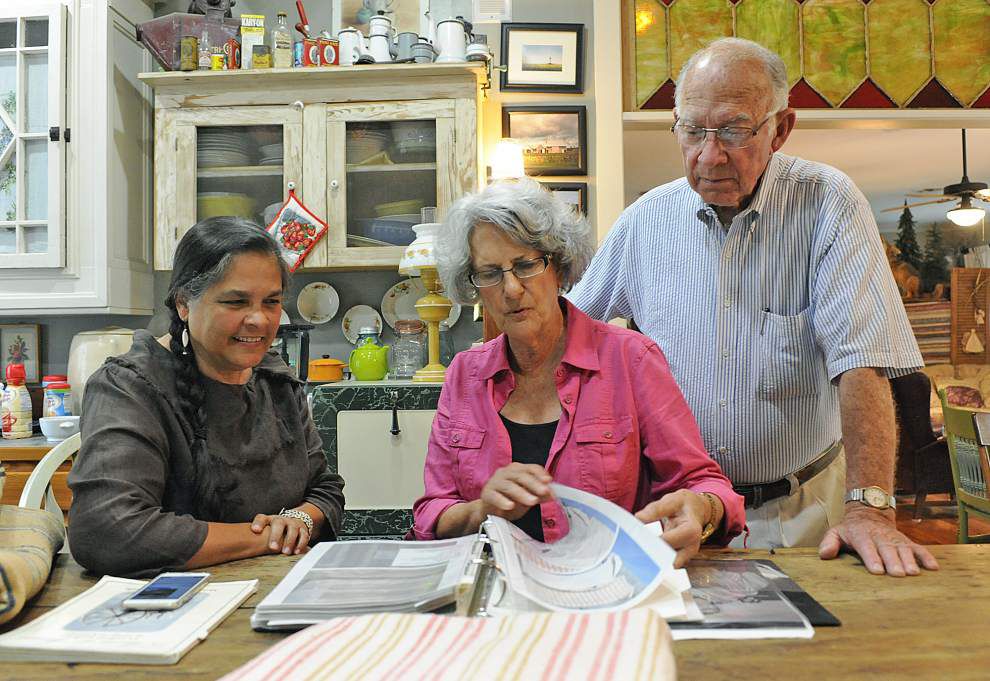 Advocate staff photo by BRYAN TUCK -- From left, Suzanne Chaillot Breaux, Elaine Larcade-Bourque and Jesse Gary look over Larcade-Bourque's book on cotton farming in south Louisiana at her home in Lafayette on Wednesday.

Advocate staff photo by BRYAN TUCK -- Elaine Larcade-Bouque shows off some blankets woven from cotton grown in south Louisiana at her home in Lafayette on Wednesday.

Photo provided by by Chere Coen -- Cinema on the Bayou presents the premiere of 'Coton jaune - — Acadian Brown Cotton: A Love Story'.

Advocate staff photo by BRYAN TUCK -- From left, Suzanne Chaillot Breaux, Elaine Larcade-Bourque and Jesse Gary look over Larcade-Bourque's book on cotton farming in south Louisiana at her home in Lafayette on Wednesday.

Art projects are sometimes like puzzle pieces, waiting for someone to see the big picture and put the puzzle together.

Such was the case of Sharon Gordon Donnan, of Los Angeles, and Suzanne Chaillot Breaux, of Lafayette, when they discovered a hand-woven Acadian blanket made from brown cotton in a Washington antique store and ended up creating a documentary on Acadian weaving titled “Coton jaune — Acadian Brown Cotton: A Love Story.”

Cinema on the Bayou Film Society will present the film at 6 p.m. Wednesday, May 13, at Vermilionville, in recognition of the 250th anniversary of the arrival of the first Acadians in Louisiana.

The program will begin with an introduction and presentation by filmmaker Pat Mire on the arrival of the Acadians and the significant role women played in keeping the culture alive.

The scope of the film, Breaux said, explores the women who created these home-spun, hand-woven blankets as a necessity, many times working the fields all day and then producing the simple but beautiful textiles out of brown cotton and sometimes scraps of clothing.

The film includes the collectors who now own such creations and promote the preservation of an art form that’s important to the continuation of Cajun culture, Breaux said.

Donnan is a filmmaker, educator and conservator of ancient and antique textiles. Breaux is a fiber artist, weaver and costume designer specializing in Mardi Gras and theatrical costumes.

The background of the two friends played a serendipitous role in the film’s creation.

Donnan spent years as a field conservator on the Peruvian north coast, excavating ancient textiles, and in Oaxaca in southern Mexico. In both places, women wove with brown cotton, Donnan said.

Breaux was raised in a Cajun household that had a loom.

She had traveled to Oaxaca to learn weaving before returning to Lafayette and entering the military.

When the two found the old Acadian blanket at the antique store, Donnan was amazed to find the use of brown cotton in Louisiana. “That’s what spurred my interest,” Donnan said. “I’ve never seen it outside of South America. Louisiana was the third place for me, and it all came together around brown cotton.”

From that point, the pieces began to fall together. They were referred to Charlene Quinilty at the Jean Lafitte National Historic Park, and she referred them to Elaine Larcade-Bourque, a weaver who studied under Acadian master weaver Gladys Clark. Larcade-Bourque has been documenting Acadian brown cotton weavers for years and owns a collection of old blankets. The documentarians then interviewed Ray Brassieur, an associate professor of anthropology at the University of Louisiana at Lafayette who has been researching brown cotton in Cajun culture.

With the help of the Lafayette film community, the Center for Louisiana Studies and collectors, plus money raised through an Indiegogo Internet campaign, the film was created.

The May 13 screening will be the film’s premiere.

“The encouragement of the community has been enormous,” said Donnan, who has created several documentaries, including the Louisiana-themed “Howard Citizen — The Man and the Music He Loves.”

The filmmakers said the oral histories gathered for the project reflect that the blankets, often handed down to their children, were made by “l’amour de maman,” or the mother’s love.

“These women never received much credit for their work,” she said. “And yet it’s part of why Cajun culture has been preserved. We thought, ‘What an important study — not only on this subject matter but on women’s studies.’ What amazing women.”

One of the women discussed in the film is Josephine Landry Gary, who created numerous brown cotton blankets while her grandson, Jesse Gary, watched and listened to family stories at her knee. She died at age 97 and is featured on the film’s promotional materials.

“She gave at least one blanket to all of her grandchildren,” Gary said. “She was still weaving two to three times a week before her death.”

The filmmakers interviewed people who owned old Acadian blankets, many who called them ugly, Breaux said. Once the interviewees started relating memories of the family members who created the textiles, the conversations turned nostalgic.

Breaux hopes the film helps give credit where it’s due, to the many women who produced a unique cultural product and kept the family warm at the same time.

She also said the experience helped her reconnect with the Acadian culture her mother tried to pass down.

“It (making the film) made me feel closer to my mother, and she would be proud of me,” Breaux said.

Larcade-Bourque and the filmmakers are still looking for owners of old Acadian brown cotton blankets. To contact them, email auboisbourque@bellsouth.net.