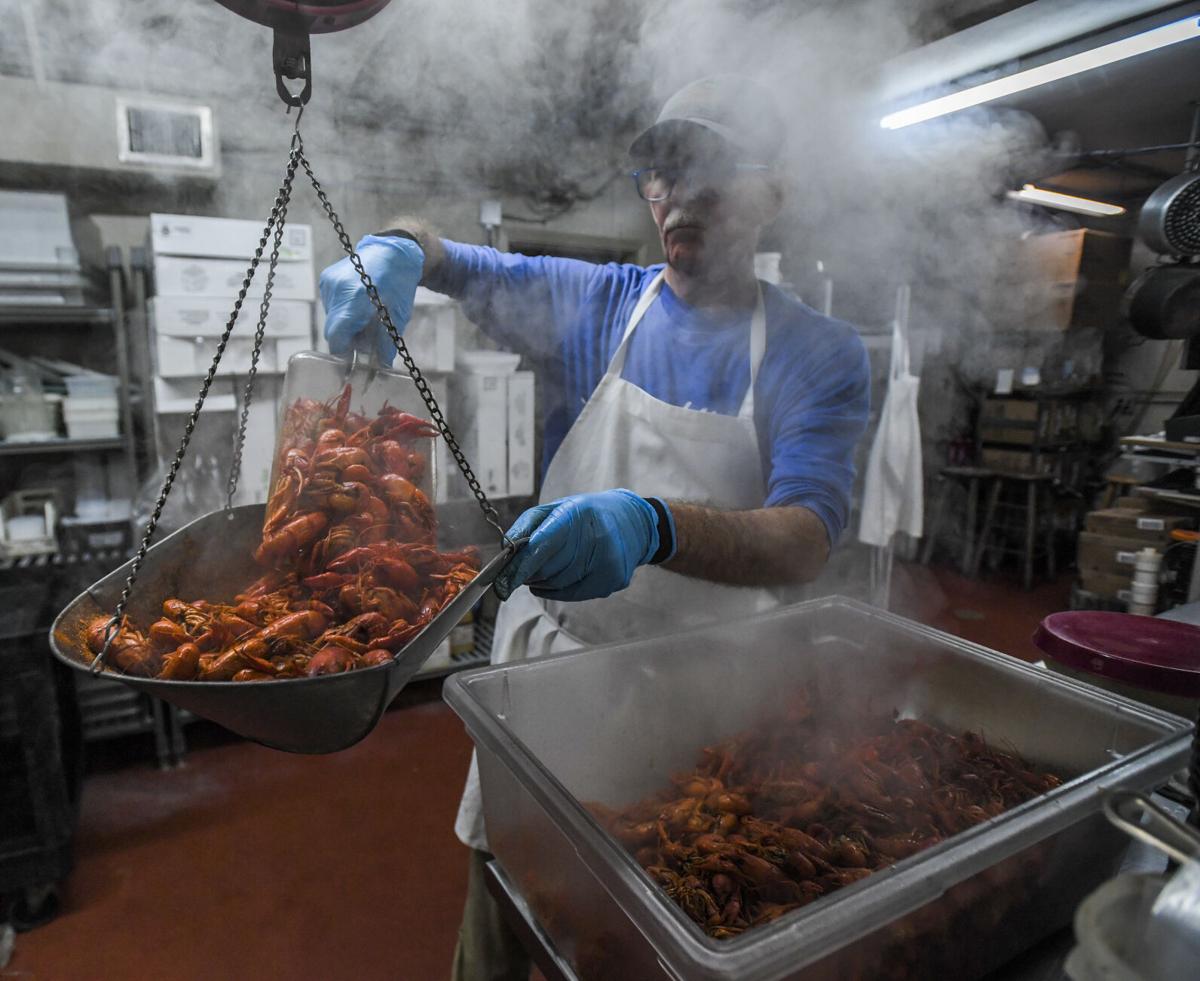 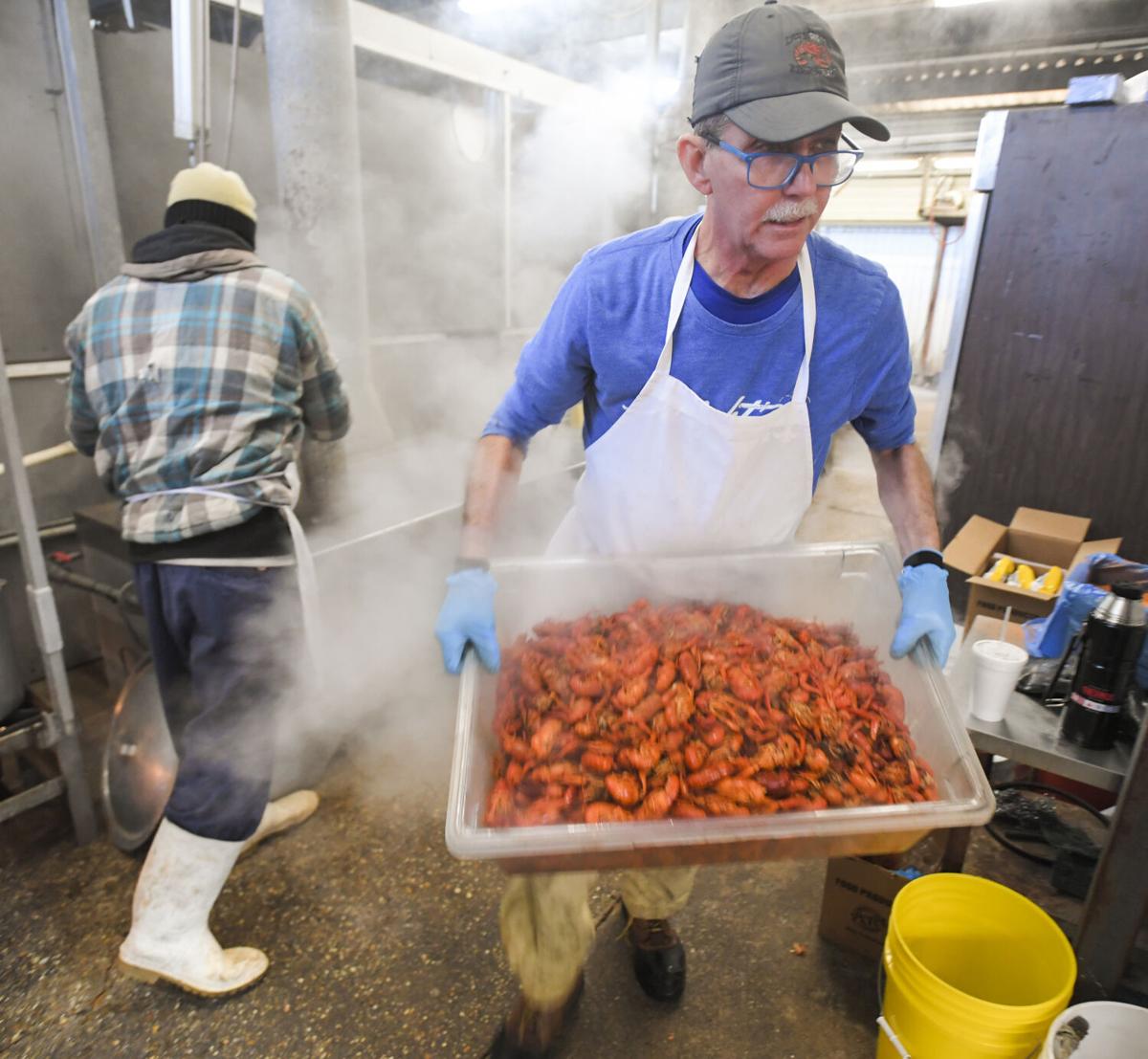 Employee Mark Royer caries a tray of boiled crawfish to the kitchen to be served at Dwight's Restaurant on Thursday, February 18, 2021 in Lafayette, La.. 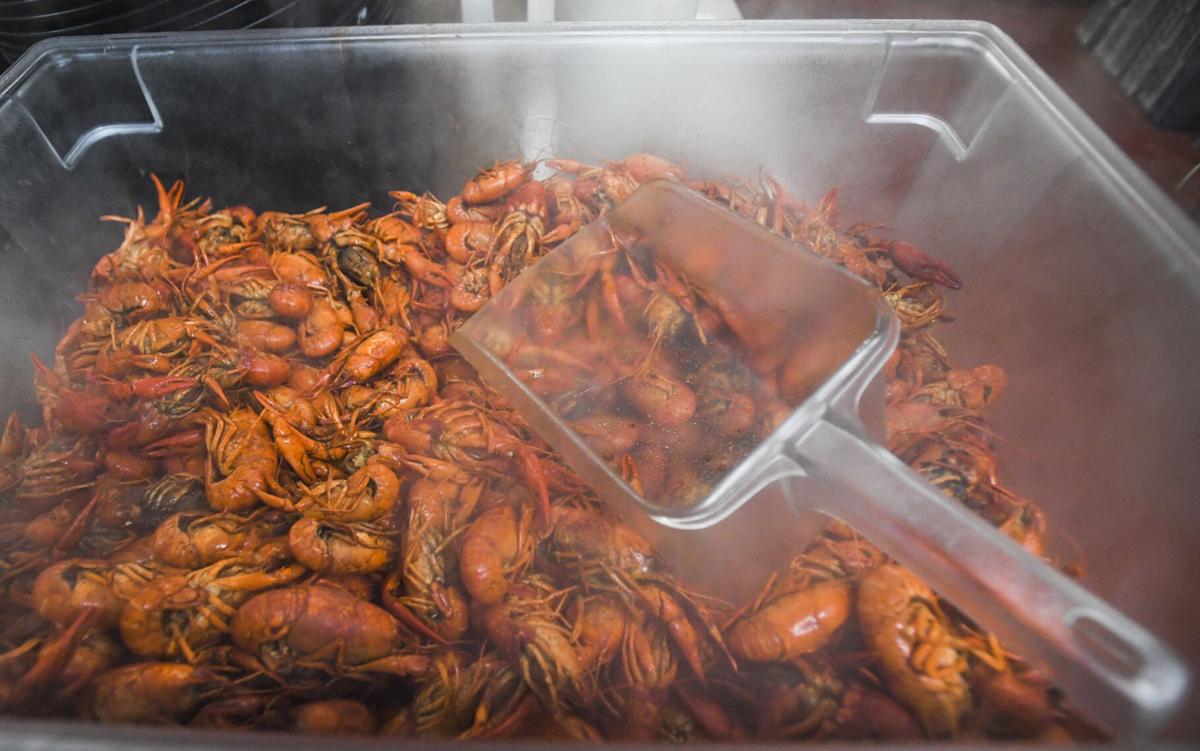 Boiled crawfish wait to be served at Dwight's Restaurant on Thursday, February 18, 2021 in Lafayette, La.. 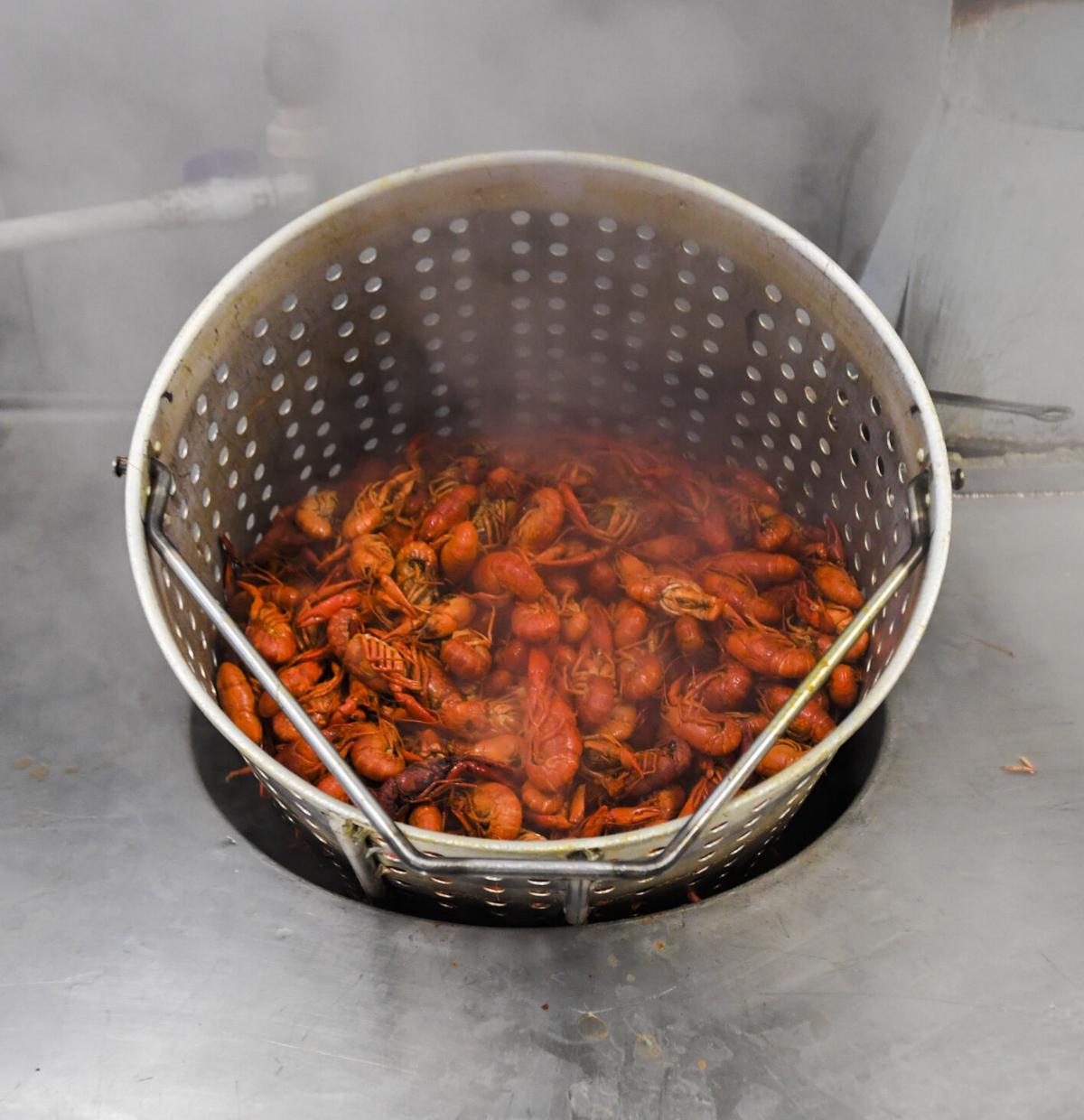 A basket of boiled crawfish at Dwight's Restaurant on Thursday, February 18, 2021 in Lafayette, La.. 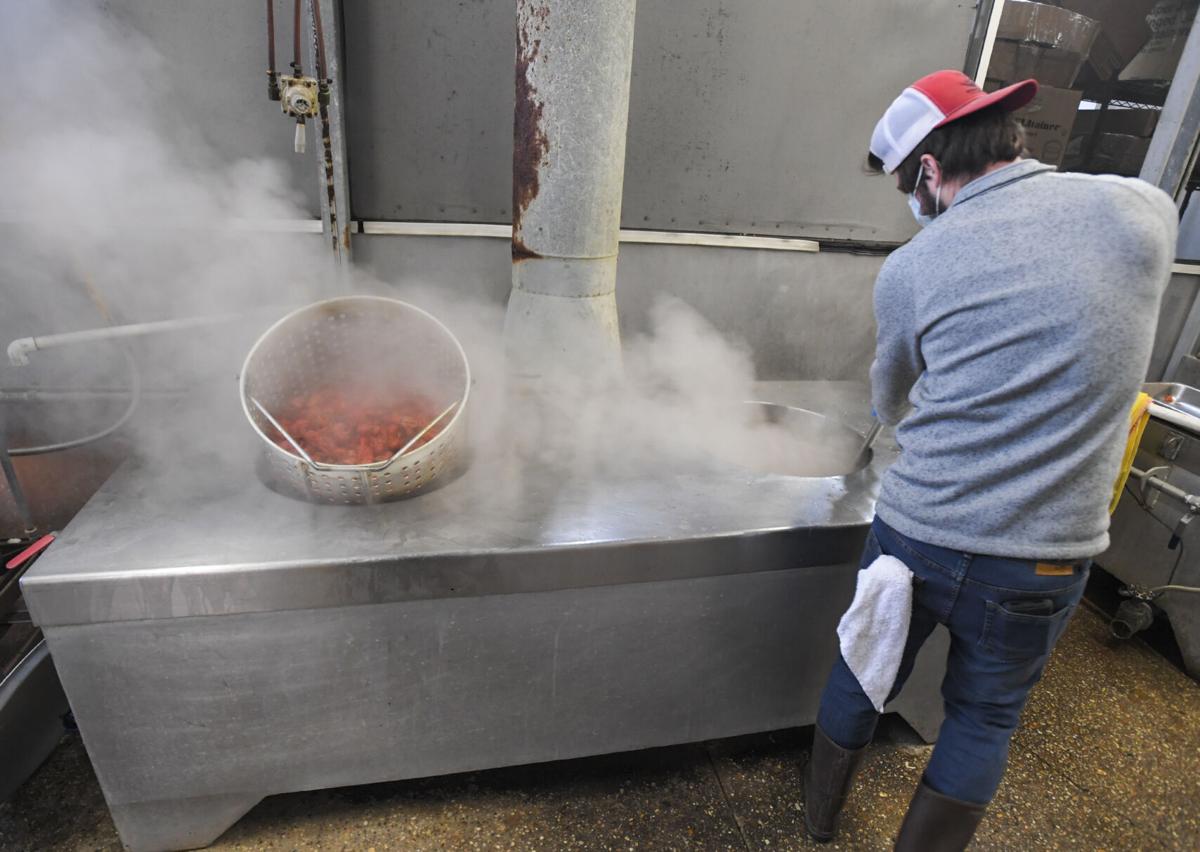 Employee Mark Royer caries a tray of boiled crawfish to the kitchen to be served at Dwight's Restaurant on Thursday, February 18, 2021 in Lafayette, La..

Boiled crawfish wait to be served at Dwight's Restaurant on Thursday, February 18, 2021 in Lafayette, La..

A basket of boiled crawfish at Dwight's Restaurant on Thursday, February 18, 2021 in Lafayette, La..

Crawfish, much like people, have not taken well to the cold weather blanketing the state.

But even if the ponds they call home became frigid or even iced over, that merely caused them to burrow down into their mud and stay there until it gets warmer, farmers and experts said.

The 2021 crawfish season, a year removed from a down season for many farmers across Louisiana due to the coronavirus pandemic, is off to somewhat of a slow start due to weather and other factors. Prices are higher than usual this time of year and the size of the mudbugs have been smaller.

A week of freezing temperatures, however, did not help.

“It’s been too cold where we’re not able to get into the fields,” Vermilion Parish farmer Allen McLain said. “It’s slowing the catch down more than what the catch was already. The catch was already slowed down by weather. It’s just pushing us back and missing a few larger crawfish selling days.”

Crawfish season is here, but so is coronavirus. Will there be some pent-up demand this year?

Some crawfish farmers were hurt last spring when the coronavirus pandemic caused demand to plummet. But like anything else, many farms were ab…

Dane Hebert, past president of the Louisiana Crawfish Farmers Association, said there have been some decent hauls at his roughly 300-acre farming operation in north Vermilion Parish this week, due to cages that were set before the winter storm, but freshly baited cages have yielded little to no return.

The timing is unfortunate because the catch was improving just before the winter weather after a slow start to the season.

“It’s just too damn cold,” he said. “It’s kind of like you and me — they just don’t move much. It’s going to knock back the catch significantly for a few days until the water temperature warms back up again.”

Warmer temperatures are expected at the start of the week, with highs getting back into the 60s by Tuesday, so the crawfish catch is slowly expected to return. The good thing is that as the crawfish emerge from the mud, they will eat and grow larger.

I Eat La.: Thaw out with a bowl of these rich, creamy seafood bisques

I don't know about you, but I'm still thawing out from the big freeze.

“This is delaying the harvest by a week or two, but the crawfish will be caught,” said Mark Shirley, an Abbeville-based crawfish specialist with the LSU AgCenter. “This is upsetting our crawfish boil schedule, but tail meat is available. I would encourage everyone who wants to enjoy crawfish to make a big pot of étouffée.”

Laney King, who created the Crawfish App, which tracks prices for live and boiled crawfish, said so far this season, prices have been higher and the crustaceans have been smaller than they were last year. On the first Friday of Lent in 2020, which was Feb. 28, a pound of live crawfish generally sold for just under $3 a pound or $90 for a sack.

Lent, which began Wednesday, generally marks the start of crawfish season, with crawfish boils becoming a regular occurrence. After last year, she said, people are craving crawfish more than ever.

“The first Friday of Lent is almost as big as Easter and Mother’s Day,” King said. “This is a crucial week, and it’s not good for the industry to start off like this. Mother Nature is not cooperating.”

Griffin Dorr, of C&J Farms near Crowley, said he’s worried the price could get high enough where customers won’t buy crawfish. Prices he’s seen so far are about $3.50 per pound.

“Hopefully after all this is over, we can get back on track and look forward to the future of the season,” he said.

Even before the freezing weather, the crawfish crop had been hampered by an ill-timed November cold snap, which slowed up growth, said Greg Lutz, an LSU AgCenter crawfish specialist. The cold-blooded creatures can handle water temperatures that are near freezing, and colder water is saturated with oxygen, which allows them to simply wait for the water to warm.

The real problem, he said, is what the freeze has done to the vegetation in crawfish ponds. Crawfish feed on little bits and pieces of stems and leaves. A hard freeze causes the plants to break down faster, meaning that there may not be food left later in the season.

The festival is expected to return in 2022.

Lutz said there aren’t any reliable, cost effective ways of feeding crawfish, outside of the natural vegetation found in a flooded rice field or leaves dumped into a pond in the fall. So if the food supply runs out before the season ends, crawfish may stop growing and just go down in the ground earlier.

The temperatures have also slowed down deliveries of crawfish to buyers. McLain said he just shut down everything last week since buyers opted to stay put and not put a driver on the road during the icy conditions.

“We still have time to recoup but it gets shorter,” Hebert said. “The time for us to be profitable, that window gets shorter because of this event. I’m still optimistic that we can still have a decent season and hope we can provide the public with a quality product.”