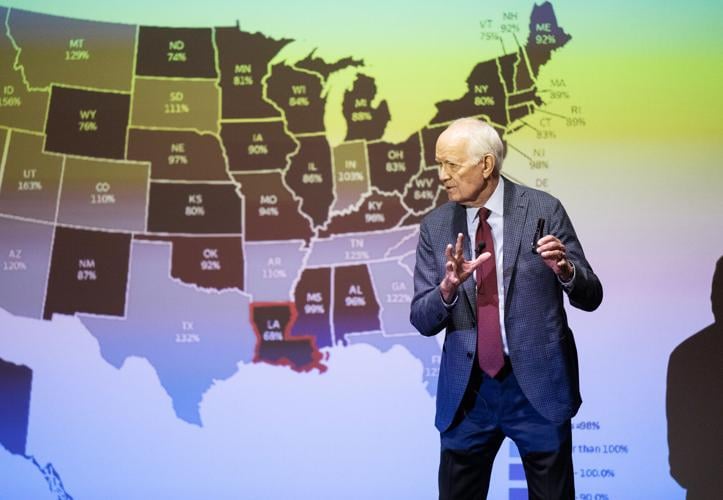 Economist Loren Scott gives his economic outlook for the region Wednesday, October 5, 2022, during a One Acadiana breakfast event at the UL-Lafayette Student Union Ballroom in Lafayette, La. 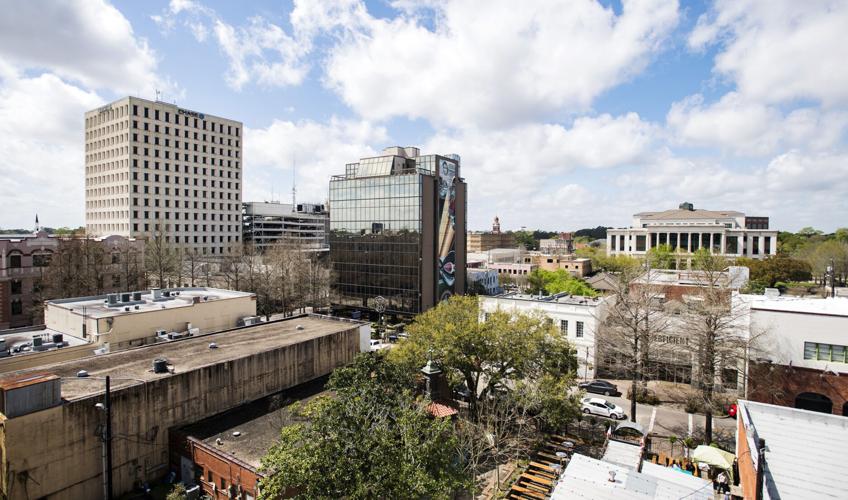 Economist Loren Scott gives his economic outlook for the region Wednesday, October 5, 2022, during a One Acadiana breakfast event at the UL-Lafayette Student Union Ballroom in Lafayette, La.

The Lafayette area could gain 5,300 jobs over the next two years, but the region’s economy is likely to be held back by slow drilling activity in the Gulf of Mexico, according to the Louisiana Economic Forecast, an annual report published by economist Loren Scott.

Scott’s report was unveiled Wednesday morning at a One Acadiana event.

The region’s recovery has been steady since COVID-induced shutdowns wreaked havoc on the economy more than two years ago. Lafayette has regained 81% of the jobs it lost in 2020 but is still about 4,000 jobs below its pre-pandemic peak.

However, the outlook for the state’s oil and gas industry is uncertain, to say the least. Lafayette is the state’s second-most oil-dependent economy in Louisiana.

Even though oil could hover around $80 per barrel for the next two years — down from $120 in June but a far cry from sub-$20 prices in 2020 — the report said “antagonism” amid the Biden administration’s push for cleaner energy will keep oil production below its pre-pandemic levels. Scott, at the Louisiana Business Symposium on Tuesday, added that he does not expect a lease sale to happen in the Gulf in 2023.

The report noted that the number of rigs exploring for oil and gas in the Gulf of Mexico has stayed low, despite higher-than-usual oil prices this year, as pressure from the White House has deterred companies from drilling. Fifteen rigs were active as of Friday, compared to 56 in September 2014.

Though the report does not outline Louisiana’s oil and gas employment totals, it says the Lafayette and Houma-Thibodaux economies will be weighed down by slower gulf drilling activity.

Meanwhile, natural gas prices should stay around $8 per million British thermal units in 2023, amid high demand for U.S. liquefied natural gas in Europe, before dipping to about $5 in 2024. That could cause more pain for Louisiana’s industrial and electricity-generation sectors, both of which are heavily reliant on natural gas.

Should oil and gas exploration in the Gulf remain miniscule, exploration companies and the businesses that support them could suffer.

It isn’t all doom and gloom for the Acadiana economy. The region still has a diverse employer base that includes Acadian Ambulance, Stuller Inc., LHC Group, ASAP (formerly Waitr) and the University of Louisiana at Lafayette, among others.

SafeSource Direct, a PPE manufacturer that opened last year in Broussard, is now at 540 employees but will get to 1,200 by the end of next year.

"The good news is, especially for oil patch cities around the country, you've really diversified in the last 15 years," he said. "You have a lot of companies here that are not directly related to oil and gas."

In addition, a host of economic development projects are on the horizon. Ochsner is building a $94 million tower at its Lafayette campus, Delta Biofuels is working on a $70 million biomass fuel pellets plant near Jeanerette and Supreme Rice will spend $16.2 million on a facility expansion for ready-to-eat products.

The $58 million dredging project for the Acadia Gulf of Mexico Access Channel should be a boon for the Port of Iberia, the report said. The project will allow larger vessels to barge out of the port, which will boost southwest Louisiana’s booming liquefied natural gas export industry.

Chart Industries, which makes “cold boxes” for LNG shipping, wants to double its footprint at the Port of Iberia, and Baton Rouge-based Turner Industries moved onto a 95-acre site at the port in anticipation of greater demand for modular construction there.

Of all Louisiana metros, Lake Charles leads the pack with a projected 4.4% growth rate in 2024, followed by Shreveport (2.2%) and Houma (2.1%). Lake Charles is still 57% below its pre-COVID-19 employment levels because of the slew of hurricanes and weather events the past two years, but pending liquefied natural gas facilities should boost the region’s economy.

Statewide, Louisiana should gain a modest 14,300 jobs next year and 30,800 the following year, a growth rate of 1.6% in 2024 that will be largely driven by industrial construction, new health care facilities, new Amazon distribution centers and casino expansion projects.

The New Orleans area could see gains of 3,600 jobs in 2023 and 8,600 jobs in 2024, largely from industrial construction. However, the region has regained 61% of the 112,000 jobs it has lost since the pandemic began, and lagging tourism is still a drag on the city’s economy.

In Baton Rouge, pending industrial construction boom and the opening of a massive Amazon facility should boost jobs in the region by 12,400 over the next two years.

Adam Daigle contributed to this report.