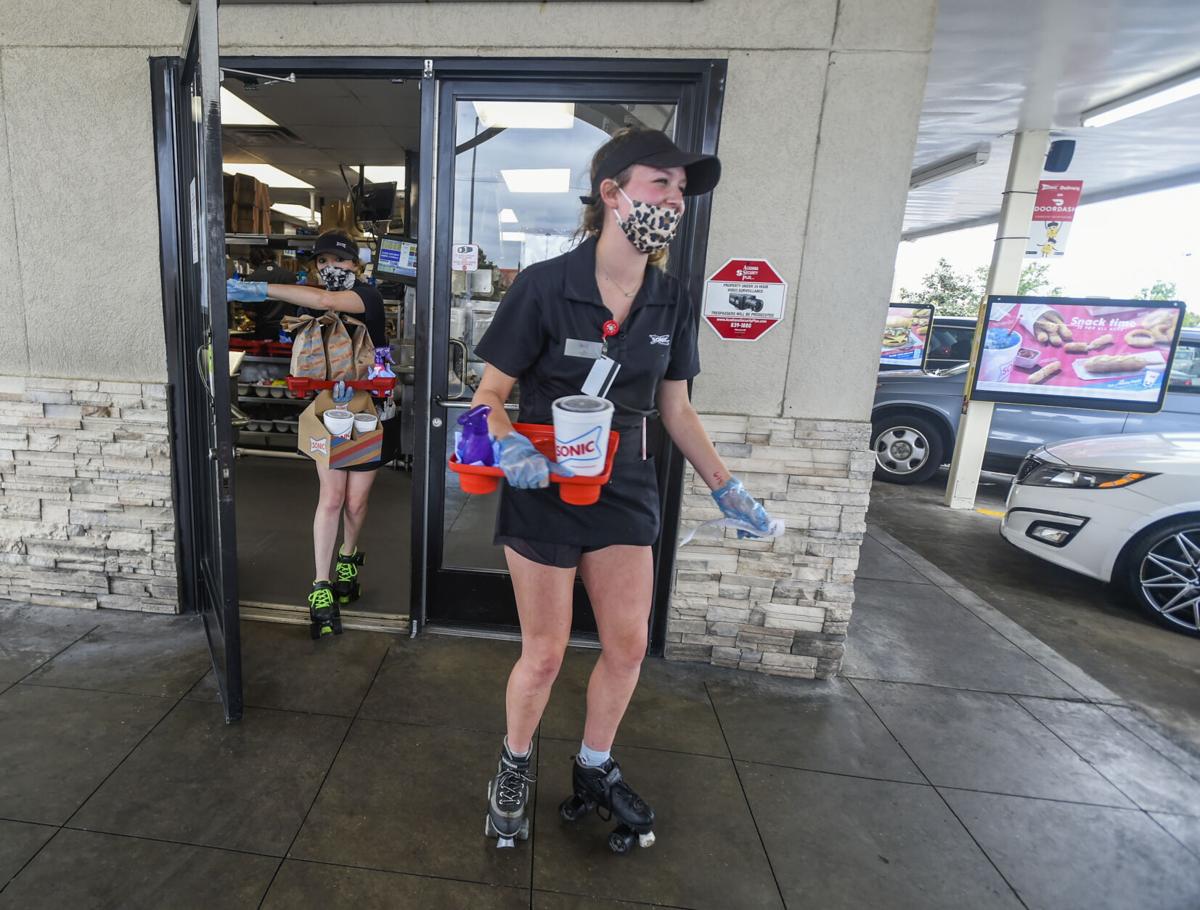 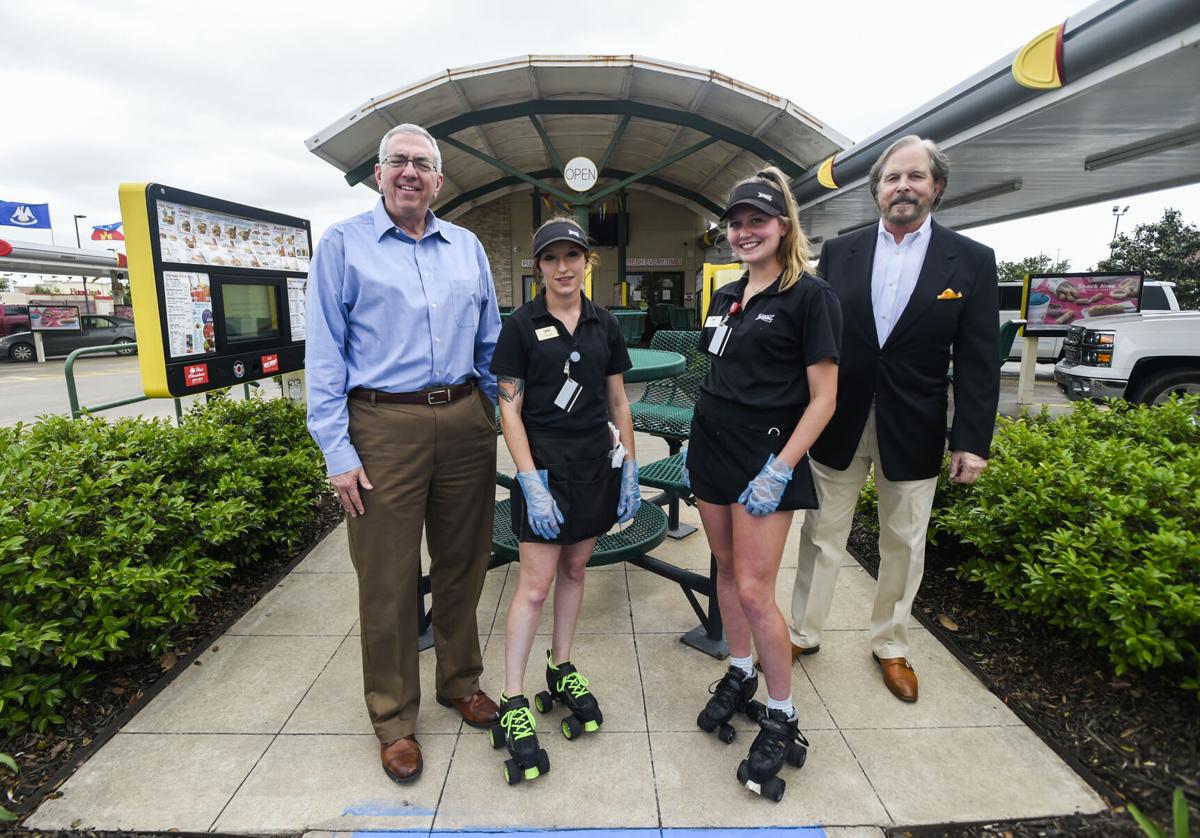 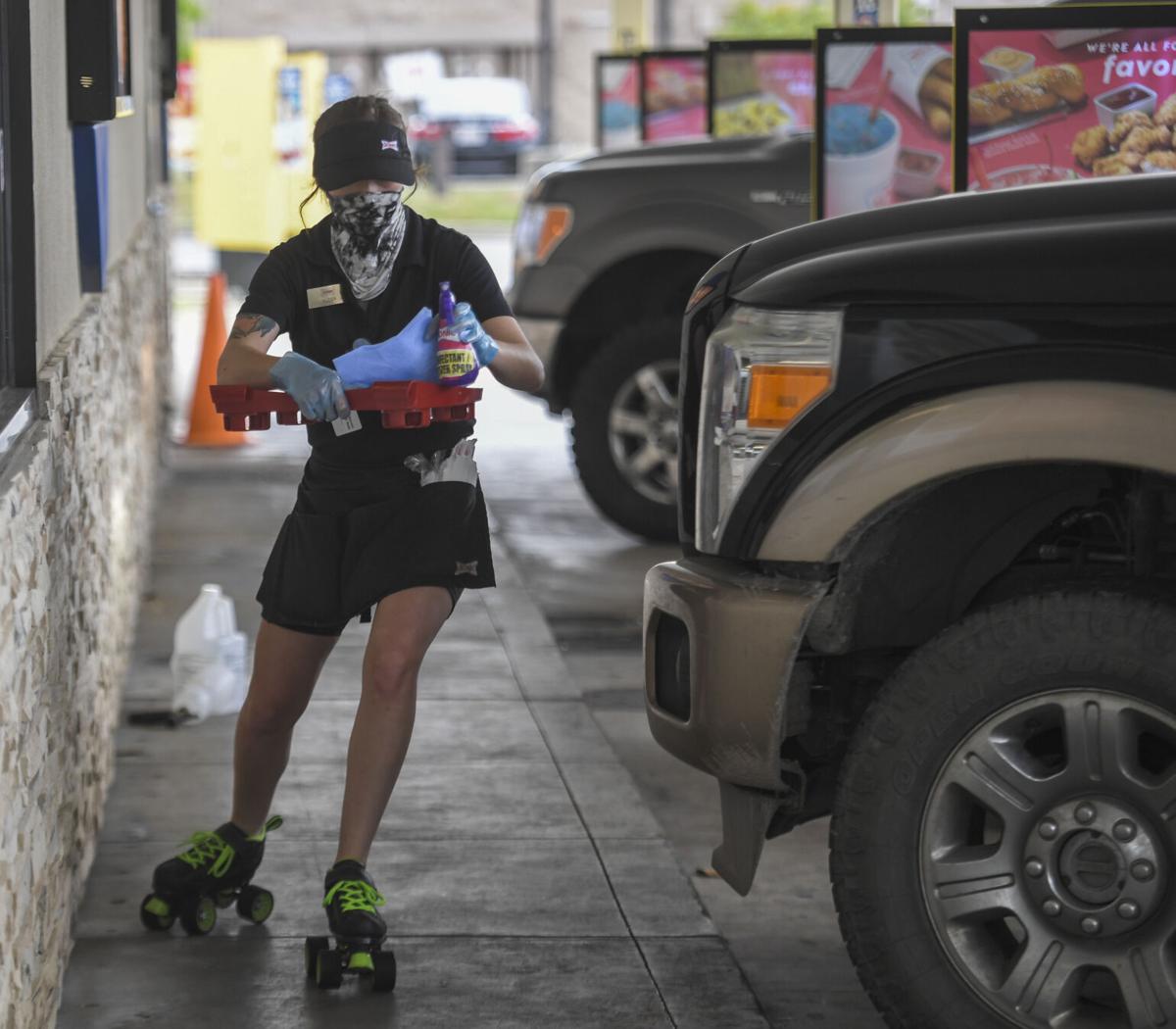 Car Hop Allison Jenkins skates back to the kitchen after making a delivery at Sonic Drive In on Kaliste Saloom Road Friday, April 23, 2021 in Lafayette, La..

Car Hop Allison Jenkins skates back to the kitchen after making a delivery at Sonic Drive In on Kaliste Saloom Road Friday, April 23, 2021 in Lafayette, La..

Kayla Picou went through the drive-thru window at a Wendy’s earlier this month in Lafayette to get food for her kids and was offered a job.

The Youngsville mother of two was taken aback at the offer since she was only trying to go inside to get the food that was left out of her order after going through the drive-thru a first time. The lobby was closed, so she went back to the drive-thru window to get the order straightened out.

Then she learned why the lobby was closed.

“The manager told me, ‘I’m sorry. I can’t open the lobby because no one wants to work,’” Picou said. “And then she asked if I wanted a job. She said they’d hire anyone at this point.”

The lack of employees at Wendy’s was no fluke. Quick-serve restaurants in Acadiana and across the country are facing a severe hiring crisis as the number of applicants has dried up.

Now that restaurants in Louisiana are allowed full capacity following months of restrictions related to the coronavirus pandemic, the issue has become magnified.

At the Wendy's, the staffing shortage has forced the the franchisee, Georgia-based Wen-Star, to close all the dining areas in its five Lafayette-area stores.

“People are not showing up for work,” said Bobby Dunning, Wen-Star’s vice president of operations. “We’ve done everything we’ve been able to do. We’re constantly looking to hire people. We have to take care of the people that are there. If we have to keep the dining room closed to keep the pressure off the people we have there, then that’s what we’re going to do.”

The reason? Many point to the increased unemployment benefit and recent stimulus payments. How prevalent that is is anyone’s guess, but others in the industry are now throwing anything and everything — including higher wages — at the problem as customers are returning to dine-in restaurants.

Restaurants nationwide reported a 32% increase in total sales last month, according to a QSR Magazine report.

“It’s brutal,” said Adam Diamond, CEO of ADT Pizza, which operates 26 Pizza Hut locations in Acadiana, many of which could use three or four more workers. “Nobody will work. We’re pulling out all the tricks. We’re spending a lot more money on recruiting than we have before. We’re switching from consumer marketing to job marketing. We’ve hired a recruiting firm for the first time. We’re increasing pay. If people ask for more money, we give them more money.”

The Shrimp Basket, an Alabama-based chain of seafood restaurants, made the biggest splash in the industry this week. It is offering new hires and employees who recommend a new hire a chance to win a new car.

So many others are offering incentives that it’s almost become an arms race. At Half Shell Oyster House, the Mississippi-based seafood and steak restaurant with a location in Lafayette, company officials recently raised its minimum wage to $12 an hour for all nontipped employees and are offering up to $500 in bonus money for referring an employee to join the company.

'Trying to build up our side of town': Cafe moves into Taco Bell space along Evangeline Thruway

Each of its 14 locations could use another seven to 10 people, said company VP Kevin Fish said.

“I’ll be honest: I’m a very conservative person, but I think it’s actually within conservative values to take care of people that work for you,” Fish said. “I think we have a custodial responsibility to care for them. It (finding workers) has been a struggle. We haven’t had the struggles that some other places have had, but it’s been difficult. It’s been very difficult.”

RPM Pizza, which owns the 10 Domino’s Pizza locations in the Lafayette area, is offering signing bonuses for drivers who stay on a certain amount of time along with a $250 bonus for any team member who recruits a driver who stays 60 days. Some locations, recruiting manager Sara Smoot said, are even offering a free pizza for simply showing up to an interview.

In the Lafayette market, it could hire at least 90 employees right now, she said. Maybe more.

“We definitely have seen a reduction in applications,” Smoot said. “We’ve had to adjust to trying to find new and creative ways to get applicants inside the door and, once we get them in the door, get them for an interview. We have some applicants not showing up for interviews.”

Kergan Brothers Sonic, which operates six Sonic locations in Lafayette and 50 others in Louisiana, could use as many as 10 more workers at every store, company president Gary Wilkerson said. It recently raised its starting wage to $8, and employee evaluations are now done more than once a year with a chance to get a raise. It’s also common for the company to provide workers with cookies or cake during a shift.

Lafayette area adds jobs in March, see how many

Acadiana added 1,800 jobs between February and March, the largest increase posted by any of the state’s metro regions.

Current and new employees can get $75 as part of the company’s referral program.

“Staffing is everything to us,” Wilkerson said. “We’re just not getting a lot of applications. This (issue) didn’t just happen. It’s exaggerated right now, but staffing in our industry has been in bit of a decline for a couple of years. You can go back to last March when things really started. Staffing really got challenging in March and April of last year, and it hasn’t stopped. Everybody is trying to find the same person.”

Some online job listings for positions are Lafayette-area restaurants include bonuses. Bon Temps Grill’s ad seeking a grill cook/prep cook include a $100 signing bonus. A listing for Saltgrass Steakhouse offered $250 in bonus money.

Respondents for this story and others nationally almost consistently point to the same issues: the federal unemployment benefit and the recent federal stimulus checks.

The $300 weekly federal unemployment stacked on top of a state benefit that maxes out at $247 is enough to convince displaced workers to stay on the sidelines, company leaders claimed. Stimulus checks for at least $1,400 as part of President Joe Biden’s $1.9 trillion coronavirus relief package may have also kept people at home instead of working.

Artmosphere still up for sale, but live music will return May 20

Artmosphere Bistro is still up for sale, but the owner says it’s not going away any time soon.

“I think the stimulus payments and unemployment benefits are necessary,” Diamond said. “They put money in their pockets and they’re able to take care of their kids. (But) I think people who are not making a lot of money take a break. A lot of people say (screw) it when they get those stimulus checks.

“We get a lot of applications but not a lot of follow through. If you’re on unemployment benefits, you have to apply for jobs and show you’re applying for jobs. We’ll get 50 people apply for a driver job but like one person call back.”

Still, the number of restaurant jobs nationwide continues to bounce back, the QSR report indicated. Restaurants added 175,00 jobs in March, lower than the 309,000 in February, but the industry has brought back 4.2 million since April 2020 when it lost 5.5 million jobs as the start of the pandemic when restrictions were placed on restaurants.

Last month restaurants employed 10.5 million workers, still down nearly 2 million from prior to the pandemic.

In Louisiana, total jobs in food service and drinking places rose by 4,000 but still remain down just under 14,000 jobs from a year ago.

That total could rise in the coming months, Wilkerson said.

“I do believe that once the kids are out of school people are going to be looking for summer jobs,” he said. “Hopefully we’re going to get our fair share of those people. We’re doing the best we can while we can. I am amazed when I go to a drive-in and visit (our) stores. Our people do such a great job, and they do it with a smile on their face.”

Wendy’s could add as many jobs as there are people interested in working at one of its locations. Sales, Dunning noted, remain strong and the breakfast menu has become popular despite the staffing issues. Employees — with a wage that starts at $9 an hour — get hired but “then they just don’t come back. You can’t fire someone who’s not there.”

'It's a big change': Amazon bringing complaints of traffic, noise to Carencro months before its arrival

Paul Morgan and his wife of 47 years, Mary, still live in the doublewide trailer they put on the property they bought in 2016 at the end of Ca…

The two Wendy’s locations that closed in Lafayette, he noted, were not related to staffing challenges but instead because Wen-Star was leasing those buildings.

But until staffing issues are resolved, there may be situations similar to Picou experience at Wendy’s. And they'll very likely occur because the operation is understaffed.

“It just kind of made my heart heavy,” Picou said. “This manager clearly loves her job and she wants good people, and at this point in time it’s either nobody or just anybody, basically. For her to ask if I’m looking for a job in the drive-thru, I was like, ‘Man, they’re really desperate for workers.’”

Acadiana Business Today: 'Nobody will work': Acadiana restaurants are facing a hiring crisis in wake of COVID restrictions

Each week, thousands of Louisiana residents continue applying for jobless benefits, 14 months after the coronavirus pandemic and sweeping layo…