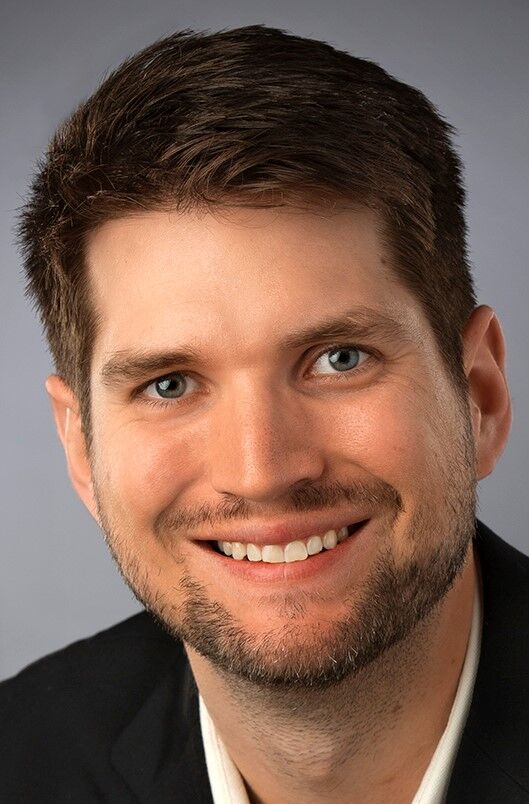 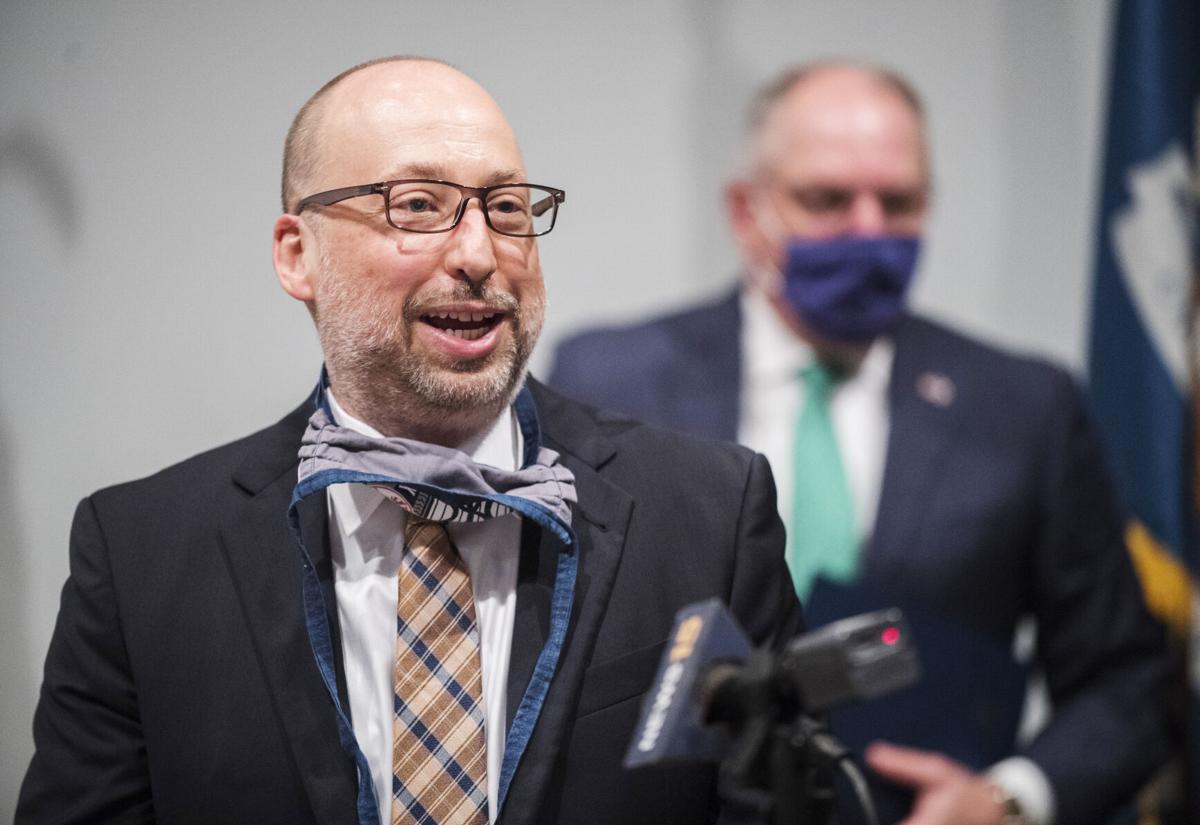 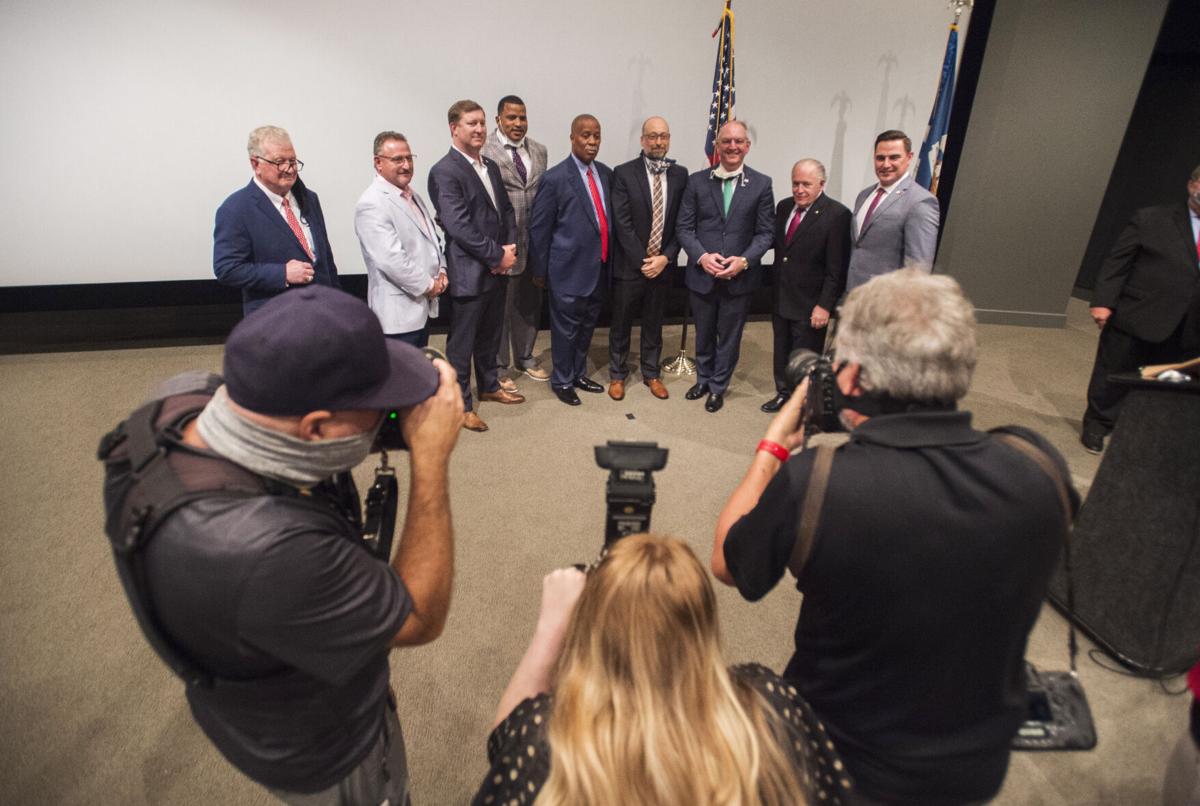 Elected leaders, including Gov. John Bel Edwards, third from right, company representatives and UL administrators pose for a photo during a press conference to announce that SchoolMint will move it's headquarters to Lafayette Monday, July 27, 2020, at the LITE Center.

Elected leaders, including Gov. John Bel Edwards, third from right, company representatives and UL administrators pose for a photo during a press conference to announce that SchoolMint will move it's headquarters to Lafayette Monday, July 27, 2020, at the LITE Center.

Back in 2004, when information technology was slowly becoming mainstream and Carencro High School’s Academy of Information Technology was starting, teacher Joel Hilbun sought out a student to design an online application form for the program.

A sophomore then, he was someone who could usually be found in the back of the class working on projects. He had already bought a laptop with money earned mowing lawns. And he and Hilbun had earlier worked on a program that tracked sports stats while games were going on.

The online application worked, but Bienvenu kept tinkering with it. So much that it was later adopted by the schools in Lafayette Parish. And he kept tinkering.

So much so that when he began working with Firefly Digital of Lafayette after college and got a call in 2012 from East Baton Rouge Parish officials who were interested the application — which didn’t even have a name then — something happened.

“When Firefly came to me because East Baton Rouge contacted them and wanted to use the system, that’s when the light bulb went off,” said Bienvenu, who now lives in Billings, Montana. “Maybe we’ve got something here. That’s how Smart Choice (Technologies) came to be.”

Smart Choice not only came to be, but it was the seed of a development that took about seven years to blossom. It grew from a one-man operation into one that merged with FireFly Digital and in 2019 with San Francisco-based SchoolMint, which announced Monday its plan to leave Silicon Valley and move its 178-employee operations to Lafayette.

“Casey is a pretty amazing guy,” SchoolMint CEO Bryan MacDonald said. “He is the classic sort of get-it-done computer expert. To have him start as a sophomore with a web form and turn that into a product that hundreds of school districts are using is pretty remarkable. It was a great environment for that company to grow, and we’re confident it’s going to continue to be a great one for us to expand.”

The tale makes for great storytelling, but inside it is also a story of a transitioning tech industry and how a simple idea, hard work and connections brought a large company to a mid-sized market in south Louisiana. Bienvenu, who began as an intern at Firefly Digital and later worked there after graduating from the University of Louisiana at Lafayette in computer science in 2009, was a tireless worker, always with his laptop, his parents noted.

“It was almost a 24-hour deal with him when he first started off with Smart Choice,” said his dad, Morris Bienvenu. “He was the only programmer.”

Smart Choice began specializing in online applications and lottery management systems. The more it grew, the more it started to compete against a big company based in Silicon Valley with offices in New York and Miami. In November, that big company — SchoolMint — joined forces with Smart Choice and brought Bienvenu on board. Firefly Digital CEO Mike Spears also came on board as a strategic adviser to MacDonald’s leadership team.

Now it lists itself as the leading provider in enrollment management solutions to school district and charter schools across the country. It serves more than 9 million students and 18,000 schools.

“You get to the point where the big projects get harder,” Bienvenu said. “We had so many things going on. If there was a bid, it was us and SchoolMint pretty much competing for the same bid. So we finally decided, ‘Let’s stop fighting and pulling against each other and start pulling in the same direction.’ Combined, we’re the leader in that space.”

The exodus of companies from Silicon Valley have been well-documented. Reports cite the state’s high tax rate and the rising cost of living so much that a company’s revenue jumps and employees get raises just by a company packing up and leaving.

When SchoolMint decided it needed to look elsewhere, it looked at several locations. But when Debbey Ryan with the Lafayette Women’s Chamber recommended Lafayette during a November meeting with Spears, that may have also put things in motion.

“We realized this could be potentially game-changing for us,” MacDonald said. “We plan to tell everybody else in the tech community what we’ve learned about Louisiana.”

In Lafayette, it’s another gain in the competition to lure tech companies to the area. It was that Tech South Summit in 2005 at the Cajundome that got people talking about creating Silicon Bayou, a hub for tech companies in the area. Fifteen years later the results are there: CGI, Perficient, Golfballs.com, Waitr and others. CGI hopes to raise its employee count to 800 when it opens a downtown Lafayette location next year.

The arrival of CGI, the fifth-largest information technology services company in the world, made Lafayette a destination in the world of tech companies, said Ramesh Kolluru, vice president of innovation, research and economic development at the University of Louisiana at Lafayette.

The Lafayette area had 1,400 computer and mathematical occupations as of May, according to data compiled by the Lafayette Economic Development Authority.

“We always talk about it, right? Silicon Valley, Silicon Bayou,” Kolluru said. “This is something the community has been preparing for for a long time. We’ve had prior successes in moving companies to Lafayette from other parts of the world, including Silicon Valley. But none this big. We’re excited.”

Tech jobs are arriving in Louisiana, Gov. John Bel Edwards noted during Monday’s announcement, and many of them are luring Louisiana natives back to their home state. SchoolMint will move quickly in its hiring, with MacDonald announcing Monday his company has offers out to six people and will team with LEDA to host a career fair soon to hire 15 more.

“We’re in it for the long haul,” Kolluru said. “We’re not happy with 180 or 179, just like we were not happy with CGI’s 400. We want them to double their commitment at some point in the near future.”

Our Views: A local success story for Acadiana’s Silicon Bayou

A company’s relocation doesn’t usually have such a great local tie, but that of a Silicon Valley firm moving to Lafayette does.