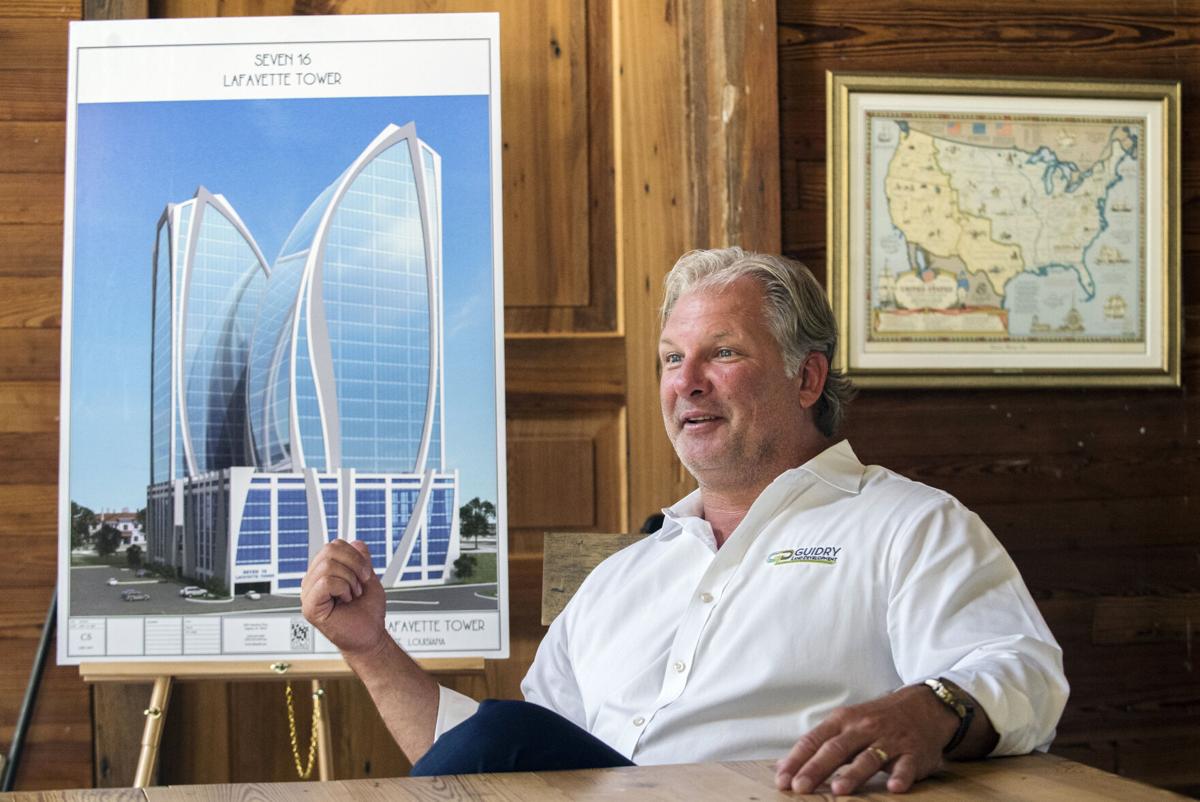 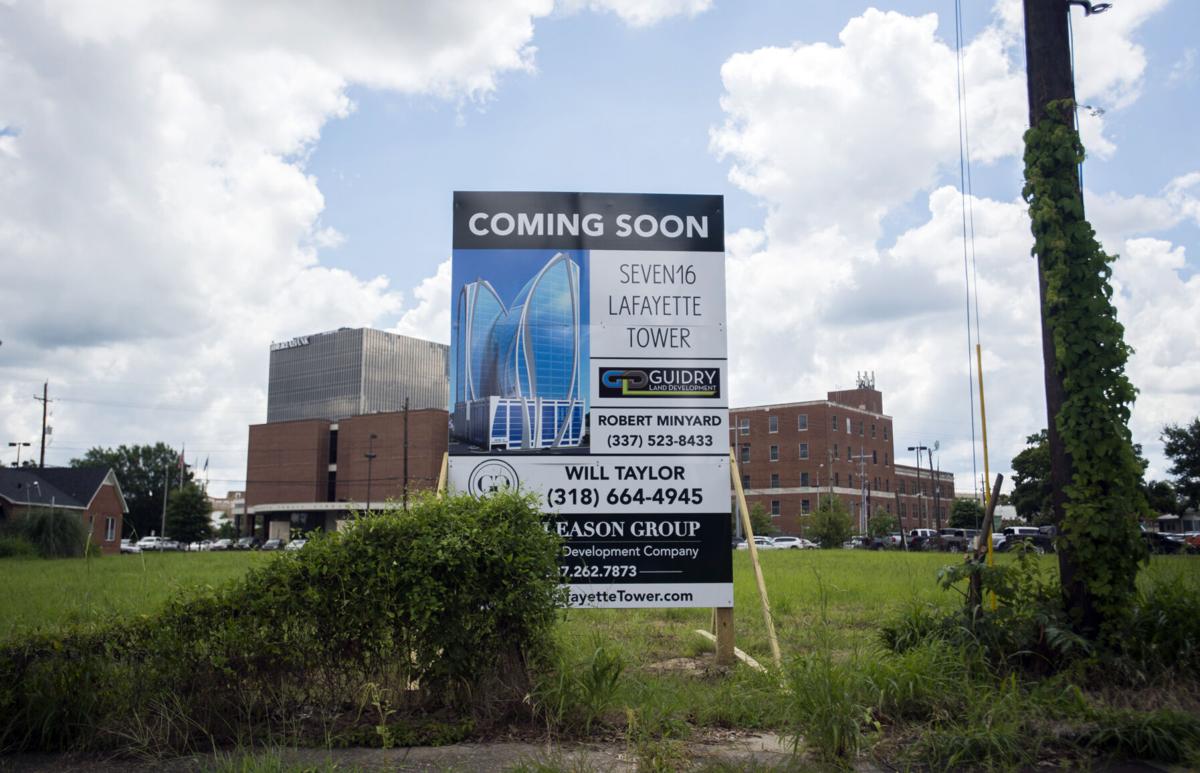 The Iberia Bank Tower and the Lafayette Public Library are seen in the background at left behind an informational sign for Seven16 Lafayette Tower Thursday, July 1, 2021, on South Washington Street in Lafayette, La. 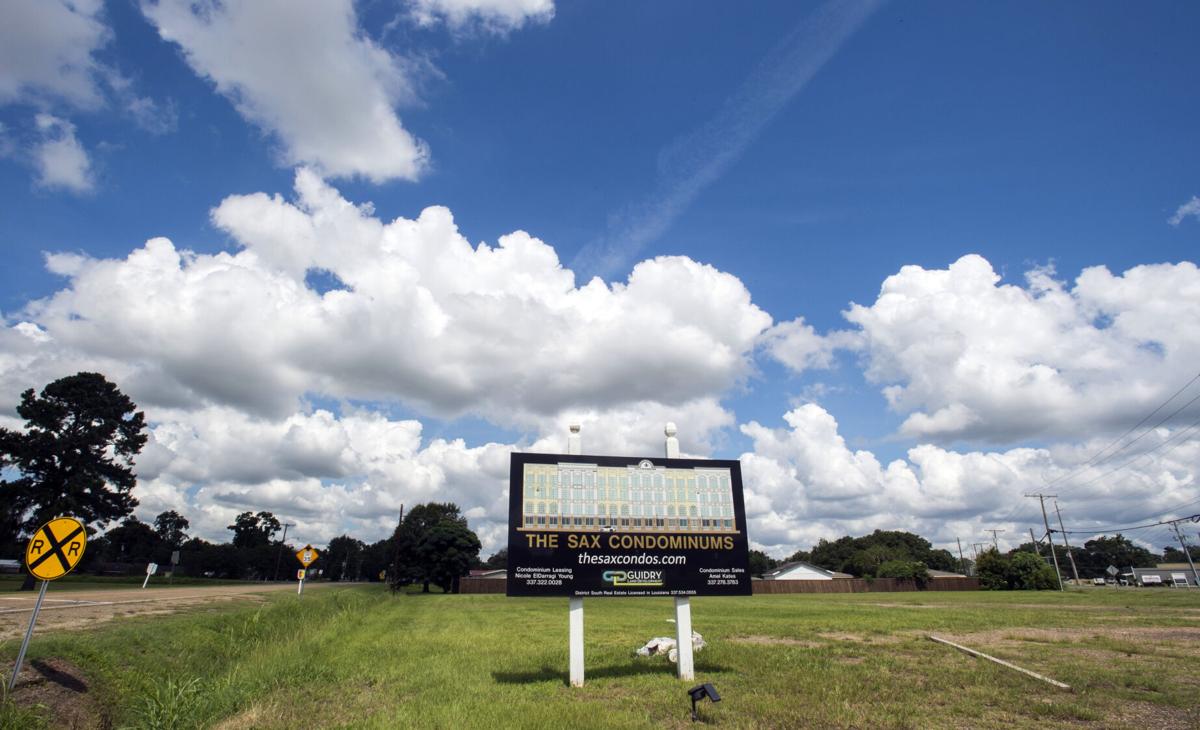 A sign displaying information about The Sax Condominiums stands at the intersection of East Main Street and East 2nd Street Thursday, July 1, 2021, in Broussard, La. 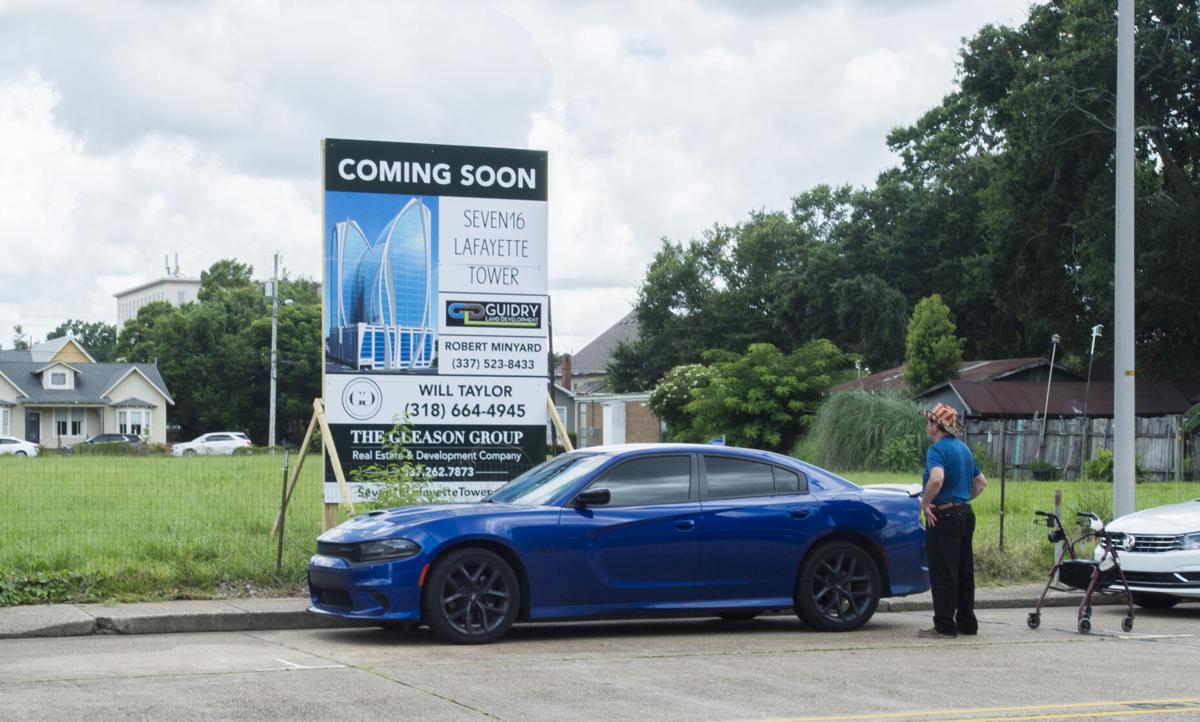 A man stops to read the informational sign about Seven16 Lafayette Tower Thursday, July 1, 2021, on Lafayette Street in Lafayette, La.

Borrowing hundreds of millions of dollars to build multiple towers in different states at the same time would seem a risky bet for many developers, especially those lacking high-rise experience. Lafayette subdivision developer Cliff Guidry is doing just that, but he doesn’t consider it a gamble at all.

Guidry is the face of tower projects in Lafayette and Orange Beach, Alabama, that, for now, exist only on paper. But it’s a no-risk, all-reward proposition for Guidry because he isn’t putting up any of his own money from the outset.

After selling out the planned 13-story Atlas Condominiums tower in Orange Beach, Guidry put a jolt into Lafayette’s real estate community last month when he unveiled plans for twin 260-foot high-rises on a vacant lot across from the downtown library.

Lafayette's tallest buildings: How do they compare to proposed downtown towers?

The Seven 16 Lafayette towers, named for their address on Lafayette Street, would represent the first downtown high-rise construction in nearly five decades. One prominent real estate agent who attended Guidry’s presentation said it could be the city’s long-awaited “golden-baby project.”

Guidry has never built anything near the scale of what he aims for in Lafayette and Orange Beach. Yet he says he is prepared to guarantee loans in the neighborhood of $200 million for both projects on overlapping construction schedules.

“I’m doing business with some pretty big people, with a capital B. Billionaires. They trust me,” he said in an interview, declining to identify the billionaires.

Guidry holds a contract on the 1.2-acre lot in Lafayette, and a partner will front $2 million if they decide to close on it. Closing will happen only if they sell or lease a minimum of 60,000 square feet, or about half of one tower, in the next two months, Guidry said.

“A big project like this, people would think you have hundreds of thousands of dollars out, but it’s not the case. I don’t have any,” he said. “If we don’t get the sales, we cancel the contract in September and it doesn’t cost anybody anything, except for an exercise.”

Guidry acknowledged Seven 16 Lafayette prices far exceed the current market, but he said he is targeting prestige investors willing to pay extra for the tallest building along the Interstate 10 corridor between Baton Rouge and Lake Charles.

Brushing off questions about his inexperience with high-rises, Guidry noted that he had recently completed a furniture warehouse, office complex and auto dealership, all without prior commercial experience.

“Just because you haven’t done it before don’t mean you can’t. I think I’m living proof of that,” Guidry said.

Guidry’s penchant for grandeur might give him a swashbuckler’s sheen, but he said conservative risk management is the key to his business. Insufficient presales prompted Guidry to back out of a well-publicized project at least once before.

The four-story, 30-unit Sax Condominiums project in downtown Broussard was supposed to honor the city’s late, famous son, jazz musician Illinois Jacquet. Guidry boasted in early 2019 that Jacquet’s family was “blown away” by his plans, which aimed for completion by last summer.

The land remains vacant, except for a sign showing the rendering. Guidry said he hopes to proceed with a scaled-down version in the future.

“That’s a prime example of not pulling the trigger if you don’t have the sales,” he said.

After emerging from Chapter 13 bankruptcy less than a decade ago, Guidry focused primarily on residential subdivisions with financing deals of less than $5 million. His entities have borrowed about $38 million against 18 projects since 2013, according to Lafayette Parish mortgage records. Guidry has executed more than two dozen mortgages since 2013, and paid off more than half of them.

Guidry’s land acquisitions are accelerating as he promotes his tower projects. In the past two months, Guidry and his partners have secured $5 million in mortgages with new land purchases in Youngsville and Carencro.

At the same time, Guidry said, his failures in the historic recession of the mid-2000s forced him to “look at things a lot different.”

“First thing I do is try to mitigate risk because I don’t want to fail and end up where I was,” he said.

Testing the market in real time

An undisclosed number of potential buyers have thus far paid deposits on Seven 16 Lafayette, reserving a total of 20,000 square feet, according to Will Taylor, a broker for the Gleason Group. The $10,000 deposits are fully refundable in the absence of final agreements on specifications.

Reserved space thus far is a mix of condominiums and offices, according to Taylor. Guidry said he is also in talks with a major hotel flag.

Why are retail sales still climbing? People are spending the money they saved during the pandemic

Consumer spending continued to soar in May in Lafayette Parish, with total retail sales topping $600 million for the third straight month for …

Two additional floors of condominiums have been listed between $599,000 to $2.4 million, Taylor said. The minimum listing price is double the maximum demand price for downtown condominiums, according to a 2017 market study commissioned by the Downtown Development Authority.

As for office space, Guidry said he expects leases to fetch at least $50 per square foot, or double the average regional Class A office rate, according to the most recent Acadiana Commercial Outlook. The swankiest offices in south Lafayette typically lease in the $30 per square foot range.

Whatever happens, Guidry’s proposal will test the downtown market in ways a study cannot, said Anita Begnaud, head of the Downtown Development Authority.

“There are people who will pay top dollar to make a statement in this town,” Begnaud said. “Whether or not they feel like putting their money in downtown Lafayette is what I’m interested to see.”

Attorney Jeffery Speer has owned 716 Lafayette St. and surrounding parcels for about 20 years. Speer’s heart condition, along with “many other issues,” have hindered his own development efforts, he said in an email.

MC Bank and Trust foreclosed on the land in September, two months after Speer filed a civil suit claiming the bank enabled an embezzlement scheme that cost his law firm $850,000.

But the bank called off the sheriff’s sale in April, and Speer then moved to dismiss the bank from his lawsuit against three employees, which is still pending in 15th Judicial District Court.

“The deal with Mr. Guidry appears to have resolved our differences,” Speer said in his email, adding that Guidry’s development is in “everyone’s best interests.”

A Lafayette police detective investigated the embezzlement case and forwarded it to the District Attorney’s Office for review, according to a police spokesperson. No charges have been filed.

A new normal in Acadiana real estate? At least for the near future as more records fall

This is starting to seem like a new normal in the real estate market in Acadiana: rising property values, monthly sales total setting records …

Guidry said he met Speer earlier this year through a mutual friend, who requested Guidry’s help in getting Speer out of a jam. Hesitant at first, Guidry said he consulted his architect on the Atlas project, Daphne, Alabama-based Forrest Daniell, who was more enthusiastic.

Daniell did not return calls for an interview.

Speer said he would “happily” avail himself for an interview, and suggested a time, but Guidry emailed a reporter a few hours later to say Speer was “not in good condition” to speak. Speer did not respond to additional attempts to schedule an interview.

Two guys looking up at condos

Asked if he reviewed any data before going in on the Lafayette project, Boihem said he relied on advisers.

“I had my people that’s on my staff look at everything, and they gave me the thumbs-up,” Boihem said.

Guidry said he and a friend, Harry Hover, conceived Atlas Condominiums while vacationing in Orange Beach last summer. They fantasized about owning one of the condominiums surrounding the beach.

“I said, 'Well, I can’t afford a condo, but I can build a project and maybe get one for free,' ” Guidry recalled. “Isn’t that crazy? That’s how it happened. Two guys with their families sitting on a beach, looking up and seeing condos.”

Hover said he grew close with Guidry over the past decade, as he and his wife loaned Guidry money for down payments. Public records show Hover’s wife loaned $1.25 million to Guidry, who has paid nearly all of it back with interest.

Hover, a retired oilfield trucker, said he needed creative investment opportunities because he is bad at the stock market. Guidry filled that need.

“The more I was around him, the more opportunity there was for me as a private investor,” Hover said. “He had his numbers to the tee. He’s just brilliant on numbers.”

All 38 Atlas units sold in less than half a year, representing $66 million in sales, according to Guidry. The presale bonanza emboldened him to push ahead with the Lafayette project, which he said he knows he can do “because I did it for Atlas.”

Building permits for Atlas are not yet secured, but rooms at an adjacent hotel are booked for a groundbreaking party next month.

“In my mind, it’s already been built, and moving on to the next one,” Guidry said.