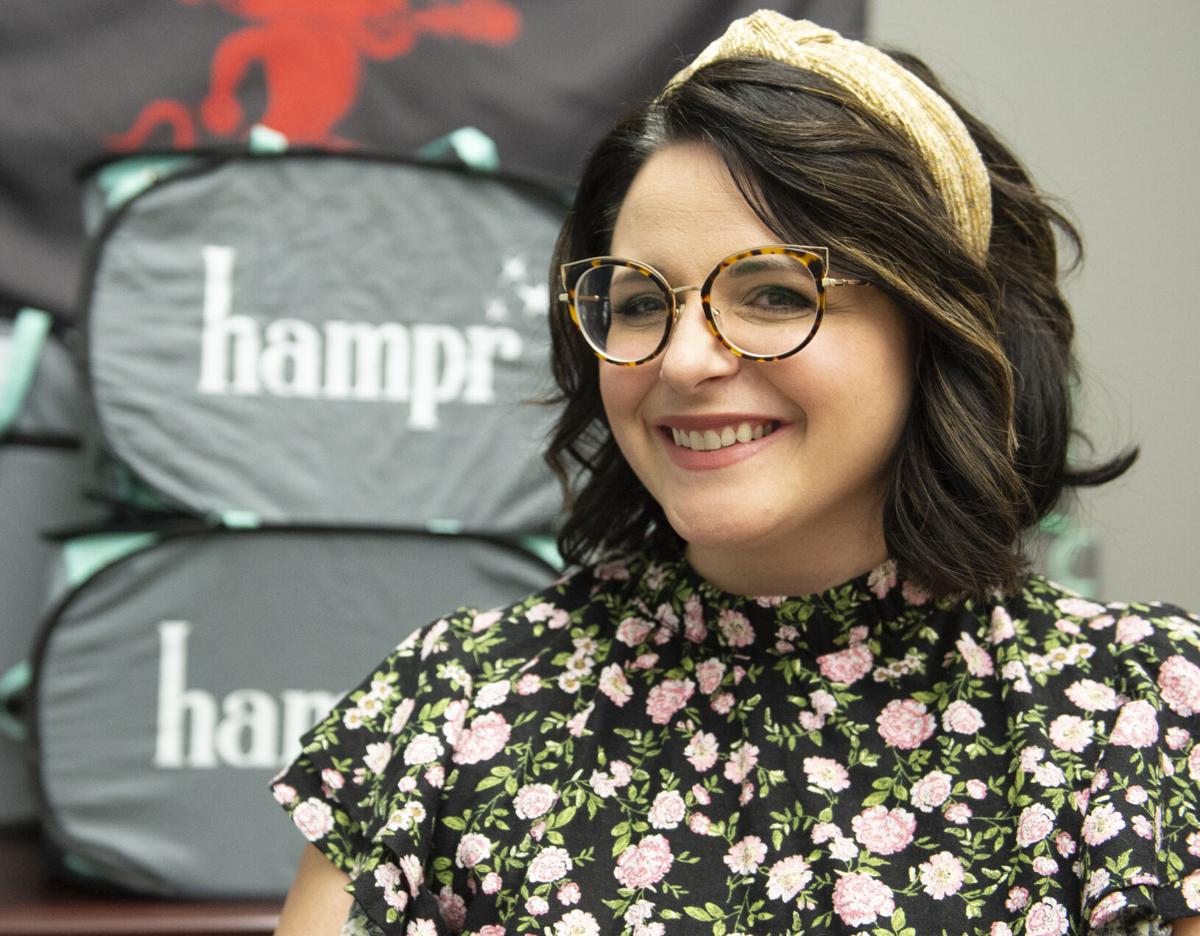 Founder Laurel Hess is pictured at Hampr headquarters, located within the Opportunity Machine, on Wednesday, November 18, 2021, at the LITE Center in Lafayette. 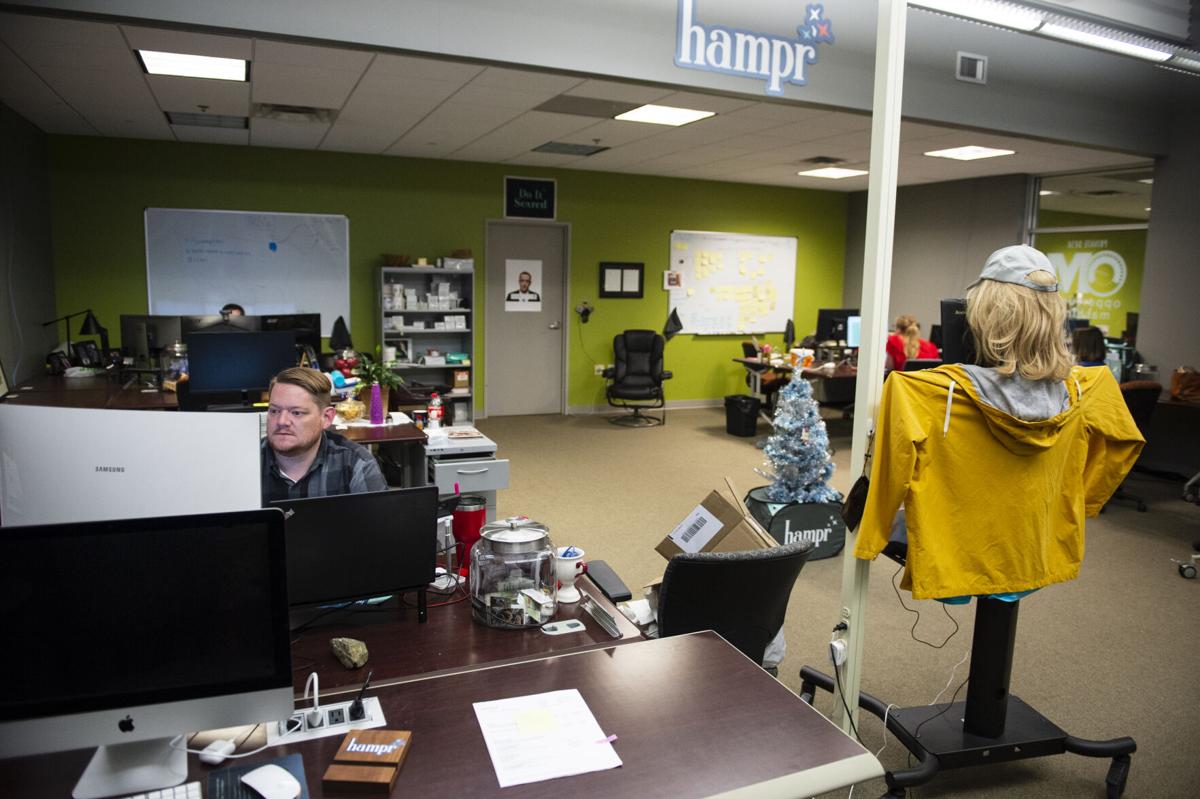 Jeremy Dotson works from his desk at Hampr headquarters located within the Opportunity Machine on Wednesday, November 18, 2021, at the LITE Center in Lafayette. 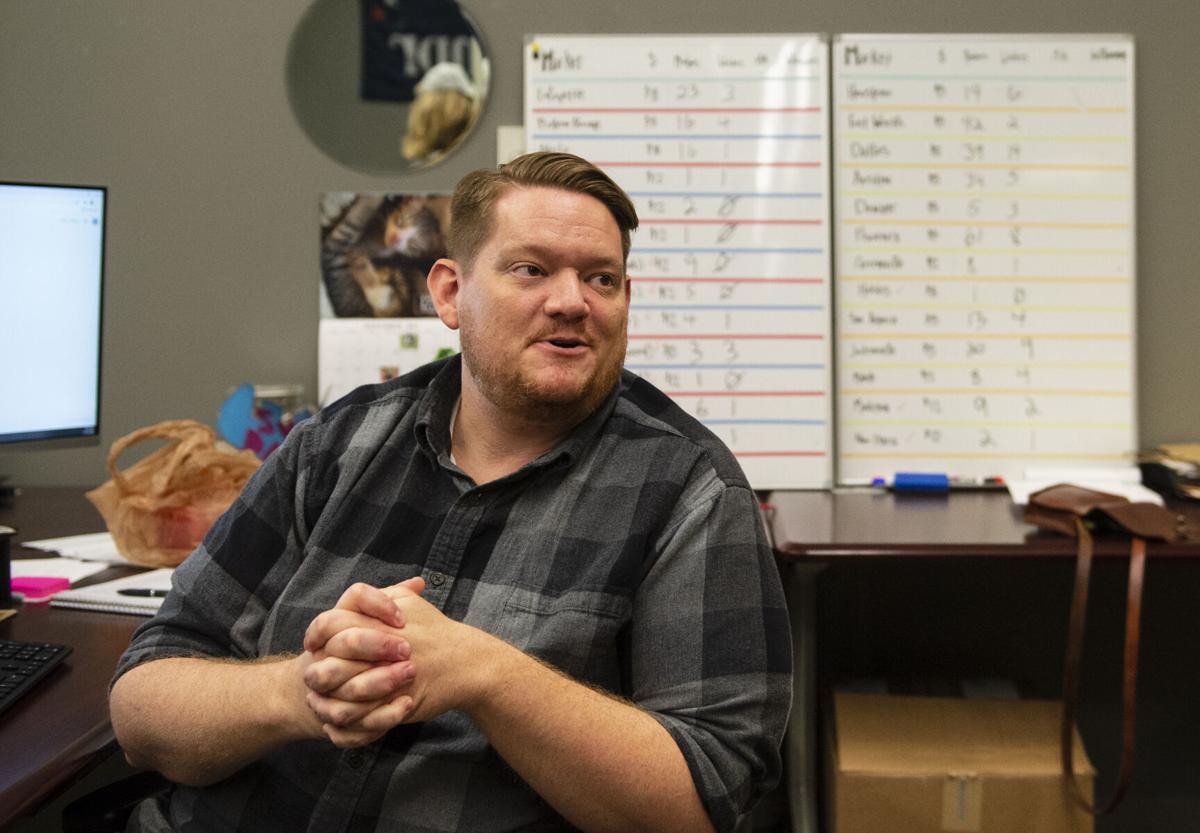 Jeremy Dotson is seen at his desk at Hampr headquarters, located within the Opportunity Machine, on Wednesday, November 18, 2021, at the LITE Center in Lafayette.

Founder Laurel Hess is pictured at Hampr headquarters, located within the Opportunity Machine, on Wednesday, November 18, 2021, at the LITE Center in Lafayette.

Jeremy Dotson works from his desk at Hampr headquarters located within the Opportunity Machine on Wednesday, November 18, 2021, at the LITE Center in Lafayette.

Jeremy Dotson is seen at his desk at Hampr headquarters, located within the Opportunity Machine, on Wednesday, November 18, 2021, at the LITE Center in Lafayette.

Go ahead and laugh. By now Jeremy Dotson has grown accustomed to it.

One of his biggest passions in life? Doing laundry.

But it comes naturally. His mom was into laundry. So was her mom. And when an advertisement from an upstart company that sought people to apply for a job of washing other people’s clothes at home, he applied. Nevermind that the company had no employees at the time. Here was a chance to get paid for what he enjoyed doing.

“I wasn’t looking for a second job or a side gig or anything,” said Dotson, who spent 23 years in retail. “I was already going to be home. It was my dream come true. I don’t mind doing laundry.”

Dotson was the first hire for hampr, an app-based, on-demand laundry service that started in Lafayette nearly two years ago. Now he’s a manager, overseeing about 500 "washrs," or washers, in a company that has grown faster than just about anyone could have imagined. Hampr is now in 27 markets across nine states with more than 4,000 customers, referred to as members, and is on pace to do about $1.7 million in revenue this year.

It's an idea Laurel Hess with Rally Marketing came up with after ordering groceries through Shipt and wondering why a similar concept didn’t exist for laundry. The business that launched in January 2020 now could emerge as the latest shining star among Lafayette startups — think Waitr about five years ago — after it landed a large investment from Benson Capital Partners of New Orleans and TechStars Austin accelerator program.

The company is now using its model of keeping its costs low — much like Uber but for laundry — while utilizing an untapped workforce of stay-at-home adults who don’t mind washing other people’s clothes.

“Really, it’s an endorsement of Laurel herself,” said Mike Katz, managing director of Benson Capital Partners. “In the same week, there were three or four people reach out to us and say, ‘You have to meet Laurel Hess.’ She’s just a force and is politely persistent. She doesn’t take no for an answer but with a huge smile on her face while she does it.

"It’s really reflective of the company. We love her as an entrepreneur, but what we really love is the results she’s generated. And that’s where the company’s traction has been just so impressive in the way they’ve done it so cost-effectively.”

The model is surprisingly simple. Unlike other companies that started by purchasing a laundromat or equipment, hampr utilizes others who have the equipment to do the washing and drying for those who need it A matchmaking system, if you will.

Customers can buy an annual membership for $39, and that includes four hampr-branded laundry containers they can place outside their front door for pickup. They scan in the code, and a "washr" picks it up, washes, dries and folds the laundry and returns it to the customer for $10 a load.

“I had this stay-at-home mom friend who was always asking me what kind of things she could do for my marketing company,” Hess said. “I’m like, you could do my laundry. I never asked her to do that, but the thought was you have this untapped workforce who cannot leave the home for long periods of time that could be contributing to their household income by washing clothes. That was the genesis of hampr.”

The concept also benefitted from other tech companies before it, such as Uber and Airbnb, said Kyle “Skip” Boudreaux, managing director of Lafayette-based Acadian Capital Ventures.

The main risk was once technology wise: Could the app be built for this? Now that the technology is available, the risk is more market-based: Would people be willing to get in a stranger’s car to get somewhere or stay in a stranger's house instead of a hotel?

“I remember when I first looked at hampr and my wife said, ‘I don’t want anyone washing my laundry,’” Boudreaux said. “But you may have said, ‘I’m not going to stay in other people’s houses.’ We use it. We’ll just do the kids’ clothes, and just that reduces the stress in our life. We stopped caring that a stranger is doing it and glad it’s getting done.”

Hampr one of 10 chosen for TechStars Austin accelerator program

Hampr, an app-based wash-and-fold laundry service launched last year, was accepted into the 2021 class of the TechStars Austin accelerator program.

The growth of members and washers has been steady as the company has expanded into other markets, mostly suburban areas in larger markets where they are large numbers of families along with potential washers, Dotson said. The company gets about 20 applications a day from people interested in being a washr, more than twice the amount of a year ago, thanks to an active presence on Facebook, Instagram and TikTok as well as about 60 social media influencers.

In some areas, the washers are getting plenty of work. One woman in the Dallas-Fort Worth metro, Dotson noted, got so many hampr jobs she was able to quit her regular job.

“The possibilities are endless of what we can do,” Dotson said. “We’re hoping to have regional washers managers that can manage the washers by region. The goal is to get the washers promoted and keep it in the family. We’re small, and I have faith we’re going to have more people helping us in the future. We’ll just keep growing, and that’s the fun part.”

The company has markets identified for expansion but, as Dotson noted, even other services, including possibly putting a member’s clothes away or possibly closet organization. In the life of a startup, Boudreaux noted, hampr is just getting started.

The company has benefitted from a startup ecosystem in Lafayette that has also produced Something Borrowed Blooms and FlyGuys, two other Lafayette startups that have grown significantly in recent months as well as former tech staff from Waitr, thanks to co-founder and chief technology officer, Ryan LeBlanc.

“I’ve never launched a company before like this,” said Hess, who left her job with Rally Marketing in March to work full-time with hampr. “We’re like building the plane as we’re flying it. I’ve never looked at a capitalization table before, and I’ve never raised funds before investors, and I had to learn all that. I’ve just never been afraid to ask questions and look stupid, and I think that helps because no one knows all this stuff.

“One day I was going to a pitch competition and my heart rate was through the roof. I remember stopping myself and was like, ‘What are you freaking out about?’ I was like, because I care so much. If I care this much, I’m the only one who can run the company. Because I care a lot.”