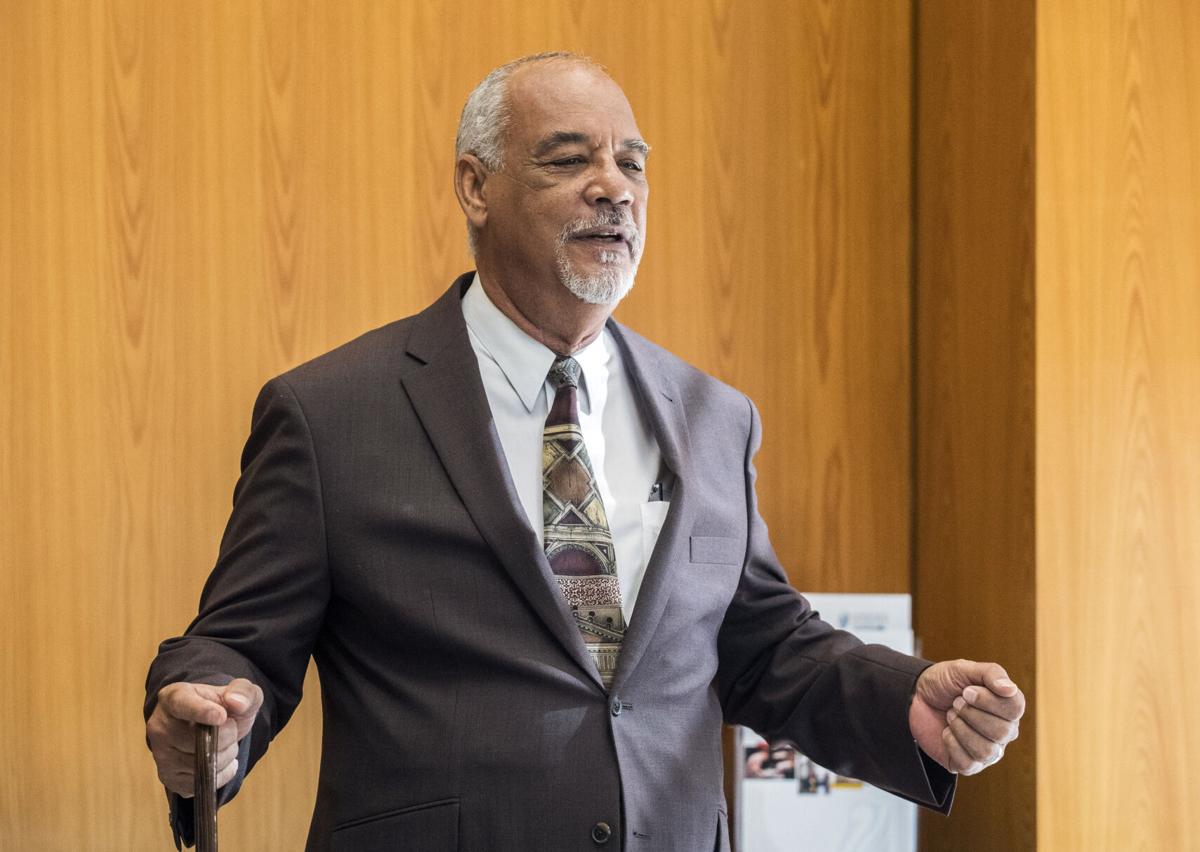 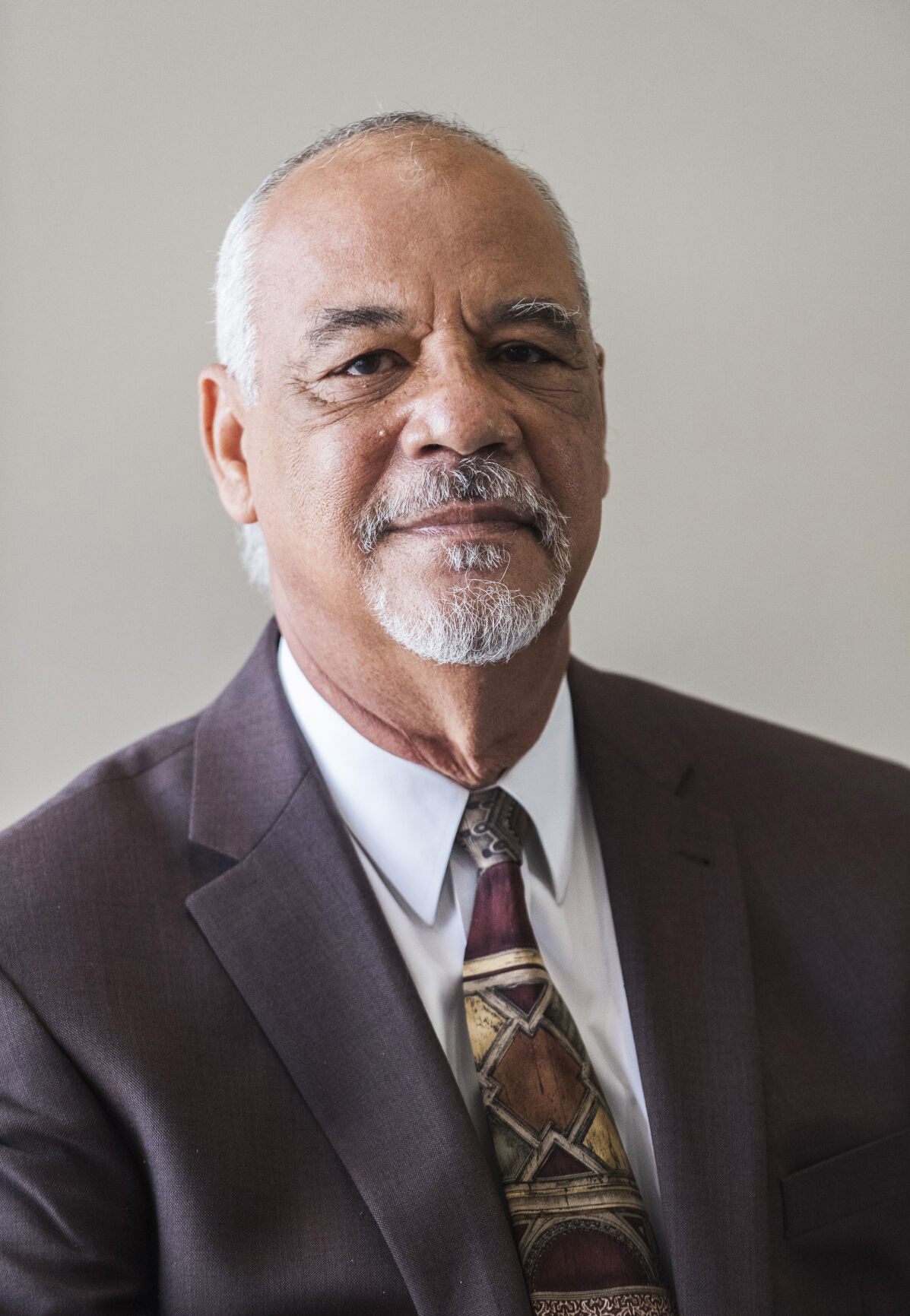 Fred Prejean, the 2020 Civic Cup honoree, is pictured Monday, October 19, 2020, at the Community Foundation of Acadiana in Lafayette, La. 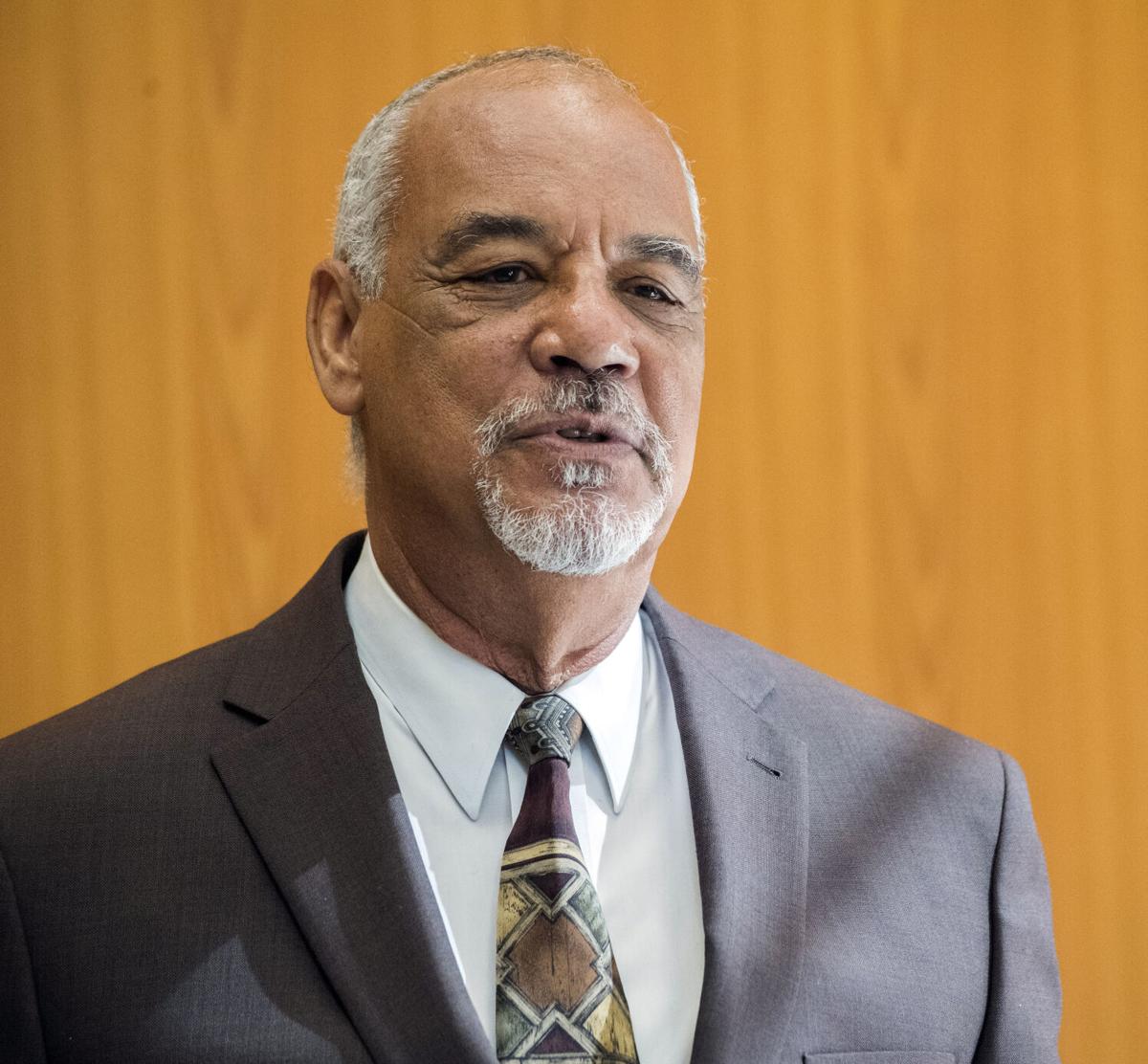 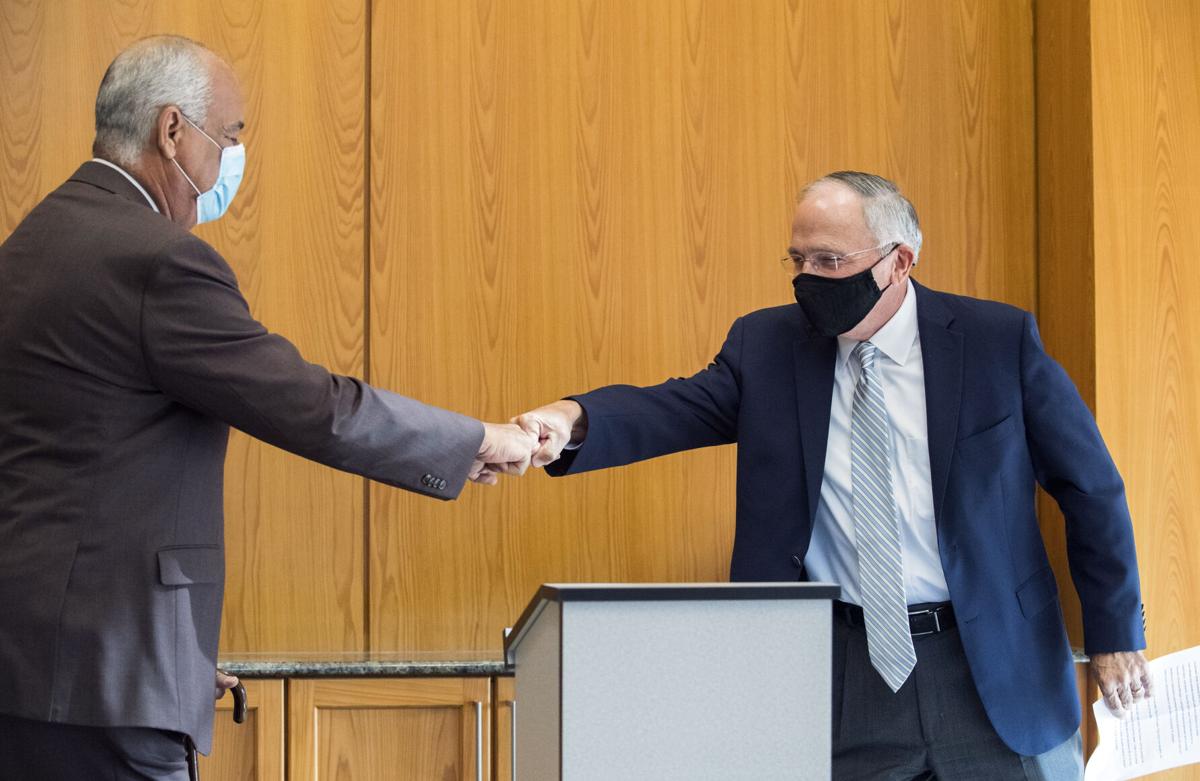 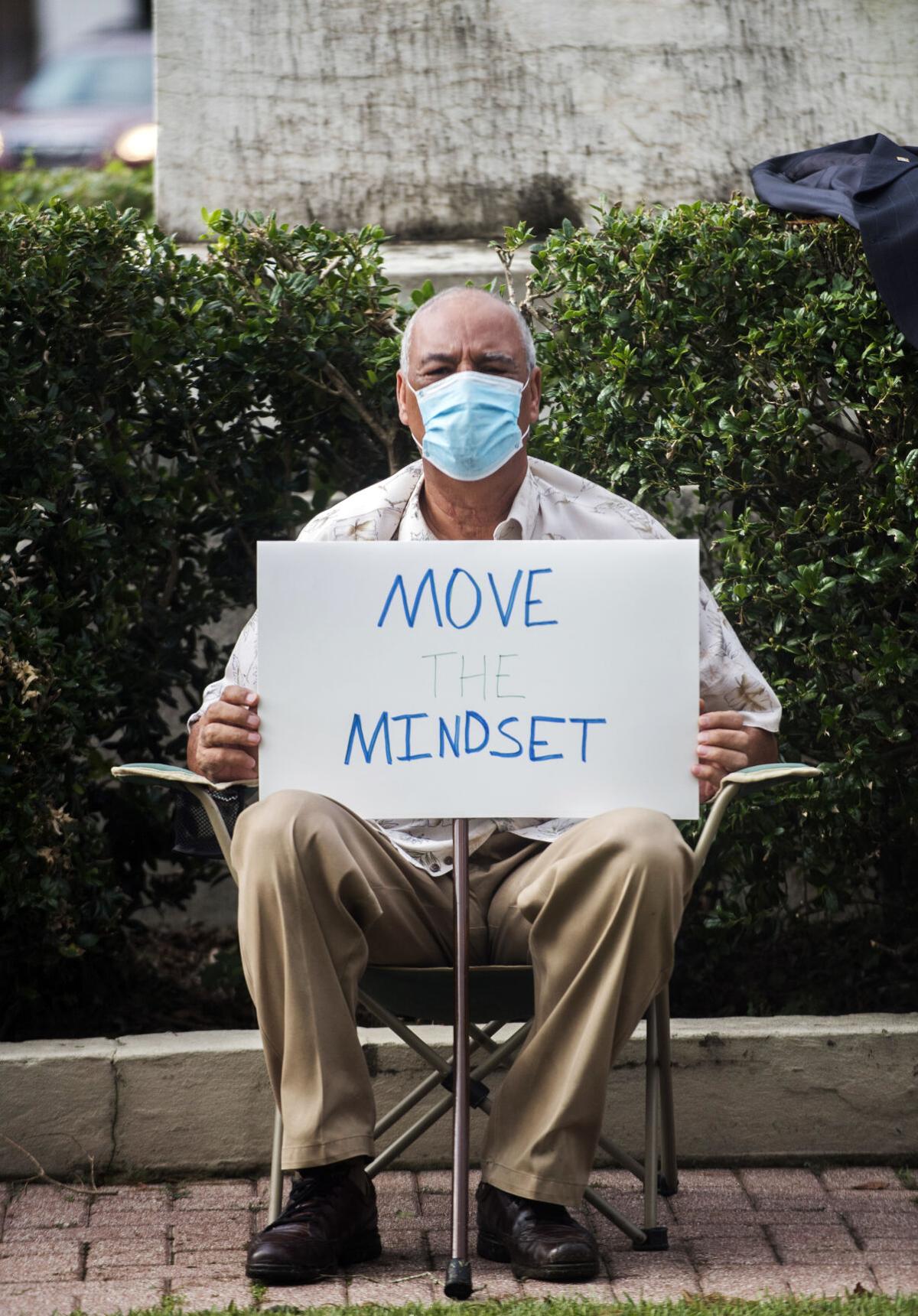 Fred Prejean, president of Move the Mindset, sits with his back to the Alfred Mouton statue during a demonstration calling for its removal Monday, October 12, 2020, in downtown Lafayette, La.

Fred Prejean, the 2020 Civic Cup honoree, is pictured Monday, October 19, 2020, at the Community Foundation of Acadiana in Lafayette, La.

Fred Prejean, president of Move the Mindset, sits with his back to the Alfred Mouton statue during a demonstration calling for its removal Monday, October 12, 2020, in downtown Lafayette, La.

When Fred Prejean’s mother, Edolia, used to walk him past the Alfred Mouton monument in front of the old Lafayette City Hall, he’d ask who that towering figure represented. His mother, usually communicative, would grow tight-lipped, he remembers.

“She had so little to tell me,” he recollected Monday, after he was introduced as the 2020 Civic Cup recipient at the Community Foundation of Acadiana building. “I came to realize that my mother’s shortage of an explanation resulted from her being intimidated by that statue.”

His mother was but a child — just 7 — when the statue was erected to great local fanfare in 1922, a nod to the legacy of a Confederate hero from Opelousas slain in action at the Battle of Mansfield in 1864. Prejean said that monument was unveiled in an era of harsh segregation in Lafayette; he said it came a year before a Lafayette city ordinance dictated that black people could live only north of the railroad tracks downtown. That marked the establishment of North Lafayette as a segregated black neighborhood.

Prejean has spent much of his life pushing back against segregation and racial animus in his native city. He was born in 1946, an older Baby Boomer, in a year when Paul Kurzweg was awarded the Civic Cup. Most recently he has established and helped lead “Move the Mindset,” an effort to move the Mouton away from its perch on public property in downtown Lafayette.

That effort and his long career that included community organizing and establishing local cooperatives was cited Monday in his selection as the Civic Cup recipient. The award will be made at a 6 p.m. Nov. 10 dinner at the Petroleum Club.

He said he was informed recently of his selection as Hurricane Delta approached the Gulf Coast — he was filling sandbags — and immediately thought of how proud his parents would have been. She and his father, Oran Prejean, raised their children in St. Paul’s Catholic Church in Lafayette; he graduated high school at Holy Rosary.

Prejean said he was a typical high school student who played sports at Holy Rosary. But his awakening to the civil rights movement came in the summer of 1963, when the Rev. Albert McKnight drove Prejean and his brother to the nation’s capital for the Rev. Martin Luther King Jr.’s March on Washington.

“For a person from Lafayette to go to D.C. was mind blowing,” he said. “There were no hotels available but Father McKnight knew a priest in D.C. People slept on mattresses in the church school. They went to rally the next morning.”

“I saw Martin Luther King Jr. live. I saw Rosa Parks live. I saw John Lewis live. I saw them all live. I can still remember Joan Baez singing. It changed my life.”

The set up was perfect, Prejean recalled, with speakers placed so that the 250,000 in attendance could hear every word — “especially Dr. King. You could hear a pin drop when he spoke.”

Prejean served six years in the Marine Reservices and graduated in accounting at Southern University.

Eventually, he put to work the training in community organizing that he gleaned from a variety of civil rights organizations, including the Southern Christian Leadership Conference and the Student Non-Violent Coordinating Committee.

Projects that he led or in which he participated included establishing a holding company to provide low-income loans to the poor and establishing a subsidiary for a bakery. He also became involved with poor farmers in Sunset, where sweet potatoes were a main crop. He said farmers had to bring their produce to a market broker who treated Black farmers unfairly. So he helped farmers establish their own marketing operation, trucking sweet potatoes up North for sale.

Move the Mindset’s work to move the Mouton monument off city property may come to fruition soon. Mayor President Josh Guillory in July expressed his intention to move the memorial; Prejean said he has never met nor spoken with Guillory but believes Move the Mindset’s educational work had an effect on the first term city-parish leader.

He said the Mouton monument was the sole remaining one to the Confederacy on public land in Lafayette, although there are still streets in the city named for Confederates. He doesn’t accept the Confederacy’s defenders who wish to keep such markers up; he said the Confederates were “traitors” unworthy of remembrance.

Prejean also said he’s got new projects in his sights. One is to improve five predominantly black public schools where students are operating below grade level. “Why are these kids not getting the best education?” he asked.

A second project would be remembrance of Black Louisianians who died from lynchings, including six who were lynched in Lafayette Parish: two in Lafayette, two in Carencro and two in Broussard.

He said Move the Mindset is working with the Equal Justice Initiative to place markers in appropriate places to remember those who died between the end of Reconstruction in 1877 and 1950.

“We are well on our way with that project,” he said.

Important, he said, is to place markers at suitable locations where they can be seen by Black and White people.

“We’re not going to stick the markers in a Black neighborhood where White people never travel,” he said. “These are things that everyone in our community ought to see. Until we know our history and learn and acknowledge what has taken place, reconciliation cannot occur.

“Our education project is focusing on teaching people about the lynchings, where they took place. We have the stories about the circumstances that go with each lynching. When people see the markers, they can understand.”

He said he understands the city’s history and wants other to understand, too. He insists he is forthright in presenting lessons on racism but he doesn’t intend to be offensive.

Prejean said many young people — generations X, Y and millennials — have no ideas about segregation, although their public activism this year shows they are “perceptive about a lack of justice.”

He said he’s getting ready to let the next generations take over the causes he’s championed.

“I tell young people, the baton is handed over to you.”