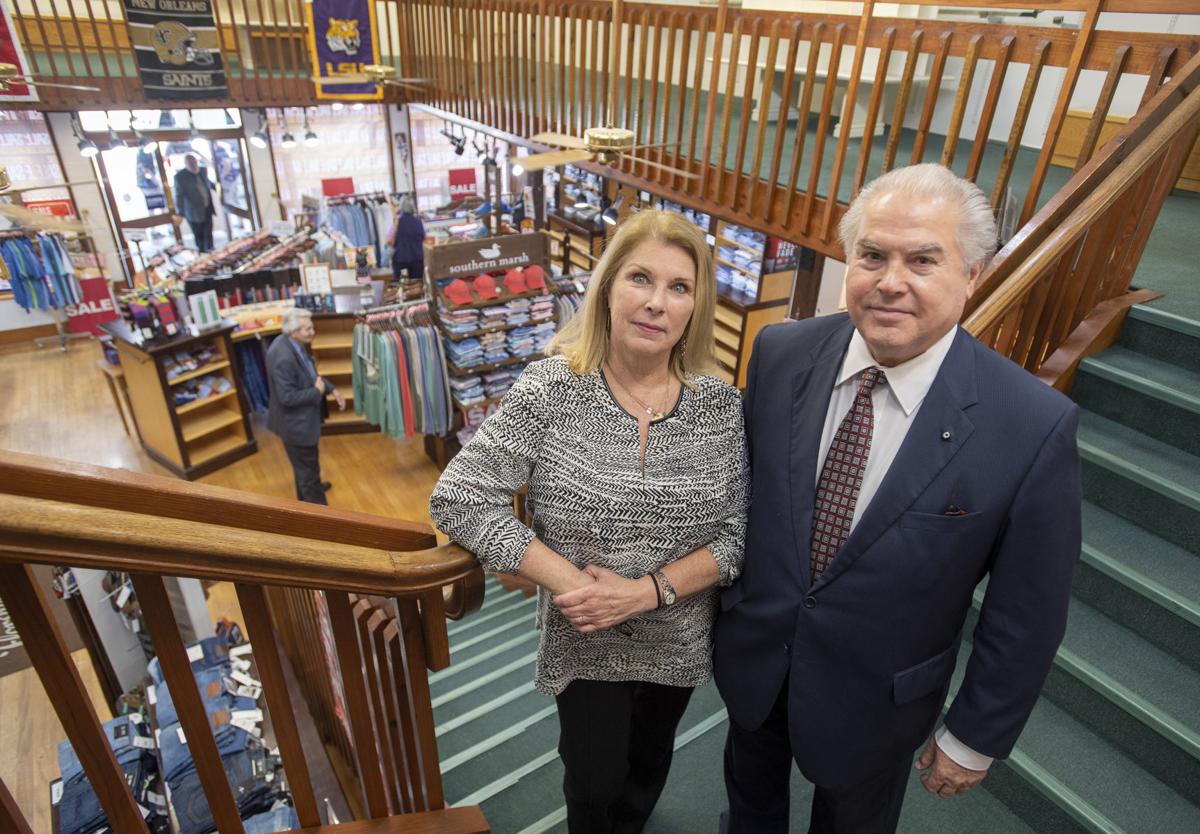 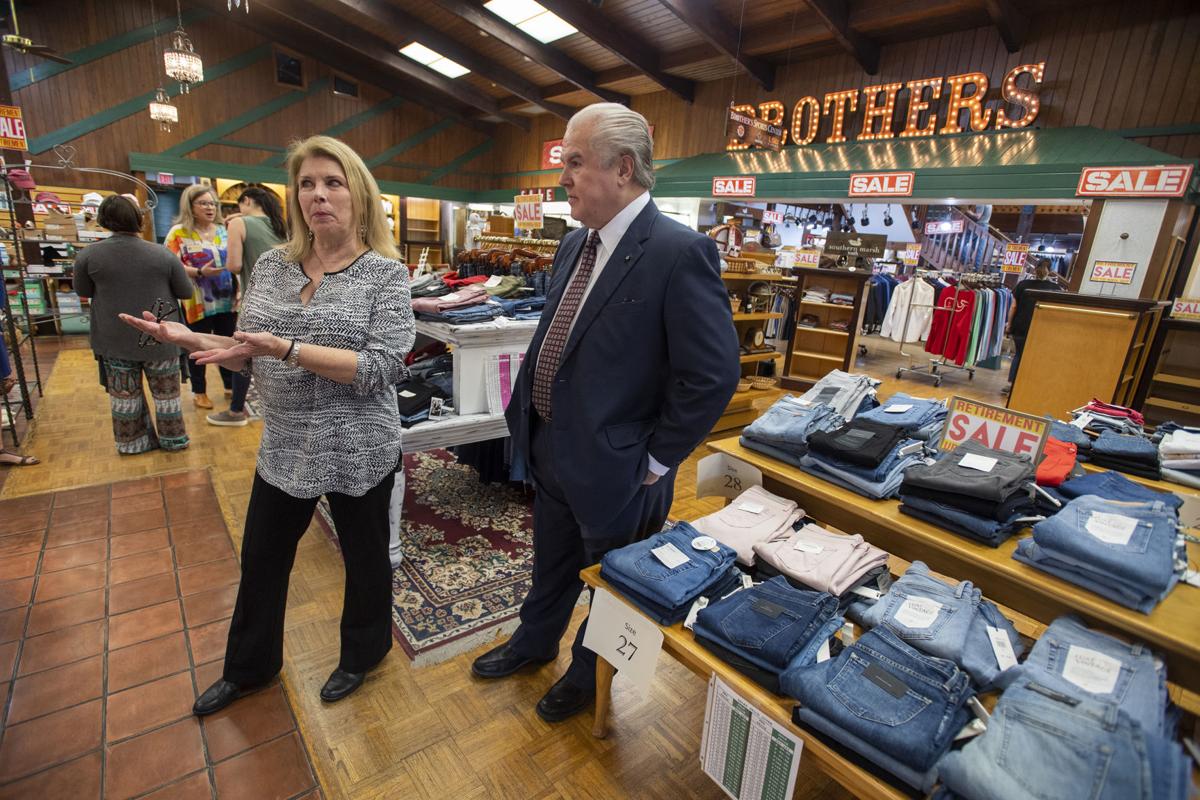 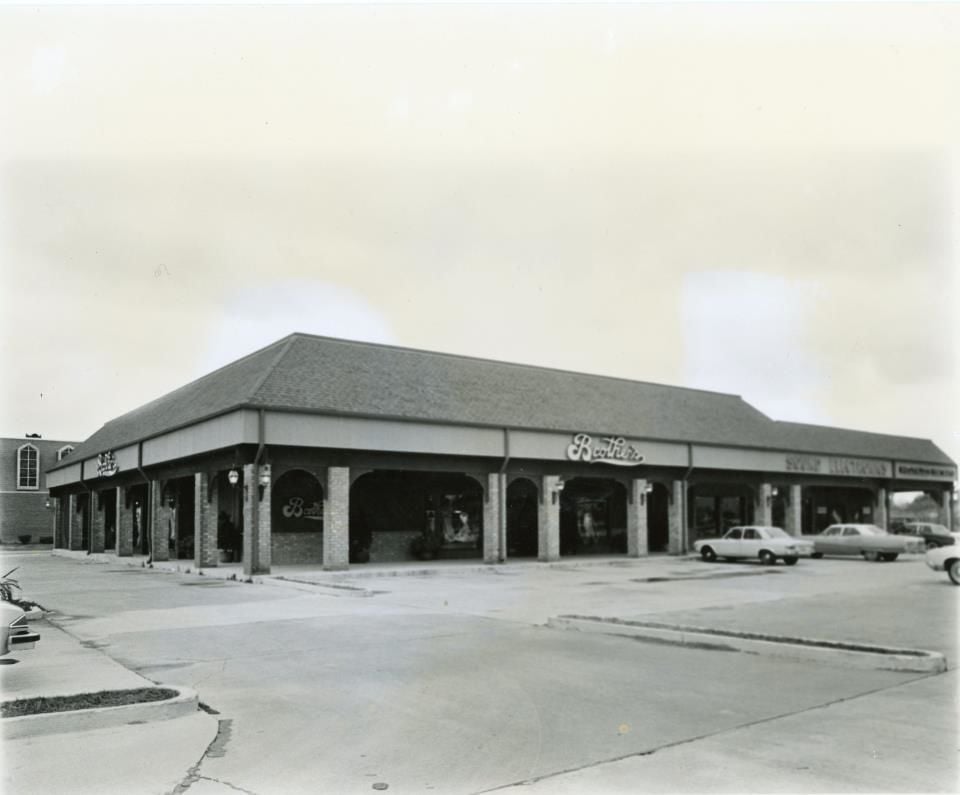 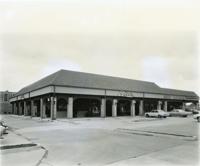 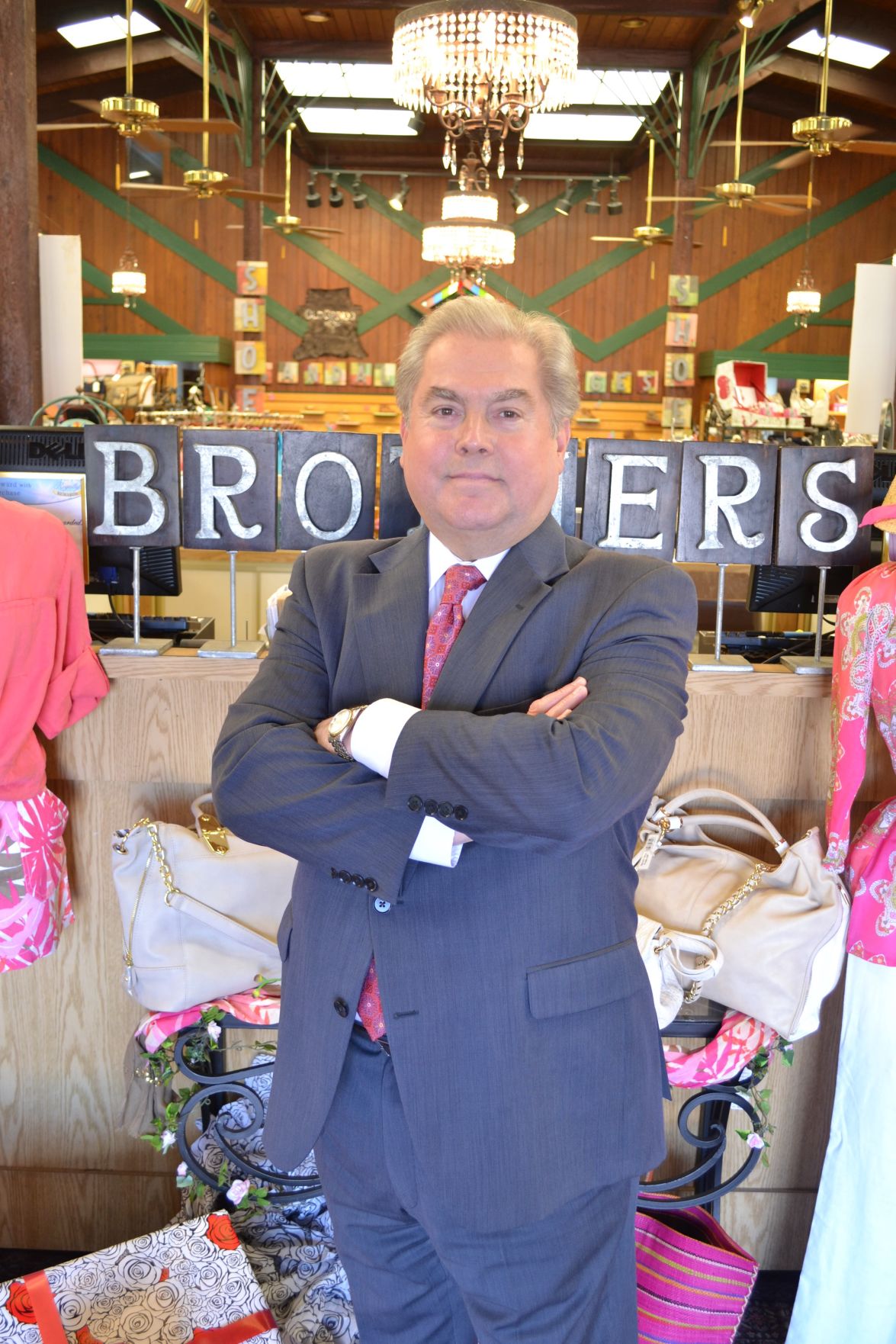 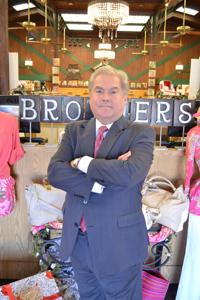 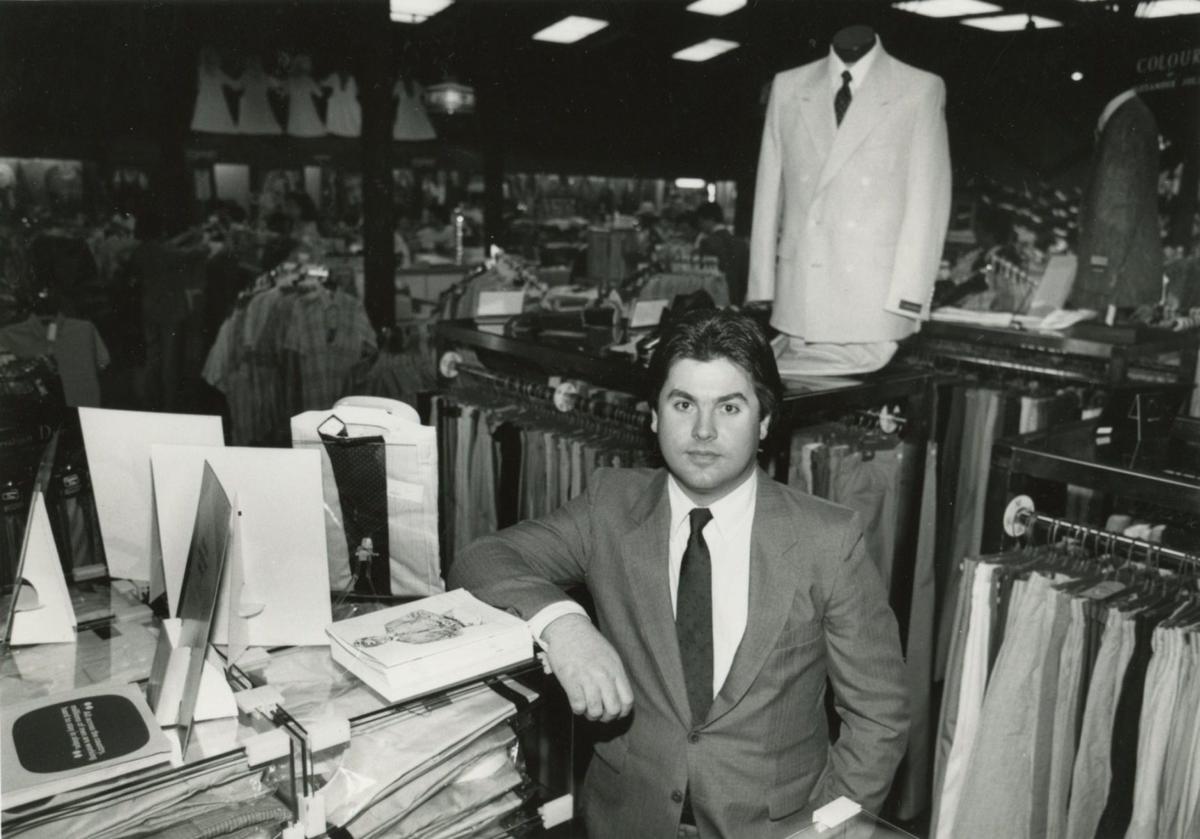 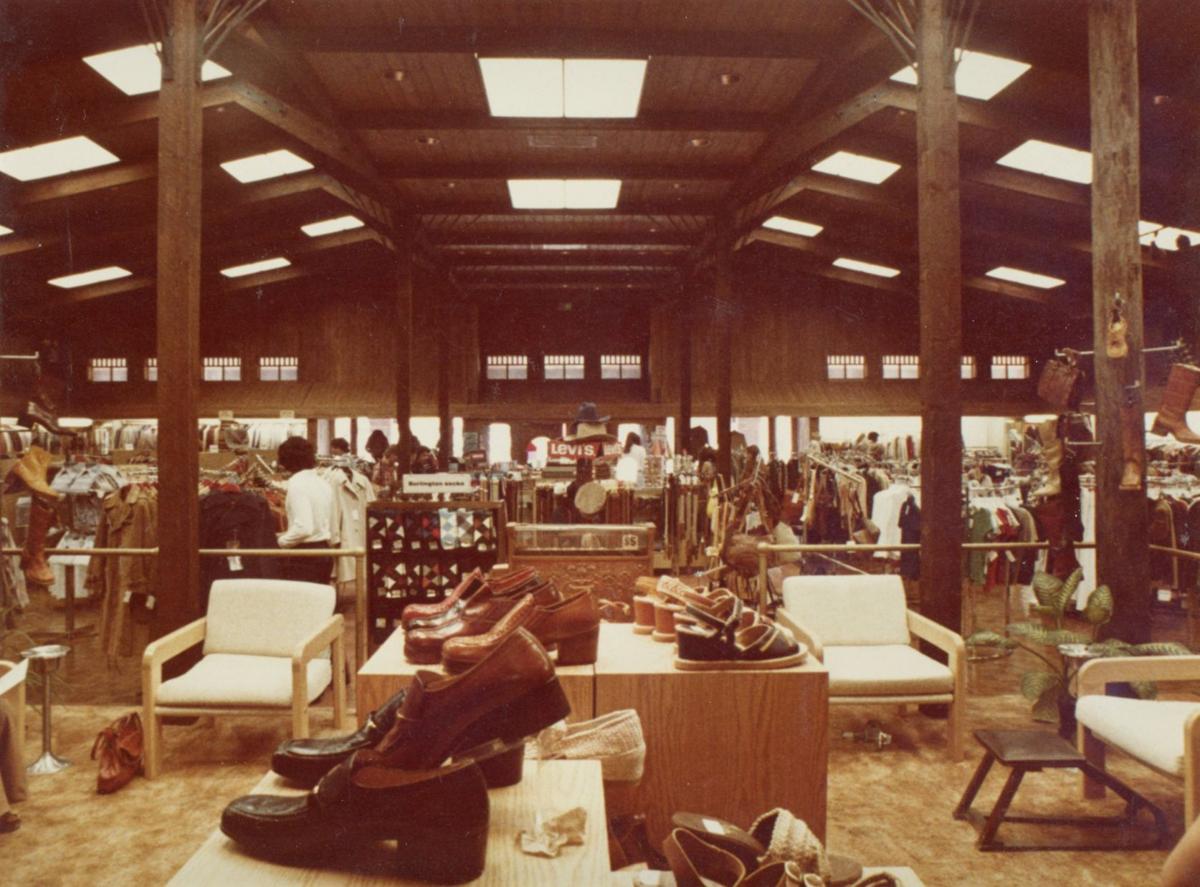 When it comes to memories at Brother’s on the Boulevard, Ed and Catherine Abdalla recall mostly high points.

The two were married but a year — they are both 67 now — when the store opened at 101 Arnould Blvd. in Lafayette in 1976, the fruition of a longtime dream for the Abdalla family. Come December, the couple expects to end their 43-year run at the popular clothing store, which has dressed generations of local professionals.

“I don’t know if we can make it,” Ed “Brother” Abdalla IV said the week after announcing the store would close Christmas Eve. “We’ll be in business as long as we have merchandise.”

He said the Sept. 17 announcement launched a four-day buying frenzy at the 10,000-square-foot store, and he’s uncertain if Brother’s will keep enough stock on the racks and shelves to last another three months. He said Sept. 21 may have been the store’s busiest day ever.

Abdalla, who underwent back surgery in the spring, said that lingering physical challenges may have convinced him to put the retail business aside. He hurt his back at the store about eight years ago, and the pain has plagued him since, leading to surgery in Houston.

He and his son Adam will instead focus on the real estate side of the family business. The family owns 26 store fronts in the Brother’s shopping center, On the Boulevard, south of Arnould; everything but the bank. Only one storefront was vacant recently, but Brother’s on the Boulevard will leave a substantial hole when it closes.

Catherine — Ed concedes that she’s the smarter of the two — and Ed Abdalla grew up in the business. He was born into the family of longstanding Acadiana merchants. The two met at Cathedral Carmel High as students and married young. Catherine worked at two of the Abdalla family stores before they married, so she knew from the outset of their marriage that their lives would be spent on a hectic retail schedule.

But they’ve been blessed, both said, in their marriage, family life and their prosperity.

The Abdalla family has been part of Acadiana business for some 12 decades, since Edward Abdalla took up a peddler’s trade near the St. Landry Parish town of Washington around 1895. Later, he established himself in a standing store in Opelousas. The family eventually did business there, in New Iberia and in Lafayette, where they opened a department store downtown on Jefferson Street.

Abdalla’s Uncle Herbert, father Edward Abdalla III and mother Irma continued the family business downtown and later with stores at the Oil Center and then at the Acadiana Mall. Ed said Brother’s on the Boulevard was his idea: He said most of Lafayette’s growing residential population in the 1970s was located on the city’s south side while its lone shopping center, Northgate Mall, was located on the north side.

He thought a south side site might present an opportunity. He said his family bought up homes for sale in Arnould Heights subdivision, the site of the current store, until they could clear it and open the shopping area.

From the outset, he said, Brother’s succeeded. The store was named after young Ed, using the nickname he’d acquired as a toddler. His sister Carolyn, 5 years old when he was born, couldn’t readily pronounce his name, so she called her infant brother “Brother.” The name stuck.

Brother’s on the Boulevard was conceived as a young person’s clothing store. The store’s stock and clientele grew and matured as the years passed until it served people of all ages. Clothing tastes of those initial customers who flocked to Brother’s developed with emerging fashions, he said.

The store itself was built with architectural traits inspired by a local popular store, Shoe Lodge, in Lafayette. Typography for the Brother’s sign that adorned the store front was modeled after that used on the record albums of ‘70s rock group Chicago; it wasn’t until the 1990s that the button was added to replace the “O” in the Brother’s on the Boulevard name. That was the inspiration of George Graham, the couple said.

Abdalla said that initially, the location was not isolated — the city was extending southward — but the area hadn’t been settled long. Alesi Pizza House on U.S. 167, he noted, opened two decades before, when he was a child. When his father would take the family there in the ‘50s, it was “way out of town” on gravel road, he recalled.

Cal’s Western Wear, built nearby around the same time, was so rural people might ride on horseback to that store. But south side development was coming.

Ed said he and Catherine initially lived in Bayou Shadows when they married, then bought a house in Tanglewood when they were expecting a child. Ed had worked for the family store, Abdalla’s, downtown and for the family’s Oil Center location, which was open from 1967 to 2005. His Uncle Herbert operated that location, and Ed worked in the Red Lion shop within. The family also operated a mall shop for 15 years, 1980-96, but moved after giving way to a Disney store that lasted less than three years.

“It’s been kind of a blur,” Catherine said of their long career. But she and her husband noted highlights that over the years included:

Success depended upon numerous factors, among them making the right choices during annual market trips.

“One thing about the fashion market is change,” Ed said. “People don’t necessarily like change, but in retail, it changes every season.”

A second success factor was in dressing the whole family, from grandparents to grandchildren, and retaining customer loyalty. Part of that success came from retaining an enthusiastic sales staff upon whom customers came to rely. Some sales staff moved to Brother’s on the Boulevard from other Abdalla stores; the longest-serving employee, Kathy Theall, passed away this year after working for them for almost 40 years.

At one time Brother’s employed as many as 120 full- or part-time workers between the Boulevard and mall locations. That included a lot of workers ages 16-22 who worked their way through school there, some of whom became professionals who later shopped at the store. In some cases, they conceded, they may have dressed people for their entire careers.

They said seeing longtime customers and former employees since the retirement announcement has generated many emotions, as they’ve approached Ed and Catherine starting conversations with these words: “You don’t remember me but ... .” Sometimes, they don’t remember every name or person, the couple said, but they’ve loved the opportunity to reconnect.

June DeBaillon said her family has done business with the Abdallas dating back to the downtown store. She later shopped at the Oil Center location and finally at Brother’s.

“That particular brick-and-mortar establishment was a jewel for customer service,” she said, which included free wrapping and alterations. “You don’t find that often in this day and time.”

She said she moved from each Abdalla location to the next smoothly. In some cases, trusted sales staff moved with each store and all the locations carried the “same quality and customer service.”

She said the store would search for items for her through buyers and would call or send photos when new items of possible interest would come to the store.

“You couldn’t beat the personal customer service,” she said. “Brother’s was one of the very few businesses if you needed a special accent for a special occasion, they would make that request to their buyers.”

Brother and Catherine made a great team, she said, and routinely attended seminars to keep abreast of fashions.

Other customers have moved away from Lafayette but keep up with the store through digital communications, sometimes ordering online, the Abdallas said. Others visit annually from out of town and say, “I’m glad you’re still here.”

Until December, that is, if merchandise remains.

Then Ed will turn his attention to real estate — he and Adam are already planning upgrades on the property — and toward recovering fully from surgery. Catherine’s focus will turn toward playing with the couple’s five grandchildren.

When it comes to memories at Brother’s on the Boulevard, Ed and Catherine Abdalla recall mostly high points.

Bayside Plantation, a 169-year-old historic property along Bayou Teche in Jeanerette, was recently sold for $775,000.

How I Got Here with Riché's Y-Not Stop co-owner Logan Riché: Weather, gas prices affect sales, but 'our business has grown significantly from last year'

Logan Riché and his wife Kim, own Riché's Y-Not Stop convenience store, 6920 Ambassador Caffery Parkway, in Broussard. A survey from the Natio…

Discover Lafayette podcast with Monique Boulet with the Acadiana Planning Commission: When it comes to new highways or flood control, commission is front and center

Women In Trucking Association has named Dupré Logistics as a 2019 Top Company for Women to Work For in Transportation.