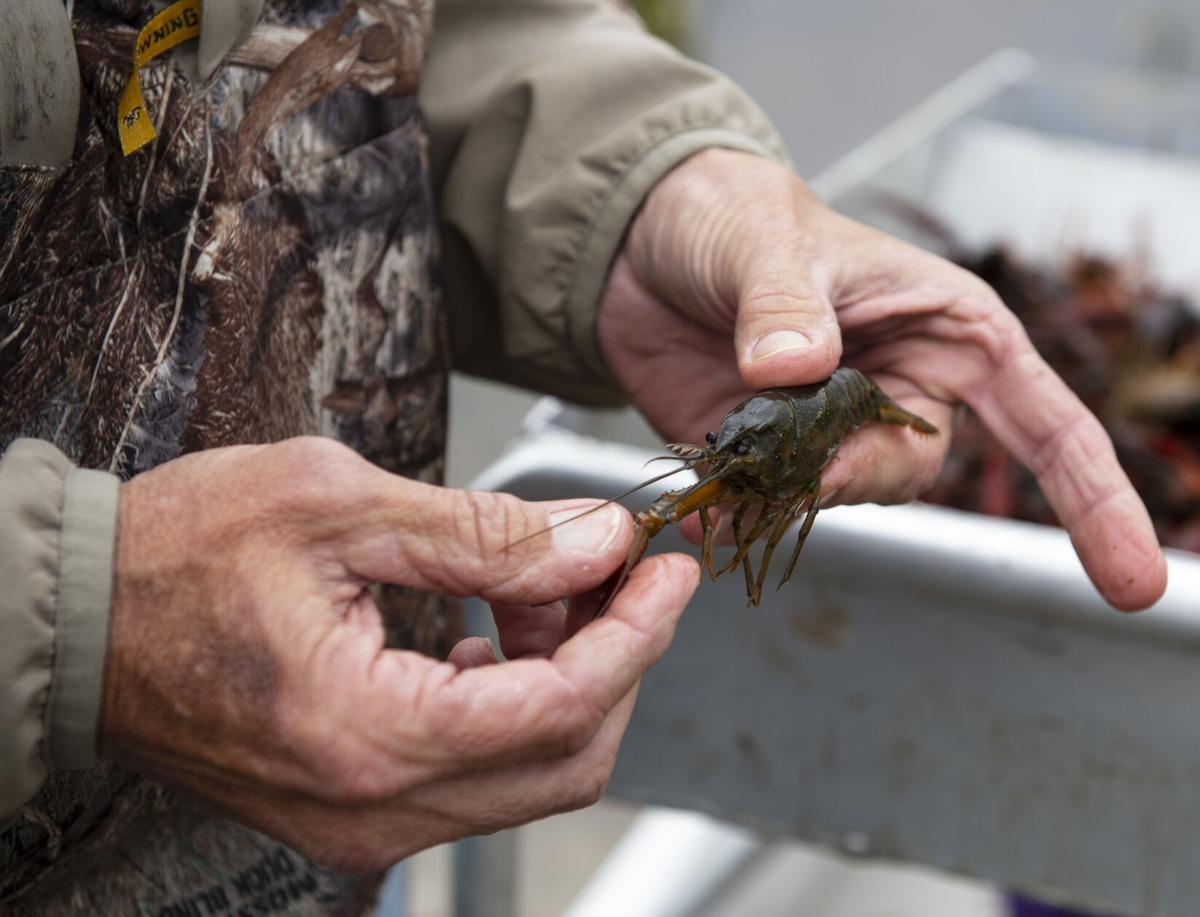 Mark Fruge holds a live crawfish that was harvested earlier in the day on Wednesday, January 6, 2021, at Fruge Aquafarms in Branch. 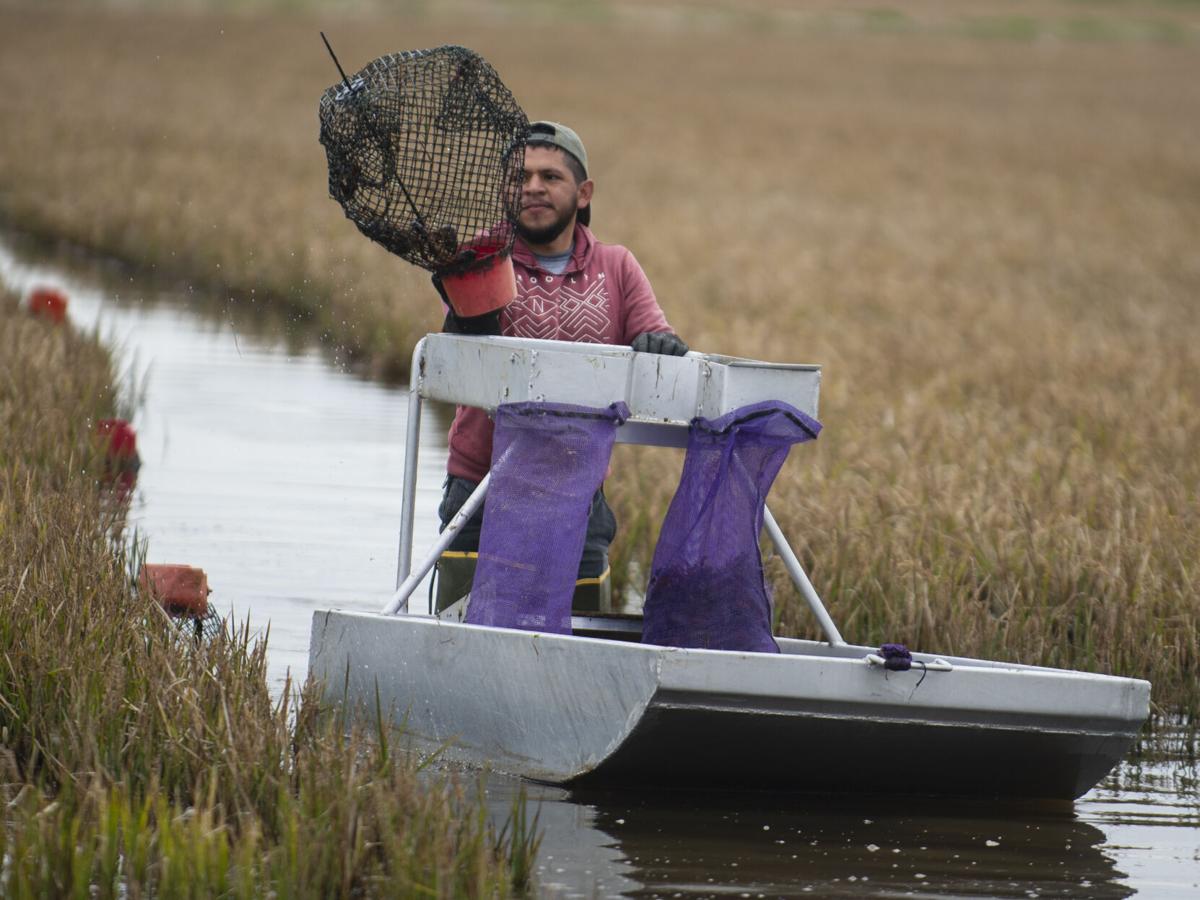 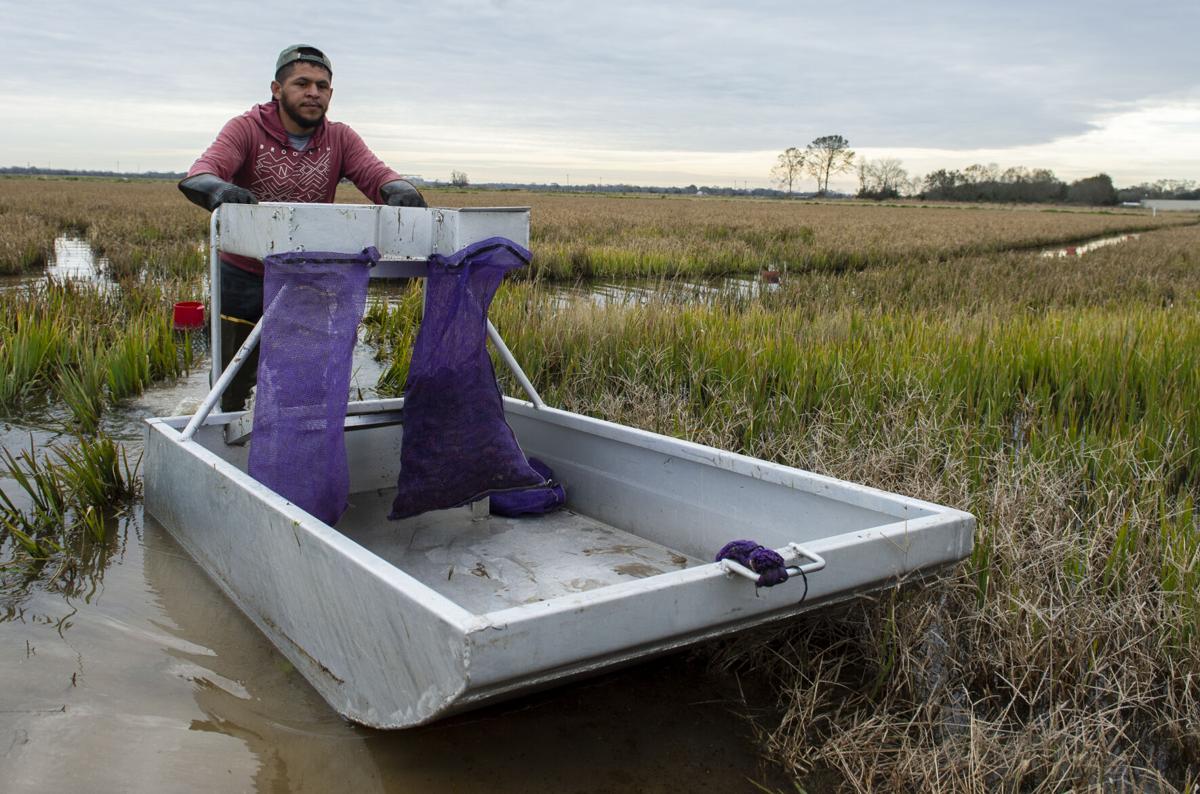 Omar Izael pushes a boat through crawfish ponds while checking traps on Wednesday, January 6, 2021, at Fruge Seafood in Branch. 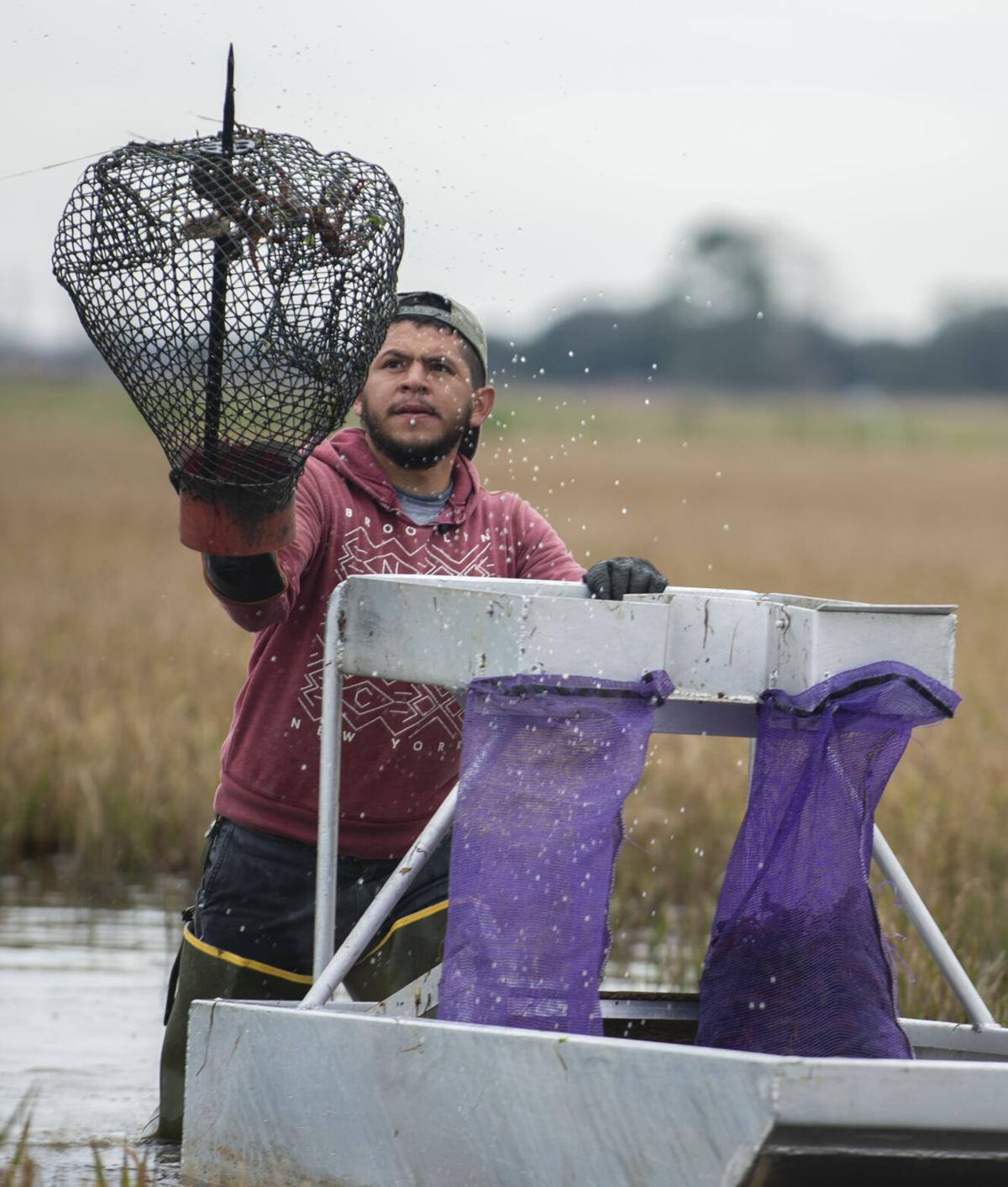 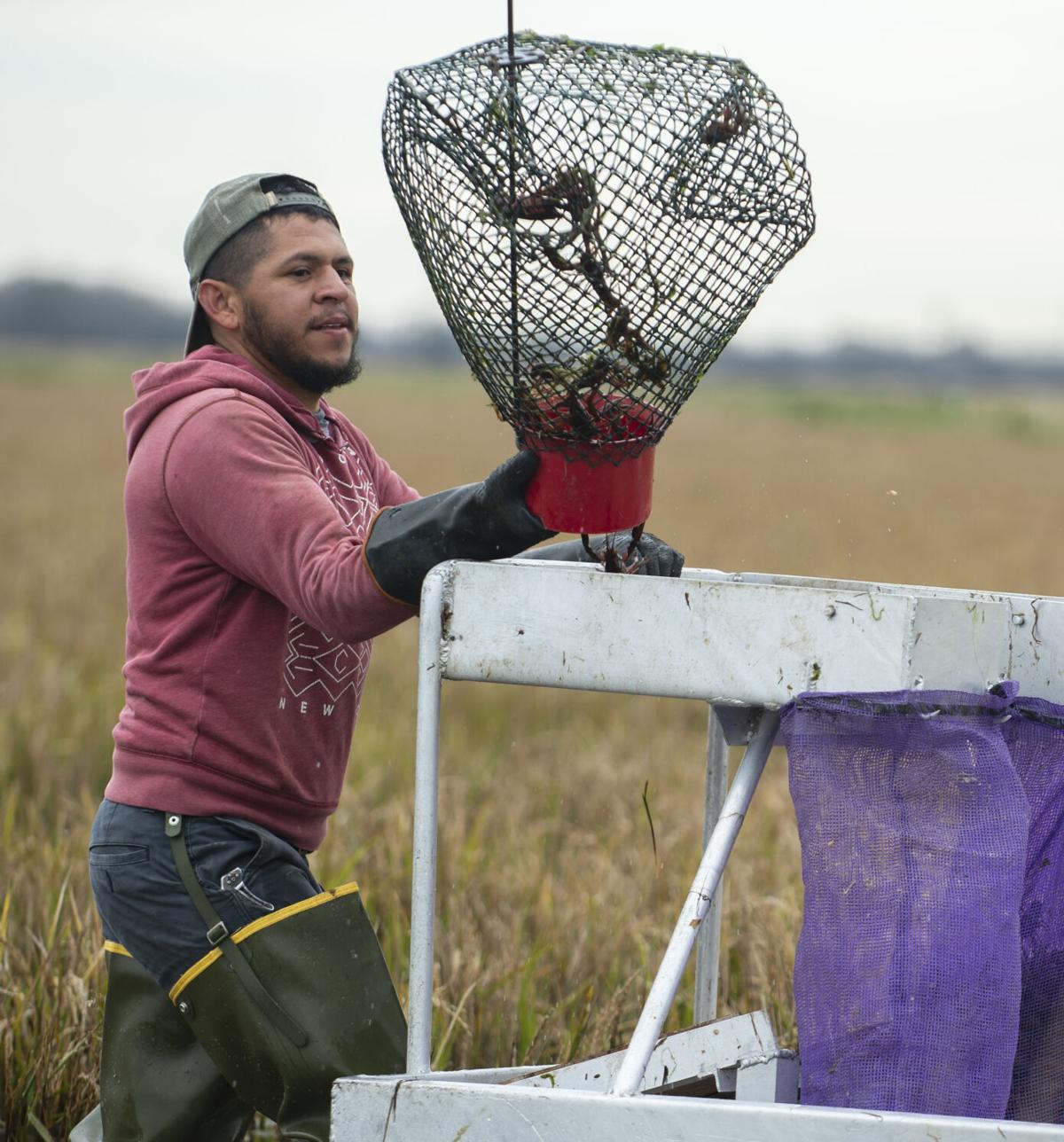 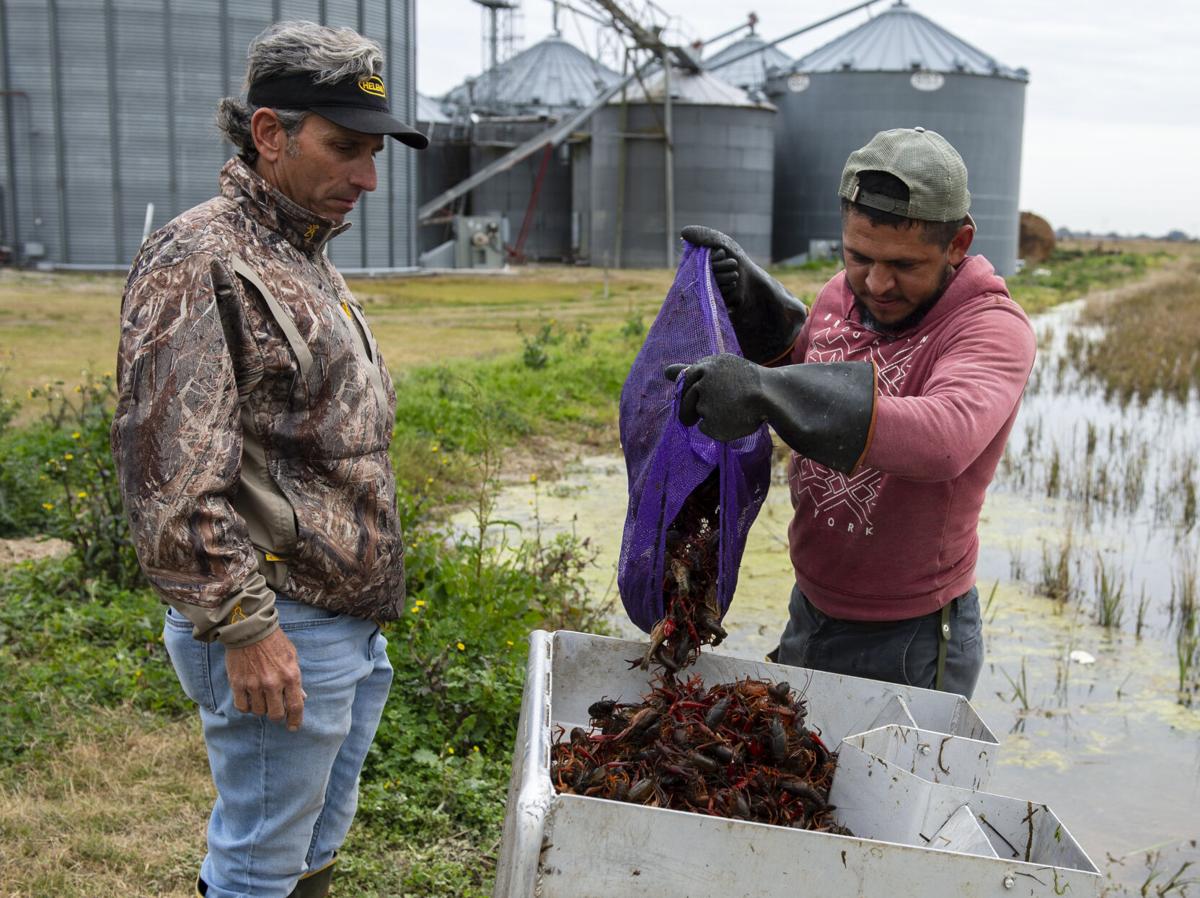 Mark Fruge, left, and employee Omar Izael look over a sack of live crawfish harvested earlier in the day on Wednesday, January 6, 2021, at Fruge Aquafarms in Branch. 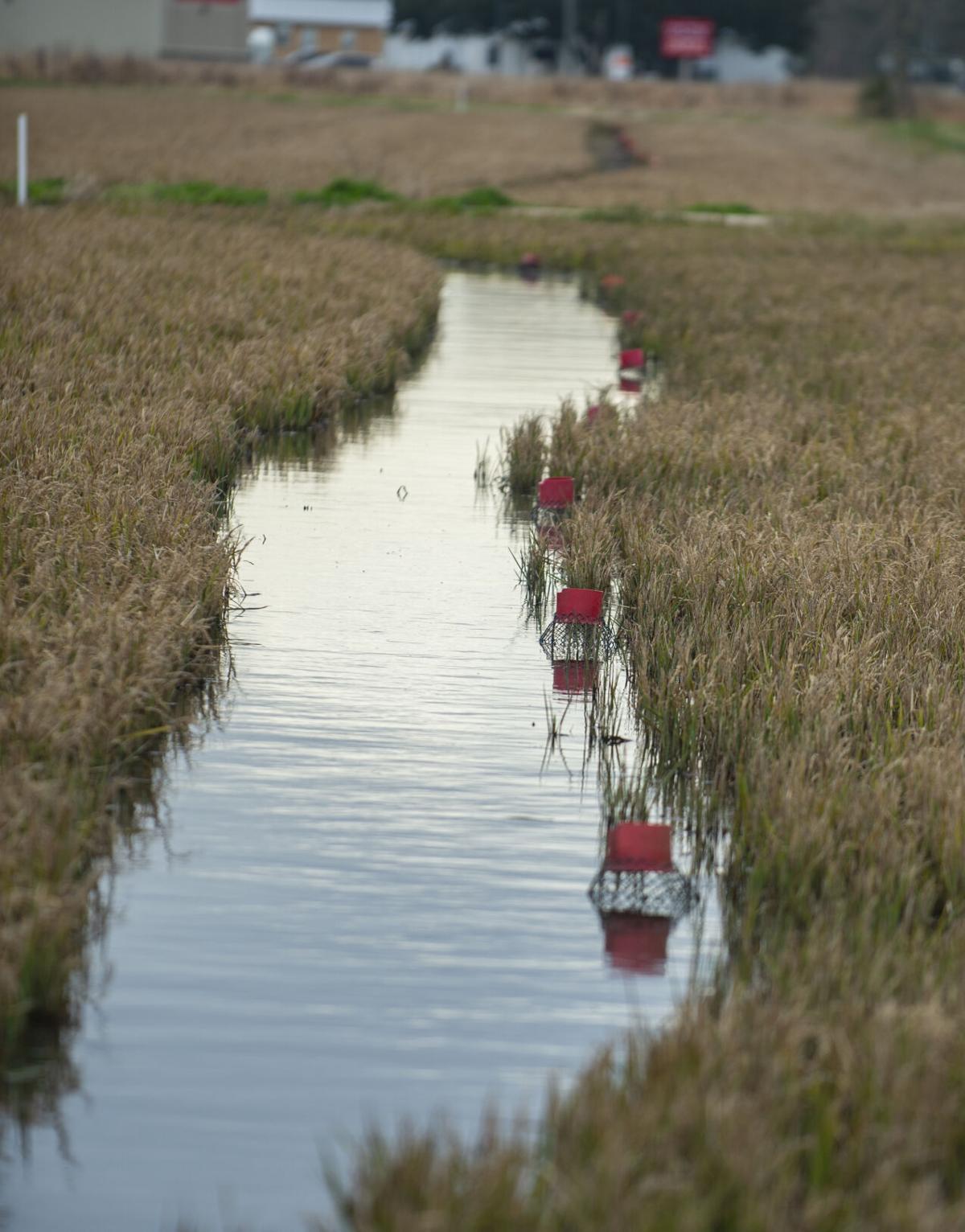 A row of crawfish traps is shown on Wednesday, January 6, 2021, at Fruge Aquafarms in Branch.

Mark Fruge holds a live crawfish that was harvested earlier in the day on Wednesday, January 6, 2021, at Fruge Aquafarms in Branch.

Omar Izael pushes a boat through crawfish ponds while checking traps on Wednesday, January 6, 2021, at Fruge Seafood in Branch.

Mark Fruge, left, and employee Omar Izael look over a sack of live crawfish harvested earlier in the day on Wednesday, January 6, 2021, at Fruge Aquafarms in Branch.

A row of crawfish traps is shown on Wednesday, January 6, 2021, at Fruge Aquafarms in Branch.

Some crawfish farmers were hurt last spring when the coronavirus pandemic caused demand to plummet. But like anything else, many farms were able to rebound.

Which makes the outlook for upcoming season maybe a cautiously optimistic one.

At Fruge Farms in rural Acadia Parish, their 2020 season may have been an outlier. It was the demand from restaurants with drive-thru windows that kept things moving last year during the pandemic after many restaurants had to shut down interior dining spaces during the peak crawfish season.

Brothers Mike and Mark Fruge had their first harvests of the season on Wednesday and admitted last year for them was better than anticipated.

“The one thing that sort of survived COVID was crawfish,” Mike Fruge said. “Because of drive-thru, people still kept wanting them. We sell a lot of other things. The drive-thru and orders to-go, crawfish was probably our most popular item throughout last spring. It was a shock to us — a pleasant one.”

Around 100 people at three crawfish farms in the Acadiana region have tested positive for the new coronavirus, state health officials said Mon…

This season the pandemic may put a damper on things after last year’s crop was historically high due to the mild winter of 2019. Experts are waiting to see what affect the two hurricanes that hit southwest Louisiana will have on the crop since some parishes experienced flooding in August and September.

Crawfish eggs start to hatch in late August and the hatchlings cling to the tail of their mother for several weeks while she stays in her burrow. When a heavy rainfall happens, crawfish go out into ditches and ponds and the hatchlings disperse.

Some acres did not have a lot of burrows open up until later, said Mark Shirley, an Abbeville-based agent with LSU AgCenter, and there was not much crawfish activity early after the flood up to October.

“Since then some of the acres are showing signs of young crawfish, which were probably a late hatch,” he said. “It could be some of those coastal parishes could be delayed in their productions. Their production could be down slightly overall. That’s what we won’t know until the end of the season.”

At Fruge Farms, things are progressing normally at the brothers’ 2,000 acres of crawfish farms near the Branch community. The Fruges have been at this for nearly 30 years, having first started as college students, and know the season is determined by weather patterns dating back to the previous summer.

So far, so good, they said. The crawfish they pulled Wednesday were large enough to stay in the traps.

“If you have a drought in the summer, you can lose a good portion of your crop,” Mike Fruge said. “This year we had a fairly normal year. Sometimes hurricanes can mess you up if they come early, but the hurricanes were relatively late. And we didn’t have a lot of rain from them, so they didn’t do much damage. This year everything looks like it’s progressing normally.”

Farmers who didn’t fare as well last year are having to start over this year due to the last year’s drop in revenue, said Laney King, co-founder of The Crawfish App, which monitors prices. They did not have the revenue to continue operations as normal last year, which delayed this year’s supply.

The hurricanes affected some farmers in southwest Louisiana, she said. Griffin Dorr with C&J Farms in Crowley said he usually has his traps set by Thanksgiving but did not set them until this month.

That will translate into higher prices. Right now prices on King’s app are at $5-$6 per pound live and $7-$8 per pound boiled, but they should come down by mid-March.

Slimy invader is attacking Louisiana where it hurts: crawfish and rice farms

First it came for your wetlands. Now it’s coming for your crawfish and your rice.

“The cold weather is also playing a big role in the low supply,” she said. “We are hopeful that supply will be much higher as the weather warms up a bit. Higher supply means lower prices. And the demand for crawfish is certainly high since many people had to miss out on their planned crawfish boils with friends and coworkers last year.”

The volume statewide should increase since more farmers are doing crawfish, Shirley said. Last year crawfish farms totaled 250,000 acres, but this year there could be another 10,000.

“It’s still a good endeavor for farmers to include crawfish production in their overall farm operation,” Shirley said. “Quite a few farmers are adding more acres to their operation.”

Overall, crawfish ponds made it through Hurricane Laura better than many other Louisiana crops.

Acadiana Business Today: Crawfish season is here, but so is coronavirus. Will there be some pent-up demand this year?

Liz Breaux says Red's Levee Bar is "legal as can be" and has been for nearly 70 years, even though the small bar in rural St. Martin Parish ha…