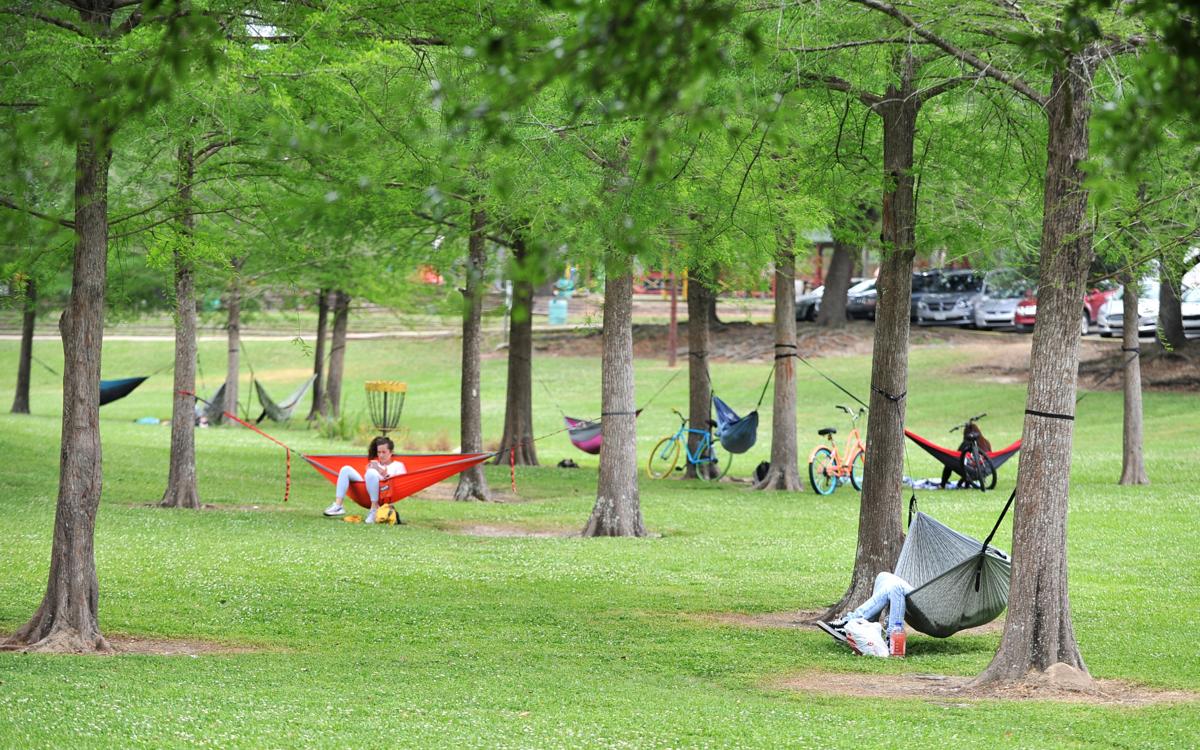 Individuals and couples spend an afternoon in their hammocks on Saturday, April 4, 2020, at Girard Park in Lafayette. 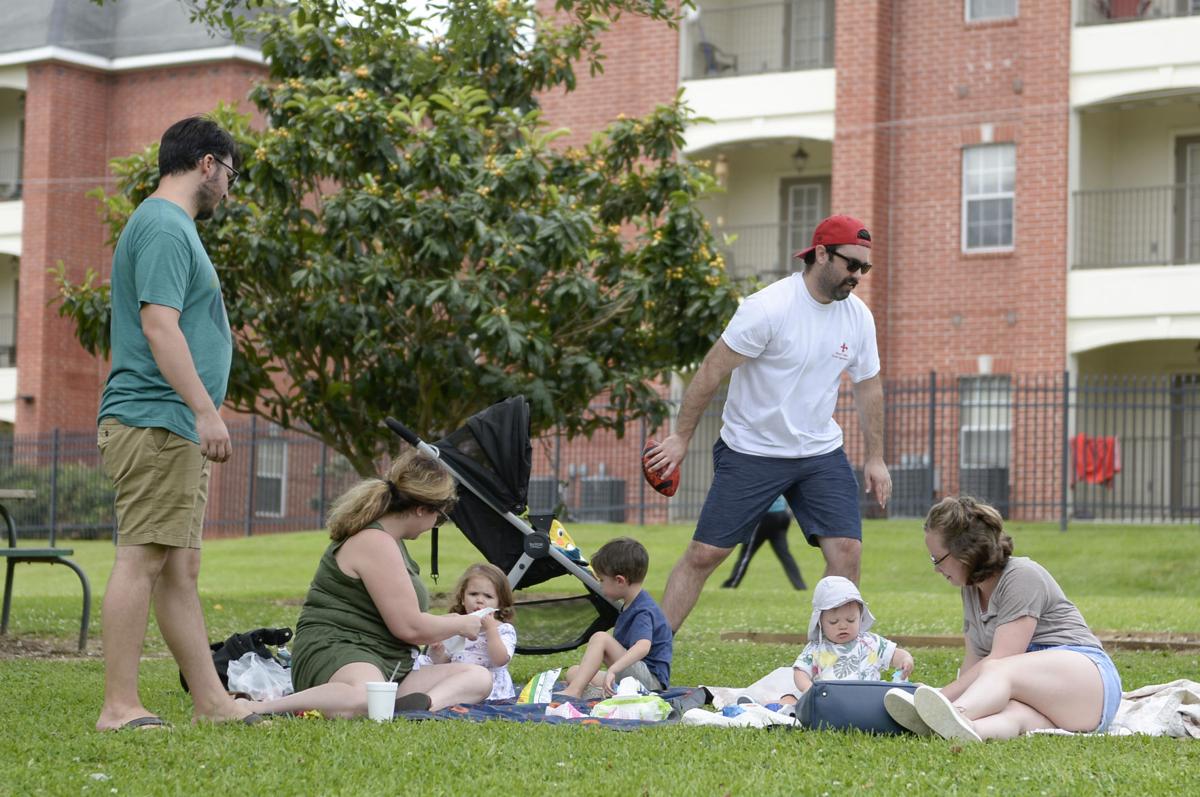 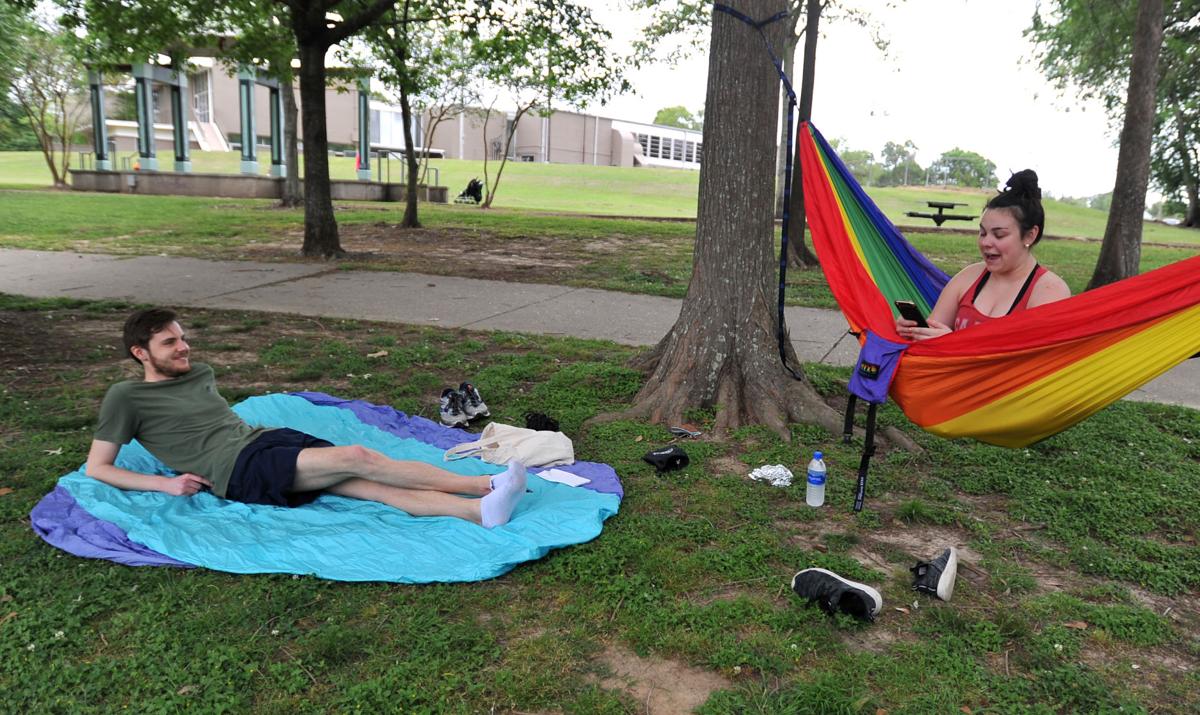 Roommates Christian Guidroz, left, and Nikki James, spend some time hanging out on Friday, April 3, 2020, at Girard Park in Lafayette. 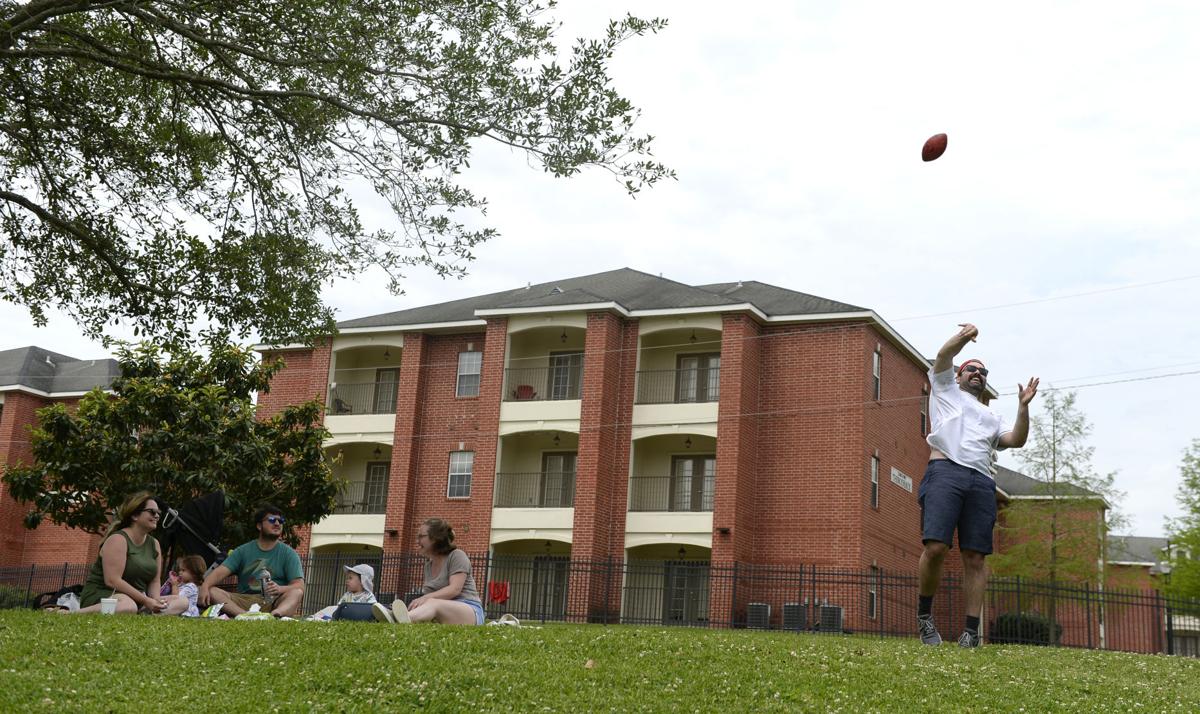 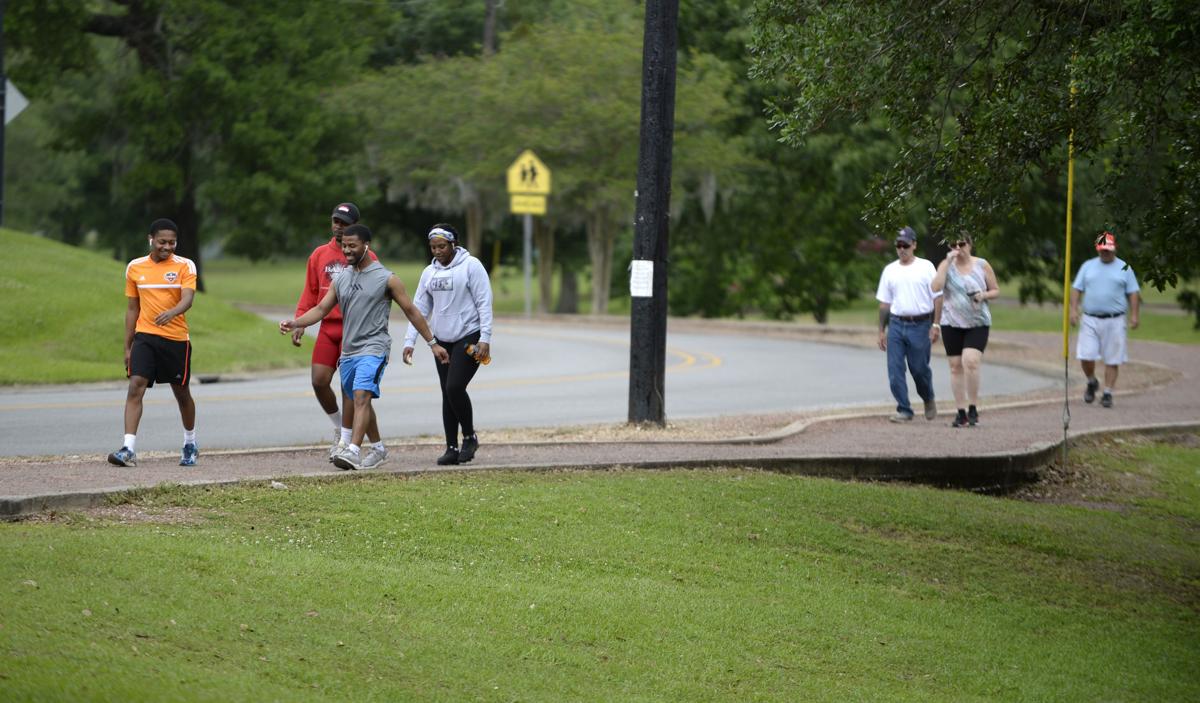 People walk the track on Friday, April 3, 2020, at Girard Park in Lafayette. 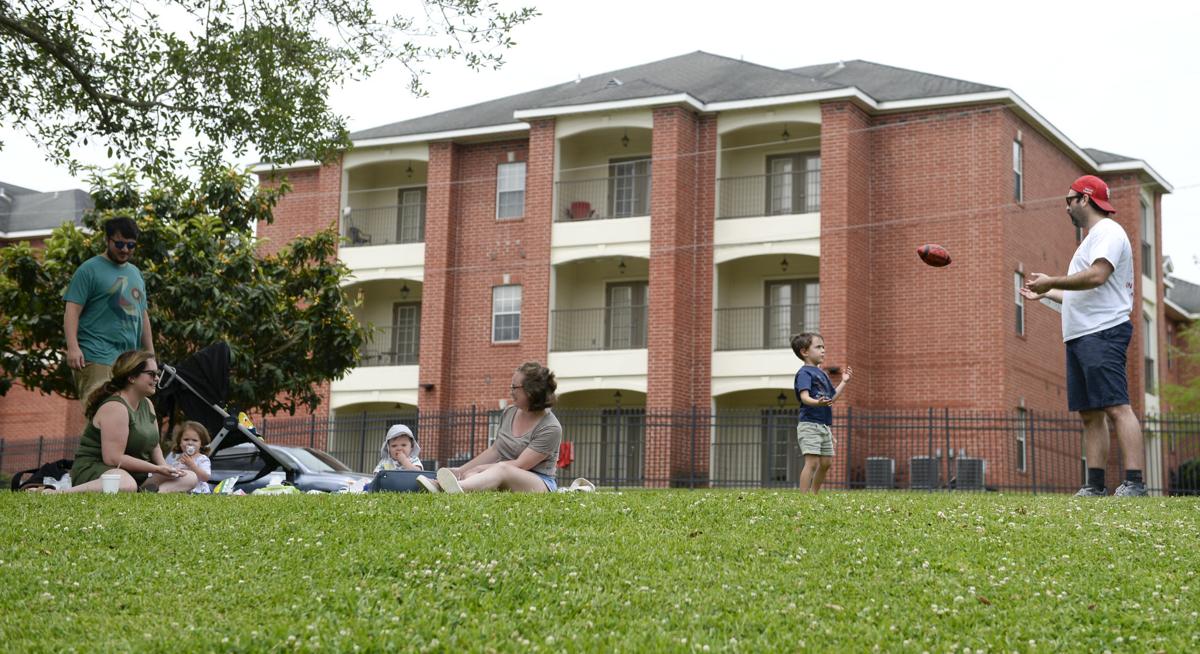 Individuals and couples spend an afternoon in their hammocks on Saturday, April 4, 2020, at Girard Park in Lafayette.

Roommates Christian Guidroz, left, and Nikki James, spend some time hanging out on Friday, April 3, 2020, at Girard Park in Lafayette.

People walk the track on Friday, April 3, 2020, at Girard Park in Lafayette.

“It’s difficult to hold a crawfish boil over a webinar,” says Troy Blanchard, LSU sociology professor and dean of the College of Humanities and Social studies. That matters, he said.

One reason events like crawfish boils are important in Louisiana, he said, is social: Interactional settings present opportunities to develop relationships within our state’s shared culture. That’s personal and has been for generations. It's more than the food.

It’s also impossible to hold a crawfish boil in a time of pandemic and with the necessary practice of social distancing, which mandates physical separation. Festivals, football games, concerts, tailgating are not just about what we do or where we go, Blanchard says. They are about who we are. For now, those events cannot occur.

“We can’t do a Zoom meeting for a football game," he said.

Social interactions hold an inherent value not only in our personal lives, he said, but also an economic value in how we deal with others. They provide the settings for meeting others, for doing business.

“Knowing your brother-in-law’s friend gets you a job,” Blanchard said. “When you buy a car, price matters but there can also be a trust factor that goes into that, one that can be built on social interactions.”

Can south Louisianians ever return to those casual, easy personal relations that develop from social settings? When social distancing stops, can we go back to where we were with social interactions.

“It may be the case that when we are allowed out in public spaces, that some people may think twice,” said Jessica Pearce, who serves on the sociology faculty at the University of Louisiana at Lafayette. “I don’t know if that will last.”

Pearce said that part of what everyone is experiencing in a global crisis is the loss of social norms, the lack of regular routines. Handshakes and hugs are part of our routines.

“We’ve lost that and it’s very scary,” she said.

Among Pearce’s research areas are digital sociology and online communities. We have become accustomed to the accessibility of people online and through social media and texting, she said. Zoom, she adds, adds a recognition of other people because they are presented on the screen before us.

But, she said, nothing beats face-to-face communication.

“There is a connection and intimacy and satisfaction in talking across from someone,” she said. “People are starting to notice the importance of real-life connections.”

Once social distancing ends, once we can gather in groups and in shared, physical spaces, people may relish the return to normal. Or will they? That might depend upon the physical risk factors that some people hold, Pearce said, including the elderly or those with challenged immune systems who were most imperiled by the novel coronavirus. It may depend upon how long we remain in our houses and at strict social distancing guidelines.

“It may be telling when things go back to normal, such as at football season or in festivals. How packed will the stadiums be? How many people will do tail gates? Some people may be hesitant to get back there,” she said.

Anna Long, assistant professor of psychology at LSU, said the best way to understand what people are experiencing is to understand that the world is living in the context of a crisis event.

“We know a lot about aspects of crisis events,” she said. “They put people at risk for traumatic stress reactions.

“There are more problems following a crisis event. We are in the impact phase now. The crisis event is going on.”

Part of the crisis, she said, involves the fact that there wasn’t much in the way of prevention or preparation for where we are now. Steps like social distancing represent the “most efficient and effective” steps we can take. That involves “negative reinforcement,” behavior that stops negative outcomes.” It may be hard to let our guards down, eventually.

Right now, she said, responsible people are “avoiding normal interactions,” behavior that “gives us a sense of control in situations” that helps us to avoid negative outcomes. The longer we remain in that phase, the more difficult it may be to let go of social distancing.

But Long said people are resilient and “recovery is the norm.” Once we get back to a regular rhythm of life, we will get back into normal functioning.

For some, though, those with mental health disorders, developmental disabilities and those exposed to traumatic events, it might prove more difficult to get back to normal. South Louisianians, she said, have been exposed to a lot of trauma: Hurricanes Katrina and Rita, the 2016 floods, and more. Repeated trauma makes it difficult to return to normal.

This crisis is different from others, she added. Part of it is the pervasiveness: “It’s rare that the entire world is experiencing the same thing at the same time.” Usually in a crisis, people can count on someone from the next community or state to help. But everyone is in crisis, she said.

The uncertainty of the virus challenges us, too. There’s a lack of clarity about the virus and its timeline, about when can we return to normal. That adds more stress.

Michael Pasquier, associate professor of religious studies and history at LSU, said the virus has placed special pressures on our faith lives, which are often of solace to people in crisis.

Religion, he said, is both social and physical.

“One need only be reminded of the passage in the Book of Matthew that reads, “For where two or three gather in my name, there I am with them,” Pasquier said. That’s why the pandemic applies pressure on those who regularly attend places of worship — churches, mosques, synagogues, temples. Religious services over social media or on TV provides support, but, as Pearce noted, social media cannot replace face-to-face presence.

“Religion isn’t just about gathering in close proximity to each other,” Pasquier said. “It’s about touching, holding and embracing those in your religious community, both in informal greetings and in formal rituals. The physicality of religion is something that will be very difficult, if not impossible, for people to experience any time soon.”

“Indeed, it is likely that some things about community worship will change even after the pandemic passes,” he said. “Many people will think twice about holding the hands of a stranger, purifying one’s hands or body in shared water sources or drinking from a communal cup. We will be acutely aware of our bodies and the bodies of others, perhaps like never before.”

Blanchard said that the prevalence of the Catholic Church in south Louisiana also makes the region more outgoing culturally.

“Catholics externally are more oriented toward the community,” he said. “Catholics do that in a way that supersedes others through efforts like Catholic Charities and Catholic hospitals,” efforts that demand social interactions and physically touching others.

The South in general, south Louisiana in particular, come with an “extra helping of friendliness” and person-to-person connection, Blanchard said. That may help south Louisiana recover, sooner or later, no matter how long we must keep six feet apart.

Our Views: Easter story of hope endures for the world

Editor's note: This editorial, in modified form, has marked previous Easter holidays in this newspaper.