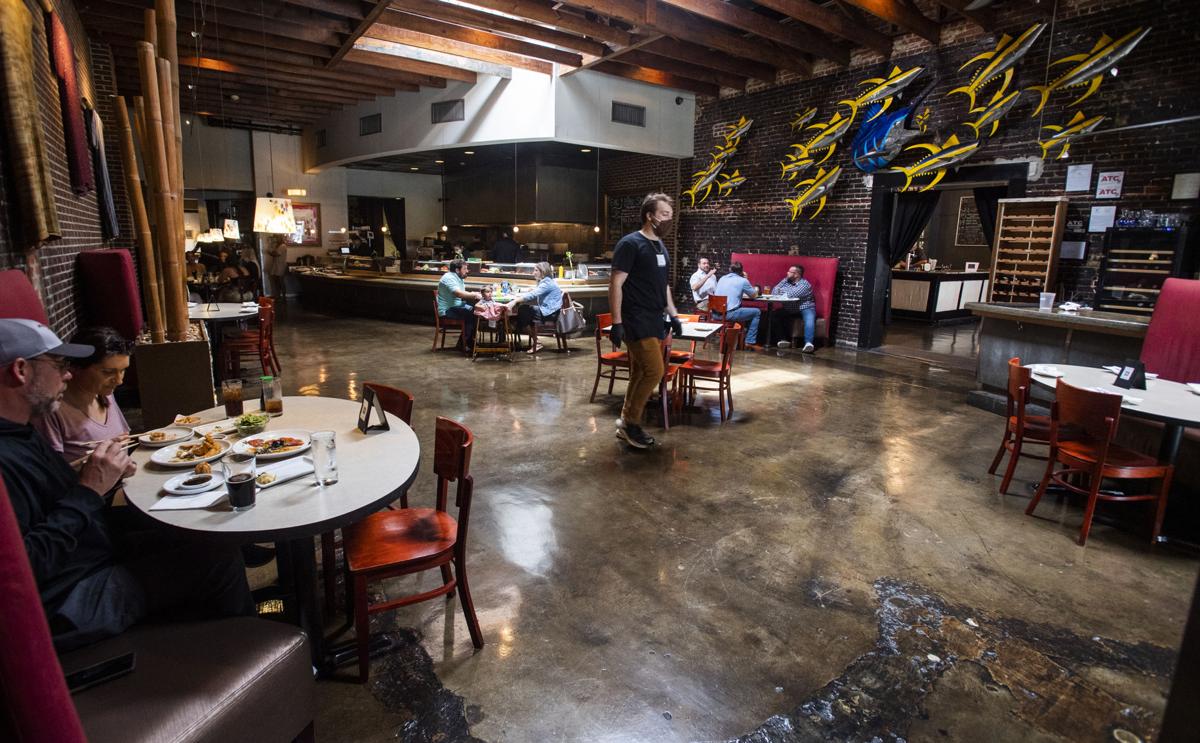 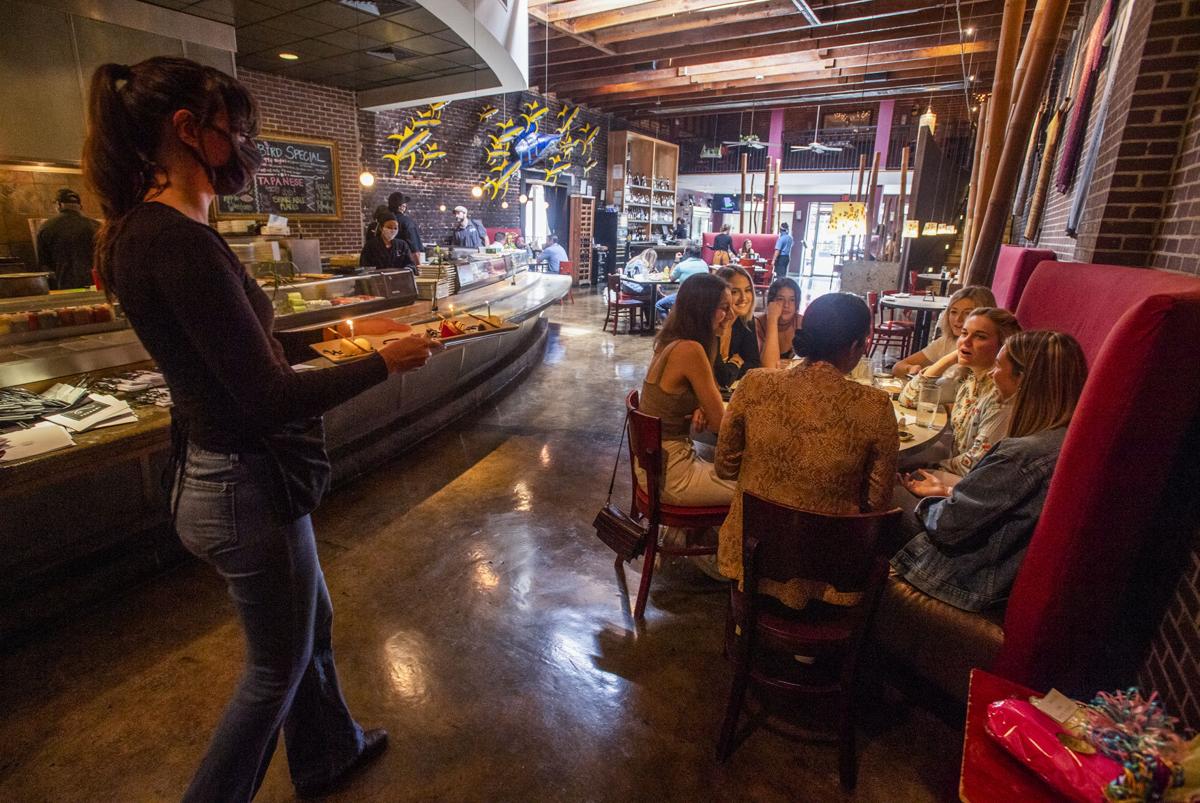 Server Simone Ventura, left, brings birthday candles to the table for Alex Pharr for her 21st birthday inside Tsunami on Friday, May 15, 2020 in Lafayette, LA. This was the first day of phase one of getting back to work. 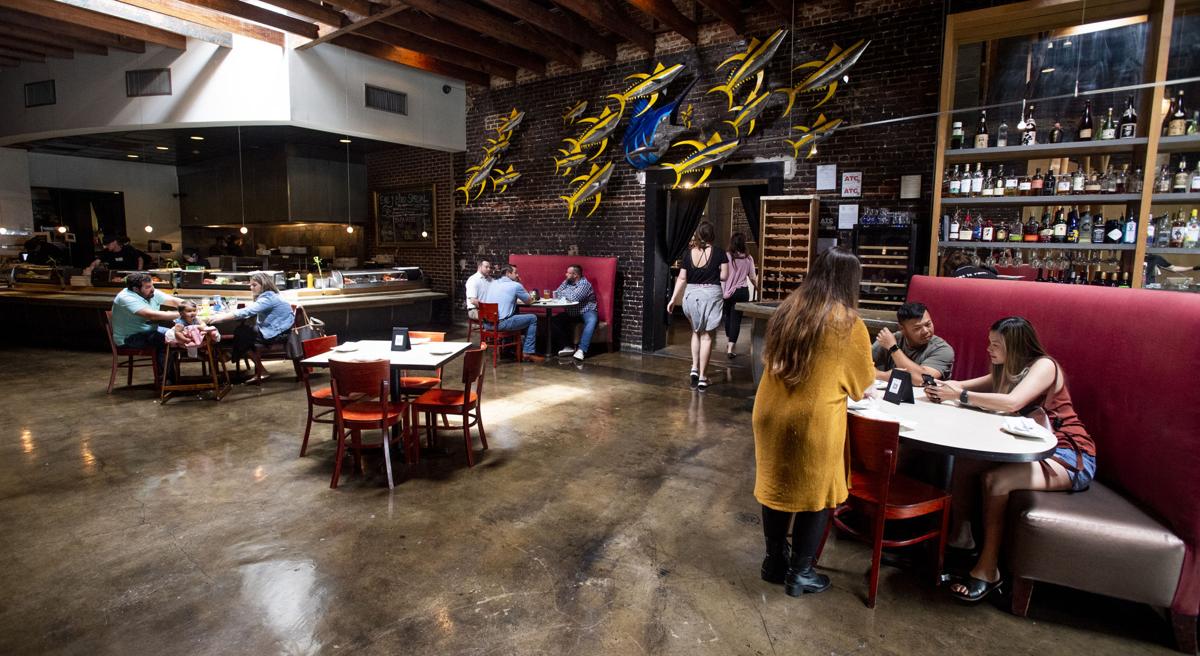 Server Simone Ventura, left, brings birthday candles to the table for Alex Pharr for her 21st birthday inside Tsunami on Friday, May 15, 2020 in Lafayette, LA. This was the first day of phase one of getting back to work.

Tsunami Sushi owner Michele Ezell isn’t complaining when she says this: Her restaurants are feeling more like an operating room.

As many restaurants opened their interior seating areas Friday for the first time since being reduced to takeout only in March because of coronavirus, they did so under strict guidelines. Restaurants can only allow 25% capacity. Employees must wear masks. Tables must be spaced 10 feet apart.

Staffers and customers — which there were plenty of for lunch on Friday at the downtown Lafayette restaurant — complied with the requirements that three months ago would have seemed absurd.

“It’s just weird,” said Ezell, who also operates restaurants in Baton Rouge and New Orleans. “It’s not what we do. It’s not our wheelhouse. It’s the next level making sure that people don’t contract a virus that could kill them. It’s scary.

“Everyone’s expectations are different. Some (customers) are coming in without masks. They don’t care. Then we have some call in and make sure their table is a certain distance away.”

The staff finished the afternoon without complaints from customers, she noted, who respected the process. The main seating area was reduced to eight tables — it normally can have 14 — while there was no seating at the sushi bar or the bar, which seats 36.

Six tables stayed full on Friday, and throw in the increased carry-outs that most restaurants have experienced since the shutdown began, and the afternoon was good. Ezell was also speaking before the evening activity, which had no reservations open until 9 p.m.

“It’s not ideal,” she said. “Your expenses don’t really change very much. There’s a lot of expenses that remain the same regardless of what your revenue stream is or capacity is. It’s not much activity, but it’s the only activity you can do.”

The restaurant was able to open with most of the staff returning after between 50 and 55 employees were furloughed once the shutdown began, she said. Things were different then: carryout exceeded Ezell’s expectations, leaving the six or so employees remaining to hustle to get all the orders during a two-hour window each afternoon and evening.

“I think this whole experience may be a good eye-opening experience for the world about restaurants in general,” she said. “I get it all the time – I wish I had your money. What? A full restaurant doesn’t mean full profits. I think we’re going to see a whole new breed of customers that is really understanding of what we do and how hard it is to do what we do.”

Also on Friday, the staff at Broaddus Burgers opened their dining area to customers, but there were about 20 customers total during lunch, owner Shawn Broaddus said. The pandemic has changed the eatery on Kaliste Saloom Road to more of an evening place to eat than a lunch.

“A lot of things changed for a little while,” Broaddus said. “We always say that when something disappears, there’s another opportunity that opens up. The first week and a half we put a to go menu and a phone number on every single bag that went out the door. We reached out to every customer who dined here. I just thought of it as the same ideas as opening a new restaurant.”

The restaurant was able to keep most of its employees – only bus boys were furloughed but were able to return once it received PPP funds – and the staff got to work on upkeep of the building during the shutdown, he said.

There may still be changes for them.

“There were a lot of to-go orders today,” he said. “I think we’ll have to have a to-go person all the time.”

Not all restaurants offered dine-in service Friday. At Laura’s II Café, owner Madonna Broussard continued with the curbside pickup for customers. The layout of the building’s interior – the tight entryway as you enter the building before reaching the dining area – was enough for her to err on the side of caution.

“We’re still trying to play it safe,” she said. “The numbers were high here. We put the table outside, maybe another week until we kind of modify it. We don’t have a lot of space. I just want people to be patient. If we let everybody in, it’s going to be a mess.”

At Spoonbill Watering Hole and Restaurant, customers were not able to dine in but at least were able to eat on the patio and be served by the wait staff, owner Jeremy Conner said. The restaurant’s staff alone meets the 25% capacity of the building’s interior.

The restaurant was able to make it through the shutdown without furloughs, he said. So even with the overcast sky for lunch Friday, diners came out.

“We’ve had a lot of traffic today,” Conner said. “People are really excited about coming out.”

Take a number: How are Acadiana churches handling limited attendance at services?

Area churches have the green light — well, 25 percent of one — to go ahead with worship services, and responses may be as varied as the church…