Sixteenth Judicial District Attorney Bo Duhé’s office has moved to remove a black judge from more than 300 criminal cases across the district’s three-parish area, arguing she’s made unfounded comments alleging their office is biased against African Americans and bullied staff, victims and others in her courtroom.

District Court Judge Lori Landry’s reported comments include statements that certain assistant district attorneys “deliberately incarcerate African Americans more severely and at a higher rate than others.” She also intimated the District Attorney’s Office knew or should have known about misconduct at the Iberia Parish Sheriff’s Office that eventually led to a federal civil rights case, the motion says.

The District Attorney’s Office argues that Landry is “biased and prejudiced against this Office such that she cannot be fair or impartial.”

Several of the recusal motions will be heard in court this week after an initial hearing was delayed in mid-October. Judges Anthony Thibodeaux and Lewis H. Pitman Jr., of the 16th Judicial District Court, will hear motions on Wednesday and Thursday, respectively. Both judges are white.

Altogether, the District Attorney’s Office has sought to remove Landry from over 300 criminal cases. The same motion was filed in each case, with the defendant’s name, docket number and relevant attorney information changed for each case.

Her current term will run through 2020. When contacted Tuesday, Landry’s secretary said the judge was unable to comment given the ongoing court proceedings.

He said in the motion the decision to seek Landry’s recusal was made after “great deliberation.” Vines also claimed, “Judge Landry’s accusations and mistreatment have been escalating in frequency and seriousness.”

In the motion, he offered more than 30 examples of Landry’s perceived bias and inappropriate behavior dating from October 2015 to September 2019, just days before the District Attorney’s Office began filing the recusal motions.

In one instance, she accused an assistant district attorney of offering a “sweetheart deal” to a white defendant, while other times, she questioned the difference in handling of cases and plea deals between white and black defendants. On separate occasions, she called the district attorney’s pretrial diversion program “extortion” and “highway robbery,” the motion claimed.

On June 11, Landry called a joint request from the prosecution and defense to continue a black defendant’s trial to a later date “B.S.” She went on to say, “They wait and wait and wait and wait until you pick up another charge. That’s what happens,” among other statements.

In response to Landry’s reported behavior, the District Attorney’s Office implemented a policy that all bench conferences with her must be recorded, court documents say.

The motion also claims Landry was disparaging toward victims and victims’ family members. In a case involving incest in St. Martin Parish, Landry “suggested that the children’s parents let the grandparents babysit the children too often, and that they made ‘decisions that they should be paying attention to,’” court documents say.

In October 2018, Landry refused to hear new charges that would have supported probation revocation for Aries Antoine, the District Attorney’s Office claims. The defendant was on probation for illegal possession of a stolen firearm, unauthorized entry of an inhabited dwelling and simple criminal damage to property convictions and had been arrested on new charges including assault by drive-by shooting, aggravated criminal damage to property and simple battery.

Landry instead found Antoine was in “substantial compliance” with her probation, the motion said. Two months later, Antoine was arrested on counts of aggravated assault and attempted second-degree murder. She’s accused of shooting a 15-year-old boy after “threatening him because he was associating with someone who allegedly stole her friend’s dog.” 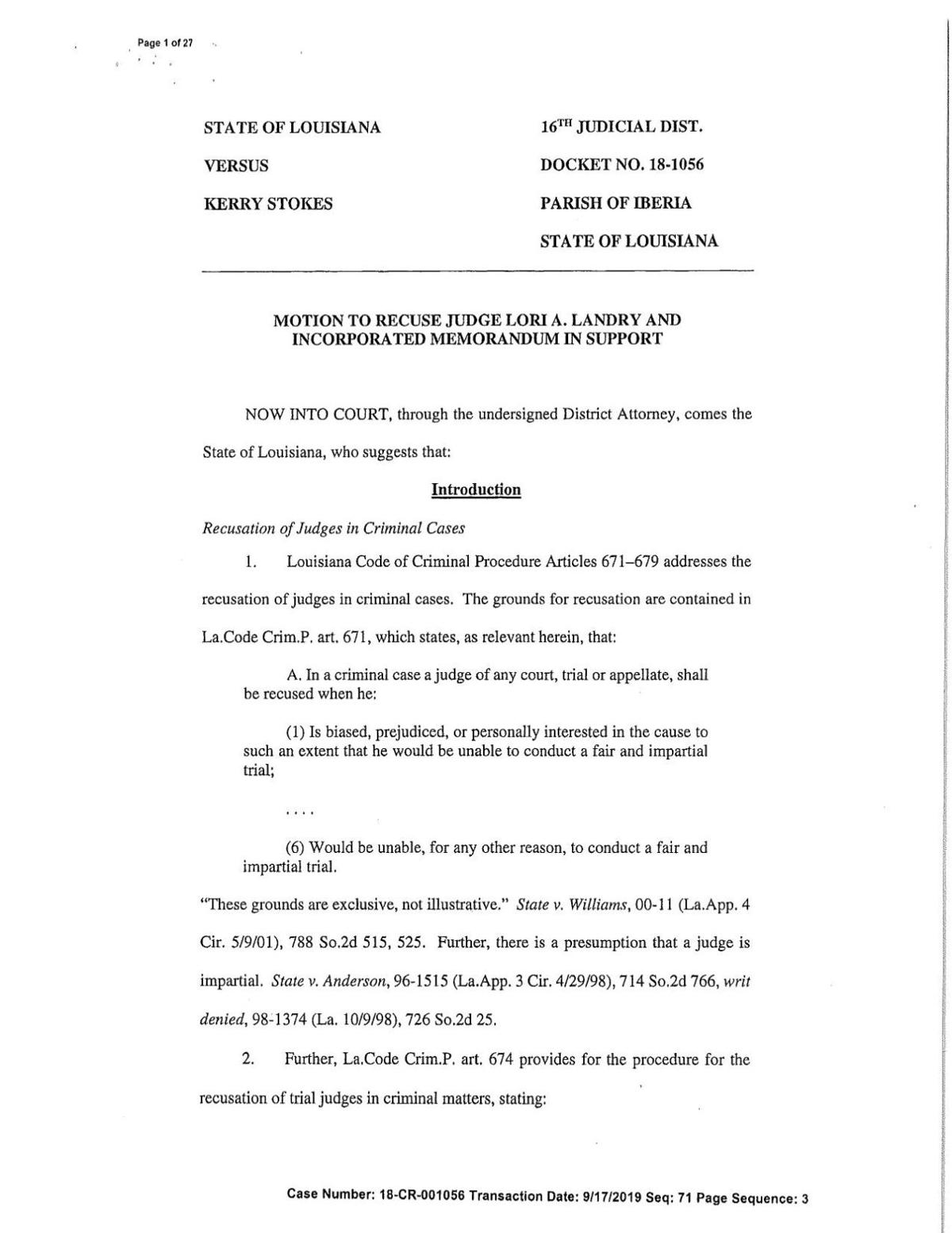