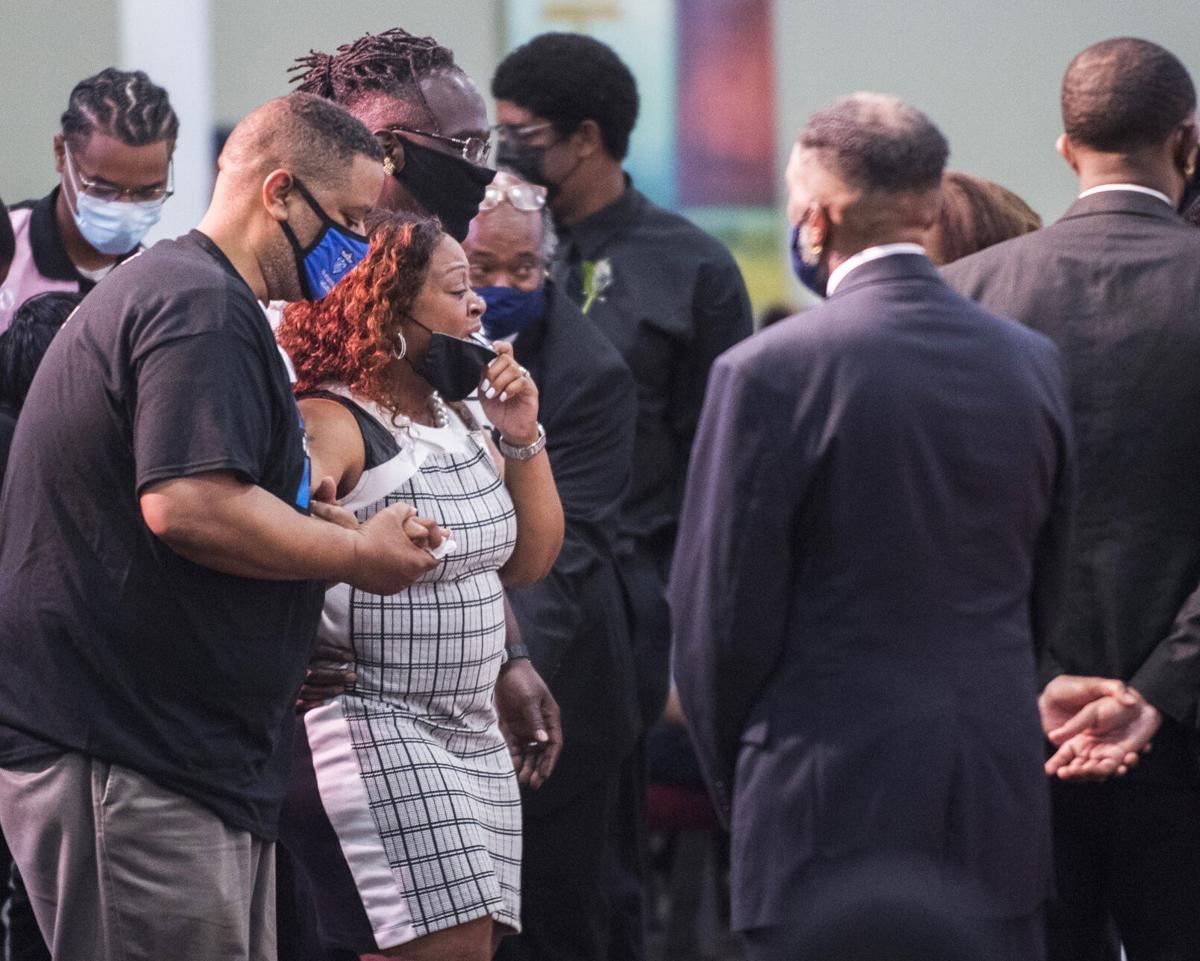 Michelle Pellerin is helped to the casket for the final viewing during the funeral for her son Trayford Pellerin Thursday, September 10, 2020, at Philadelphia Christian Church in Lafayette, La. ORG XMIT: BAT2009101535170656 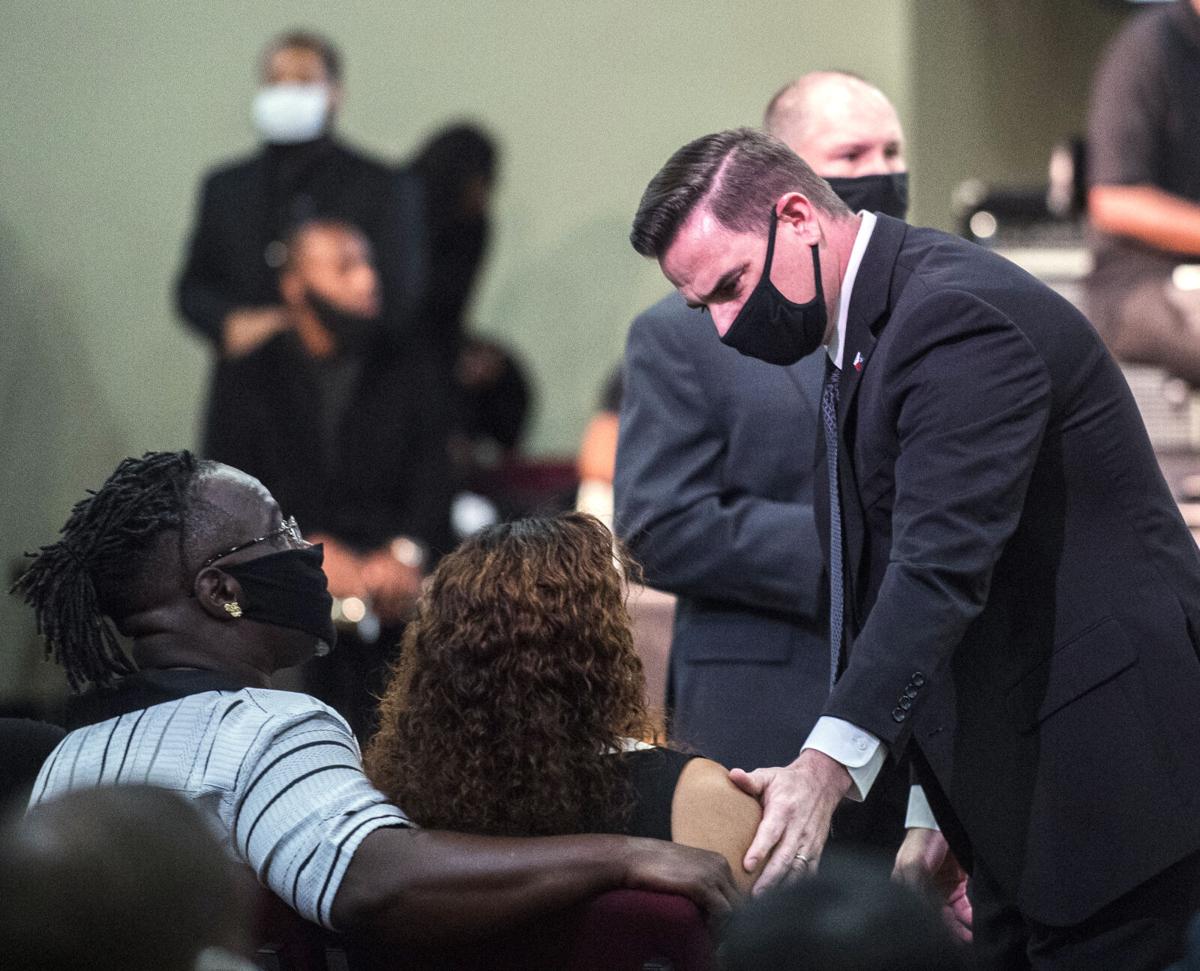 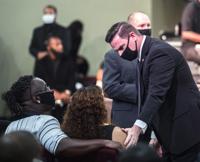 Lafayette Mayor-President Josh Guillory speaks to Michelle Pellerin and her fiance Calvin West during the funeral for her son Trayford Pellerin Thursday, September 10, 2020, at Philadelphia Christian Church in Lafayette, La.

Michelle Pellerin is helped to the casket for the final viewing during the funeral for her son Trayford Pellerin Thursday, September 10, 2020, at Philadelphia Christian Church in Lafayette, La. ORG XMIT: BAT2009101535170656

Lafayette Mayor-President Josh Guillory speaks to Michelle Pellerin and her fiance Calvin West during the funeral for her son Trayford Pellerin Thursday, September 10, 2020, at Philadelphia Christian Church in Lafayette, La.

Attorneys for Trayford Pellerin’s family filed a petition Friday challenging a temporary restraining order that would bar the release of body camera footage, the names of officers involved and other evidence in the police shooting death of their son.

The order, granted by Judge David Smith in 15th Judicial District Court on Tuesday, says Louisiana State Police, the Lafayette Police Department and Lafayette Consolidated Government are prohibited from providing the identities of three officers involved or statements, documents, reports, or audio/video footage taken during the shooting to the public.

The order was requested on behalf of three unidentified officers involved in the shooting and was filed under seal. The injunction argued the public release of information and evidence in the case would impair the integrity of ongoing investigations into the shooting and anticipated civil litigation.

The Pellerin family’s petition, filed on behalf of Trayford Pellerin’s parents Cedrick and Michelle Pellerin, argued his parents have an obvious and justifiable interest in access to the investigative materials. Copies of the filing were released by the Pellerin family’s legal team Friday afternoon.

Attorneys argued public access would not impair investigations or civil litigation; no litigation has been filed to date, discovery would regardless be necessary before a civil suit could be filed and release of the information would not alter or impair the evidence itself, maintaining the integrity of law enforcement’s investigation.

At Trayford Pellerin's funeral in Lafayette, loved ones and activists vow 'to get justice for Tray'

After weeks of chanting his name in the streets, activists and family members tearfully gathered Thursday to say their final goodbyes to Trayf…

“It is frankly wrong to assert that such evidence must remain hidden from the Pellerins and the public under the guise that the integrity of the investigations could be compromised were such evidence released. In fact, the opposite is true — the only way the evidence could become “impaired” is if it is mishandled, lost, tainted, spoliated, adulterated, altered or permanently suppressed by police (which is a legitimate fear if the Protective Order is used),” the petition said.

The family’s four attorneys, including Ronald Haley, who’s been a public voice for the family, also argued it’s concerning that the police may be left to police themselves if evidence is not made available to the family and others, the petition said.

The Pellerins requested they be included as defendants-in-intervention in the case and their attorneys be allowed to plead their position at a Tuesday hearing on the restraining order. At the hearing, Lafayette Consolidated Government, the Lafayette Police Department and Louisiana State Police will be given the opportunity to argue why the evidence should not be released.

Alternatively, if they are not considered defendants in the case, the Pellerins requested they be exempted from the order and considered “associated with the investigations” to allow Cedrick and Michelle Pellerin an avenue to view the body camera footage, court documents said.

“This Court has the authority and power to bestow some level of peace and solace on a grieving family, which has waited long enough. They respectfully pray for that redress,” the filing said.

Friends and family gathered to remember the life of Trayford Pellerin, 31, who was shot and killed by Lafayette Police officers on Aug. 21.

The filing included a copy of a letter Mayor-President Josh Guillory sent to 15th Judicial District Attorney Keith Stutes on Tuesday detailing his intention to schedule a private viewing of the body camera footage for the Pellerin family. Guillory made the commitment after a private meeting with the Pellerins and family attorneys on Sept. 4.

Trayford Pellerin was shot and killed at a Shell station at NW Frontage Road and Chalmette Drive on Aug. 21. Louisiana State Police, who is investigating the shooting, said officers responded to a disturbance call at another nearby gas station and found Pellerin armed with a knife. They pursued him on foot, deploying tasers without effect, and opened fire as Pellerin approached the entrance to the Shell station, a state police spokesperson said.

The family has pushed for more details in the three weeks since and launched an independent investigation. An independent autopsy determined Trayford Pellerin was shot 10 times by officers, who fired at least 17 rounds during the altercation. The Pellerin team has questioned the use of force and also challenged police statements about whether Trayford Pellerin was armed with a knife.

Activists will march through Baton Rouge on Friday in response to the killing of Trayford Pellerin in Lafayette.