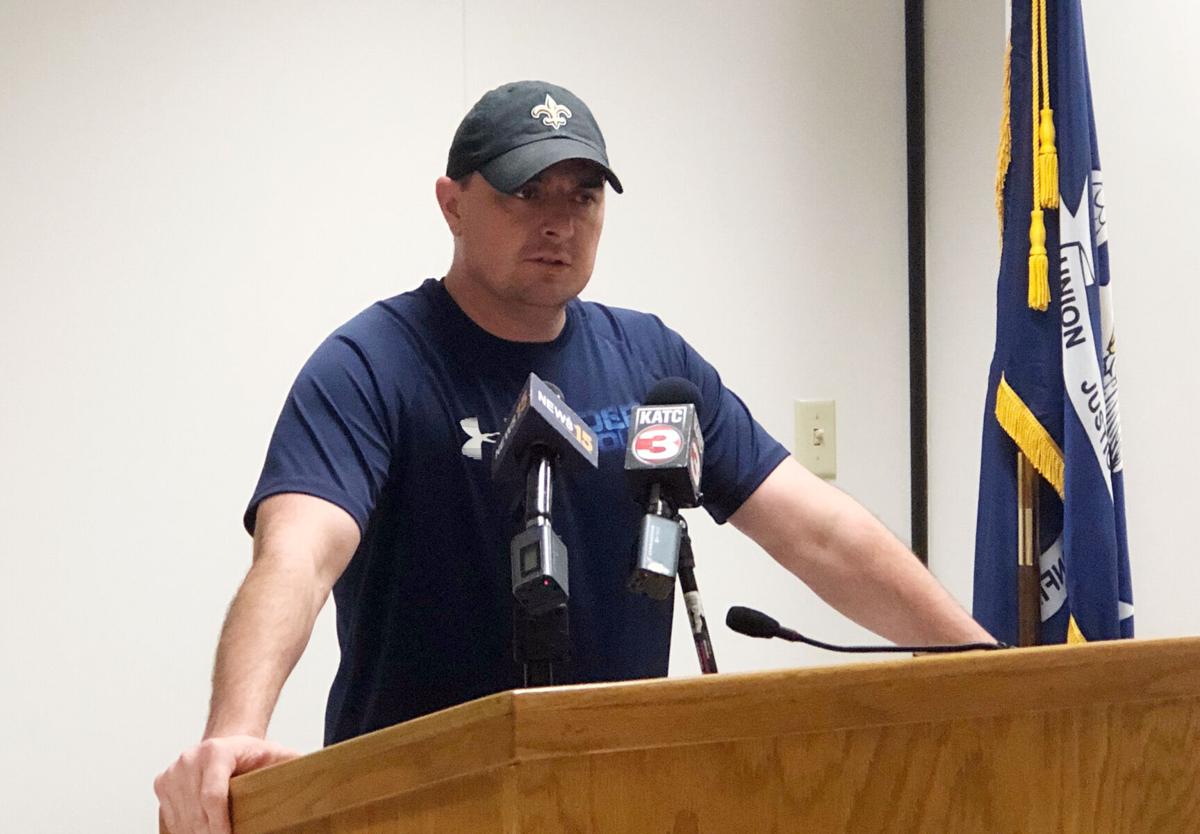 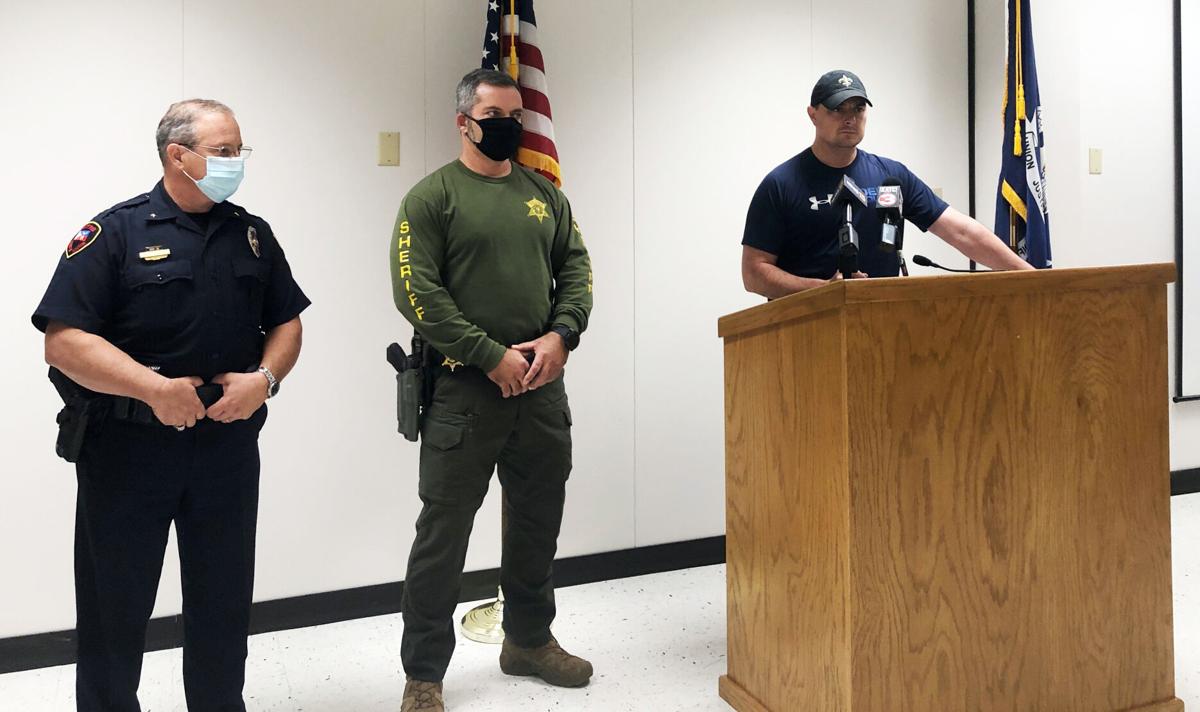 Protesters in Lafayette and Mayor-President Josh Guillory and his administration continue to be at odds over community response to the police shooting death of Trayford Pellerin and how Guillory’s administration should address community unrest in the aftermath.

Protesters again took to the streets Saturday, with a group of roughly 75 protesters gathering outside the Gen. Alfred Mouton Confederate monument downtown before marching a route around downtown, from Jefferson St. to Johnston St. and down to the University of Louisiana at Lafayette campus before heading back to the Mouton statue.

There was heightened police visibility in Lafayette on Saturday as protests took place downtown and at Mayor-President Josh Guillory's house.

Across town, Tara Fogleman with the group Unity 7 was arrested after going Live on Facebook outside Guillory’s home after she set up a grill to cook hot dogs and hamburgers in the roadway. She said the BBQ was an invite for Guillory to come out and discuss Pellerin’s death at the hands of police.

"He don't want to come to our hood, so we're going to come to his," Fogleman said in the video.

Pellerin, 31, was killed by Lafayette police officers Aug. 21 at a gas station near Northwest Evangeline Thruway. Louisiana State Police investigators said Pellerin was armed with a knife and approaching the door of the convenience store when he was shot. Officers had trailed him for a half mile after responding to a disturbance call and deployed tasers, which were ineffective, state police said.

Lafayette Interim Police Chief Scott Morgan said at a Saturday evening press conference Fogleman was arrested for disturbing the peace and blocking a public passage. He said he believed a second person had been arrested in the incident but couldn’t provide details. Morgan said three people were outside Guillory’s home.

The mayor-president said he felt the situation outside his home was escalating but declined to offer details on how the situation was worsening before police intervened. He said Fogleman’s actions weren’t an act of protest, but “public intimidation.”

Mayor-President Josh Guillory on Monday attempted a do-over of his response to the Lafayette Police killing of 31-year-old Trayford Pellerin, …

“It was a tragedy for our community that children and my wife that did not ask for that had to witness it firsthand… I’ve heard lots of references to good trouble to the late, great Congressman, had a very storied career. I don’t think he ever imagined going to intimidate children and going to intimidate people that are not in public office. That’s not good trouble, that’s bad trouble,” Guillory said.

The idea of “good trouble” has been a rallying cry at protests after being championed by the late John Lewis, a Black U.S. Representative and civil rights leader who died in July.

Looking to larger protest events, law enforcement leaders and Guillory warned about “out-of-town” agitators coming to Lafayette to participate in protests. Morgan came out strongly against the presence of outside influences shifting community response and warned that while protesters can bring people in, law enforcement can do the same with partner agencies.

The interim police chief cautioned people with differing views or who oppose the protests not to engage and further whip up the situation by screaming at protesters or using offensive hand gestures. Don’t give them the attention they want, he said.

What Lafayette protesters want after Trayford Pellerin's death: 'Stop and pay attention to it'

A rally spurred by the police shooting of 31-year-old Trayford Pellerin Saturday turned into several days of protests around Lafayette, with d…

Morgan and others declined to offer specifics about what pointed to protests being led or contributed to by out-of-towners. He said they couldn’t share how the intel was received. When asked, the interim chief specified he considered “out-of-town” to primarily apply to people coming from other states.

Critics say Guillory isn’t doing enough to sincerely engage the community and listen to the voices of protesters. Guillory’s fitness for office and leadership of the city have been hot topics of discussion and complaint at protest rallies. His response to Pellerin’s shooting and the protests are seen as the latest in what some members in the Black community feel has been an offensive against them since Guillory took office.

In a press conference last Saturday outside the Lafayette Police Department, Lafayette NAACP President Marja Broussard called Guillory a racist and said his governing approach has harmed the Black community.

The two sides – the collective of protesters and Guillory -- seem no closer to coming together after Saturday’s press conference. Guillory said bluntly he does not intend to meet with protest leaders. He said he’s holding a monthly meeting with local faith leaders, primarily from Lafayette’s northside, and reviving the efforts of the Lafayette Police Department’s community relations committee.

The family of a man shot and killed by Lafayette police Friday says they are mourning and in disbelief, and their attorneys say they will be s…

The committee’s lack of activity since Guillory’s administration took office has been another point of community criticism. Guillory said progress in the parish’s novel coronavirus response has opened the door to resuming meetings, possible community walks and other events.

“I haven’t seen any productivity from these acts of crime…I have nothing to say to someone that wants to cause pain in our community. Instead I’m focused on talking with leaders that want to do good and grow from this situation,” Guillory said.

Trayford Pellerin’s death on the hard pavement of an Evangeline Thruway gas station lot is tragic for many reasons, not the least of which his…