The Lafayette Parish Sheriff’s Office is slashing its community support and diversionary programs and reducing its staff as the office’s budget woes continue.

It’s the latest development in an ongoing struggle between Lafayette Parish Sheriff Mark Garber and Lafayette Consolidated Government over the cost of operating the sheriff’s facilities.

In October, Garber filed suit against LCG, saying the city-parish government has not been paying its fair share of the costs of operating the parish jail. In an attached letter, Garber also outlined several community support programs not mandated by law that are running deficits.

Garber warned layoffs and program consolidations were possible when a proposed half-cent sales tax failed at the polls in December. The tax would have generated $25 million for the department and funded new equipment, deputy positions and other needs.

A sheriff’s office employee, whose position is being eliminated, confirmed layoffs were happening and said dozens of people could lose their jobs over the next couple weeks. The source provided the information on the condition of anonymity.

The sheriff’s office also quietly announced Monday it was ending its transitional work program. Letters and emailed notices were sent to employers informing them the program would cease operation Saturday. The cancellation comes roughly two weeks after the closure of the Juvenile Assessment Center because of budget restraints.

The transitional work program began in 2004 and offered full-time employment and job training opportunities to qualified offenders. In 2014, the program relocated to the Public Safety Complex on Willow Street. The 50,000-square-foot facility included a 192-bed dormitory for male and female transition inmates, with room for expansion to up to 320 beds, according to the sheriff’s office website.

“We are currently undergoing a financial reorganization of the agency as well as streamlining our programs and services to address budgetary constraints,” he wrote. “Out of respect for all parties involved, the Sheriff’s Office will release further information regarding this restructuring only when everyone who will be affected by the changes has been notified.”

The emailed statement said the financial reorganization is necessary to provide “the highest level of security and protection to every citizen in Lafayette Parish.”

The short notice left the company no ability to plan, he said. Each of the workers was essential to their operation and took time to train. One transitional worker, the facility’s mechanic, had been with AmeriGlobe for close to a year and had been trained for the past six to eight months to keep the plant’s sewing machines operational. You can’t replace someone like that overnight, Schnaars said.

The other workers glued liners into the bags, folded and packed finished bags, and completed all other tasks the machines didn’t handle. AmeriGlobe has reached out to temporary employment services to fill the immediate holes, but even if they can get workers, they still need to be trained, he said.

“This will injure us to some degree over the next couple weeks,” Schnaars said.

The business owner said he understands the importance of keeping a balanced budget and recognized he doesn’t know “about all the hassles [the sheriff] is going through.” But budget concerns are typically known for some time, and Schnaars said while the sheriff’s office worked in the background to fix the problem, he wishes they would have been more forthcoming about the possibility of termination.

“I can’t imagine they did this without good reason, but they certainly didn’t work with the community that was supporting the program. I think they could’ve done this in a better way,” he said.

The company had planned a pizza party Wednesday to celebrate Thanksgiving with the Lafayette production staff, but the party turned into an afternoon of farewells as they said goodbye to their transitional work employees, he said.

“Emotionally it’s tough for everyone involved because of the Thanksgiving holiday. Some of these men we’ve gotten close to and consider them almost as family. For them, I can understand how hurtful this is. Their days have been thrown into question,” he said.

“I don’t think anyone really knows what’s going to be happening,” Schnaars said.

The business owner said his company was proud to support the program because it gave offenders an opportunity to seize a second chance and avoid hardships that could lead to recidivism. Because AmeriGlobe can support unskilled workers, it provided a good option for the men to build workplace skills and a solid employment record that could springboard them into future employment.

Schnaars said he hopes the program returns, and if it does, his company will gladly participate again. He told the transitional workers that jobs would be available when their sentences end if they’re interested. One man will be out in a month, he said.

“As I talked to these men, they all seemed like bright young men that wanted to do better for themselves,” he said. “We told them we were proud and thankful we had each of them.” 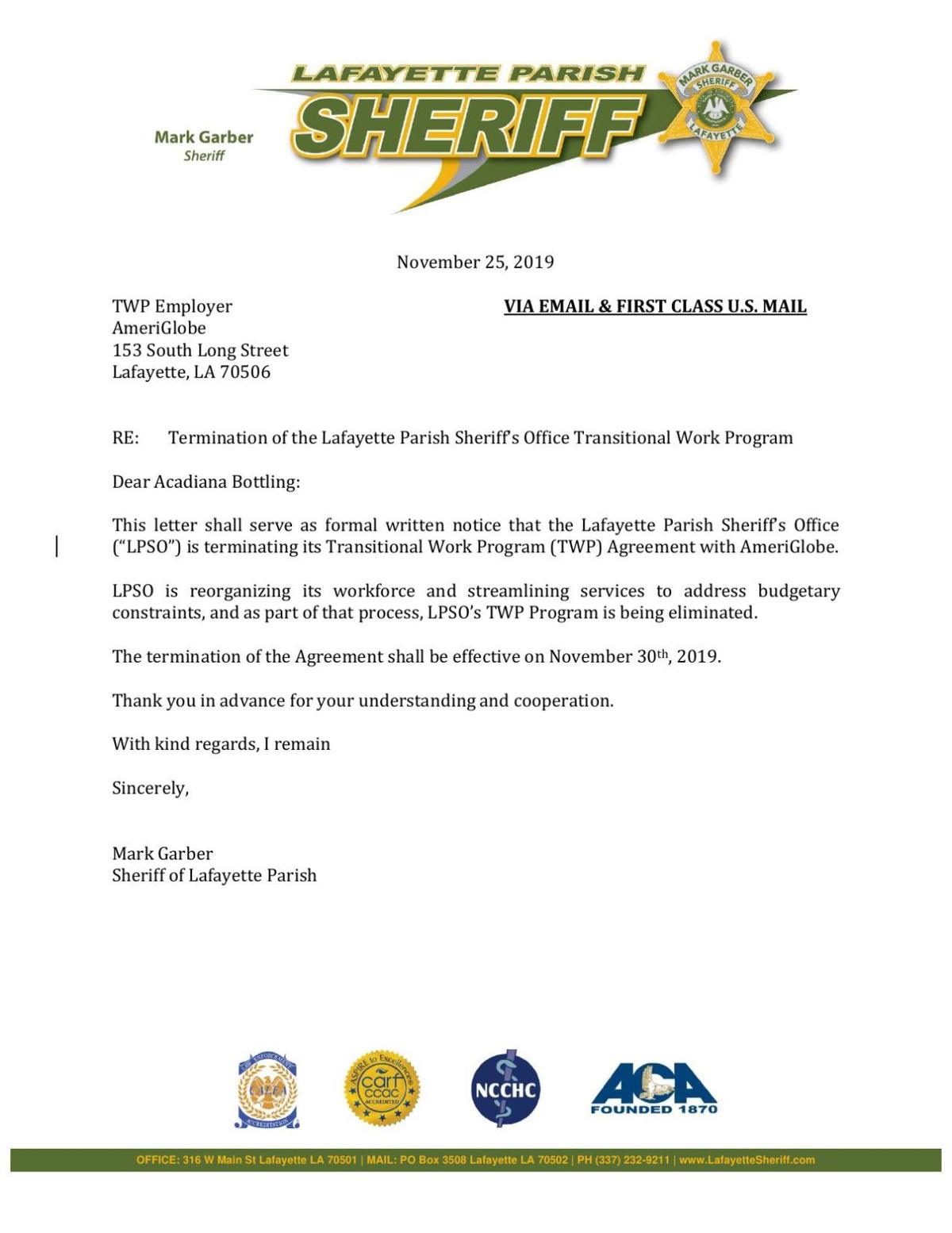