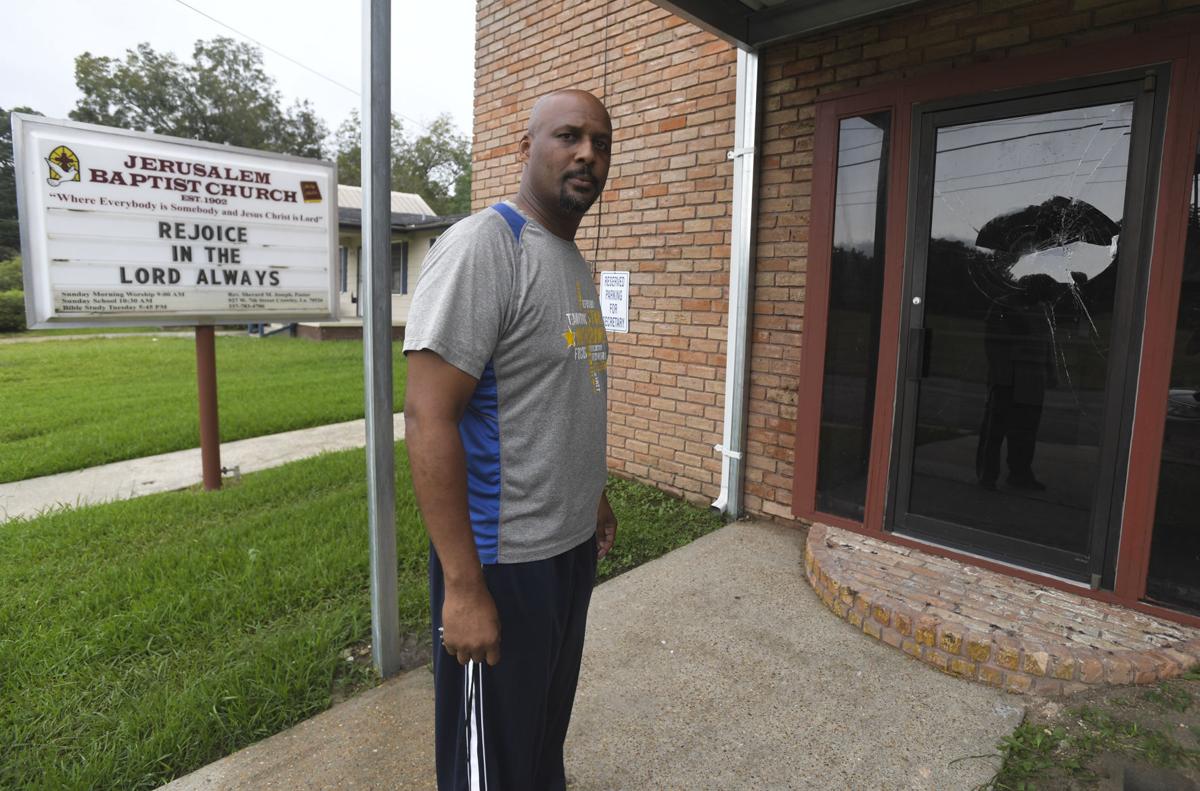 Paster Sherard Marlon Joseph stands for a photo by the door that was vandalized at Jerusalem Baptist Church on Monday, October 21, 2019 in Crowley, La.. 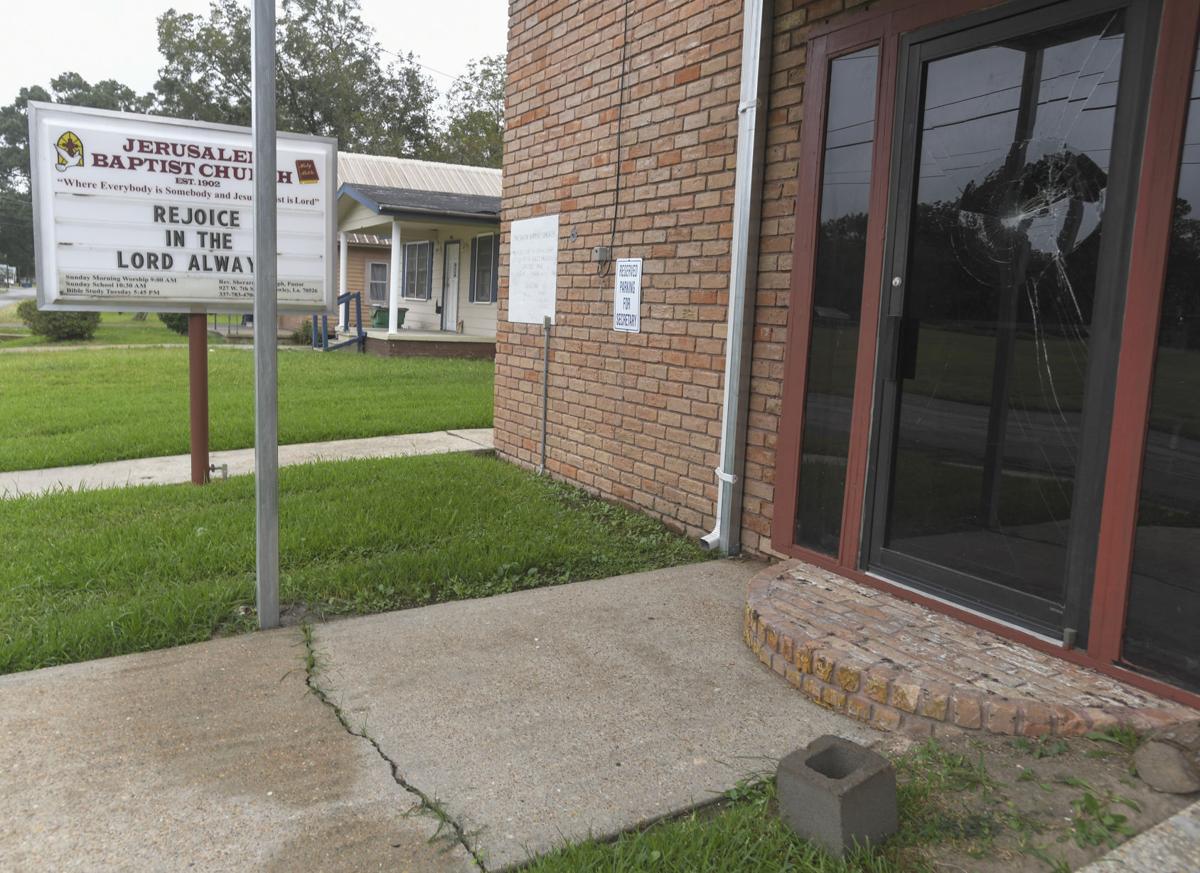 The brick, bottom right, that was used to vandalized one of the doors of Jerusalem Baptist Church sits outside of the church on Monday, October 21, 2019 in Crowley, La.. 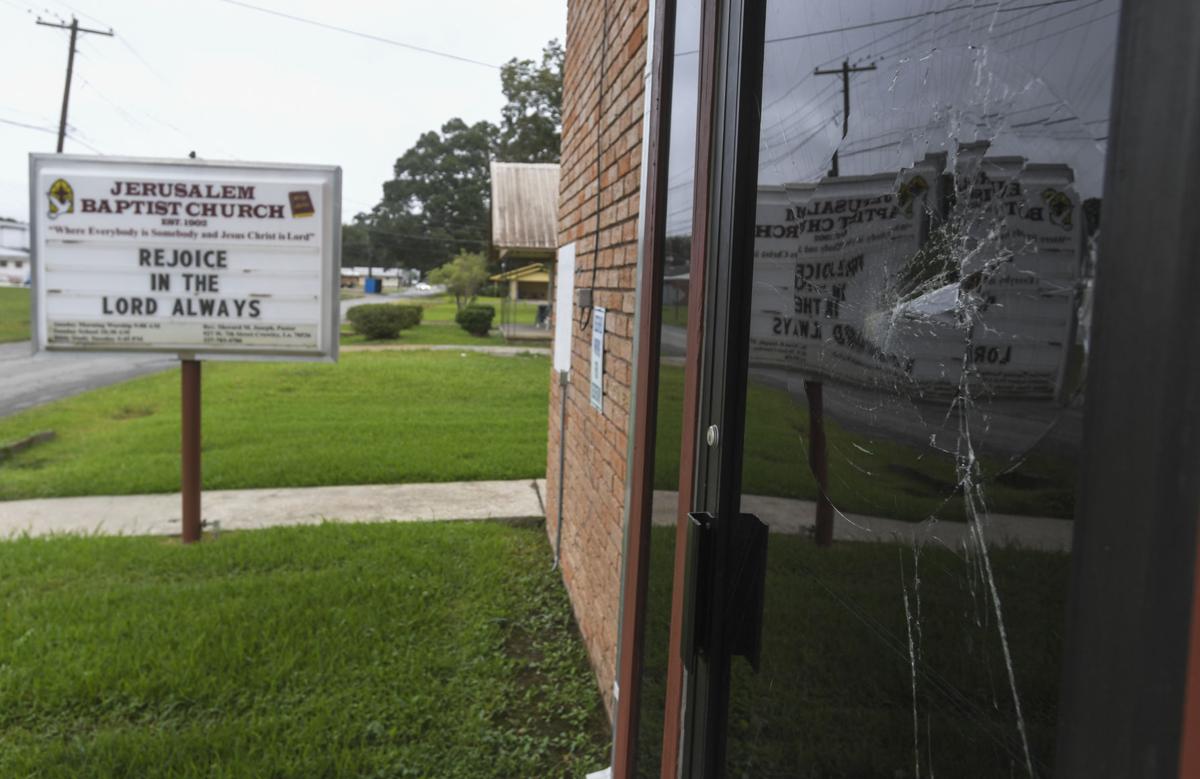 One of the the doors that was vandalized at Jerusalem Baptist Church on Monday, October 21, 2019 in Crowley, La.. 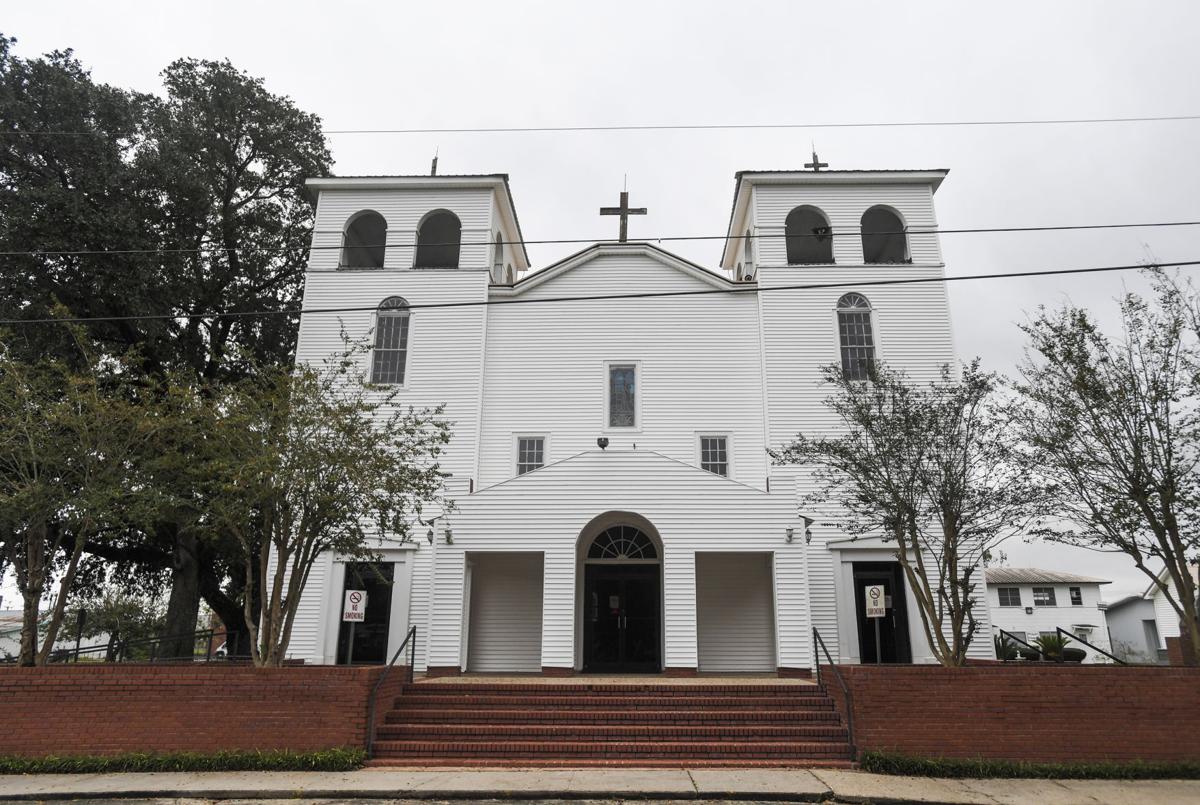 Paster Sherard Marlon Joseph stands for a photo by the door that was vandalized at Jerusalem Baptist Church on Monday, October 21, 2019 in Crowley, La..

The brick, bottom right, that was used to vandalized one of the doors of Jerusalem Baptist Church sits outside of the church on Monday, October 21, 2019 in Crowley, La..

Five churches in Crowley have been the target of vandalism in less than four months, and local police plan to get federal authorities involved due to the nature of the crimes.

All of the targeted churches had either a window or glass door broken with a heavy object — a brick, piece of concrete or padlock — during the quiet, overnight hours. Each of the churches is located in a section of the city that's predominantly occupied by African Americans. Three of the five vandalized churches are historically black.

"The reason we're saying it's a hate crime is because we've got churches in all sections of our city, and this is the only section that's getting hit," said Crowley Police Chief Jimmy Broussard. "And, of course, in the wake of all of the burnings in St. Landry Parish, we're taking all of this very seriously."

Three historically African American Baptist churches were burned to the ground earlier this year in St. Landry Parish. Holden Matthews is accused of setting fire to the churches between March 26 and April 4. His trial is scheduled for Feb. 10, 2020.

A Baptist church in Lake Charles was burglarized and set on fire last week.

Broussard said that even if racial motivation is ruled out in the vandalism case, the person or people responsible will be charged with hate crimes because churches have been the targets of the vandalism.

The most recent vandalism incident was discovered Monday morning at Jerusalem Baptist Church, where a brick was thrown into the church's glass door.

It was the second time the church's pastor had to deal with vandalism in less than a week.

The Rev. Sherard Marlon Joseph serves as pastor of both Jerusalem Baptist Church and Morning Star Missionary Baptist Church, which was targeted last Wednesday in the same way — with a brick thrown into one of the church's glass doors. Both are historically black churches.

"The response from our congregation here at Jerusalem has been, 'Man, they got us too,'" Marlon said. "It's sad, but all we can do is just laugh and shake our head. They got us too."

Vandalism was also discovered last Wednesday at First Church of the Nazarene, which has a predominantly white congregation. Again, a glass door was broken by a brick or piece of concrete.

Another glass door was found shattered by a brick or piece of concrete on Oct. 11 at St. Theresa Catholic Church, a historically black church.

The first incident happened in early July. In that case, someone threw a padlock into a stained-glass window at First Lutheran Church, which is a predominantly white church.

The Crowley Police Department will be turning over the case to federal authorities within a week or two because the vandalism incidents are happening more frequently and seem to be linked, according to Broussard.

"I would venture to say, and I'm making an educated guess on this, that this is the work of juveniles for this reason: Even your most hardened criminals or drug dealers were still taught by their mothers and grandmothers to respect God's house no matter what denomination it was," the police chief said. "They might do a lot of stuff, but they're not going to mess with the church."

If Joseph could speak directly to the person or people involved in the vandalism, his message would be this:

Anyone with information about any of the vandalism incidents is urged to contact the Crowley Police Department at (337) 783-1234.

Up to a $1,000 reward being offered for information on Crowley church vandalism incidents

Crime Stoppers of Acadia Parish is offering up to a $1,000 cash reward for information that leads to an arrest in a string of recent church va…