A Broussard Police units responds during an active-shooter training exercise Monday, June 11, 2018, at Southside High School in Youngsville, La. All Lafayette Parish law enforcement agencies, Acadian Ambulance and Youngsville Fire Department participated in the simulation. Youngsville Police Chief Rickey Boudreaux said school faculty and students also participated in the training as actors and as spectators. "It's a chance for us to check out the way the radio systems work, the way the emergency response happens, and being able to all work together as one team," Boudreaux said. 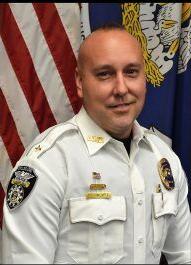 The assistant police chief of Broussard was fired Tuesday for failing to properly address sexual harassment complaints, according to minutes from a special meeting held the same day.

The Broussard City Council unanimously agreed to terminate Assistant Chief Christopher Galvez during Tuesday's 4 p.m. executive session, which was closed to the public. The minutes from the meeting, released Wednesday, include few details, noting only that the assistant chief was fired "for failure to pursue employee complaints and causing a lack of confidence within the police department."

Officers at the Broussard Police Department said they were notified Tuesday evening that Galvez, who is also facing allegations of sexual harassment, no longer worked there.

The city of Broussard issued a statement about the situation Wednesday afternoon.

"We can confirm that after the Council unanimously voted to discharge Assistant Chief Galvez, he submitted his resignation, which was accepted," Holly Cope-Lynn, spokesperson for the city of Broussard, wrote in an email. "The investigation is still ongoing, but we do plan to release a more detailed statement as soon as we are able to comment."

The assistant chief's termination happened one day after Broussard Police Chief Brannon Decou announced his retirement from an elected position with a term that didn't expire until the end of 2022. Decou has been under investigation for sexual harassment complaints by former officers that were made public in an Acadiana Advocate story that appeared in print April 18.

Galvez is accused of not properly handling sexual harassment complaints and of making inappropriate comments to officers and their spouses, according to public records and interviews with current and former officers.

In a detailed incident report filed last year with the Lafayette Parish Sheriff's Office, the wife of a former Broussard officer said Galvez made inappropriate comments and touched her in an unwelcome manner during the Police Department's 2019 Christmas party.

The former officer's wife, whose name is redacted in the Sheriff's Office report, said Galvez approached her during the Dec. 15, 2019, Christmas party and asked an explicit question about oral sexual preferences.

Galvez wrote in an April 28 email to a reporter that he denies all of the claims made in the Sheriff's Office report, which he described as "rumors fabricated by a pathological liar who was previously employed by the Broussard Police Department."

The woman's allegations echo those made by current and former officers, some of whom say they were asked the same question on the job.

Before the formal LSPO report was filed in May 2020, the woman's husband complained internally about the incident while still employed with the Broussard Police Department, according to an April 2020 email included in a public records request.

Lt. Coy Burke, patrol division commander, wrote in an April 29, 2020, email that he "passed on this information to Chief Decou at the next opportunity" as soon as it was brought to his attention. He also wrote that the officer was instructed "not to spread his negativity around" to where it would affect other officers' morale.

The officer, who asked not to be identified because he still works in law enforcement and cannot speak to the media in his current role, said in a phone interview that Galvez also asked him that same question on first day of work at the Broussard Police Department.

Galvez said he has never asked the complainant or any former officers the "fabricated question."

Sgt. Dirk Campbell of the Lafayette Parish Sheriff's Office wrote in the May 14, 2020, incident report that he obtained a written, voluntary statement from the woman but did not attempt to contact Galvez about the matter.

"She was scared to report this incident due to the fact (that) her husband was employed with the Broussard Police Department," Campbell wrote. "(She) advised that she only wanted this to be an incident report at this time."

The assistant police chief said he heard rumor that a police report may have been filed, but he was never notified of the report's existence.

"I can’t comment to her 'feelings,'" Galvez wrote. "I find this insane because I don’t have the power to hire or fire employees. In fact, I find this to be suspicious, because if it was as 'bad' as she’s making it out to be, it should have been reported when it happened; but it didn’t happen."

The city of Broussard issued a statement in response to the specific allegations made against the assistant police chief in the report.

"Some facts came out during the course of the ongoing investigation, which we cannot comment on," Cope-Lynn, spokesperson for the city of Broussard, wrote in an email last month.

Galvez began working for the Broussard Police Department in 2006 and was promoted to the assistant police chief position in 2018, according to the Police Department's website. He is also an adjunct instructor for LSU and a published author, the website says.

The city of Broussard is expected to complete its investigation into the Broussard Police Department by the end of the week.