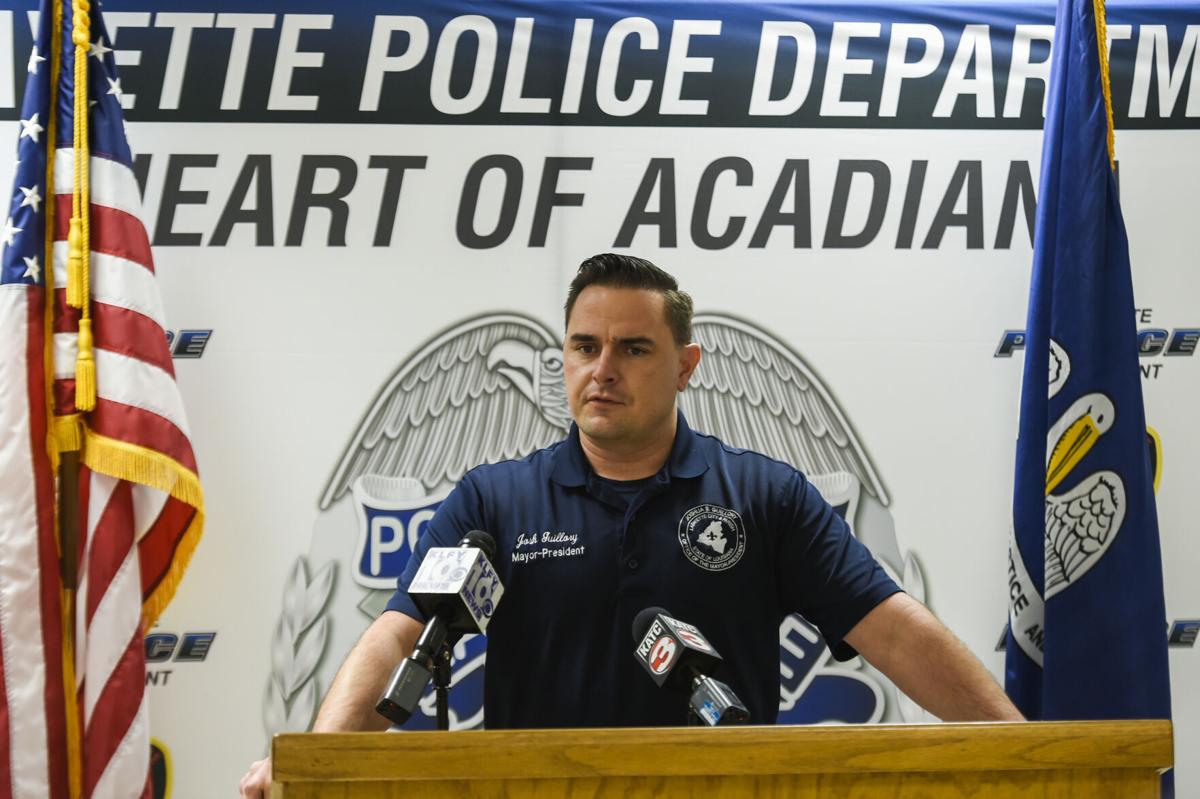 City-Parish President Josh Guillory speaks at a press conference to talk about the days activities surrounding the protests demanding justice for Trayford Pellerin at the Lafayette Police Station on Saturday, August 22, 2020 in Lafayette, La. 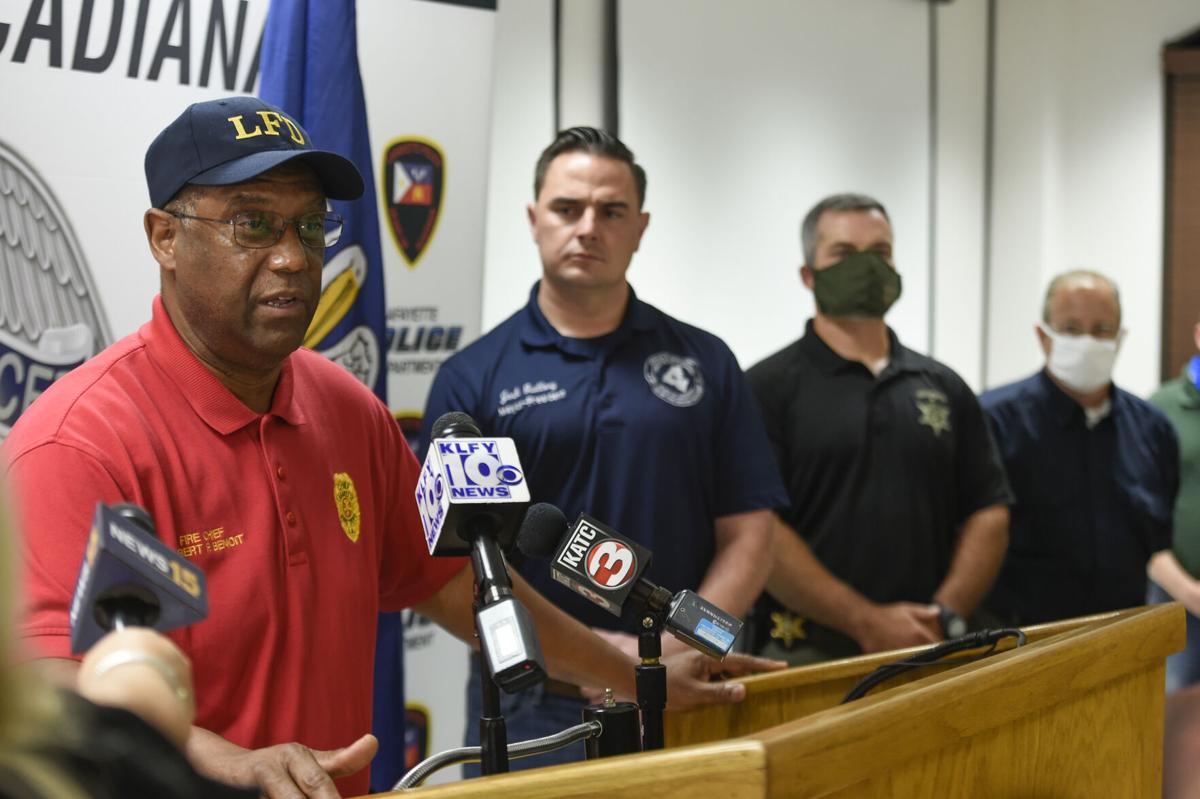 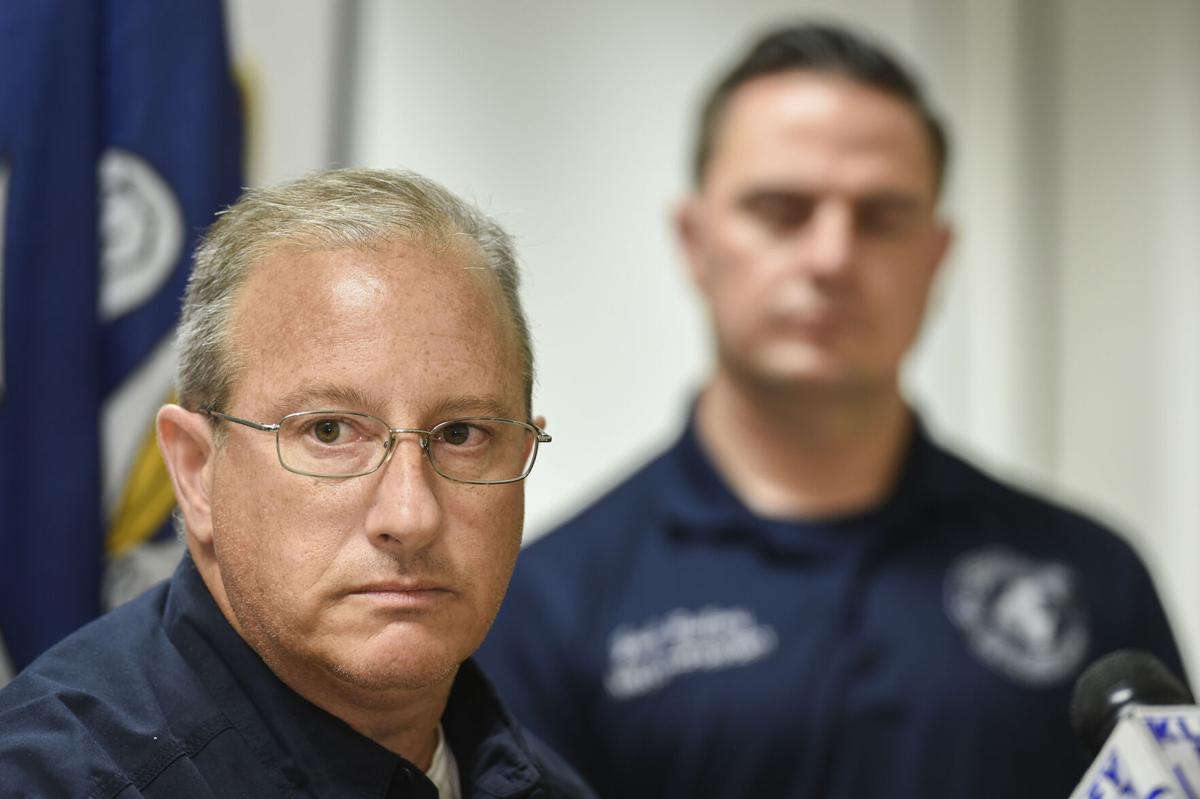 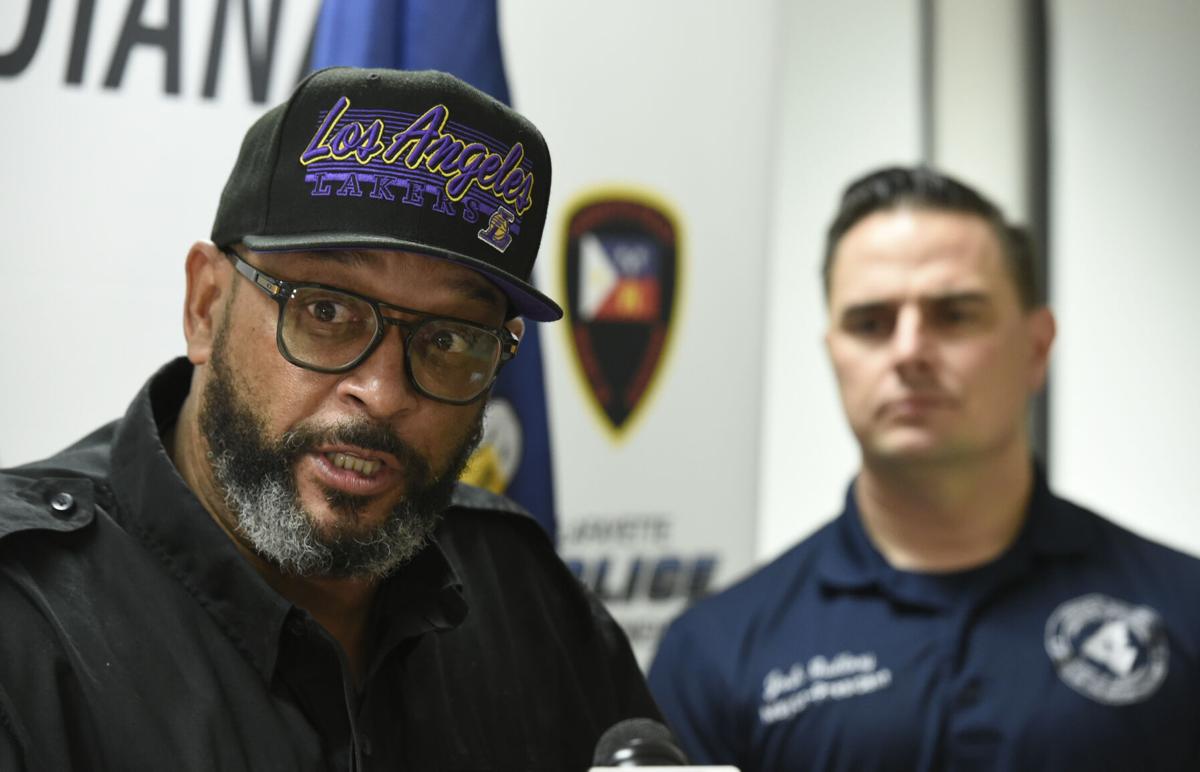 Parish Councilmen AB Rubin speaks during the City Parish press conference to talk about the days activities surrounding the protests demanding justice for Trayford Pellerin at the Lafayette Police Station on Saturday, August 22, 2020 in Lafayette, La.. 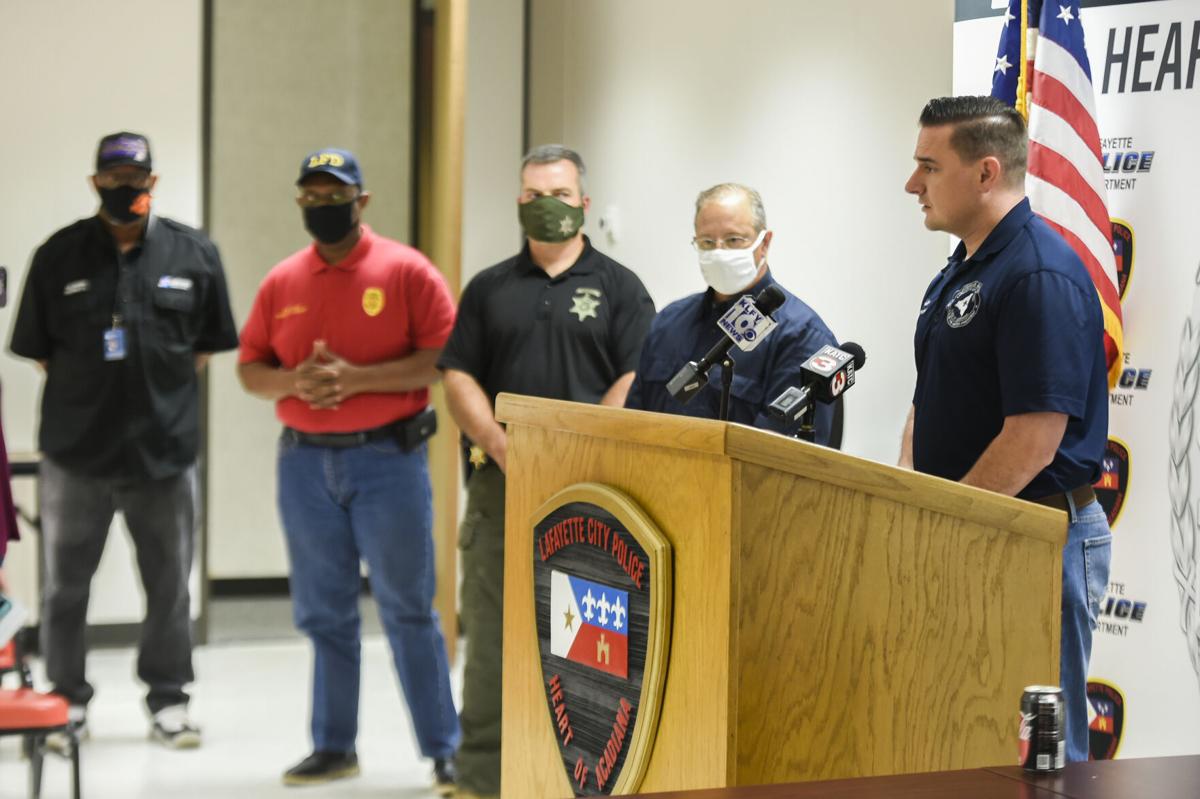 City-Parish President Josh Guillory speaks at a press conference to talk about the days activities surrounding the protests demanding justice for Trayford Pellerin at the Lafayette Police Station on Saturday, August 22, 2020 in Lafayette, La.

Parish Councilmen AB Rubin speaks during the City Parish press conference to talk about the days activities surrounding the protests demanding justice for Trayford Pellerin at the Lafayette Police Station on Saturday, August 22, 2020 in Lafayette, La..

Lafayette Parish Mayor-President Josh Guillory and law enforcement held a news conference Saturday condemning the behavior of protesters who they said threatened motorists and started fires earlier in the evening. Meanwhile, activists said Guillory should look internally at the role he and his administration have played in creating the charged climate.

The news conference came after hours of community rallying and protests following the fatal shooting of 31-year-old Trayford Pellerin at a gas station Friday. Pellerin was shot by police after a roughly half-mile foot pursuit, when law enforcement said he attempted to enter a gas station armed with a knife.

The rally built on tension between the Black community and Guillory’s administration. Guillory was a common point of conversation and criticism throughout the evening as both planned speakers and protesters delivering impromptu remarks called out his lack of support and demanded he come to the table to build better relationships with the Black community.

In a written statement Saturday night, Guillory backed law enforcement’s attempts to de-escalate the situation before Pellerin was shot. He said Pellerin was shot only when he tried to enter the convenience store, “threatening the lives of the customers and workers inside,” he wrote.

"While the incident has drawn significant media attention and protests, our personnel won’t be distracted — they remain focused on ensuring the health and safety of our people. … Our thoughts and prayers are with our community tonight, and with the men and women in uniform who put their lives on the line every day to keep us safe,” Guillory’s statement said.

Local NAACP leaders and activists decried Guillory’s leadership after being denied access to the late-night news conference. They waited outside the Lafayette police headquarters on East University Avenue until about 10:30 p.m. to share their own statements.

Several expressed disappointment in Guillory’s lack of compassion for not offering condolences to Pellerin’s surviving family. Regardless of the circumstances, or the eventual investigatory outcomes, a man was killed, activists said.

“Josh Guillory is lower than a dog for that,” activist Jamal Taylor said.

Guillory did not address Pellerin’s shooting at the Saturday night news conference but did declare that Lafayette is a law-abiding city and that law enforcement and city leadership will use all resources to combat unlawful protesting.

“We are a peaceful community and we will give up not a single inch of the city of Lafayette or the parish of Lafayette. We’re different. This isn’t Seattle, this isn’t other cities across the country. We respect the rule of law,” Guillory said.

“I’ll say it. Our mayor is racist. Everything he has done since he’s been in office has impacted the African American community negatively. It’s time for this to stop,” Broussard said.

Broussard said community activists will gather at Lafayette City Hall Sunday at 5 p.m. to address Guillory and law enforcement leaders with their concerns and criticisms. They challenged the local officials to attend.

A protest Saturday night along Evangeline Thruway, where 31-year-old Trayford Pellerin was shot and killed by Lafayette Police a day earlier, …

What eventually became a protest march began as a peaceful rally on Evangeline Thruway where Pellerin was shot and killed by Lafayette police a day earlier. After more than an hour, the crowd spilled into the roadway, blocking traffic in in the northwest lanes and chanting, "No justice; no peace."

Organizers of the rally attempted to move people from the road. However, about 6:45 p.m., a crowd of about 150 people moved down the thruway to block the intersection with Willow Street.

Shortly after dark, as part of the crowd headed back to the Shell station, rocks and water bottles were thrown at police cars. Some eventually split off and marched to the Lafayette Police substation on Moss Street. They were met by police in riot gear, who eventually deployed smoke grenades to break up the crowd.

Interim Police Chief Scott Morgan said there were several protesters arrested Saturday but did not confirm a number or elaborate on counts. Morgan said in addition to blocking traffic, protesters shot fireworks at buildings and started fires along Evangeline Thruway. He said the acts were “malicious” and participants should be ashamed.

Broussard and others gathered Saturday were some of the organizers of the original peaceful rally at the Shell station on Chalmette Drive and Northwest Frontage Road. They said while they don’t agree with violence or destruction in the city — especially from potential outside bad actors — people also shouldn’t be demonized.

“The mayor-president and the Parish Council must have a reckoning with themselves tonight and ask themselves the question: Are the streets of Lafayette safer tonight or are they less safe because of my leadership?” said Devon Norman, Lafayette NAACP young adult committee chairperson.

The family of a man shot and killed by Lafayette police Friday says they are mourning and in disbelief, and their attorneys say they will be s…

The shooting of Pellerin was captured on video by a bystander and shared widely on social media. It shows at least five Lafayette police officers approaching a Black man with what witnesses said was a knife in his hand while walking away from police toward a convenience store. Video then shows officers open fire near the entrance of the convenience store and at least 10 shots can be heard.

The man is then seen lying on the ground.

A State Police spokesperson said the Lafayette officers were called to a disturbance involving Pellerin about 8 p.m. Friday. They pursued Pellerin, who they say was holding a knife, and deployed stun guns, which State Police said were ineffective. When Pellerin reached the Shell gas Station, police shot him.

Lafayette residents gathered Sunday for a second night of protests, this time beginning in front of Lafayette City Hall, where they voiced con…