Decou addressed the May 10 retirement letter to Broussard Mayor Ray Bourque, Louisiana Secretary of State Kyle Ardoin, the staff of the Broussard Police Department and the citizens of Broussard. He also emailed the letter to local media outlets.

"After much consideration, I have decided it is in the best interest of the community and my family that I retire from my position as Chief of Police," Decou wrote in the letter. 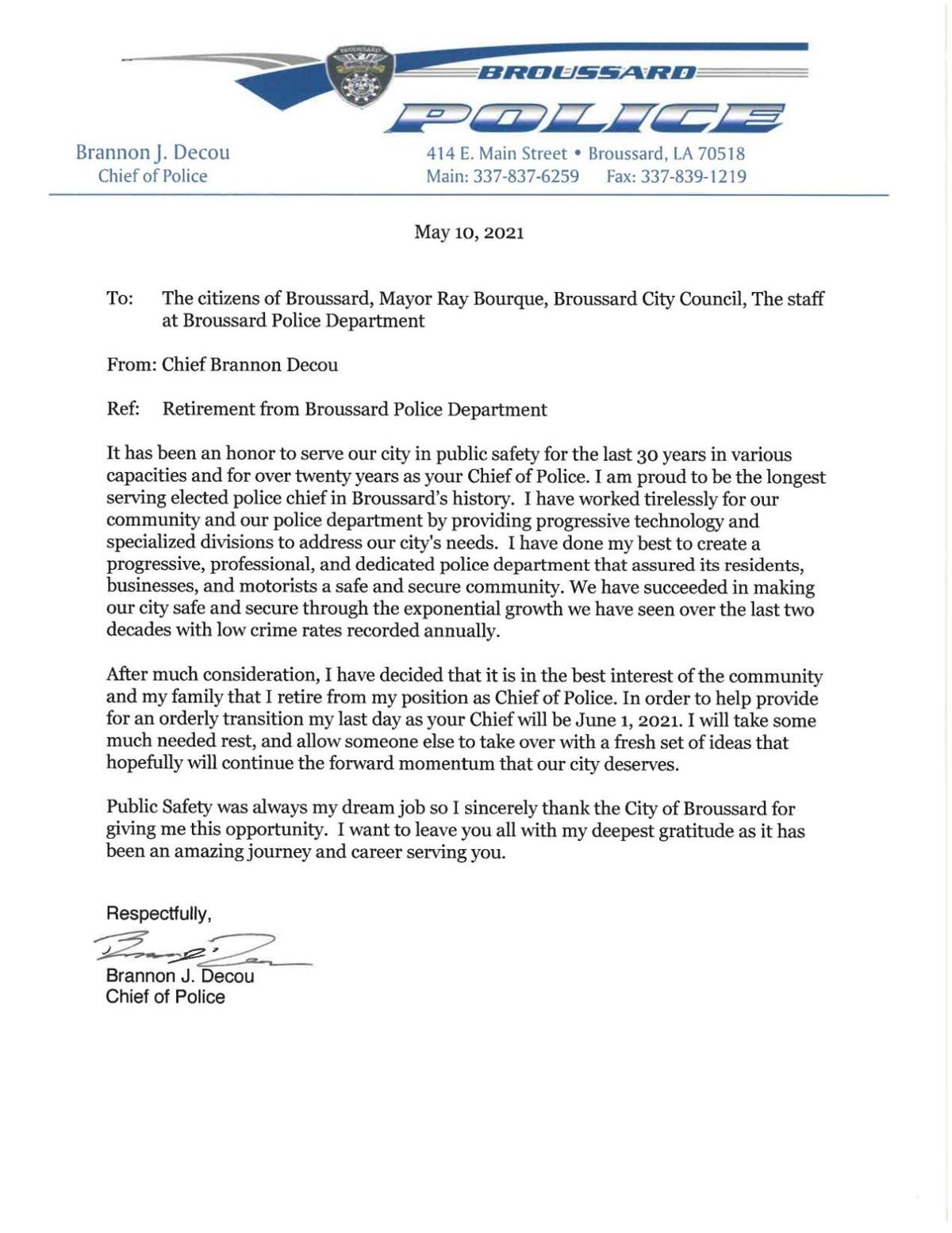 Decou, who has served as police chief for 20 years, said he will remain in his elected position through June 1 to provide "an orderly transition." Voters elected Decou to serve through the end of 2022.

"I will take some much needed rest, and allow someone else to take over with a fresh set of ideas that hopefully will continue the forward momentum that our city deserves," Decou wrote. "Public Safety was always my dream job so I sincerely thank the City of Broussard for giving me this opportunity. I want to leave you all with my deepest gratitude as it has been an amazing journey and career serving you."

"I have been in constant communication with our police commanders, and I want our City to rest assured that the Broussard Police Department has been running smoothly, actively policing our community, and will continue to do so," the mayor said in a prepared statement. "It is our sincere desire that our police force and our city move forward with a fresh start and a renewed commitment to each other and to the residents and businesses of Broussard."

Sexual harassment allegations against Decou were made public in an Acadiana Advocate story that appeared in print April 18. In that article, three former officers described a work environment in which individuals were hired and promoted based on appearance, unwelcome sexual advances were the norm and anyone who voiced concerns faced retaliation.

In the three weeks since, Broussard leaders announced they were investigating the police chief, the Broussard City Council met in three special executive sessions and Decou took voluntary paid leave from his elected position. Nine more people have also spoken with a reporter about Decou's alleged misconduct during that time.

Decou did not address the sexual harassment allegations or the city's investigation in his retirement letter. Instead, the police chief detailed how he worked to keep the community safe through the city's growth over the last two decades.

"I am proud to be the longest serving elected police chief in Broussard's history," Decou wrote. "I have worked tirelessly for our community and our police department by providing progressive technology and specialized divisions to address our city's needs."

City officials have released few details about their ongoing investigation into the police chief but have promised to disclose more upon its completion. A city spokesperson said on April 30 that the investigation was expected to be completed within two weeks.

The assistant police chief of Broussard was fired Tuesday for failing to properly address sexual harassment complaints, according to minutes f…