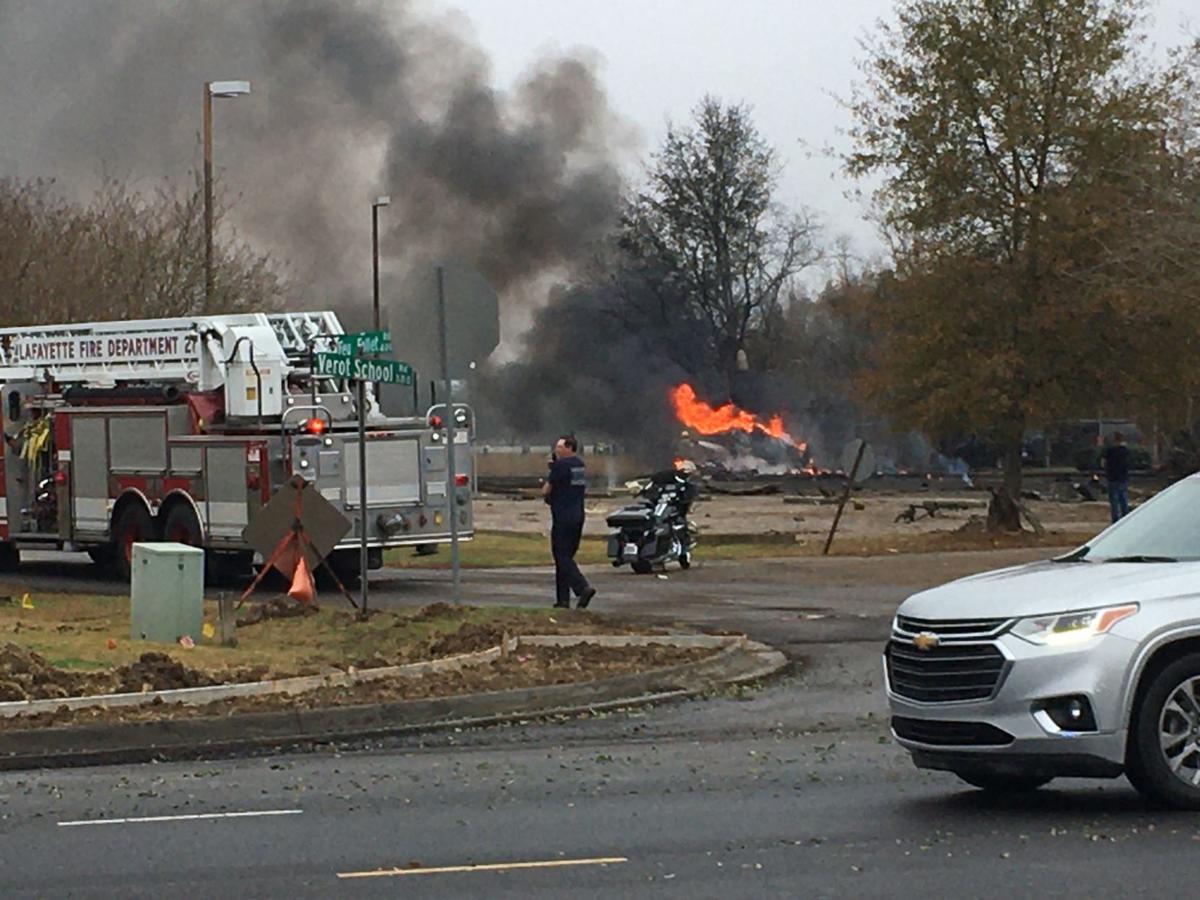 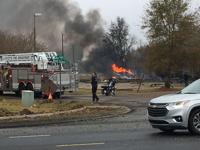 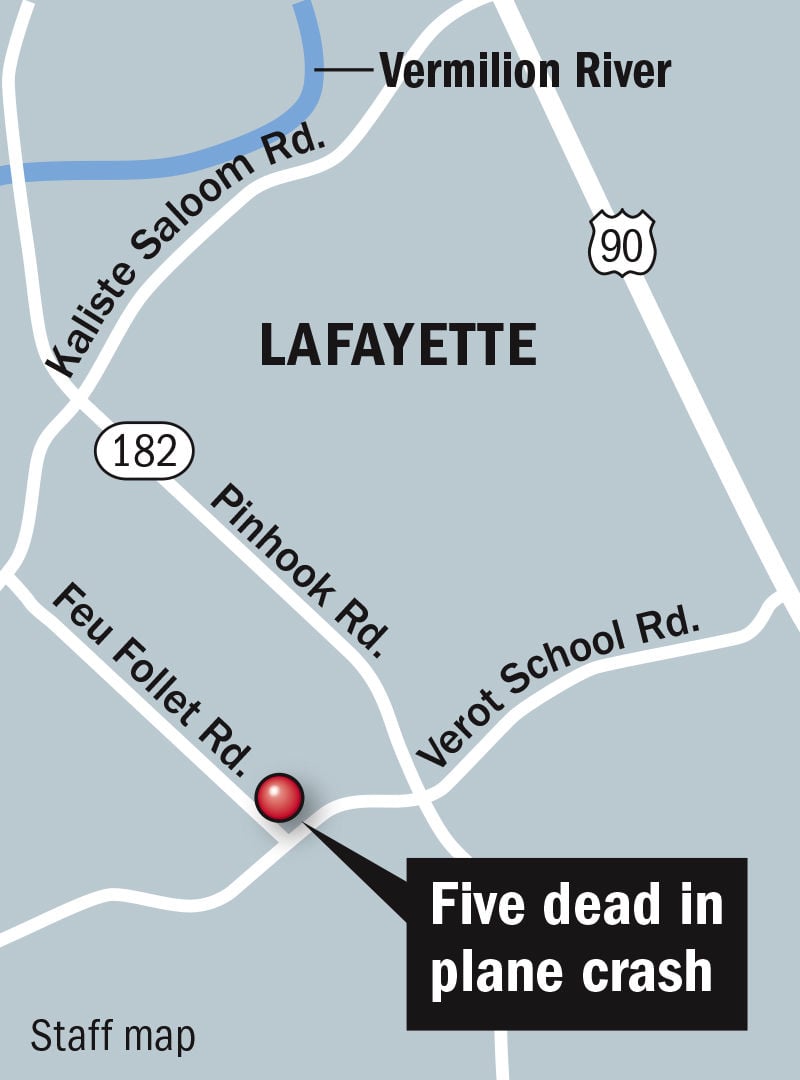 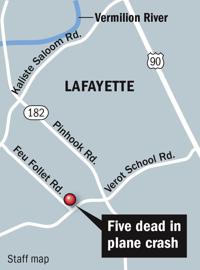 The victims in a Saturday morning plane crash in Lafayette that claimed five lives and injured four others have been identified.

Here's what we know about the victims:

The sixth person aboard the plane was Stephen Wade Berzas, 37, who is hospitalized in critical condition at Our Lady of Lourdes Regional Medical Center.

The small plane crashed into the parking lot of a post office at the intersection of Verot School and Feu Follet roads in Lafayette at about 9:20 a.m. Saturday, where it killed five people and fully engulfed a car on the ground in flames.

The plane was en route to a college football playoff game in Atlanta between Louisiana State University and Oklahoma, said Steven Ensminger Jr., who told The Associated Press that his wife, Carley McCord, was on board. Ensminger Jr. is the son of the offensive coordinator for the LSU football team. McCord was a sports reporter.

Four people were brought to the hospital. Berzas, a passenger on the plane, is in critical condition at Lourdes and a woman who was on the ground is at the burn center at University Medical Center in New Orleans. In addition, two post office employees were brought in for evaluation, said Lafayette Fire Department spokesman Alton Trahan.

Berzas works as vice president of sales for Global Data Systems, according to the company's website. He is also the step-father of two students at Notre Dame High School, according to a Facebook post by the school.

"Our prayers are with the families and loved ones of those who perished in this morning’s plane crash in Lafayette, especially the survivor - Wade Berzas - husband of Makenzie and step-father of ND students, David & Brayden Broussard," the school's post said.

Danielle Britt, store manager of Andy's Jewelry, was on the ground when the small plane carrying six passengers crashed, according to a Facebook post from her husband.

"She has burns ~30% of her body. Mostly on her right side," he wrote. "She is in great spirits so far and all vital signs are OK. For those of us that know her well, know that she is as tough as they come."

A Facebook post by Andy's Jewelry says Danielle Britt's car was hit by debris from the crashing plane.

Lafayette pilot Tim Skinner said he was at the gym when the crash occurred. He saw numerous missed calls and messages on his phone by the time he was finished working out at 10 a.m. Saturday.

Although he didn't know the pilot or victims of the crash personally, Skinner said he is a friend of Chuck Vincent, the CEO of Global Systems, who Skinner said owns the plane.

Troy Wayman, president and CEO of One Acadiana, said he didn’t know any of the victims personally but knew of them as local business leaders.

"Any time you lose any type of business leader within the community, it’s a tragedy," Wayman said. "And people who were as high profile as some of these folks — it’s just a horrific event — to even lose five or six lives at one time alone is horrific."

The plane went down in a part of the city with a scattering of banks, fast food chains, apartments and other businesses.

Marty Brady, 22, said the lights went out at his apartment a couple of hundred yards or so away from the crash site as he was preparing to make coffee.

He said he ran out and saw black smoke and flames from the post office parking lot and downed power lines.

“There were some people screaming and somebody yelled that it was a plane,” he said.

Brady said the plane clipped a power line over the gate to his apartment complex.

"If it had been a little lower, it could have been a lot worse,” he said.

Tributes began pouring in for the victims on social media as officials publicly confirmed their identities Saturday afternoon.

"Thank you Lord Jesus for the time my family had with the lovely, selfless, beautiful-hearted Gretchen David Vincent who ALWAYS showed up when her friends were in need and the bold, strong-willed, outgoing, great friend of 13 years to our Callie, Walker Vincent," Leslie Jo Jacobs wrote on Facebook. "It has been said that 'only the good die young' and nothing could be more true in this instance. God must’ve needed them in His LSU box up in Heaven for something really special. We miss you both so very much already. We will love you always!"

Wayman said he spent Saturday morning checking in with friends who were flying to Atlanta for the LSU game.

Although those he is closest to confirmed they were safe, Wayman said he still dreaded finding out who the victims were in the plane crash.

"I was very worried, very worried," Wayman said. "Any time you’ve got this many people flying to Atlanta for a football game like this, I knew we were going to be dealing with someone from Lafayette that was important to the community."

Skinner said his friends and family checked in all morning to be sure he wasn't piloting the plane that crashed as the close-knit pilot community quickly pieced together who was on the plane.

"When someone dies in your community, it's tragic," Skinner said. "I've had a lot of buddies die since '79 when I became a pilot. It sometimes makes me wonder if I should continue flying myself. But it's still a safe method of transportation, all things considered."