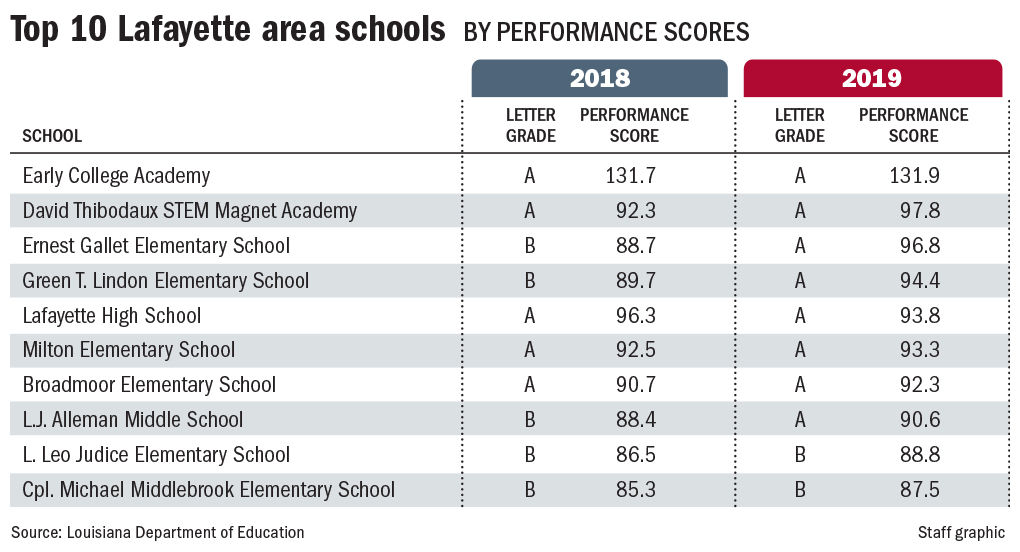 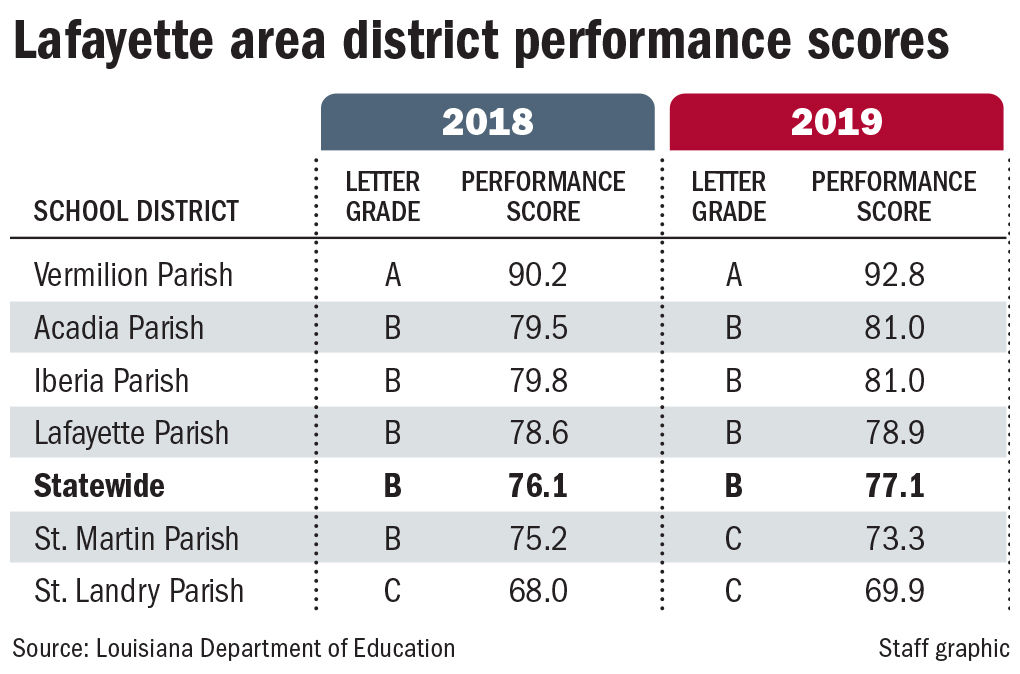 Lafayette’s public school system maintained a steady “B” rating on the state’s annual performance assessment, with two-thirds of district schools showing score improvements and 10 schools improving at least one letter grade, according to school performance scores released by the Louisiana Department of Education Wednesday.

Lafayette’s district letter score remained solidly at a “B,” with the numerical score increasing slightly from 78.6 points last year to 78.9 points this year. The Lafayette Parish School System’s score was a couple points ahead of the statewide score, which reached 77.1 points this year.

Mark Rabalais, chief academic officer for the Lafayette Parish School System, said district leadership is proud of the school system’s progress, especially strong student progress scores across all schools and letter grade increases at several schools. The aim is to build off that momentum for continued improvement, he said.

“We had some schools with phenomenal growth,” Rabalais said. “Though there may be some achievement indexes that weren’t as high as we wanted, we know that those progress indexes show the kids are making the move in the right direction and we plan to build off that to set further targets and hit higher goals in the future.”

This is the second year of scores under the state’s more rigorous evaluation plan, which increased student proficiency from a score of basic on the LEAP exam to a score of mastery. By 2025, the goal is for an average student in an A-rated school to achieve mastery or above on the state tests.

The move aims to bring the state in line with the federal Every Student Succeeds Act, which requires states to better improve students’ college and career readiness and aid at-risk populations in all schools, but especially persistently struggling schools.

“These are very positive signs that the improvement plans being put in place by K-12 schools and early childhood centers are showing progress, but progress is only progress. It doesn’t mean we’ve reached the quality bar and we still have many schools and centers on the list for improvement,” he said.

About half of Lafayette students made satisfactory progress toward subject mastery in English and math from the 2018 to 2019 school year, Loui…

Under the state’s performance score system, schools are graded on a 0-150 point scale and receive letter grades of “A” through “F.”

High school scores look at state assessment performance and progress, combined with ACT performance, diploma strength and the school’s graduation rate. As part of the state’s ESSA changes, the minimum ACT score needed to achieve mastery increased from 18 to 21.

The state decreased the score needed to earn an “A” grade from 100 to 90 points to offset the more rigorous standards. That change will gradually revert in coming years; in 2021 the minimum score for an “A” will rise to 95 and in 2024 it will return to 100 points.

During a Wednesday conference call, White highlighted the success of school districts that implemented a targeted zone strategy to address the needs of their persistently struggling schools. He specifically highlighted East Baton Rouge Parish’s gains and complimented the school system’s commitment to a Tier 1 curriculum, teacher training and support services, and ongoing professional development for educators.

These are similar focuses Lafayette administrators and school board members have highlighted as critical to the district’s improvement strategy. When questioned about Lafayette’s similar strategy, White said Lafayette Parish wasn’t highlighted during the conference call because the state isn’t yet seeing significant progress from the district’s persistently struggling schools.

“My sincere hope is their strategy will pay dividends and we’ll be talking about Lafayette Parish next year,” White said.

Rabalais said district leadership is confident the system’s Transformation Zone schools, those requiring comprehensive intervention to improve performance across all student groups, are on course for great gains. He said Transformation Zone leaders are building consensus around the district’s plan and ensuring school leaders have the resources to support teachers and improve student learning.

‘One of the best in the nation’: Early College Academy celebrates National Blue Ribbon award with pep rally

For Faulk it was a slide from 2018, when the school broke into the “D” grade category. Though the school’s performance score only changed by 1.3 points, it was enough to drop the school into a lower letter-grade category.

Carencro High saw the largest point decline, dropping from a “C” score with 68 points to a “D” score with 59.9 points.

Rabalais said district leaders want “all schools to continue to improve and show growth” but they recognize there may be hiccups for several reasons, including population transience, staffing changes, curriculum problems and other variables. Even in schools with dips there are pockets of greatness and the district is working to maintain and expand those strengths, he said.

“If we tweak things and focus on improvement, we feel like we can find a way to remediate those deficiencies,” Rabalais said.

Lafayette Parish schools saw LEAP score growth this year, both in the combined mastery category and in the individual English language arts, …