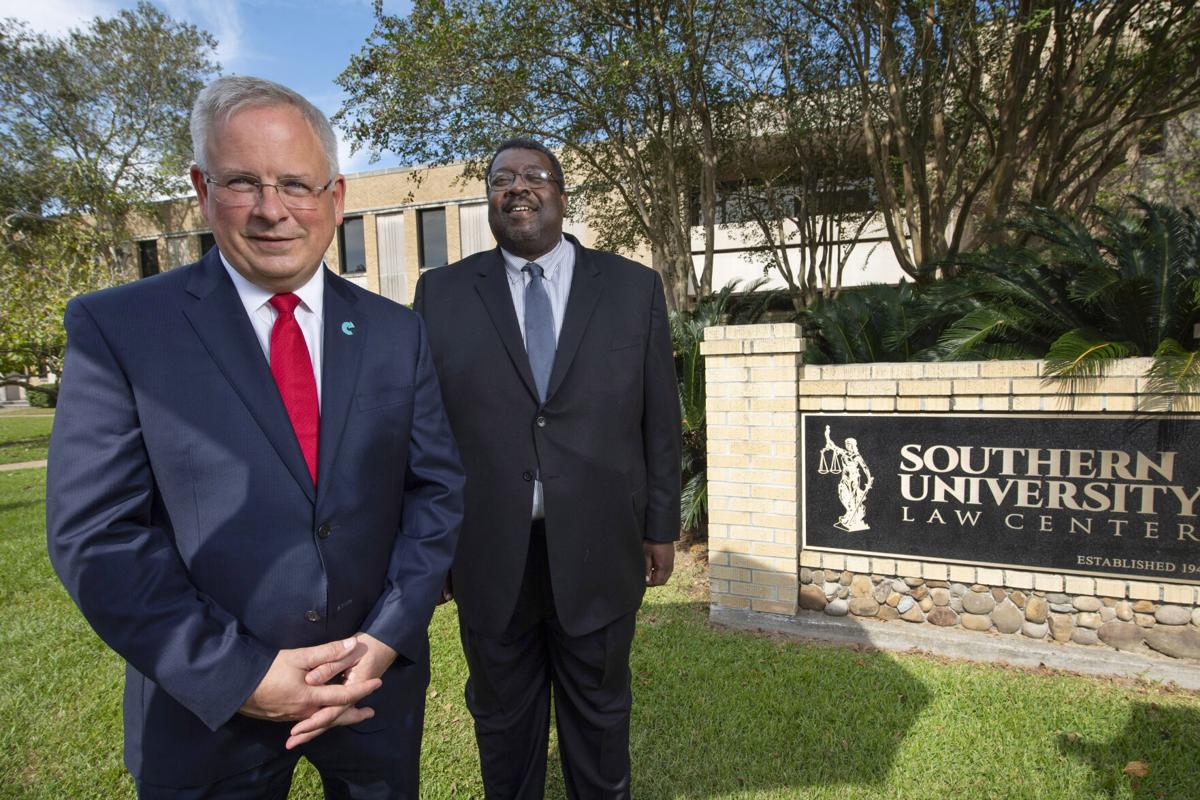 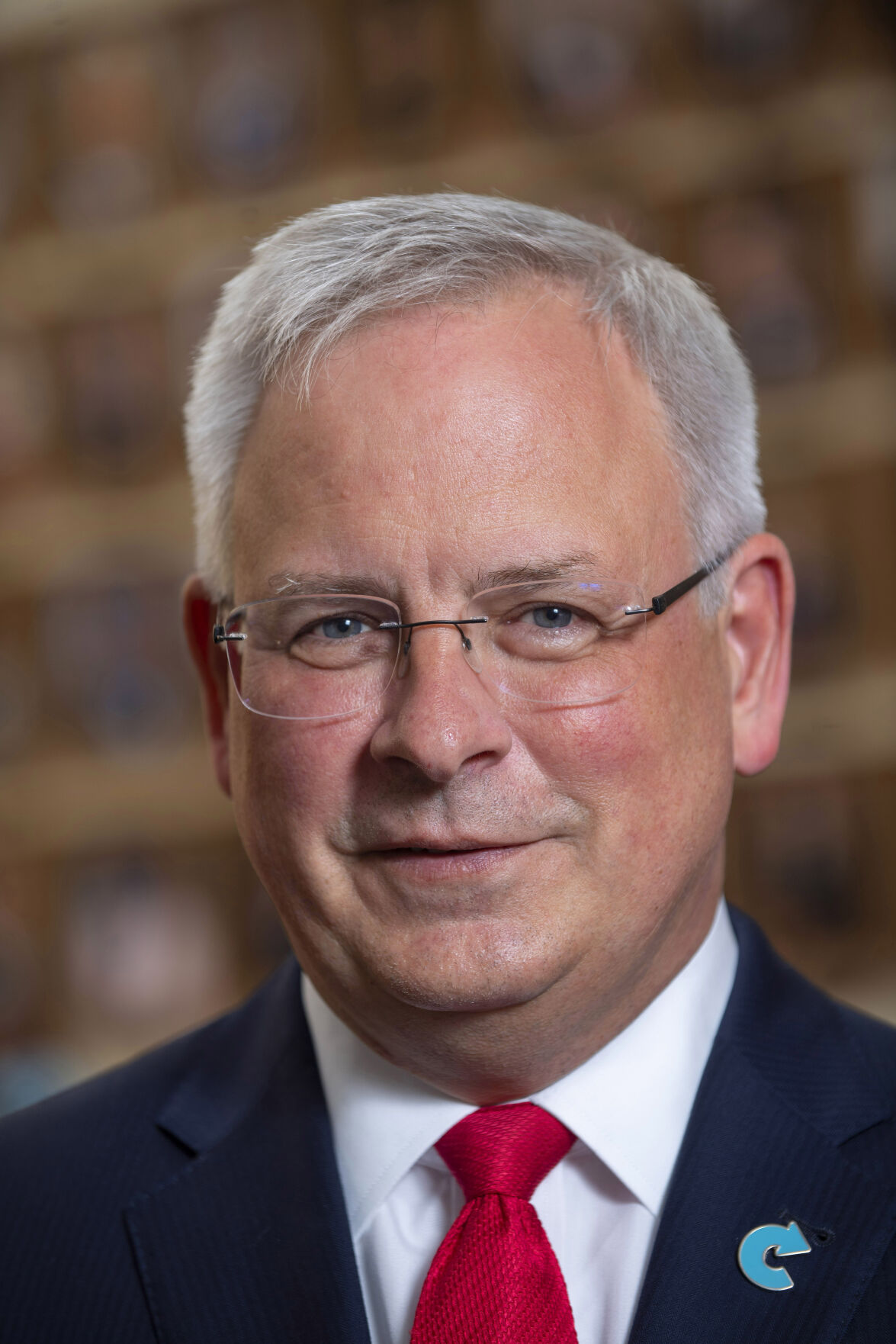 Jim Henderson, president of the University of Lafayette System, Oct. 26, 2021.

Jim Henderson, president of the University of Lafayette System, Oct. 26, 2021.

With what time he can muster, University of Louisiana System President Jim Henderson has found a new way to maximize his off hours — he’s pursuing a law degree at night at the Southern University Law Center in Baton Rouge.

“It’s a personal pursuit, not a professional one,” said Henderson, who is in his second year in the program. He’s taking 11 credit hours this semester — all on Zoom — from his kitchen table in Baton Rouge. Classes are from 5-9 p.m. Tuesdays and Thursdays and for a couple of hours on Saturdays. He hopes to complete the part-time program in three or four years.

“I’m keeping my other obligations in mind,” he said this week. “That’s the beauty of the part-time program and the way Southern has set it up. The only option I can take is the part-time, evening program.”

Not that it hasn’t been a challenge. Henderson in fall 2020 had to drop a class when Hurricanes Laura and Delta wreaked havoc on many of his system’s campuses, with the worst damage at McNeese State University in Lake Charles. That schedule change was not out of order for the part-time program; Law Center Chancellor John Pierre said Southern accommodates students from myriad busy backgrounds. They included former Gov. Mike Foster, who attended law school while holding office; other elected or appointed officials; and professionals like military officers and project engineers whose schedules may cause them to rush around the globe at a moment’s notice.

“Evening law students balance work, families and everything else,” Pierre said. “But he is doing it successfully. In spring 2021, he was off to a good start and then COVID (variant) hits. We had to make some schedule adjustments, get him out of his normal cycle. We got him through the summer. He’s doing well, real well.”

Henderson, who has led the nine-institution state system with 90,000 students for five years, started his law school journey with encouragement from two inspirational women: Ashley Mitchell-Carter, a Southern University Law Center alumna and former director of governmental affairs for the University of Louisiana System, and Henderson’s wife of 28 years, Tonia. Mitchell-Carter was the “impetus” to getting him started, he said.

She joined the system office as vice president of legislative affairs, Henderson said. He would challenge her in conversations about legal matters, a give-and-take that was fun for both of him. She, in turn, would encourage him to pursue a law degree and told Pierre she thought Henderson might be interested.

“She was one of those personalities, when you encounter her, you felt better,” Henderson said of Mitchell-Carter, who, like Henderson, came from northwestern Louisiana. “She had an infectious smile and engaging personality. She was always telling me, ‘You have to go to law school.’”

Erath memorial evokes memories of 8 storm victims, and one man's promise to honor them

The young lawyer died unexpectedly on a holiday weekend in 2019. When Henderson consoled her mother, she told him, “She really wanted you to go to law school.” Later, he mentioned his desire to go to law school to his wife, who responded, “Why don’t you?” That was all the encouragement he needed.

Pierre said he, too, encouraged Henderson to get his application together and take the law boards. Henderson’s application met the standard and he started the night program. Southern’s law school opened to students in 1947; the night school was initiated in 2004.

Pierre said law school “sharpens your analytical skills, gives you insights.” He said it’s a helpful degree not only for lawyers but for many leaders.

“Many students don’t practice law, but graduate into leadership positions,” he said.

“That’s not the driver,” he said. “It’s about the process. I’m inclined to read — a lot — and it helps me in my current work. It develops critical thinking skills. It has made me more effective as a leader.”

But he said providing pro bono work sometime in the future — helping people who can’t afford access to the law — might be a possibility someday. “I’ve always been interested in the pursuit of justice,” he said.

He also teaches a doctoral course every fall, and he said re-engaging in the classroom has given him more empathy for his students.

Tonia Henderson said her husband has “gone through a lot of schooling” during their marriage and he is a constant reader. He earned his master’s and doctorate while they were married. He also has routinely taken coursework where available — he oftentimes takes Massive Open Online Courses, or MOOCs — most recently one in Irish literature. “He’s always trying to learn new things,” she said.

His penchant for lifelong learning made an impact on their three children; only the youngest lives at home now. She says she gets inspired by watching him use his time so well. He allots time for work, family and his own study.

On class nights, she said, she prepares dinner around his schedule. He places his computer on the kitchen table so he can stay involved with the family. Sometimes, she’ll slip him a glass of wine if the camera is off.

Henderson said his wife, who owns her own media consulting business, provides the structure he needs to keep on schedule. This week, he was preparing to fix a faucet in the home when she gave him a reminder: “Don’t you have class in 10 minutes?” He did.

“Zoom has been the method of delivery with our courses. We have discussions, queries. It’s a better virtual business model for our students,” he said.

Pierre said he was confident Henderson would succeed at law school. The two men have known each other for years; Henderson was chancellor at Bossier Parish Community College and president at Northwestern State prior to taking the system job. He’s been with state government for 20 years. Pierre has been at Southern University Law Center for 30 years.

“He loves learning, he loves coming to class and is enthusiastic,” Pierre said. “I think those are exemplary traits for a higher education leader.”

Henderson said Southern has providing him and other part-time students “an incredible experience” through the law center. He said he’s proud to attend a school with Southern’s history and a law school that has championed many noble causes.

He said Southern has “incredible alums,” including that cherished colleague and alumna who believed in him and helped nudge him onto the law school path.