Kathleen Blanco with her husband, Raymond, and their grandchildren. A shy, serious child, Kathleen became the first in her family to graduate from college. 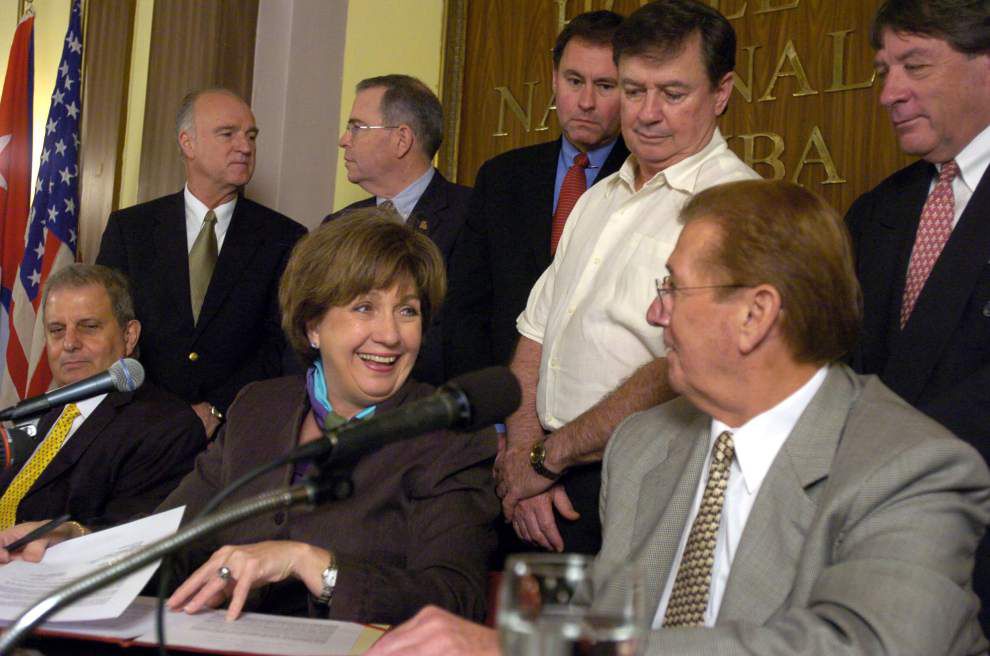 Kathleen Blanco with her husband, Raymond, and their grandchildren. A shy, serious child, Kathleen became the first in her family to graduate from college.

Former Gov. Kathleen Blanco’s death on Aug. 18 came as the academic research center intended to honor her legacy is beginning to take off.

A little more than a year after the University of Louisiana at Lafayette announced plans for the Kathleen Babineaux Blanco Public Policy Center, the center has hired a director and secured funding for its first research project. Contracts for two other projects are close to being signed, said the director, Stephen Barnes, who started his job 2½ weeks before Blanco died from complications related to cancer.

The center was conceived after Blanco decided to donate 90 boxes of files from her four years in office, including the catastrophic year of 2005, when hurricanes Katrina and Rita laid waste to south Louisiana. The Blanco center’s permanent offices, which are planned for the Edith Garland Dupré Library but have not yet been constructed, will house the files.

In addition to Barnes, the center aims to hire a full-time archivist and a team of researchers, and it will also engage other university faculty and students in its work. Barnes said he expects the center’s first reports to be published in late fall. Those near-term projects, seeded with grants of less than $100,000, are focused on the fields of education, public services, and poverty and economic development.

Barnes said he and other faculty are working on larger grants for more comprehensive projects in other fields, including criminal justice reform. The initial focus areas align with the stated mission of the center, which is to focus on issues that Blanco championed, according to the center’s website.

Yet Barnes, who is an economist by trade, said he spoke with Blanco last fall while interviewing for the job about expanding into other areas as well. These include coastal restoration and health care.

“The center very much needs to have a forward-looking vision, and to be prepared to adapt and move into focus areas that might be important down the road, some of which we may not even see today,” Barnes said.

He said the discussion with Blanco was “a great exchange” and she reminded him that she helped usher through the legislation that created the state’s Coastal Protection and Restoration Authority after the hurricanes. That helped Louisiana's leaders focus on the coast in a more "concentrated, integrated and long-term planning kind of way," Barnes said.

“To me, that’s a great model for what we can do here in Louisiana,” Barnes said. “Identify problems, tackle them in a serious way, bring research to bear to inform the decision-making process, and then share our successes with the rest of the country and the world so that we can be an example.”

The center was founded with $2.7 million primarily from private gifts, according to a university news release last summer. The university is committing funds to the operating budget, Barnes said, although he said it’s too early to specify what that is.

The center eventually is to occupy 4,500 square feet in the Dupré Library, with separate rooms for the archives, research work and general study. Architectural plans are complete, and a construction estimate is in the works, said Jordan Kellman, dean of the College of Liberal Arts. He said he expects the space to be ready for use in fall 2020.

Barnes comes to the center from his previous position as professor and director of the Economics & Policy Research Group at LSU. Barnes helped change the name of the research group to reflect its focus on public policy, which he said is the reason he became an economist.

“Without ever dreaming that there would be an opportunity to really take up a true public policy research center like this, I was already naturally working in that direction,” Barnes said. “When the opportunity here presented itself, it was just a natural fit for me in terms of my own interests and passions.”

“I see this center as not just an accumulation of information for academic purposes, but I see it also as a voice of balance, a voice of honesty, so that the people can trust the information from the center,” Blanco said in a video posted to the center’s website. “I envision it as the voice of reason.”

I first got to know Kathleen Blanco decades ago when she was elected to the Louisiana Legislature. She had held no prior political office and …