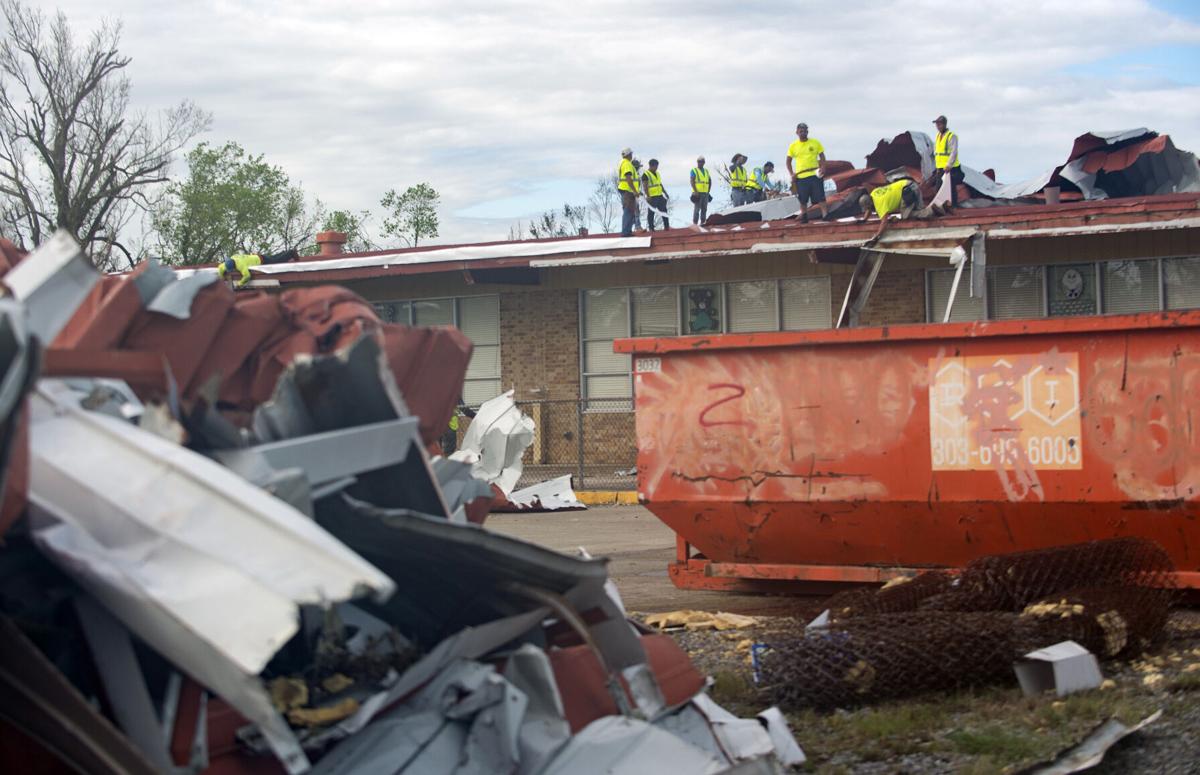 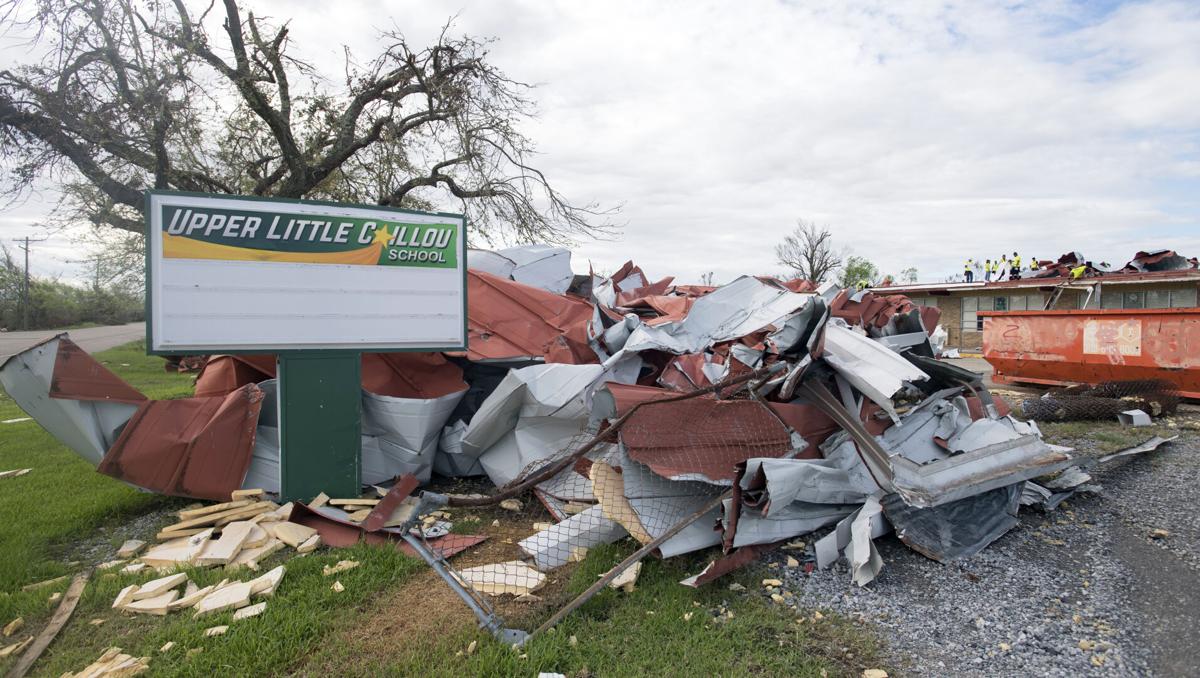 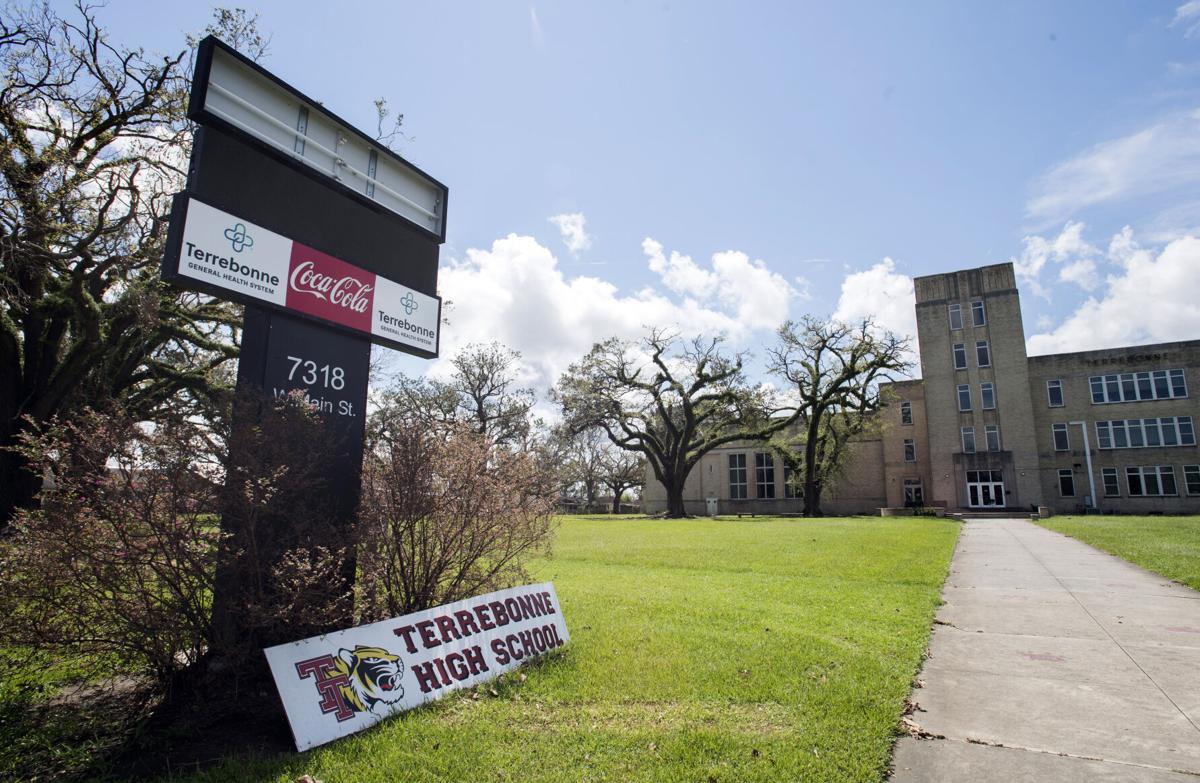 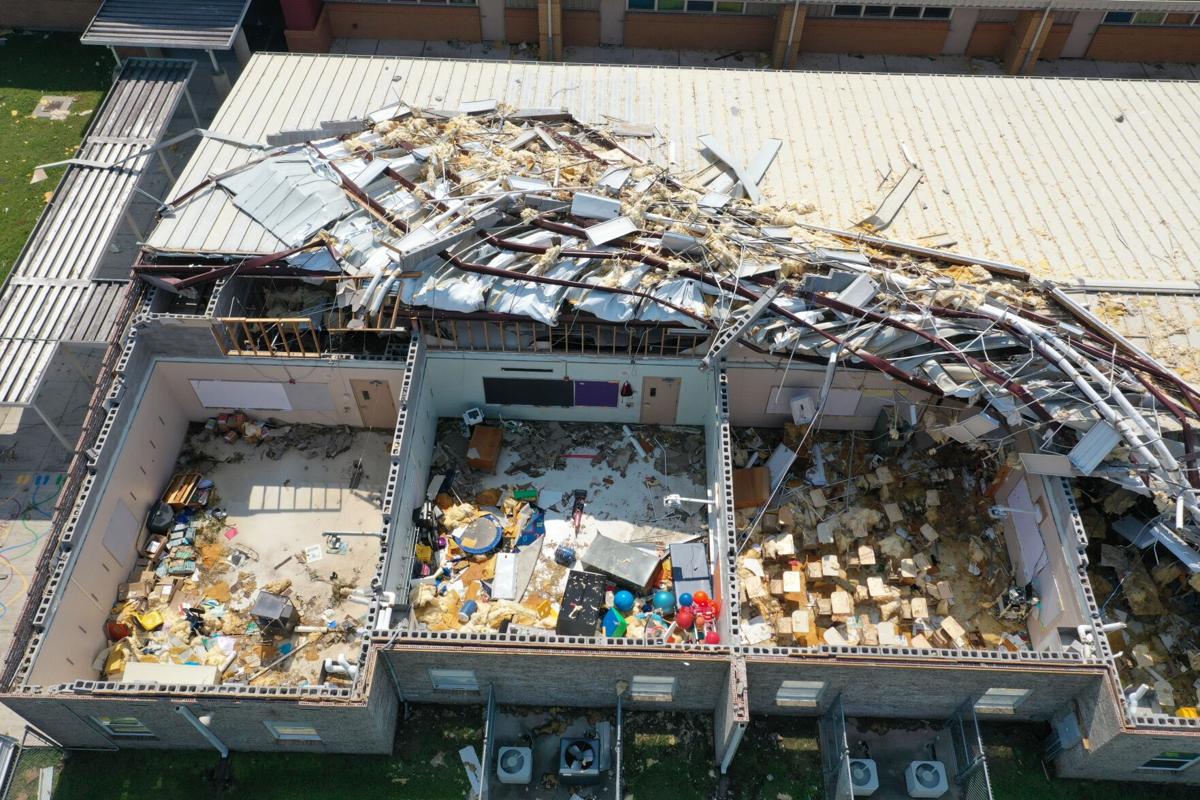 An overhead view of damage at Bayou Blue Elementary School in Houma, where the roof was pulled off several classrooms during Hurricane Ida. 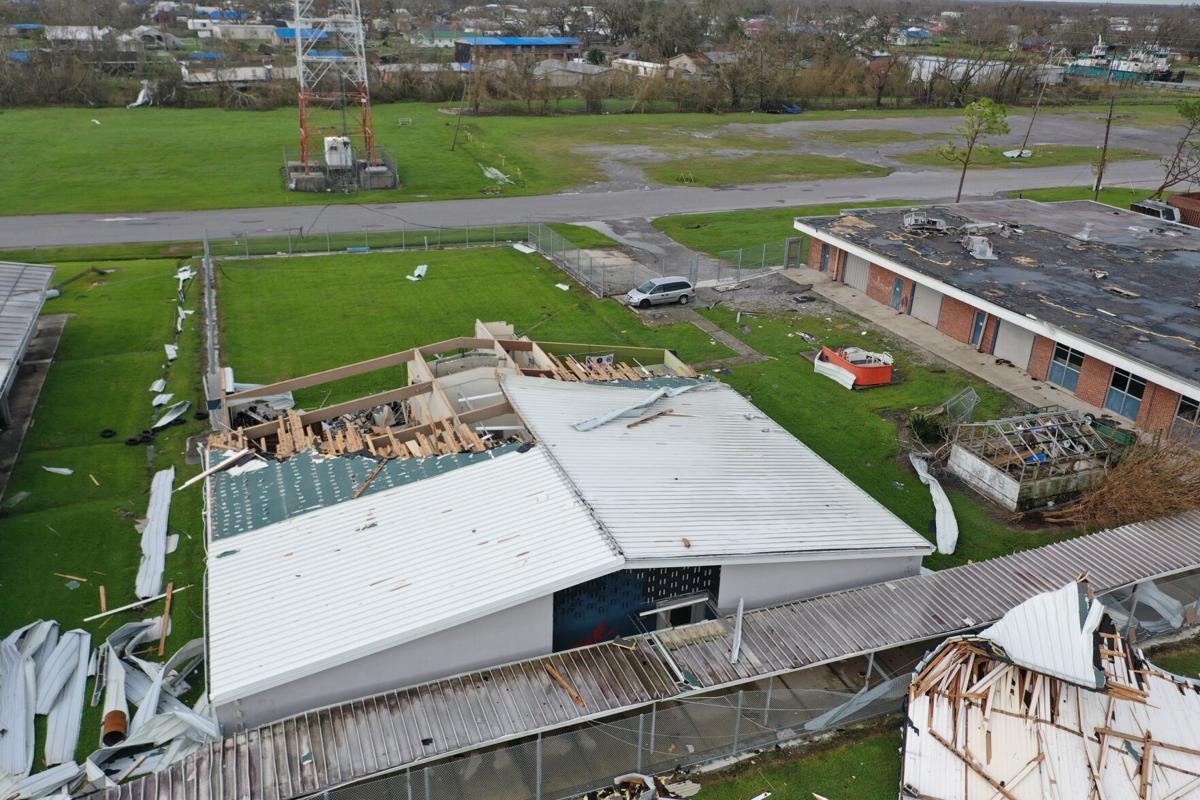 An overhead view of damage at South Lafourche High School, one of the Lafourche Parish School District campuses most heavily damaged by Hurricane Ida. 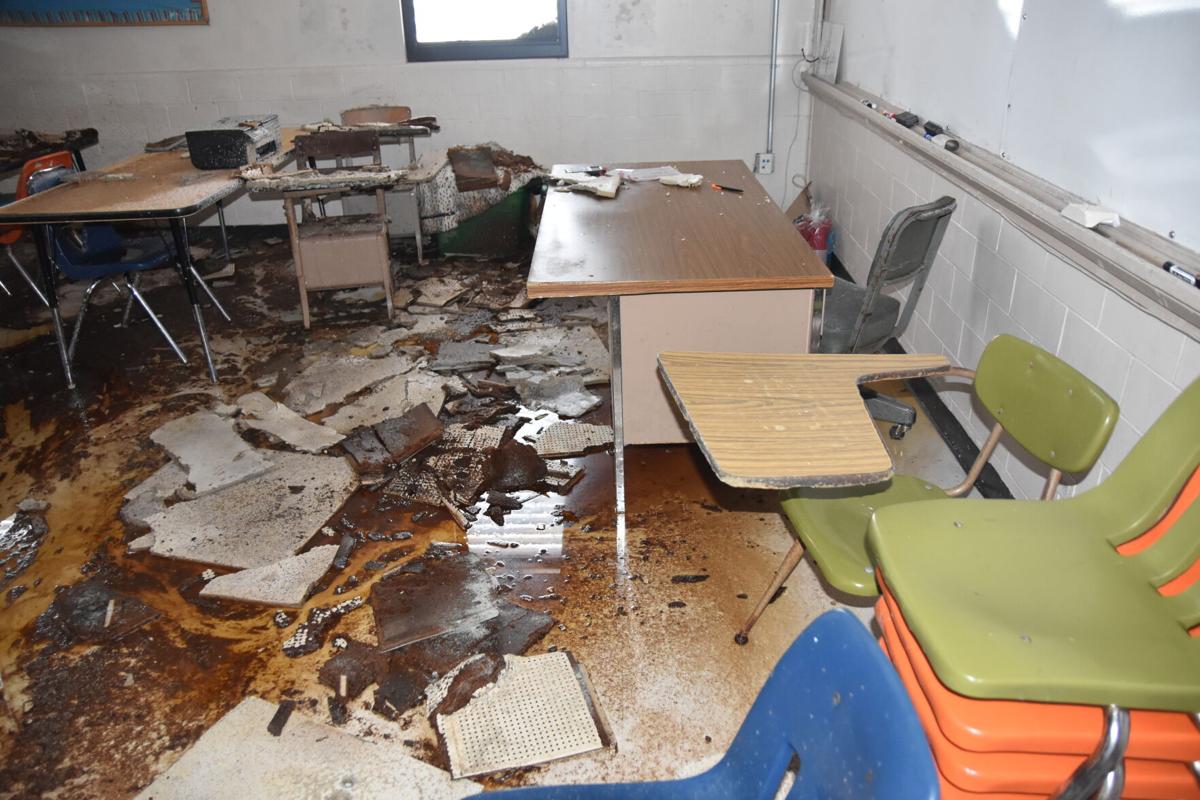 An overhead view of damage at Bayou Blue Elementary School in Houma, where the roof was pulled off several classrooms during Hurricane Ida.

An overhead view of damage at South Lafourche High School, one of the Lafourche Parish School District campuses most heavily damaged by Hurricane Ida.

In the aftermath of Hurricane Ida, Lafourche Parish School District Superintendent Jarod Martin surveyed the damage at his schools in a helicopter, gazing through the peeled back roofs of the most severely damaged buildings at exposed desks, toppled furniture and rain soaked classrooms.

The schools in Lafourche and Terrebonne parishes mirror the communities: Some schools escaped with only cosmetic damage or prolonged power outages, while others suffered severe structural damage that will require long-term repair, if the campuses are even salvageable, just like the homes and businesses of the families they serve.

Schools leaders in the region said they have one mission: to ensure the safety of schools and get students back into classrooms as quickly as possible.

How the return looks will vary by school, whether it requires doubling up on campuses, alternating campus use, transitioning supplemental spaces into classroom space, or using only livable campus space while the remainder is rebuilt, they said.

Ida latest blow to public schools, 'Never have I experienced or seen such damage'

For the third time in 18 months Louisiana public school students are engulfed in turmoil, this time because of Hurricane Ida.

What matters is that they’re present, Martin said, especially after more than a year of disrupted learning because of the COVID-19 pandemic, which remains a concern in the community.

“My concern for seniors is of course profound but my concern for a 5-year-old learning how to read is even higher. You can’t get those formative years back and those skills that we’re developing in 5- and 6-year-olds are paramount for future success. Every day that we don’t have Galliano Elementary up and running is a 5-year-old not learning how to read,” Martin said.

Leaders hope that reopening schools will provide a safe, comfortable environment for children that will offer stability and a routine in an emotionally trying time, supporting students’ physical and mental wellbeing while giving some relief to parents and freeing them to care for their personal needs post-Ida.

Darrell Domangue remembers the hurricane that ripped apart his home and his livelihood in vivid scenes as if watching a movie.

Compassion, patience and flexibility are the focus right now, Diocese of Houma-Thibodaux Schools Superintendent Suzanne Troxclair said. Nearly 30 days post-Ida, many families are still in disaster recovery mode and haven’t begun the shift into recovery; they don’t need a perfect reopening, they just need safety and support, she said.

“You rewrite the playbook every time you have something like this. The best of plans are never going to be perfect,” Troxclair said.

“We’ve got to remember these few things: compassion and common sense. Let’s just run everything through that filter first and if we can help somebody, we will,” Terrebonne Parish School District Superintendent Philip Martin said.

'COVID isn’t their priority': Bayou parishes struggle to get testing, vaccinations back on track

For Cecile Neil from Chauvin, COVID-19 became an afterthought when Hurricane Ida forced her and her younger brother to sleep in a truck for days.

Uniform regulations have been loosened and schools are working to provide uniforms to students in need, while teachers have been cautioned to relax homework policies or avoid homework altogether because students may not be living in an environment conducive to learning, he said.

“Sometimes we have to remind our administrators — don’t look at our kids’ world through your eyes, we have to look at it through their eyes because our eyes are not seeing the same thing they are...Staying in touch with the reality our community is dealing with and being responsive to that is going to be critical,” he said.

6 million meals, 280,000 tarps: How a remote National Guard base sprung into action after Ida

Since thousands of Louisiana households lost power to Hurricane Ida, basic commodities have flowed to their aid through a remote National Guar…

Each leader said they’re working with school administrators and their central office teams to try to connect employees with resources when possible, like food, generators and temporary housing, and work out employment when they’ve lost their vehicle, residence or both. Not every employee situation has a clean cut answer and many will need to be handled on a case-by-case basis, Jarod Martin said.

Reopening schools requires more than just sheer will — it’s a logistically complex process where each step hinges on the next, the school leaders said. Electricity is critical, especially to gain a full picture of damage to the campuses and support cleanup.

At the same time, architects are surveying to determine what spaces are beyond repair and what the construction picture will look like. The full picture of recovery for each district and the associated cost is still being pieced together.

“Before even making permanent repairs, I can tell you the cleanup will be in the many millions. We’ve got a team of over 200 contractors working nearly 24 hours a day to clean these buildings…Just South Lafourche High School is over 200,000 square feet,” Jarod Martin said.

If one piece falls short or completion is delayed, the reopening timeline changes, they said.

Keeping everyone informed about the shifting plans can be difficult when thousands of people still lack electricity and WiFi access, Jarod Martin said. The district can’t lean on typical districtwide text, phone and email callouts, so they’re updating their Facebook page and website frequently to give people centralized sources of information.

Lafayette schools preparing to take in displaced students; here's how to enroll in LPSS schools

Lafayette Parish schools are preparing to take in students displaced by Hurricane Ida while recovery gets underway in parishes to the east, wh…

As of Friday, eight of the Diocese of Houma-Thibodaux’s 11 schools had already returned to classes.

Generally, in each district, the damage to schools worsens the farther south you move.

Fewer than half of University of Louisiana at Lafayette students have been vaccinated by this week, according to a statement issued Wednesday …

Ellender students will move to Terrebonne High’s campus, South Terrebonne students will move to H.L. Bourgeois High’s campus, Upper Little Caillou’s grades will be divided between Village East and Montegut elementary schools, and Grand Caillou’s grades will be divided between Honduras and Dularge elementary schools, per the district’s reopening plan.

The district is getting creative to bring students back to class in the southernmost schools, with a hoped for return of mid-October between Oct. 13 and Oct. 20, per their released plan.

The Diocese of Houma-Thibodaux has schools in the Lafourche, St. Mary and Terrebonne civil parishes, and like its neighboring public school districts, the diocese saw the worst damage in more southerly schools, Troxclair said.

Students from Vandebilt Catholic High in Houma are temporarily attending E.D. White High in Thibodaux while repairs are made, students from Holy Savior Catholic School in Lockport are moving into the former St. Hilary School campus in Raceland, Holy Rosary Elementary students in Larose may move to an alternate site and St. Gregory Elementary students will use religious education spaces at St. Ann Catholic Church in Bourg as classrooms, Troxclair said.

Having the flexibility to lean on diocesan church parishes for alternate spaces has been “a game changer,” she said, as they try to get the students at Holy Savior, Holy Rosary and St. Gregory back into learning environments.

The support of students, parents, staff, parishioners and other Catholic schools nationwide who’ve offered helping hands has been key to the quick turnaround of most diocesan schools. Many students and their families turned out to help clean up debris on campuses, Troxclair said.

“When you see the devastation firsthand, it’s incredibly overwhelming. Then you have the outpouring of support from our families throughout the diocese and from communities outside the diocese who’ve come to help, and things have happened very quickly. We may show up at a school for a clean up and something that you think would take two days, may be done in two hours. People have been eager to help each other,” she said.

Research and development money at the University of Louisiana at Lafayette has soared by more than double over the past five years, President …

Philip Martin said it’s clear the district has a growing homeless student population, which did not exist before, but how many may have been forced from their homes is unknown, as well as the number that have enrolled elsewhere. Jarod Martin estimated hundreds of students have enrolled elsewhere, if not thousands, based on records requests from other districts.

“It’s very difficult to get an accurate assessment,” he said.

In less than two months, schools in Lafayette Parish have recorded more than 1,000 student COVID-19 cases, a threshold that took until the fin…