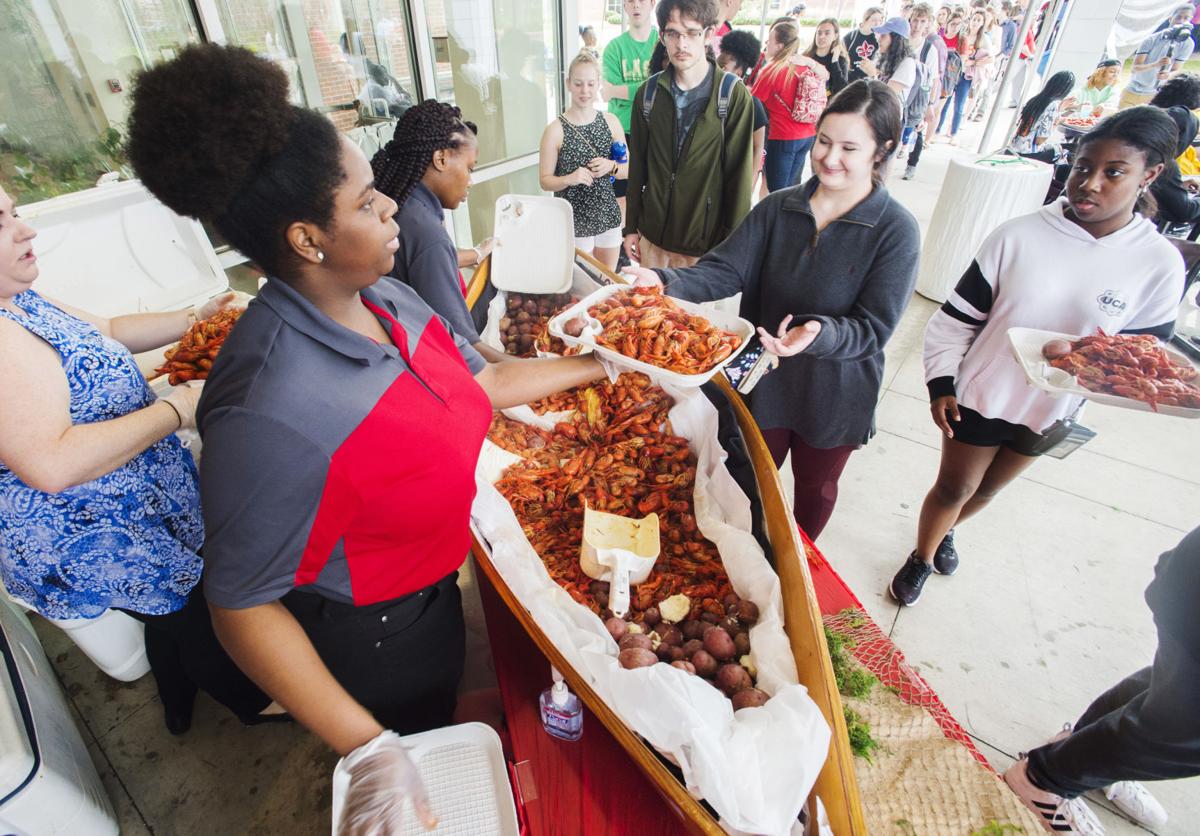 Amber Aubrey, left, serves boiled crawfish to students and other guests during the Pardoning of the Crawfish ceremony Tuesday, March 3, 2020, on the University of Louisiana at Lafayette campus in Lafayette, La. 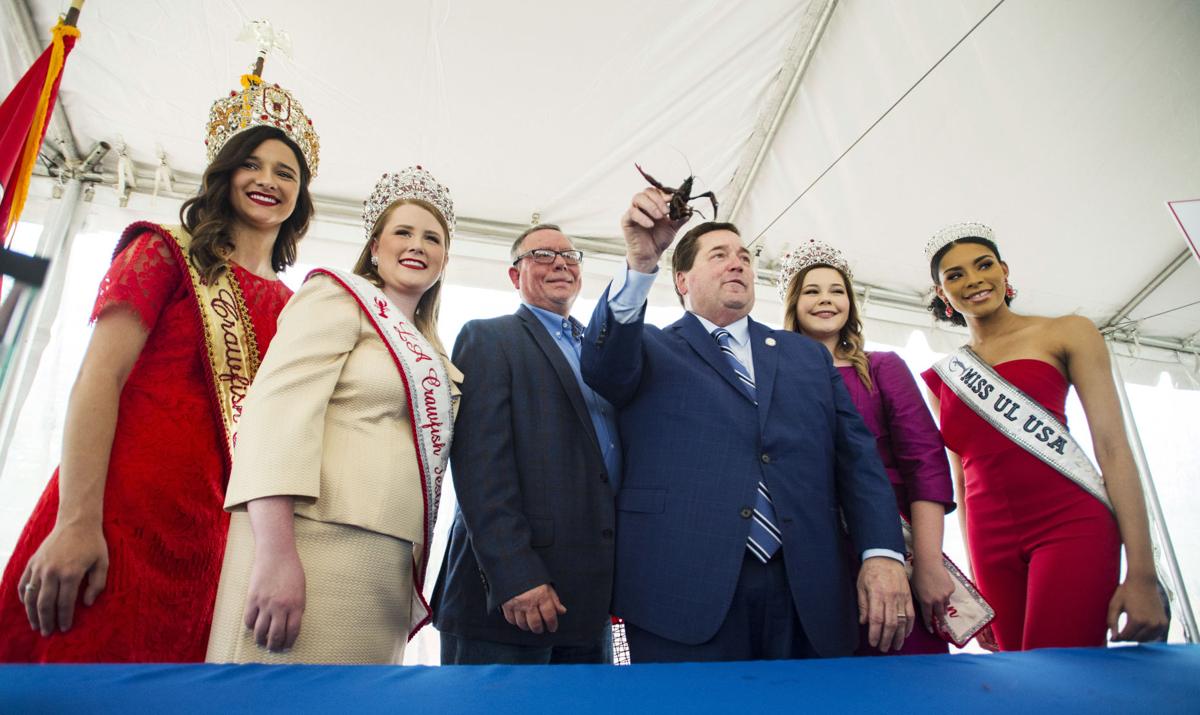 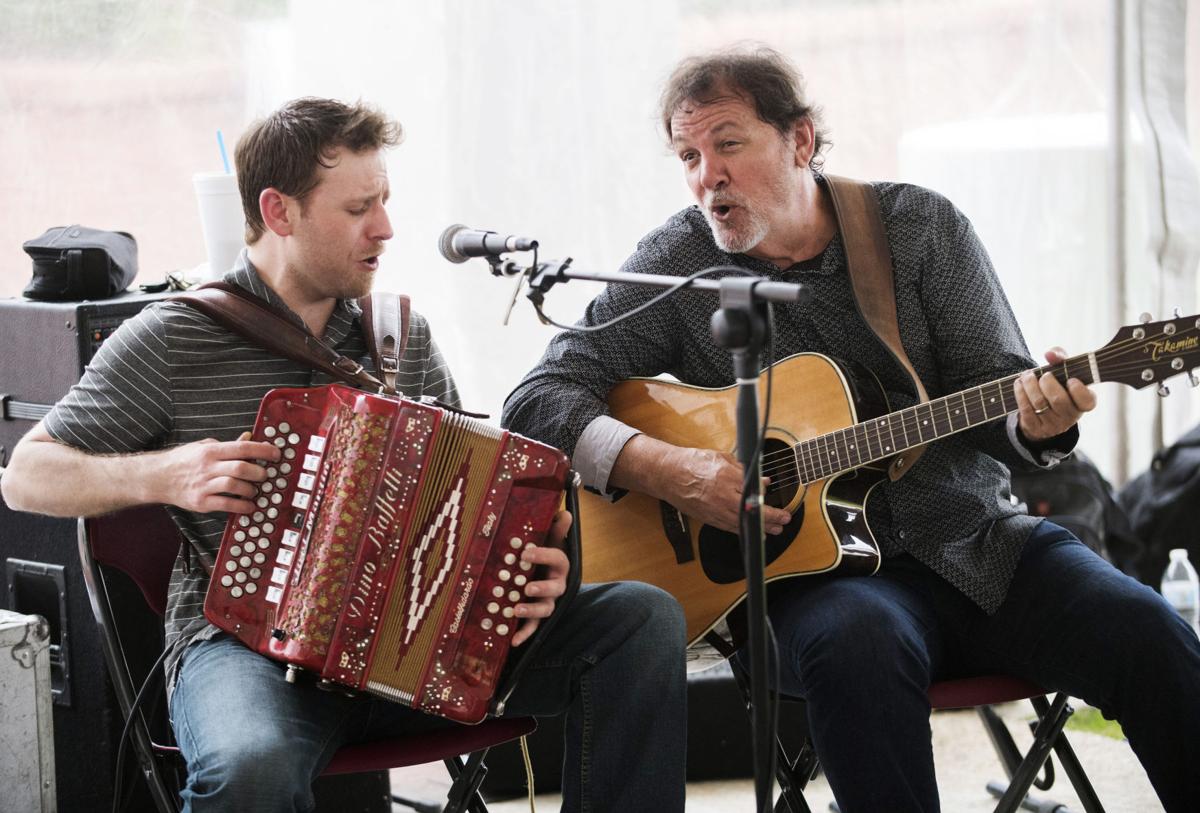 Joel Martin, left, and Chris Foreman perform during the Pardoning of the Crawfish ceremony Tuesday, March 3, 2020, on the University of Louisiana at Lafayette campus in Lafayette, La.

Amber Aubrey, left, serves boiled crawfish to students and other guests during the Pardoning of the Crawfish ceremony Tuesday, March 3, 2020, on the University of Louisiana at Lafayette campus in Lafayette, La.

Joel Martin, left, and Chris Foreman perform during the Pardoning of the Crawfish ceremony Tuesday, March 3, 2020, on the University of Louisiana at Lafayette campus in Lafayette, La.

Lt. Gov. Billy Nungesser issued a “pardon” for one lucky Louisiana crawfish Tuesday, although the Plaquemines Parish Republican said the crustacean’s family members were likely to see the inside of a steel pot full of boiling water.

It was the fourth year for Nungesser to symbolically spare the life of a crawfish, the second consecutive year that an Acadiana crawfish was spared. The fortunate crustacean was ceremoniously carried to the stage by Barry Toups to a small fish tank under a tent placed next to Cypress Lake, at the center of the University of Louisiana at Lafayette.

This year’s star crawfish was dubbed “J. Emile Verret,” in honor of a former Iberia Parish politician who served a single term as lieutenant governor under Gov. Jimmie Davis from 1945-49. Verret served on the Iberia Parish school board for almost three decades before making a longshot bid for lieutenant governor against Earl Long. He won but was defeated for re-election.

Tuesday’s event drew some luminaries in addition to Nungesser, including UL Lafayette President Joseph Savoie, who offered a litany of jokes from the stage comparing the crawfish to Louisiana politicians. Four beauty queens stood by the fish tank.

Also in attendance was Linda Rita LeJeune, 90, niece of the real Verret. She said few people recall her uncle, but she remembers him well as a kind man, married with no children, who took special care of his nieces and nephews during the Great Depression years and beyond. Verret lived near St. Peter’s Catholic Church. She accepted a proclamation from Nungesser before the crowded drifted nearby to the site of a crawfish boil — 600 pounds of crawfish prepared — that marked the occasion.

In prepared remarks, Nungesser, who heads up the state’s tourism efforts, said Louisiana enjoyed a record year with 51.3 million visitors and $1.9 billion in sales taxes generated by visitors. Part of the state’s allure, he said, is Louisiana’s music, food and culture, but also the friendliness with which it greets visitors. The record numbers, he said, belong to the Louisiana people who help lure visitors here.

Prior to the event, Nungesser said in an impromptu interview that he expects the state to enjoy good tourism numbers despite the threat of coronavirus that has reached America. As of Tuesday afternoon, he said, there were no cases in the state and he said Louisiana has a good plan for dealing with the virus.

He urged Louisianians to vacation in state this year, “staycations” that would enable people to sample areas of Louisiana with which they are not familiar. He said his own family visited Natchitoches in 2019, and were delighted with their visit.

There are “hidden gems” for tourism, he said, including the Chemin-A-Haut State Park in Morehouse Parish, and the “gothic jail” in Deridder and The Myrtles in St. Francisville.

The panel was part of Reset Louisiana's Future, a one-day program presented by the Public Affairs Research Council, CABL and the Committee of 100 for Economic Development. The program was the initial public program offered by the Kathleen Babineaux Blanco Public Policy Center at The University of Louisiana at Lafayette.

Testing for coronavirus slow to ramp up in Louisiana, here's why

Louisiana officials have only confirmed testing one patient for the novel coronavirus that has begun spreading throughout the U.S., mainly bec…